Grocery store owners are making huge profits — frontline employees, not so much 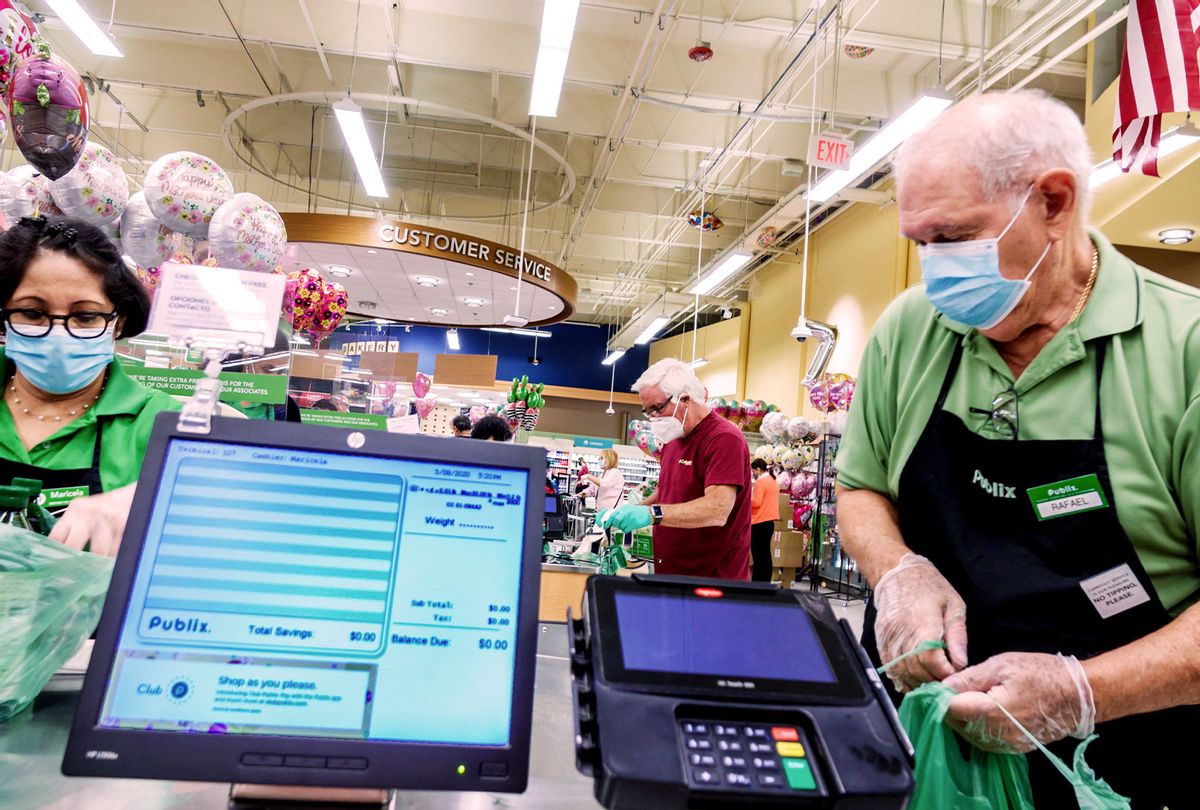 Beyond its other savageries, the nearly uncontrolled spread of COVID-19 throughout the U.S. has thrown sectors of the food service industry into freefall. The National Restaurant Association puts the damage at 110,000 restaurants closed in 2020 — about one of every six in the country — and employment in that sector remains 2.1 million people below pre-COVID levels.

But one area of food service is experiencing staggering growth, perhaps unrivaled by anything the industry has ever seen. If you own grocery stores, and preferably lots of them, your profits have skyrocketed — and that ascension appears poised to continue for months into 2021.

So are frontline grocery workers being cared for and protected during this unprecedented run-up in valuation and profit? By almost every available metric, the answer is a resounding no.

A recent report from the Brookings Institution throws these truths into bold relief. The 13 top retailers in Brookings' analysis have earned an average of $16.7 billion in extra profit this year — a 40% increase over 2019 totals — while their stock prices shot up by an average of 33%, the surge driven in many cases by grocery sales. Yet the average frontline retail worker in those companies saw a pay increase of just $1.11 an hour, about 10%, and hadn't received any new hazard pay in more than four months. Most of those top retailers feature groceries as a significant part of their business models.

The bottom line: As the public shies away from restaurants or is forced by local ordinance not to dine out, corporate grocery owners are making a killing. The people who make those stores run, meanwhile, have largely been left behind.

That reality has prompted two California cities to act. Last week, the Long Beach City Council voted to draft an emergency ordinance mandating $4-per-hour wage increases for grocery workers for at least the next 120 days. And Los Angeles councilmembers introduced a motion to require a $5 per hour pay hike for grocery workers in the city. It could come up for a vote as soon as Jan. 12.

"We are at a critical moment in this crisis, when things are far more serious than at any other point this year," Long Beach Councilwoman Mary Zendejas said during a recent meeting. "We know that some of the people most impacted by this pandemic are frontline workers, and among those most vulnerable right now are the grocery store workers."

The numbers bear that out. According to the Los Angeles Times, new outbreaks of the coronavirus have been recorded at multiple grocery locations within the county. At a Food 4 Less in Palmdale, 21 employees recently tested positive, per county records, and the newspaper said several new outbreaks have been reported at large chain stores — some Whole Foods and Trader Joe's locations among them — as well as smaller grocers. (An outbreak is defined as three or more cases among staff within a 14-day period.)

In both Long Beach and Los Angeles, the council motions are aimed at these larger grocers, which employ 300 or more people nationally. One such company is Cincinnati-based Kroger, which operates dozens of Ralph's and Food 4 Less locations in the greater L.A. area, including the store in Palmdale.

Counting third-quarter earnings, Kroger's profit overall was up 100% compared with 2019. That's extreme by any standard, but across the board, it has been a huge year for companies that are either completely or substantially grocery oriented. According to Brookings, profit at Albertson's (which owns Vons in Southern California) was up 153% through just two quarters, while retail giants Walmart (up 45%) and Amazon (up 70%) have used their extensive grocery offerings to help substantially boost sales and profits.

The idea of hazard pay for grocery workers — companies called it "hero pay" at one point — essentially came and went. While an hourly bump was common among retail giants and local grocers early in the pandemic, those raises went away months ago, and only a few companies have done much to either protect workers or compensate them for their risk as it has grown and multiplied.

Brookings put Best Buy, Target and Home Depot in its "leaders" category for their continued support of front-line workers in the form of bonus pay and some permanent wage increases, with Target notable for its growing share of the grocery market. The same analysis dinged Amazon and Walmart as among the "least generous" of the behemoths, noting that Amazon, which owns Whole Foods, "could have quadrupled the hazard pay they gave their frontline workers and still earned more profit than the previous year." Kroger fell into the "laggards" category, in part because it has been six months since its workers received any hazard pay.

Retailers aren't often shamed into paying employees more, of course, which explains why Long Beach and Los Angeles leaders felt compelled to act. But with cases of COVID-19 on the rise among grocery workers, "Our members are scared," Priscilla McDermot, a spokeswoman for the Long Beach division of the United Food and Commercial Workers union, told the Los Angeles Times. (Disclosure: The union is a financial contributor to Capital & Main.)

From nearly the start of the pandemic, grocery employees — and many other front-line workers — have shared stories of customers who refused to mask up or keep a safe distance while shopping. "We don't really have any authority to tell them what to do," a Northern California grocery worker told Capital & Main. "They (store owners) don't want to scare off business. So we just try to stay as safe as we can."

The workers are doing so for a wage that has increased in 2020 at a mere fraction of the soaring rate of profitability for their parent companies, and with "hero pay" that long ago vanished as a concept. Only at the point of a local ordinance is such pay likely to return.