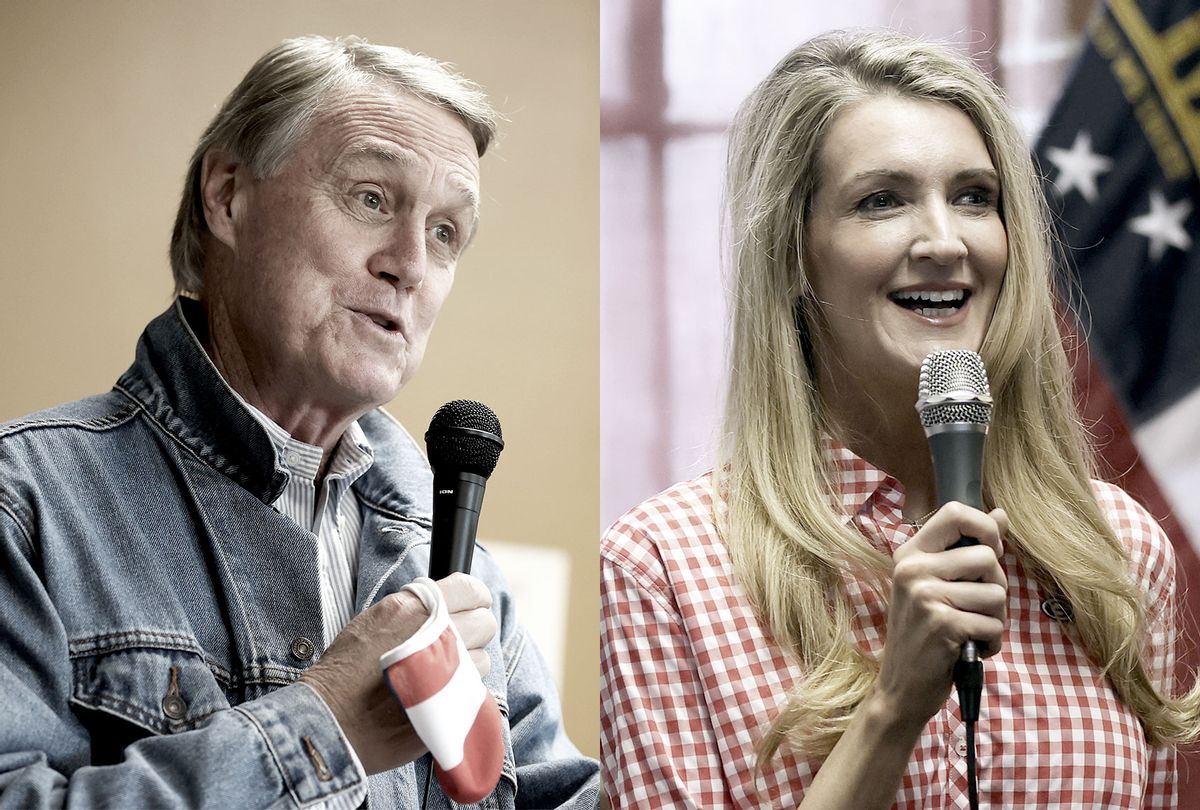 Voting rights groups are warning that early voting site closures in Georgia are limiting Black and Latino turnout in the state's two highly-anticipated Senate runoff elections even as a federal judge on Monday ordered two counties to reverse a decision purging more than 4,000 voters from the rolls.

Election officials in Hall County, which is located about an hour northeast of Atlanta and includes Gainesville, have opened four early voting sites, down from eight locations in the November election. The county is home to more than 200,000 people, nearly 40% of whom are Latino or Black. Multiple advocacy groups said that the closures were centered in areas with large Black and Latino populations, HuffPost reported.

"This is what voter suppression looks like," Tania Unzueta, the political director of the Latino voting rights group MiJente Support Committee, said during a conference call with reporters. "This is one example of what we don't want to happen, particularly in an important runoff."

It was Abrams' sister, U.S. District Judge Leslie Abrams Gardner, who ruled that two other Georgia counties improperly moved to remove a tranche of voters' names from their rosters without proving that the voters had actually given up Georgia residences.

"Republicans do not know how to win without voter suppression as one of their tools," Stacey Abrams told CNN after her sister's ruling.

"Voter suppression is their modus operandi," Abrams, the founder of the nonpartisan voter access-group Fair Fight, explained. "It is not a partisan effort; it is a people effort. We will stay hard at work through Fair Fight … in Georgia and around the country to defend the right to vote and to defend access to the right to vote."

Nearly 1.9 million voters have already cast ballots in the election, almost half of all the early votes cast in the general election, according to The Associated Press. But Michael Pernick, an attorney for the NAACP Legal Defense Fund's voting rights project in Georgia, said turnout in Hall County was just 13% as of Tuesday, well below the statewide numbers and the county's early turnout rate in the November election, according to HuffPost. Some voters have shown up to the wrong locations after using them to vote in November, according to WXIA-TV.

"We know this because turnout is up in almost every other county in the state, but not in Hall," he added. "This isn't theoretical or hypothetical."

"We are especially concerned that these closures harm Hall County's Latino and Black voters because many of the locations are in Latino and Black communities," the letter said, noting that voters in a Latino community that lost an early voting site would now have to travel more than seven miles to a location that is not served by public transit.

"This community, they're enthusiastic to vote," Elton Garcia of the Georgia Latino rights group GALEO, said according to HuffPost. "But this closure of early voting sites adds another barrier."

Jerry Gonzalez, the group's CEO, said that the county has refused their request and also declined to offer bilingual voting guides or Spanish interpreters.

"Hall County has consistently chosen to make things more difficult," he said. "Every opportunity the county has had to expand access to voters, the county has chosen not to do that."

President Donald Trump carried the county with more than 70% of the vote in November but the groups argued their requests weren't partisan.

"We care about Latino voters, whether they're Democratic or Republican," Miranda Galindo, an attorney for the voting rights group LatinoJustice PRLDEF, said according to the report. "This is about voter suppression of an entire community of minority voters in Hall County."

The groups previously focused on Cobb County, where more than 40% of the roughly 750,000 residents are Black or Latino. President-elect Joe Biden carried the county by about 14 percentage points. County officials opened just five early voting sites, down from 11 in the November election. The advocacy groups argued that many of the closures were in heavily Black and Latino areas.

County officials said they did not have enough trained staff to maintain more early voting locations but the advocates argued that the closures had resulted in diminished turnout.

"During the first couple of days of early voting, the data has shown that the harm to voters remains severe, Cobb County has had extremely long lines — in some cases as long as two hours. At the same time, the overall turnout in Cobb has gone down," Pernick told NBC News last week, even as turnout surged in other counties.

After the county agreed to add two more early voting locations by December 28, the groups sent another letter to county officials arguing that data showing long lines to kick off early voting means that the "steps taken by the County were insufficient and the decision not to keep more advance voting locations open is making it more difficult and less safe for Cobb County voters."

The data, the letter said, shows that voters regularly experienced two-hour wait times, "significantly longer than in other major metro counties," while the number of votes cast at the available voting sites had increased by as much as 50%. Despite the long lines, the groups said, the county's turnout rate was just half of that in nearby Fulton and DeKalb counties.

The lawsuit argued that Bibb, Clarke, Houston, and Paulding counties were not offering early voting on Saturdays, as required under state law. Election officials argued that the law only requires weekend voting in primary and general elections, not runoffs.

"With control of the U.S. Senate hanging in the balance," Democracy Docket said in a statement, "Republicans are already making a concerted effort to suppress the vote in Georgia."