The sustainability challenges that threaten the agave industry 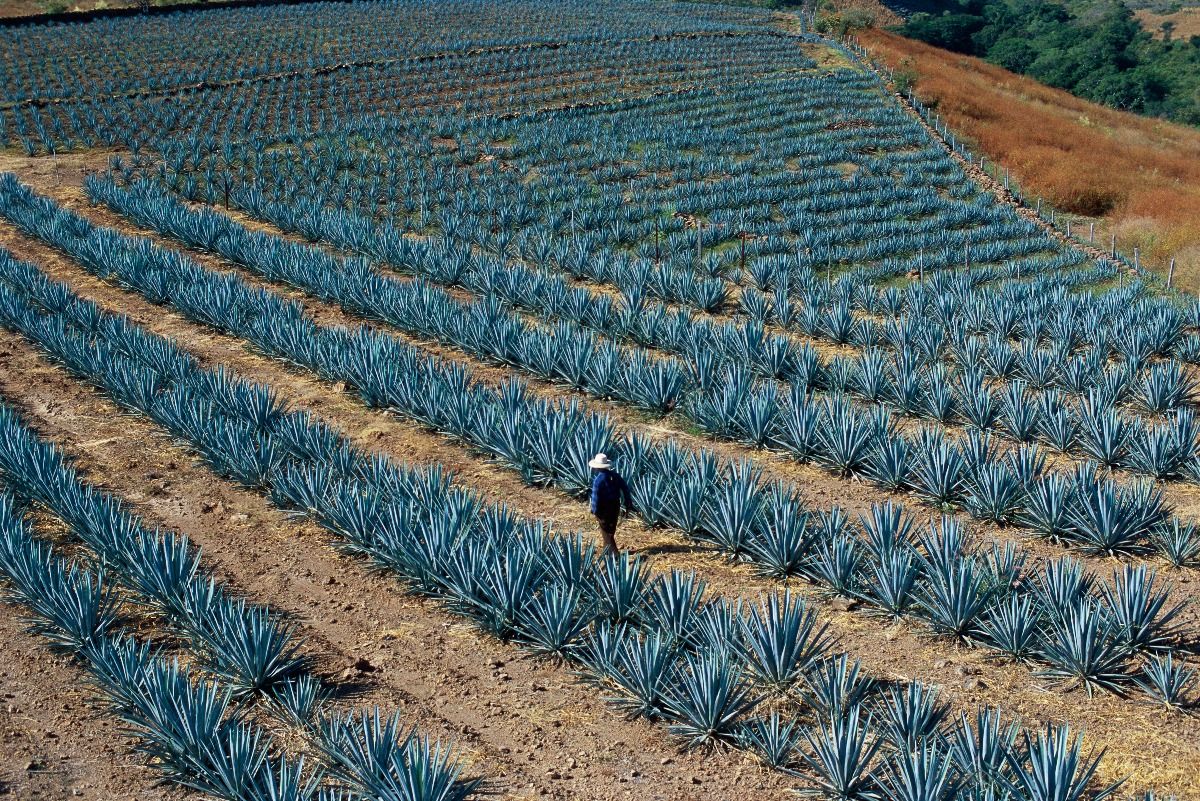 For many Americans, the word "agave" conjures up thoughts of tequila. And for some, it's not a pleasant association — even the good stuff can be a little too reminiscent of low-grade party fuel and terrible hangovers. Even as artisanal and celebrity-made tequilas become more popular (aided by at-home pandemic drinking), the unfortunate reputation persists.

Beyond cheap liquor, however, agaves are a source of many products: You may have experimented with agave nectar in baked goods or had the pleasure of sipping a complex and smoky mezcal. Agaves are also strikingly beautiful plants with a complex life cycle and an intricate relationship with some unexpected pollinators. If you live in a warm part of the country, you may even have a plant growing in your yard.

Between a growing interest in nectar and a booming artisanal spirits market, demand for agave products is at an all-time high. Unfortunately, this growing demand has led some farmers to turn to environmentally taxing production methods which have stressed the already volatile agave market, threatening the agave industry's survival.

From sap to syrup and spirits

Agaves are spiny desert plants native to Mexico that grow slowly, storing sap in their core for years until blooming a single, towering stalk of flowers before death. Typically, agaves are harvested right before they flower, the point when the plants have stored the most sap. It's the sugar-rich cores – called piñas for their resemblance to pineapples — that are harvested, cooked and pressed to release a rich syrup that is processed into nectar or fermented into alcohol.

Purified syrup from the agave sap is sold in the US as agave nectar, even though it doesn't come from agave flowers like the name might suggest. Agave nectar has gained popularity as an alternative sweetener, specifically as a vegan alternative to honey, as it has a similar ratio of fructose, glucose and other sugars. Experts debate whether it has health benefits above other sugars — it's naturally high in fructose, which makes it sweeter than other sugars per calorie, so people might use slightly less of it than other sweeteners. Food companies tout the fructans in the nectar as a natural source of fiber, but some nutritionists warn agave nectar is nearly identical to the much-maligned high fructose corn syrup. Regardless of its health effects, the market for agave nectar is projected to keep growing.

However, the main driver of agave demand is alcohol. The Aztecs fermented agave sap into a milky alcoholic beverage called pulque. It's still consumed in Mexico but has limited appeal abroad. It's unclear whether distillation was practiced by ancient Mesoamericans or if it was introduced by Spanish colonists, but distilled agave spirits are now consumed worldwide. Tequila, which is made only from the blue agave, is the most popular. A smokier kind of agave spirit, mezcal, is made from a wider range of agave varieties, some wild-collected and some cultivated.

Tequila consumption outside of Mexico has traditionally been driven by lower-quality spirits used in cocktails like the margarita, but artisanal and high-quality tequilas have become far more widespread in recent years. The explosion of artisanal tequilas has contributed to rapid growth in the tequila market, with sales nearly quadrupling since 2002. Mezcal is also booming in popularity: Imports to the US surged 50% in 2019, overtaking consumption in Mexico itself.

The dramatic rise in demand for agave products of all kinds has significant consequences for the farmers who grow it. Because the agave plant matures so slowly — seven years in the case of the blue agave, and more for many others — prices are prone to natural boom and bust cycles.In years when many plants mature at the same time, prices have fallen as low as two pesos per kilo of agave. When demand is high but there are few mature plants on the market, however, they can rise to 25 pesos per kilo or higher. At the moment, the market appears to be heading out of a high-demand, high-price period so severe that many agave industry analysts sounded the alarm over a potential tequila shortage.

These spikes might sound lucrative, but it's hard to take advantage of this cycle; consumer demand is constantly shifting, and agave growers can't change what they're planting as quickly as farmers who grow annual crops like corn. Planting more agaves in a year when prices are high might only make a future glut that much worse. Some turn to harvesting immature plants, which contain far less sugar. Not only does this early harvesting mean lower-quality syrup, it also prolongs shortages and leaves farmers worse off, since it's effectively borrowing plants from the future. These market disturbances can ultimately force farmers off the land: The number of agave farmers went from 15,000 in 2000 to 8,000 after a particularly dramatic cycle in 2007.

The booming market for agave products and the accompanying price roller coaster have serious environmental consequences. Mezcal makers have responded to the drink's meteoric rise by ramping up their collection of the wild agaves, alarming environmentalists who fear the slow-growing populations may not be able to recover. This isn't an issue for tequila or the majority of commercially available agave nectars because they use only cultivated blue agaves, but those growers have ramped up chemical use on the farm to keep up. The practice of early harvesting has also become more common, and this presents another challenge by removing a critical food source from the desert: the agave's flowers.

To protect against the drying effects of the sun, many desert plants open their flowers only at night. This makes bats an important pollinator in the desert, and plants often have special pollinator relationships with only one species of bat. This is true for agaves, which rely almost entirely on long-nosed bats for pollination. With their long tongues, the bats are one of the few animals that can access nectar from the agave's tubular flowers.In return, they spread the agave's pollen from flower to flower. Bats are one of the only ways wild agaves can reproduce — plants exposed to bats produce nearly 3,000 viable seeds for every seed made by a plant that wasn't.

Cultivated agaves don't technically need pollination; most are grown from small offsets off a mother plant. But these offsets are technically clones, and while this ensures a field of plants that all have the same characteristics which will produce an even and predictable product, the technique comes at the cost of genetic diversity. When bats are allowed to pollinate plants, genes combine in unique ways, and many beneficial traits — like disease resistance or drought tolerance — can emerge. Large, genetically identical fields are potentially vulnerable to being wiped out all at once by pests or disease. This has already happened in the past: a wave of fungal infections in the mid-1990s swept through cloned blue agave fields and sent prices skyrocketing. Ironically, the subsequent push to replant all the lost crop at once sparked an oversupply of agave years later and sent prices toppling.

Unfortunately, early harvesting isn't the only threat facing the bats: Drug traffickers along the US-Mexico border use the caves where bats roost as hideouts and caches for shipments, disturbing the animals' nesting. Ranchers trying to eliminate vampire bats, which nest in the same caves as long-nosed bats, also intentionally destroy the nesting habitat.

So far, efforts to preserve the bats have seen some success. Careful coordination between US and Mexican governments has helped to protect their remaining nesting sites, and the long-nosed bat is now the only bat species to ever be removed from the US endangered species list.

Some agave producers are also taking action. It turns out that preserving enough agaves to feed the bats doesn't take a huge shift: Allowing just 5% of the agaves used in tequila production to fully mature and flower could support more than 2 million bats. A number of growers and distillers have signed on to do this through the Tequila Interchange Project, producing spirits under the Bat Friendly label. It's been a success so far, with bats returning to the field and pollinated plants producing viable, genetically variable seedings.

The project is an encouraging start for the bats and biodiversity, but it's limited in scope: It's hard to convince growers to sacrifice a little sap by harvesting plants past their prime, so most haven't joined. It also doesn't address other agave products like nectar. And while the project successfully resolves some of the issues of early and overharvesting, it doesn't solve the boom and bust cycles that they're rooted in. That's a more complicated problem, and one that agave growers have tried to find their way around for some time.

A few of the major distilleries like Patrón have started to issue price guaranteed contracts to producers, but these are still rare and tend to go to larger farms. Although most farmers don't make their own tequila, those that do have the option to hold on to the spirit when prices are low — a strategy aided by a push from distillers to label highly aged tequilas as extra añejo and sell them at a higher price, even if extensive aging isn't traditional for most agave spirits.

For smaller growers who don't distill their own agave, however, these options are out of reach. They're left to diversify their income stream with a wider range of crops and livestock, planting agave when they can afford to and hoping it matures in a year where prices are good. This kind of approach may ultimately be the most sustainable for smallholders, and it creates a more biodiverse farm ecosystem that's both more resilient to harsh, dry conditions and better for wildlife.

So what does this mean for people who want to buy sustainable agave products? USDA organic is a good place to start for avoiding chemical use and associated environmental problems, but it doesn't address pollinator issues or help farmers weather periods of low prices. Fair Trade certification, which is available for some agave nectars and spirits, carries better guarantees about farmer compensation, and the bat-friendly spirits recommended by the Tequila Interchange Project are a good way to invest in conservation. Ultimately, it's important to recognize that the issues of the agave industry are broad and interconnected enough that shoppers can't solve them just by choosing a particular label or product. While customers demanding sustainability guarantees may help push producers in the right direction, the agave industry's own survival depends on finding a sustainable way to meet demand.