The history of crêpes: A personal and historical exploration of the famous French pancake's origin

Nearly every culture on earth lays claim to some kind of pancake, made from a liquid batter on a hot, flat surface 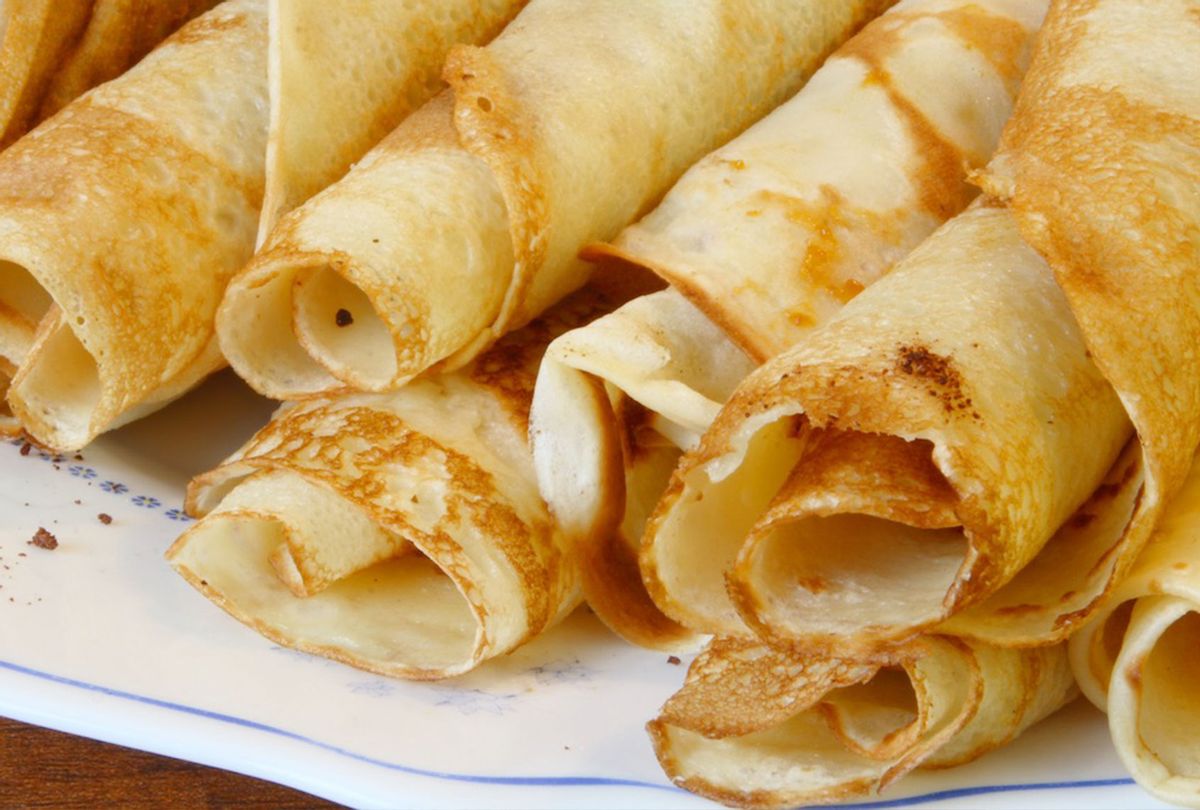 Crepes (Photo courtesy of the Institute of Culinary Education)
--

Crêpes are an ultra-thin pancake common in France that can be made sweet or savory, typically rolled or folded with a variety of fillings from jam or Nutella to ham and cheese to seafood. The specialty is served in crêperies, as street food, and even in elegant settings as dessert, such as the most famous presentation, Crêpes Suzette.

Common as they are in France, it never occurred to me while growing up that crêpes were typically not made in other Midwestern households in the 1980s and '90s. When the occasion presented itself for my dad to make dinner, it usually meant my siblings and I would be having "roll up pancakes" — so named because they were easily rolled into a tube with the tines of one's fork. They were served — as any other pancake would be — with butter and maple syrup. All I knew is that we sometimes got what amounted to breakfast for dinner, bordering on dessert for dinner, and that these pancakes were so thin that nobody cast a side eye when you went in for a half dozen or more. Ignorance was bliss.

I didn't make the French connection between crêpes and that which had occasionally graced my dinner table until my early 20's when I started venturing out of my hometown. Crêperies had barely made their way to American cities at this point, much less to America's heartland. Furthermore, I'd only ever known them as roll up pancakes, unaware that their pedigree might go beyond standard American breakfast — or dinner — fare. So, how did these exotic specimens end up on my Midwestern dinner table circa 1985? Another clue was in my father's heritage.

My dad reports that his recipe for crêpes came from none other than the Good Housekeeping Cookbook, the same recipe his mother used. (Why he never used the real name to us is a matter for another day.) Still, why would my grandmother, a Midwesterner for at least several decades, have been seeking out such a recipe, which was otherwise unheard of among our friends and neighbors? Perhaps the fact that her birthplace was Canada was important. Quebec, to be specific, the only spot in North America where the official language is French. One doesn't need a DNA test, only elementary French vocabulary, to gather that my French surname reveals a distant past in French cattle management.

Nearly every cultural cuisine on earth lays claim to some kind of pancake, made from a liquid batter on a hot, flat surface. Those we know well from hearty American breakfasts have near and distant cousins: Dutch poffertjes, Indian dosas, Russian blini, Japanese hirayachi, Chinese jianbing and French crêpes, among others.

The etymology for most western-style pancakes, both thick and thin, tends to come down through one of two major pipelines. The Greek tiganos, meaning "frying pan," passes on its DNA through various languages with dishes of this nature that literally translate to "pan cakes," including American pancakes as well as Norwegian pannekake, Argentinian panqueques and South African pannekoek. The Latin crispa, meaning "creases," gives parentage primarily to thinner, folded-style pancakes from which French crêpes, along with Mexican crepas and Turkish krep, take their lead.

In French folklore, there is a tale that crêpes were born of a "happy accident," when a 13th-century housewife in Brittany accidentally spilled some buckwheat porridge from a kettle in the fireplace onto a flat cooking stone, but other sources put crepes much earlier on the timeline. Le Jour des Crêpes ("the day of crêpes"), Feb. 2, is believed to have begun in the year 472 when crêpes were offered to French Catholic pilgrims visiting Rome for Candlemas by Pope Gelasio I. Now, Le Jour des Crêpes and Candlemas are synonymous occasions in France and Belgium, where crêpes take on additional meaning, their circular nature symbolizing either a coin or the sun. As to whether Brittany, the Northwesternmost region of France, lays any actual claim to the origin, some credibility can be concluded from the fact that savory crêpes are still traditionally made with buckwheat flour, a crop that performs well in Brittany's wet climate, where normal wheat does not.

French crêpe batter typically consists of flour, eggs, and milk or water, with butter, sugar and salt as optional ingredients. Brown butter gives an especially deep flavor, and I swear I recall my dad adding a splash of vanilla extract. No matter the recipe, a brisk whisking for removing any lumps is required, and resting the batter for at least a short while to let air bubbles subside is recommended. Crêpes differ from typical American pancakes in that they don't contain a leavening agent causing the batter to rise, hence the flat outcome.

Crêperies now can be found all over the U.S. and the world, meaning other kids whose dads are fond of making roll up pancakes might be able to better contextualize them. Crêpes took on further life in the U.S. starting around 2001, when Emy Wada, a Japanese pastry chef who'd studied in France, introduced a mille crepe cake at her New York City bakery, Lady M Boutique. Mille crêpe literally translates to "thousand crêpes" though the cake tops out around 20 crêpes layered with pastry cream.

While we know much about British involvement in North America through the 1700s, France controlled a large swath of land from Northeastern Canada, through the American Midwest, and down to Louisiana, until much of the latter part was ceded to Great Britain in 1763. French influence lingers in American city names such as Detroit and New Orleans, and especially in Quebec, which has remained a new world French mainstay, and through that heritage, crêpes became part of my Midwestern upbringing.

By Pamela Vachon, Institute of Culinary Education alum and writer