What is the “Molten Ring” that Hubble saw?

Astronomers say the Molten Ring is a terrific example of an "Einstein ring," caused by gravitational lensing 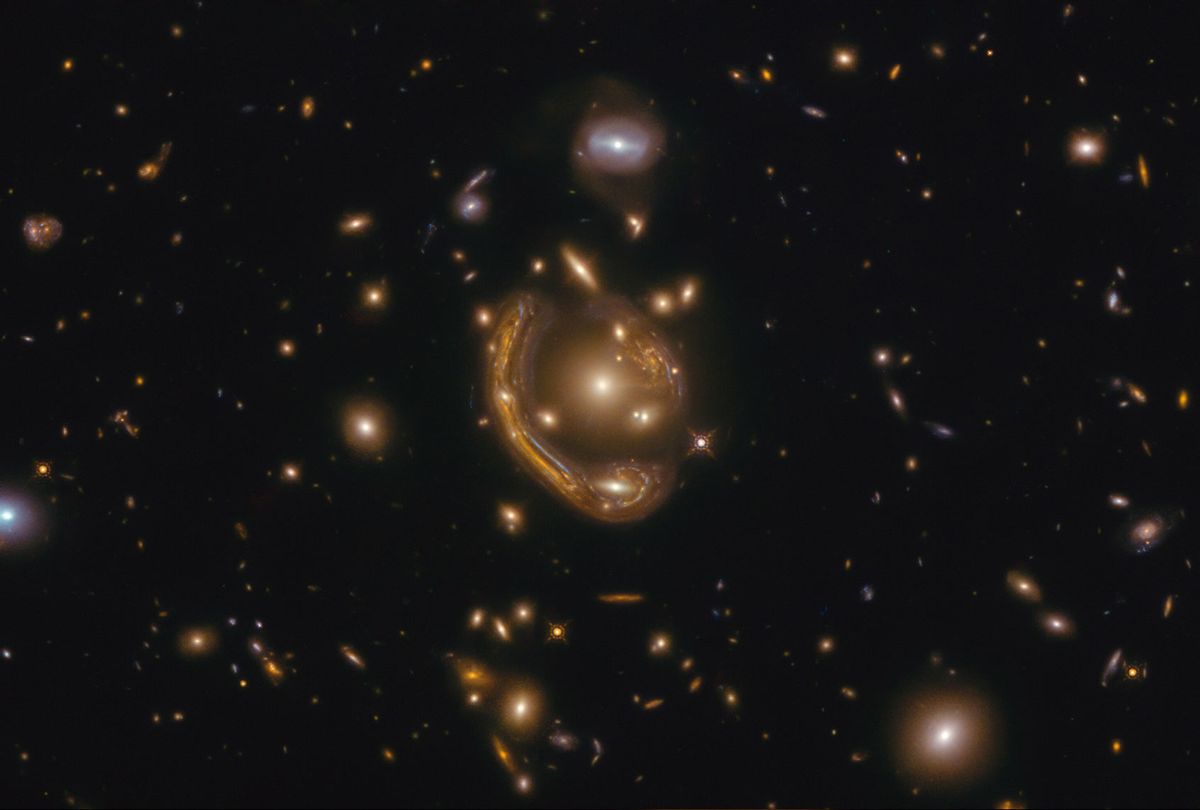 The narrow galaxy elegantly curving around its spherical companion in this image is a fantastic example of a truly strange and very rare phenomenon. This image, taken with the NASA/ESA Hubble Space Telescope, depicts GAL-CLUS-022058s, located in the southern hemisphere constellation of Fornax (the Furnace). GAL-CLUS-022058s is the largest and one of the most complete Einstein rings ever discovered in our universe. The object has been nicknamed by astronomers studying this Einstein ring as the "Molten Ring," which alludes to its appearance and host constellation. (ESA/Hubble & NASA)
--

On December 14th, Hubble Space Telescope officials revealed striking images of an astronomical phenomenon called the "Molten Ring." The object, which appears as a golden arc stretched across a dense cluster of stars, is one of the largest and most complete Einstein rings ever discovered in our universe.

Named for the physicist, an Einstein ring appears when, due to a process called gravitational lensing, light from a galaxy is diverted by a massive object en route to Earth. If the observer, lens, and source are all perfectly aligned, the light is stretched, and appears as a ring. This occurs because gravity bends the path of light; very dense, high-mass objects like black holes often create such distortions.

In this case, the "Molten Ring'' is a nickname for a galaxy officially named GAL-CLUS-022058s, which is located in the southern constellation Fornax.

Saurabh Jha, a professor of physics and astronomy at Rutgers University who is credited for the image, explained to Salon that the much-talked-about image is an incredible example of gravitational lensing.

"Most of the objects you see in the image are galaxies, collections of hundreds of billions of stars each," Jha said in email. "The yellowish-orange galaxies near the middle of the image are part of a galaxy cluster; Galaxy clusters are among the most massive, gravitationally-bound objects in the Universe."

This is because most of the mass in a galaxy cluster comes from dark matter, Jha explained.

Jha added that in the image there is one galaxy that looks "stretched and distorted, almost wrapping around the central galaxy of the cluster." This is a "gravitational mirage," he said, because in reality the galaxy is behind the central cluster galaxy—as in "billions of light-years further away."

On the left side and below, you see more images of that same galaxy, "stretched out, with an almost 'liquified' appearance," he said.

"In this case the ring does not extend all the way around, but almost," he explained.

Jha added that the image we see is the result of a collaborative effort between multiple observations made with the Hubble Space Telescope, processing by Leo Shatz, and a previous version was made by Judy Schmidt.

Astronomers first discovered the Molten Ring through observations at one of the Magellan telescopes at Las Campanas Observatory in Chile. But this was a ground-based telescope, limiting the clarity of the image and depth of observations, which is when the Hubble stepped in. Since the Hubble Space Telescope is a space telescope, it's able to take better images of our universe without interference from light pollution and clouds.

"We knew this was going to be an interesting looking system, but we were blown away by the amazing Hubble data," Jha said.

Jha noted that the galaxy is a spiral galaxy like our own Milky Way galaxy, though billions of light-years away.

"That means we are seeing the image of that galaxy as it was billions of years ago, and so we can study it to see what spiral galaxies were like so long ago," Jha said. "What's especially nice about this system is that nature has given us a cosmic 'magnifying glass' — the gravitational lens ' that lets us study this particular galaxy in much finer detail than we could do otherwise."