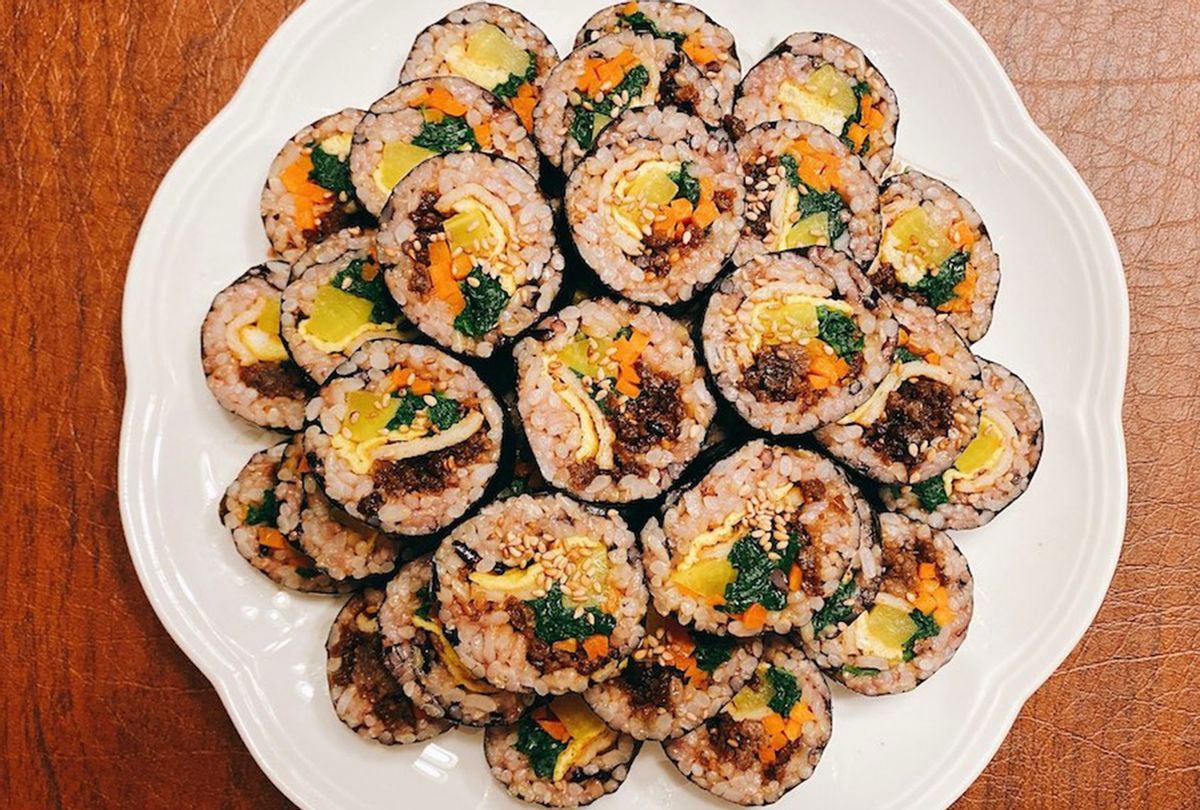 Kimbap translates to seaweed ("kim") rice ("bap"), and it is decidedly not "Korean sushi," as some may describe it. Yes, it's technically rice wrapped in seaweed with fillings, but the comparison stops there. Kimbap's ingredients are distinct and particular to the dish: marinated vegetables, fried egg, ground meat and fish cake, to name a few. My friend's mom says the ingredients should represent the color spectrum – a feast for both the eyes and the taste buds.

Growing up in a Korean household, there were good meals and really good meals. And then there were the meals that sparked a specific kind of joy because it felt special even though it was just another Tuesday evening.

Whenever I saw my grandma prepping ingredients for kimbap, dinner immediately became something to look forward to. Various marinated vegetables and fillings were arranged on large plates, ready to be rolled up tightly with seasoned rice and seaweed into colorful – and delicious – vehicles of flavor. Now that I understand the work involved in making kimbap, I appreciate my grandma's labor of love even more. It also helps that she has that magic touch.

Unlike many Korean dishes for which all the ingredients go into a stew pot or fry pan, and the taste is adjusted along the way, homemade kimbap requires some more planning – it's not something you can casually decide to make for dinner after digging through the fridge. If you have the time and means to put in the work, though, you'll reap the fruits of your labor (and have some fun along the way).

There are many potential fillings for kimbap, but the traditional ones are carrots, spinach, danmuji (yellow pickled radish), fried egg, odeng (fish cake) and marinated beef. All the fillings must be prepped separately, whether cooking and seasoning the vegetables or cutting the fried eggs into long strips. The rice is also seasoned with a bit of salt, sugar, vinegar and/or sesame oil. Because each component is seasoned in some capacity and each ingredient is so different flavor and texture-wise, the end result is a rich multi-dimensional experience.

After the fillings are prepped, they're rolled up in rice and seaweed on a bamboo mat. The whole process is an art – rolling the kimbap evenly and tightly, avoiding bulging or tearing, and using the right ratio of rice to fillings. Finished kimbap are cut into 1/2-inch-thick slices, revealing a festive and colorful cross-section. In my house, my grandma was the only one who made kimbap – not only did she season everything just so, but she also rolled them beautifully and consistently.

Though delicious in any setting, kimbap is a typical picnic food. It's easy to transport and just as fun to eat. During biannual Korean church picnics growing up, I remember kimbap being a common shared food as families ate and socialized together. It's also considered boon-shik, a category of Korean food consumed as casual, cheap and crave-worthy street snacks.

Like many foods, the exact origins of kimbap are not super clear. One theory posits that kimbap was born out of the Japanese occupation of Korea during the first half of the 20th Century when Koreans adapted the Japanese roll and made it their own. For example, Koreans opted for sesame oil to season the rice for kimbap while the Japanese used rice vinegar. Or perhaps kimbap was a natural evolution of eating rice wrapped in seaweed with side dishes, a practice stemming from the Joseon era (1392-1910). Whatever the real origins are, kimbap has become a beloved snack, picnic and on-the-go food in Korean culture.

Nowadays, people have gotten creative with kimbap fillings: cheese, tuna, fried pork cutlet (donkatsu), fish eggs and kimchi are just a few potential options. Triangle (sam-gak) kimbap is a popular on-the-go option, similar to Japanese onigiri with a singular filling inside. Because kimbap is so time-consuming to make, most people opt to buy it from stores or restaurants whenever the occasion arises. No matter where you get it though, the satisfaction factor is still there.

My dad and I are firm believers that the best part of kimbap is the end pieces because of the large filling-to-rice ratio (very important!). And the best way to eat kimbap has become somewhat of a tradition in our family – coating day-old pieces of kimbap in egg and frying in a pan. The sizzle is enough to make your mouth water, and the hot layer of fried egg revives the dried rice and somehow melds and amplifies the flavors of the fillings. It's like a kimbap encore; I love fresh kimbap, but I think pan-fried kimbap takes it to the next level.

Whether lovingly made by my grandma or by an ajumma (aunt-like figure) I don't know in Manhattan's Koreatown, kimbap will always be a welcome treat – one that evokes nostalgia and never fails to be immensely satisfying. The vibrant colors, unique flavors and varying textures provide a one-of-a-kind culinary experience in each bite. Try grabbing a roll of kimbap for your next picnic – you'll never look back!

By Joy Cho, Institute of Culinary Education alum and writer