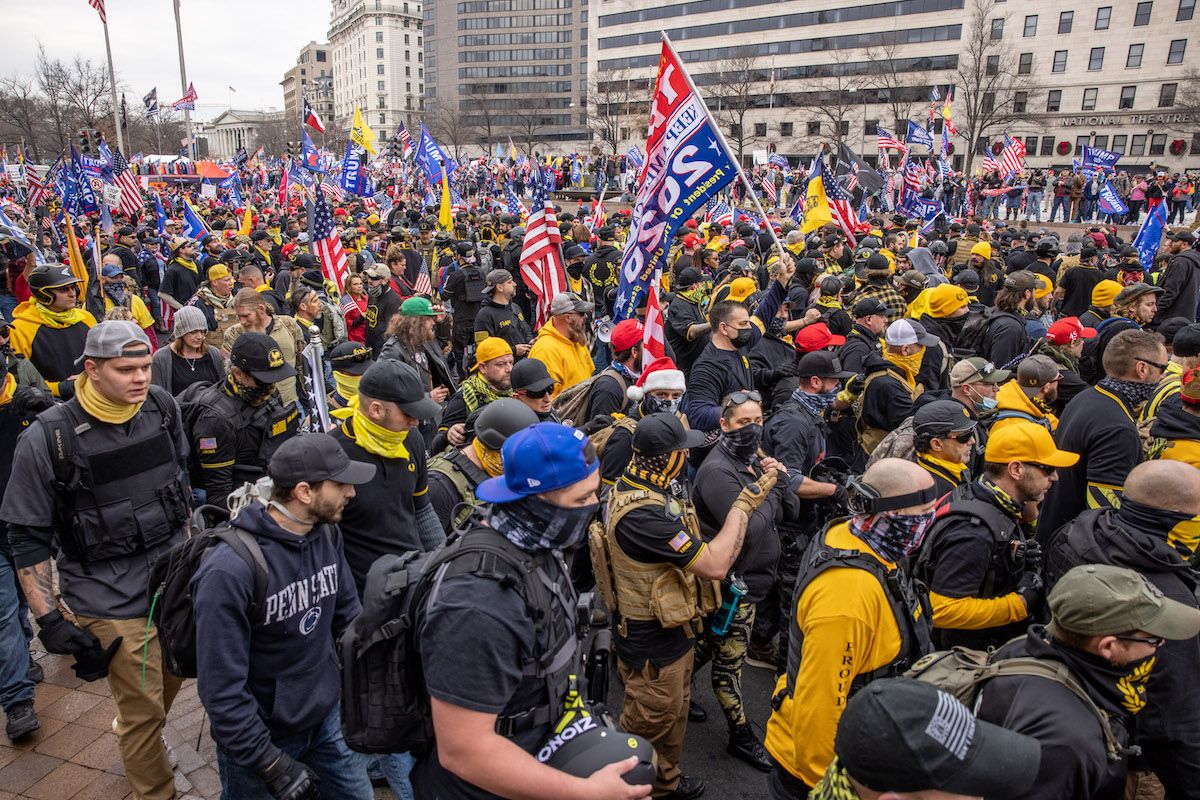 Proud Boys during a rally for Donald Trump in Washington, DC, December 12, 2020. (Evelyn Hockstein/For The Washington Post via Getty Images)
--

An historic Black church in Washington, D.C. on Monday sued the Proud Boys, the right-wing hate group whose leader acknowledged burning a Black Lives Matter sign at the house of worship during a violent December 2020 rally in support of President Donald Trump.

The lawsuit (pdf), filed by the Lawyers' Committee for Civil Rights Under Law; Washington Lawyers' Committee for Civil Rights and Urban Affairs; and the law firm of Paul, Weiss, Rifkind, Wharton & Garrison LLP on behalf of the Metropolitan African Methodist Episcopal Church against Proud Boys Interntational, LLC, accuses members of the group of "engaging in acts of terror and vandalizing church property in an effort to intimidate the church and silence its support for racial justice."

On December 12, 2020, hundreds of Proud Boys from across the country descended on the nation's capital, where they confronted and attacked counterprotesters in the streets. At least four people were stabbed during the clashes, which some critics linked to Trump's September presidential debate directive to the Proud Boys to "stand back and stand by."

According to the lawsuit, members of the Proud Boys had prepared for violence ahead of the December gathering, exhorting each other to "buy ammo [and] clean your guns." One Proud Boy wrote that "tonight we keep our enemies awake, tonight we become nightmares."

Designated a hate group by the Southern Poverty Law Center, the all-male Proud Boys are known for their white nationalist, Islamophobic, and misogynistic rhetoric, as well as their presence at the deadly 2017 "Unite the Right" rally in Charlottesville, Virginia.

"Let me make this simple," Tarrio told the Washington Post last month. "I did it."

"I have nothing to hide," he said, explaining that he believes Black Lives Matter—the nonviolent movement for racial justice—"has terrorized the citizens of this country."

"In the burning of the BLM sign, I was the one that lit it on fire," Tarrio said on a far-right podcast last month, according to The Independent. "I was the person that went ahead and put the lighter to it and engulfed it in flames, and I am damn proud that I did."

Washington, D.C. police and the FBI are investigating the buring of Black Lives Matter banners at Metropolitan AME and Asbury United Methodist Church—also on December 12—as possible hate crimes, although Tarrio claims he was unaware the churches are predominantly Black.

Karl Racine, the D.C. attorney general, said in a letter to U.S. Attorney for the Disrict of Columbia Michael Sherwin that the Proud Boys' actions on December 12 were meant to "terrorize Black people," and that they "violated D.C. law and were hate crimes."

"They harmed people of color, and every person who lives and works in our city who believes in fairness, justice, and racial equity," asserted Racine.

Kristen Clarke, president and executive director of the Lawyers' Committee for Civil Rights Under Law, said in a statement that "white supremacists like the Proud Boys would rather see the country burn than to see it united together under justice and freedom for all."

"Black churches and other religious institutions have a long and ugly history of being targeted by white supremacists in racist and violent attacks meant to intimidate and create fear," added Clarke. "Our lawsuit aims to hold those who engage in such action accountable. We are proud to represent Metropolitan AME, which has a long history of standing against bigotry and hate and whose courage and determination to fight back is a beacon of hope for the community."

"But I am more disturbed by the continued mythology of imperial America," he wrote. "This mythology supports those who commit violence against human beings for political ends, deny citizens their right to vote, denigrate sacred spaces, and claim as their own whatever they survey."

The lawsuit states that Metropolitan AME is seeking "compensatory, consequential, and punitive damages," as well as "injunctive relief."

The suit states that the Proud Boys are planning to return to Washington, D.C. for rallies on January 6 and January 20 "to continue their conspiracy to engage in violent and destructive acts against their 'enemies,' including racial justice activists and supporters of the Black Lives Matter movement."

The lawsuit further states that Tarrio said Proud Boys members would dress "incognito" instead of in the black and yellow attire mandated by the group's bylaws,  that they would "spread across downtown D.C. in smaller teams" to "conceal intentions" and "pose as a friend" in order to "stir up waters to catch fish" and "keep others in suspended terror."