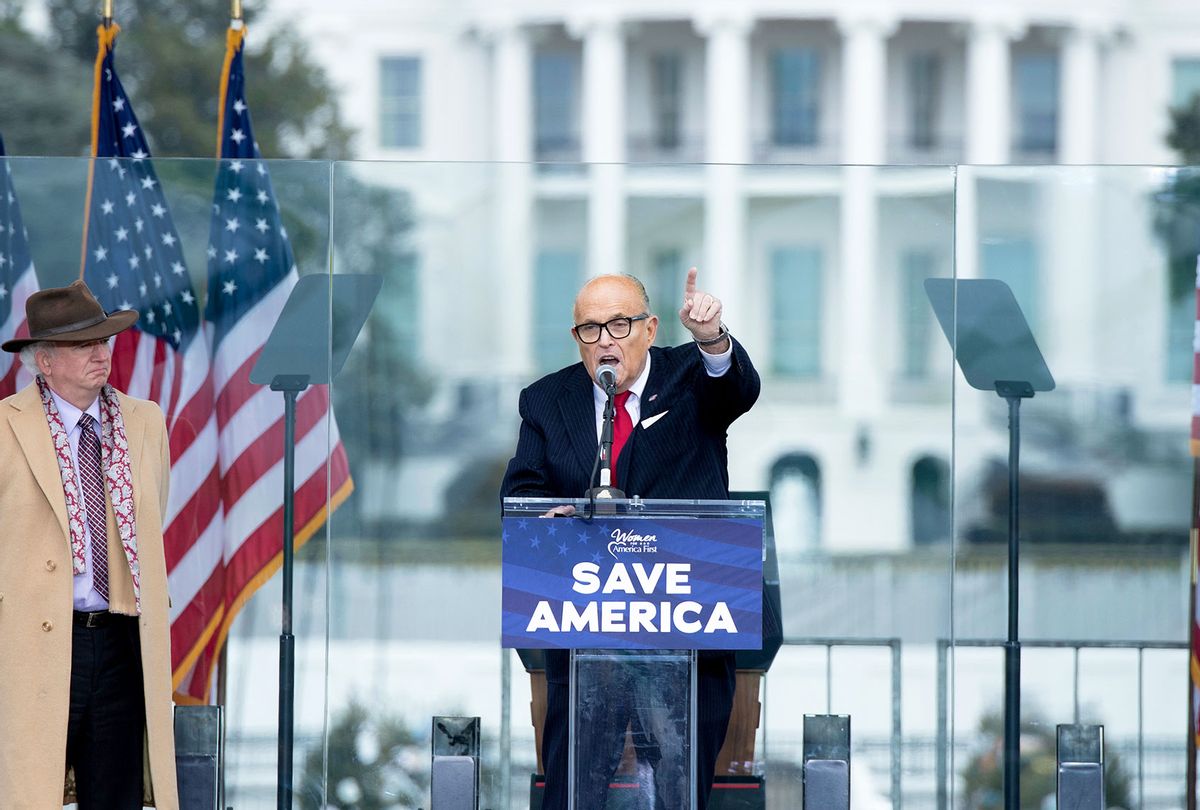 US President Donald Trump's personal lawyer Rudy Giuliani speaks to supporters from The Ellipse near the White House on January 6, 2021, in Washington, DC. (BRENDAN SMIALOWSKI/AFP via Getty Images)
--

Just before a mob of MAGA supporters swamped the U.S. Capitol on Wednesday, Donald Trump's attorney Rudy Giuliani proposed a "trial by combat" over his baseless allegations of election rigging during a bizarre speech at a rally to protest the certification of Joe Biden's Electoral College win.

Giuliani spoke ahead of Trump's speech at the so-called "Save America Rally" in Washington DC, repeating the same false claims that have been rejected by dozens of courts and Trump-appointed judges, Republican election officials, and Trump's own Justice Department. The rally came ahead of a joint session of Congress to formally certify the Electoral College results where a group of Republicans planned a futile challenge to an election President-elect Joe Biden won by a 306-232 electoral margin.

At one point during his speech, the former New York City mayor said he would stake his reputation on a bizarre conspiracy theory that Dominion Voting machines, which are used in numerous states, flipped votes from Trump to Biden even though the claim has been repeatedly discredited.

"So over the next ten days, we get to see the machines that are crooked, the ballots that are fraudulent. And if we are wrong we will be made fools of. But if we are right, a lot of them will go to jail," Giuliani declared. "So let's have trial by combat! I'm willing to stake my reputation, the president is willing to stake his reputation on the fact that we're going to find criminality there."

"What reputation?" dozens of Twitter users replied all at once.

Trump and his allies have tried and failed to show any evidence of widespread fraud or voting irregularities in dozens of lawsuits. Instead, Giuliani and the Trump campaign now face their own legal threat. Dominion Voting Systems has instructed Giuliani to preserve all records related to his claims against the company ahead of an "imminent" lawsuit in response to his "defamatory claims." A Dominion employee who said he was forced into hiding after Giuliani spread conspiracy theories about his role in the would-be scheme separately sued the Trump attorney and the Trump campaign, along with multiple Republican allies and conservative news outlets, for intentional infliction of emotional distress and civil conspiracy.

Giuliani has also pushed a separate conspiracy theory alleging that Dominion is actually a "front" for another voting tech company called Smartmatic even though the two companies are not related in any way. The false claim prompted conservative media outlets like Fox News to air segments debunking the claim.

"This is extremely dangerous rhetoric," The Washington Post's Aaron Blake said in response to Giuliani's comments, adding that "a trial by combat is when you literally physically fight someone to decide a legal issue, irrespective of actual evidence."