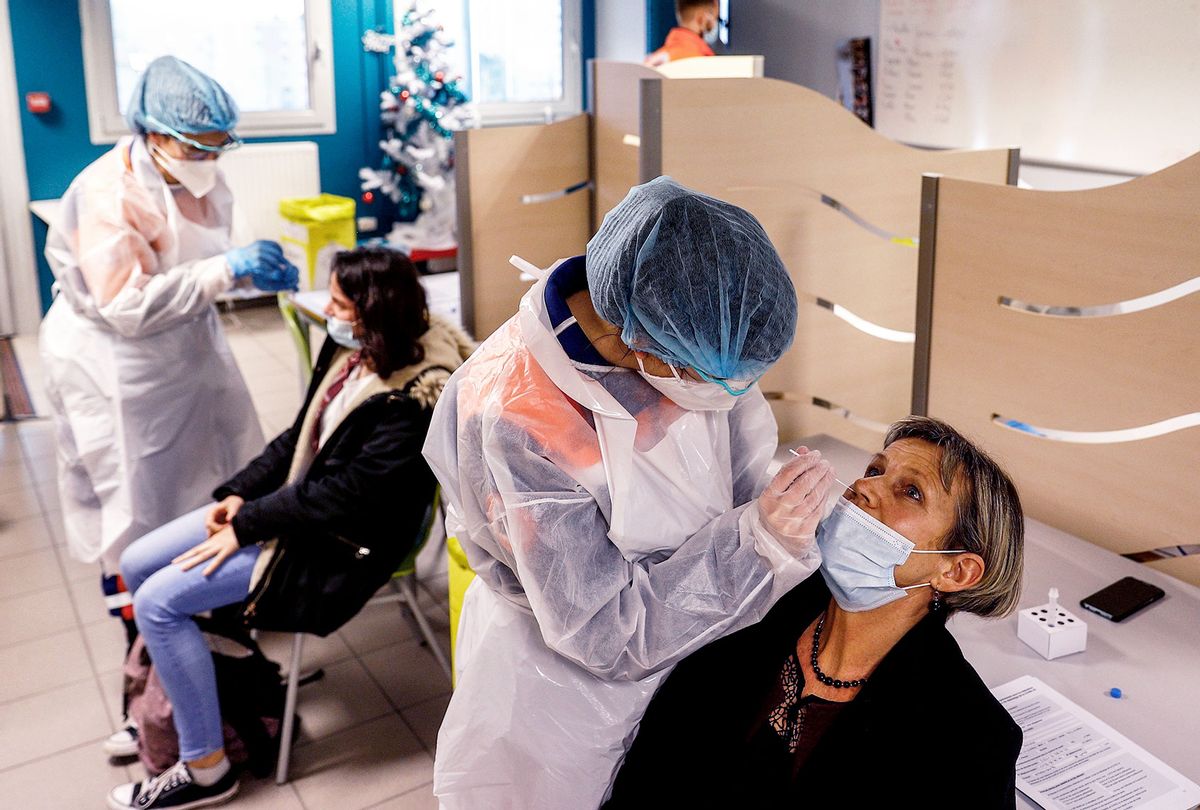 A member of the Civil Protection takes a nasal sample with a swab from a teacher at an operation center for a Covid-19 mass testing campaign at a High School in Montivillliers, northern France on December 15, 2020. (SAMEER AL-DOUMY/AFP via Getty Image)
--

For several months, scientists have been aware of multiple strains of the novel coronavirus circulating in the United States. Yet one specific mutation, called B117, is alarming epidemiologists because of how much more transmissible rate.

According to two separate studies published by researchers in the United Kingdom, the variant originated in the UK between late summer and early autumn 2020. In early December, it started to alarm researchers as it appeared more frequently in SARS-CoV-2 samples in southern England—a sign that it could be a new dominant strain, and perhaps more contagious than previous ones. Indeed, according to preliminary research on the strain, that is the case. Researchers estimate that the variant has an increased transmission rate of 50 to 70 percent compared to other variants in the UK.

What that means is that this strain is infecting more people.

"There are mathematical models that have been put forth that suggest that this can be transmitted more rapidly than the kind of current strain that we have," explained Dr. George Rutherford, a professor of epidemiology at the University of California, San Francisco. Rutherford added that the concern around B117 is that it appears to have a "competitive advantage" to the strains that have already been circulating.

Specifically, the mathematical model Rutherford is referring to is the basic reproductive number, known as "R".

When it comes to "viral clones," epidemiologists want the R number to be below 1, meaning fewer than one person is transmitted the virus for each one who contracts it. If R is below 1, that is "what leads to extinction," Rutherford said.

Researchers estimate that B117's transmission rate is between 1.5 and 1.7. Part of the so-called success of this variant could be the mutations that have happened within the variant; they appear to affect the spike protein that attaches to human cells, essentially improving its ability to bind to receptors on the cells.

"What's interesting about this new variant is that it has 17 mutations, and of those 17, eight of them are in the spike protein area," said Dean Blumberg, chief of pediatric infectious diseases and associate professor in the Department of Pediatrics at the University of California, Davis. "That's important, because the spike protein serves as the initial attachment factor for the virus to receptors in our cells." Blumberg noted that "we need to be immune to that spike protein to prevent infection." Preliminary research also suggests that patients with this variant have higher levels of viral load compared to people who don't have the variant.

Currently, there is no evidence that this variant causes more severe illness or increased risk of death. Notably, the vaccines and monoclonal antibodies, which are the lab-made proteins that incite an immune response, have not been tailored to fight the B117 strain. According to the Centers for Disease and Control, the virus would "likely need to accumulate multiple mutations in the spike protein to evade immunity induced by vaccines or by natural infection."

Since the United Kingdom's research, various cases of people being infected with the variant have been found in the United States. Many of these patients had no travel history, suggesting that it is already widespread. Recently, a man in upstate New York, twenty-four people in San Diego, and more people in Colorado, Florida, and Georgia have been found to have the super-infectious B117 strain.

With a higher transmission rate and perhaps higher viral loads, current mitigation strategies — like wearing a mask and social distancing — remain effective. But they're not completely bulletproof.

"They absolutely still work," Rutherford said. "What we know is that masks not only prevent infection, but if they don't fail to prevent infection they're associated with less severe disease, they presumably cut down on the inoculum size."

Blumberg said there may be a higher likelihood of transmission with the new variant even when proper preventative measures are taken.