One West Virginia Republican live-streamed with the mobs in DC, another was caught opening doors to them in Oregon 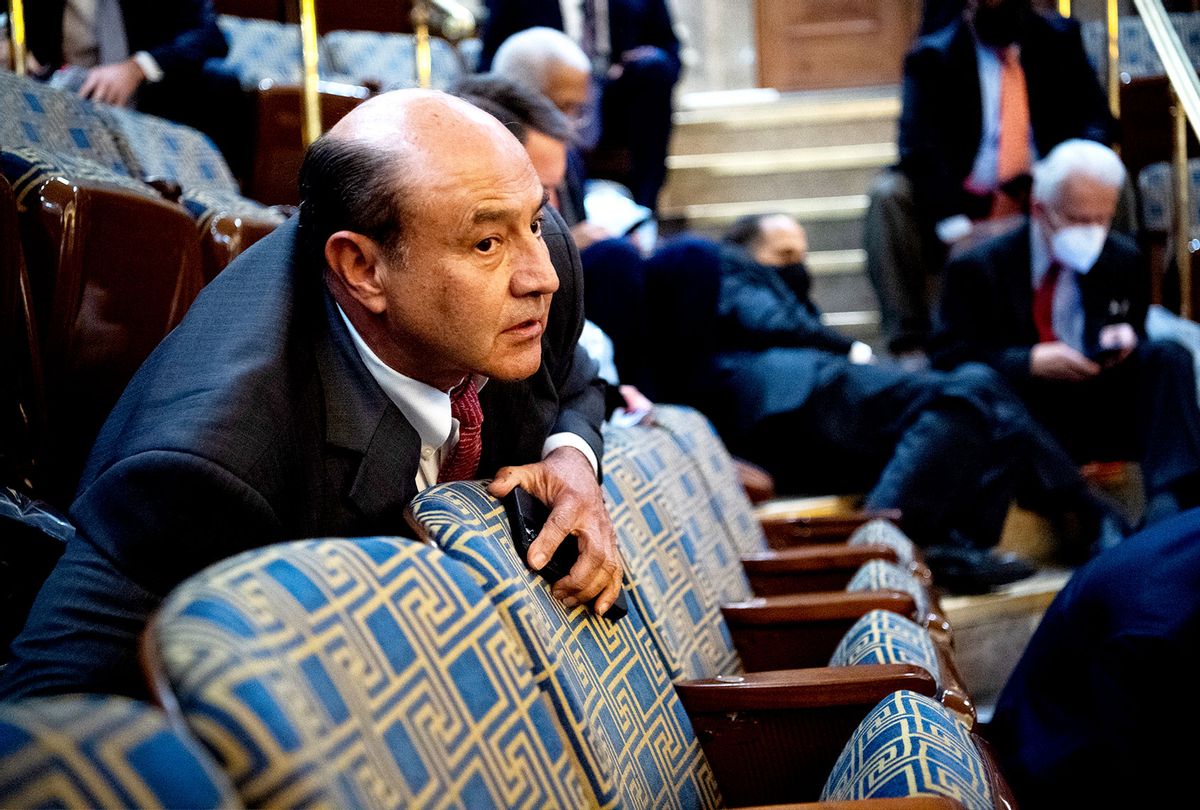 "We're in! Let's go, keep it moving, baby!" shouted Derrick Evans, a newly elected Republican member of West Virginia's House of Delegates, as he is seen pushing his way through the rotunda at the U.S. Capitol with a throng of violent Trump supporters in a video live-streamed on Facebook.

The video, deleted by Evans after circulating Twitter, shows him donning a helmet and military gear, shouting, "Derrick Evans is in the Capitol [...] Patriots inside, baby!"

Evans, 34, won his first term as a state lawmaker in November and was charged by the Department of Justice on Friday for illegally entering the Capitol. He is one of several elected Republican lawmakers across the country who have been identified as either participating in or aiding violent pro-Trump attacks on legislative bodies this week.

Virginia state Sen. Amanda Chase, who describes herself as "Trump in heels," spoke at the rally that preceded the riot on Wednesday. She later praised the rioters and blamed the violence on "antifa or BLM agents of destruction," for which her Facebook account was suspended on Friday. After Arizona state Rep. Mark Finchem posted photos of himself at Trump's rally, he continued to push a baseless conspiracy theory — that anti-fascist activists, not Trump supporters, broke into the Capitol — which had already been debunked by the Department of Justice.

Missouri state lawmaker Rep. Justin Hill skipped his own swearing-in ceremony to travel to Trump's coup, where he admits he sat back and watched as an angry mob descended on the U.S. Capitol. Pennsylvania state Sen. Doug Mastriano, a retired military colonel who said he helped organize a bus ride to the demonstrations, posed for photos with former Republican state representative Rick Saccone, who served for 18 years in the U.S. Air Force.

"We're storming the Capitol!" Saccone said in a video he posted to Facebook. "They broke down the gates!" he continued. "They're macing them up there. We're trying to run out all of the evil people and all the RINOs that have betrayed our president. We're going to run them out of their offices!"

Oregon Republican Rep. Mike Nearman was caught on video opening a door to protestors who rushed into the state Capitol in Salem on Dec. 21. Some rioters then sprayed six law enforcement officers with a chemical substance and others violently attacked journalists.

In light of his actions, West Virginia officials are now calling for Evans' hasty prosecution and resignation.

The West Virginia Democratic Party declared in a statement, "[Evans] must be held accountable for participating in an act of insurrection against the United States government and risking the lives of lawmakers and Capitol police." The Party added, "The West Virginia Democratic Party calls for his immediate resignation from the House of Delegates and that he be prosecuted to the fullest extent of the law." A Change.org petition, with over 50,000 signatories, has also called for Evans' immediate removal from office.

Roger Hanshaw, the speaker of the West Virginia's House of Delegates, said Evans will have to "answer to his constituents and colleagues regarding his involvement in what has occurred today."

Evans responded to sharp rebukes online by claiming that he did not participate in any violence or destruction of property, and defended his involvement in the riot as "an independent member of the media." He added, "I want to assure you all that I did not have any negative interactions with law enforcement."

Evans' attorney John H. Bryan told NBC that his client "did nothing wrong." Bryan explained, "He was exercising his First Amendment rights to peacefully protest and film a historic and dynamic event [...] He engaged in no violence, no rioting, no destruction of property, and no illegal behavior."