Though I'll be getting the vaccine, I don't judge my friends for being mistrustful of the biotech industry 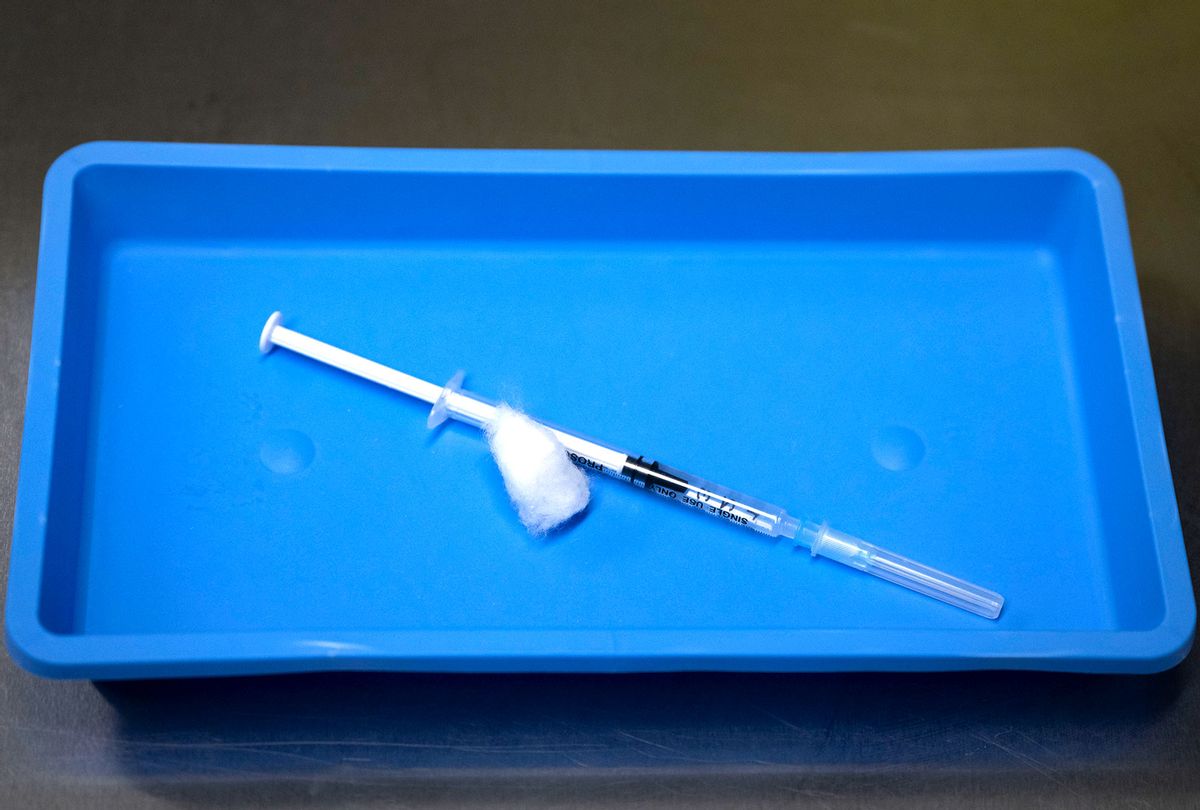 A Oxford-AstraZeneca vaccine prepared for a patient at Pontcae Medical Practice on January 4, 2021 in Merthyr Tydfil, Wales. The Oxford-AstraZeneca COVID-19 vaccine was administered at a handful of hospitals today before being rolled out to hundreds of GP-led sites across the country this week. (Matthew Horwood/Getty Images)
--

I can't even begin to list the topics that I come across in a day — everything from the newest Nikes, to who is the best NBA player of all time, to why Black men over 30 shouldn't wear open-toe sandals, to recipes for dishes I'd never cook or eat. Yet lately, everybody has been talking about the same thing: the coronavirus vaccine. What's up with it, what's good or bad about it, why we should or should not take it.

The first round of the Pfizer vaccine dropped a few weeks ago and is currently being distributed to health care workers and first responders. But most of the people in my chats are 8th responders like me, so we won't get the vaccine until the spring, maybe if we are lucky. But still, everybody is on edge.

One friend said, "It's going to kill all Black people." Another said, "While killing Black people, it will also make white people taller and give them fresher breath." I said, "I hope it makes us glow in the dark and have night vision because I hate driving after the sun goes down!" and another said, "they want to make us sterile, they don't want the Black man to have any more children."

Some of my friends are ready to take the shots. But collectively, most of those in my groupt chats are sold on not taking the vaccine. That's because as Black people, we just don't trust medical institutions.

The concern stretches far beyond my own personal sphere: a recent Kasier study found that that nearly a third of Black Americans are skeptical about the coronavirus vaccine. The distrust stems from the fact that Black people have been used as medical guinea pigs throughout history. That includes such infamous incidents as the so-called "Tuskegee Study of Untreated Syphilis in the Negro Male," in which white scientists lied to Black men saying that they were treating them for "bad blood" when they were actually watching them suffer and die; or Dr. James Marion Sims' brutal treatment of enslaved babies during neonatal tetanus experiments, where he beat holes into their heads with a shoemaker's awl. Sometimes, the medical establishment doesn't experiment on us but rips us off, like with Henrietta Lacks, a Black woman whose mutated cancer cells were cultivated and experimented on to this day, without her consent.

Tye is a former Johns Hopkins employee from my neighborhood who works in patient escort, and who is in one or two of my group chats. He once told me that a kooky, pale-faced, Doc Brown–looking-physican tipped him $100 bucks to take a dead body down to a lower level of the hospital using a special elevator that required a special key.

Tye was used to transporting patients that were alive, but an extra $100 looked real good, especially since he only made $10 an hour. Tye rolled the expired patient down the long sterile hallway, unlocked and entered the elevator, and then took it down to the place where the doctor instructed. He exited the elevator, patient first and heard a strange "ki-ki-ki-ki-ki!" sound ranging from around the corner. Tye parked the body, hunched his wide shoulders, and slowly tiptoed to the end of the hall, toward the sound, "ki-ki-ki-ki-ki!" He reached the corner, peeked around, and a huge research monkey jumped out and punched him in the face. Tye tried to punch back, but it was too much — the monkey was apparently trained and ready to go. He fled, making it back to the elevator, never turning around to see if the monkey was trailing. When Tye got back up stairs, the doctor was gone, and he was sent home with a busted face, and eventually fired for a reason he never shared with us.

Now, I'm not saying his story is 100% true, but I must tell you two things­ about Tye. The first is that he can really fight — he could've been a pro boxer. I have been watching him manhandle kids double his size and age since we were children. The second is that the marks on his head didn't look like they came from anything but a punch from a large gorilla. Was he lying? I don't know, because Hopkins does have a zoology department, and history has taught us to not trust hospitals — so we expect crazy things like being attacked by golden-gloved monkeys to happen.

For that reason alone, I'd never down a person who was scared to take a vaccine or applaud a bully who calls people stupid for not taking it. What I will do is consider the feelings of the people who are excited about the vaccine as much as I consider the feelings of the people who aren't, because all we have is our own stories. Some of the people in my chats have lost more than one loved one to COVID-19, and want the vaccine to be safe, because they know they had to sit around in pain while a family member died alone due to visiting restrictions. Others in my chats lost relatives due to careless mistakes made by people who work in healthcare — they are forever sacred and refuse to trust anything that Western medicine has to offer. Both groups are right.

2020 has been a tough year.  Please, let's not start 2021 by belittling those who are doing what you don't think they should do. Like millions of other American's who want to see this end, I've been social distancing, wearing my mask at all times. And, I should note, I'm getting the vaccine, as that is the only way to take step towards herd immunity.

According to the Johns Hopkins Bloomberg School of Public Health:

Herd Immunity is  most of a population is immune to an infectious disease, this provides indirect protection—or herd immunity (also called herd protection)—to those who are not immune to the disease.

For example, if 80% of a population is immune to a virus, four out of every five people who encounter someone with the disease won't get sick (and won't spread the disease any further). In this way, the spread of infectious diseases is kept under control. Depending how contagious an infection is, usually 50% to 90% of a population needs immunity to achieve herd immunity.

Yes taking a new vaccine is scary, but I want this disease under control. Again, that's my choice — that is what I'm willing to do for my family, myself, my friends and you.