Archeologists just uncovered food stalls in Pompeii. I recreated a stew inspired by their findings

With help from scholars, museum archives and an account cookbook, I pieced together an ancient-inspired lamb stew 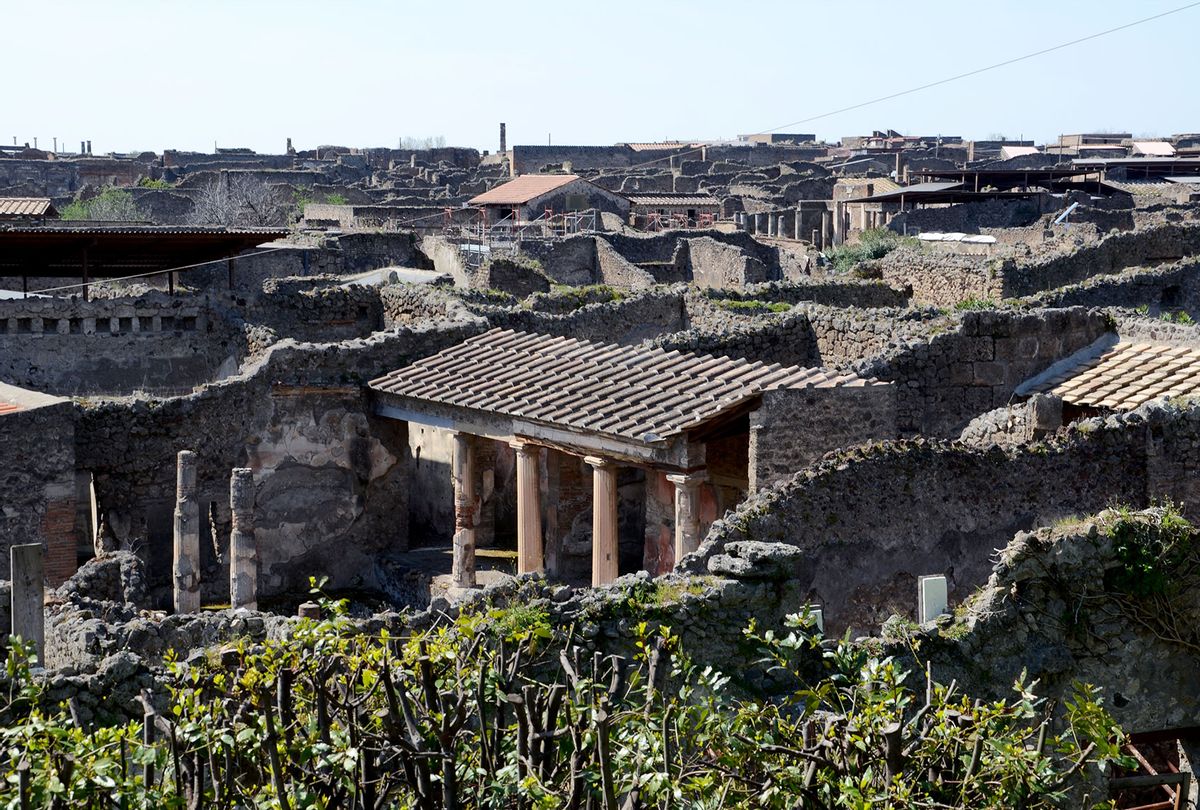 Looking at Pompeii from above (Getty Images)
--

On Dec. 26, archeologists finished excavating a complete thermopolium — a Roman food counter — in the ancient city of Pompeii, which was buried in ash and stone when Mount Vesuvius erupted in A.D. 79.

"As well as being another insight into daily life at Pompeii, the possibilities for study of this Thermopolium are exceptional, because for the first time an area of this type has been excavated in its entirety, and it has been possible to carry out all the analyses that today's technology permits," said Massimo Osanna, the interim director general of the Archaeological Park of Pompeii, in a statement.

As a classical studies nerd and lover of food history, I was absolutely consumed by this discovery. According to Osanna, a team of experts — including anthropologists, geologists and zoologists — have already started to assess the food stall to gain a better "understanding of what was sold and what the diet was like."

In many ways, the site looked like a modern food court; images of roosters and ducks were painted on the exterior of a stall, serving as a kind of menu board or advertisement. In the wreckage, there were also several dolia, large earthenware jars, that upon being opened, still smelled strongly of wine.

But what exactly were they eating? The specific details are admittedly still a little murky. But as Chiara Corbina, the archaeozoologist involved in the dig, told the New York Times, there was evidence of a dish involving snails, fish and sheep. Further analysis is expected to determine whether vegetables were part of the ancient recipe, but for now she thinks the "thermopolium probably served a stew or soup that included all these animals together."

At that moment, I knew I had to make that stew. Or at least a version of it with modern ingredients and cooking techniques. Here was my new pandemic project — a welcome distraction from the ever-burning dumpster fire that is our current reality. Forget baking sourdough, let's taste history.

I immediately emailed Dr. Duncan MacRae, an associate professor of Classics at University of California, Berkeley, who specializes in Roman cultural and social history. He was game to help field my questions, though offered the disclaimer that "it is difficult to overstate how ignorant all we historians and archaeologists are about Roman life. It was a long time ago and the evidence is always patchy and hard to interpret."

That said — as the sage Carl Weathers would suggest on "Arrested Development" — let's get ourselves a stew going.

What sources did I reference?

In addition to MacRae's insight about the dietary habits of the Ancient Romans, as well as the news release from the dig site, I referenced "Apicius," a collection of Roman cookery recipes. These were likely compiled sometime between the first and fourth centuries, and while the collection is named for Marcus Gavius Apicius, a Roman gourmet who flourished during Tiberius' reign in the first century, there's probably not a single author.

There are a number of lamb and kid stews in the text (you can check them out here) which served as a backbone for my experiment.

I also took a deep dive into materials belonging to several museums and archives that have hosted exhibitions about Ancient Rome.

What meats did I use?

Perhaps unsurprisingly, aged mutton wasn't readily available at my supermarket meat counter and the specialty butcher I typically go to with these kinds of requests had limited inventory due to the pandemic, so I went with ground lamb as the next best thing. As mentioned before, there is a precedent for using lamb in Roman cuisine.

Snails — well, tinned escargot — I actually had on hand thanks to a friend. While I'd intended to just drown them, along with my sorrows, in butter and garlic, I sacrificed those plans for this more noble cause.

Finally, the findings at Pompeii mention that fish may have been part of this soupy dish, but we'll address that in the condiments section.

What about vegetables and grains?

"The ancients farmed all sorts of grains, herbs and vegetables," MacRae said. "Though not maize and potato — those are New World plants!" In "Apicius," several vegetables are mentioned often: fennel, onions and leeks. Lovage, a leafy herb, is also mentioned, but I substituted in celery leaves because they have a similar flavor and are easier to find at the supermarket.

"Naturalis Historia," an encyclopedia written circa A.D .77 by Pliny the Elder, mentions wild carrots  — a distinct point of pride, FYI, for the World Carrot Museum.

According to MacRae, "bread was very important to the Romans, and was probably the main source of calories, at least in a town like Pompeii." Great! Love some bread with a bowl of stew.

Lentils are surprisingly popular in "Apicius," and legend has it that Emperor Heliogabalus, who was assassinated in A.D. 222 and known for his decadence, revered lentils so much he would mix them with onyx and pearls.

What spices and condiments made it into the mix?

The Ancient Romans did have access to Indian Ocean trade routes, which enabled them to source spices. Per MacRae, they seemed to have been especially keen on black pepper. There is also evidence of large-scale imports of cinnamon.

"A study done in the late 1960s found over 140 different spices mentioned in ancient texts, so there was some access sometimes and for some people to quite a wide range of spice," he said. "But again, the simple fact of the immense costs of importing goods without fossil fuel for vehicles to Italy from the Indian Ocean in antiquity means that there must have been limitations in how common they were."

As a result, there is quite a bit of evidence that the Romans relied on sauces — including a famous fermented fish sauce called garum — and honey to hide or enhance flavor, rather than spices. Wine was a big flavoring and cooking agent, too.

Honey, white whine, black pepper and some anchovies dissolved in oil — a reference to both garum and the fish found in the Pompeii pots — went on my list. While spices would have likely been prohibitively expensive, to the point that street vendors wouldn't use them regularly, I decided to bend the rules a touch and add two spices that are mentioned in the lamb stew in "Apicius": cumin and coriander.

How was this dish likely cooked?

While olive oil could have been a possible cooking fat, as it was used in Ancient Roman dishes, MacRae speculates that many dishes were simply boiled and stewed over open flames. I guess my electric stovetop would have to do.

Putting the dish together

It all started with the anchovies. To mimic the savory, fishy flavor that garum would have had (but without aging the fish guts in the sun for several months), I added half a tin of anchovies in olive oil to a large stock pot over medium heat. Once the anchovies were fully dissolved, in went very finely-chopped fennel bulb, carrots, leeks and celery leaves to soften in the flavored oil.

Meanwhile, in a separate bowl I combined the ground lamb with a tablespoon of honey, coriander and black pepper, and half a tablespoon of cumin; you could absolutely use a lamb shoulder roast, dressed with the same spices. I just worked with what was readily available.

Once the vegetables softened, in went the lamb to be sautéed until browned. I followed it with half a cup of dry white wine and three cups of water, bringing the whole mixture to a boil. Then I reduced the heat and allowed it to simmer for about an hour.

The green lentils were the last ingredient to go in the pot, and I cooked them until just softened, about 20 minutes. I served it, obviously, with a hunk of bread. And I have to say — it was absolutely delicious. The complexity of flavor was outstanding, between the licorice-bite of the fennel, the subtle sweetness of the honey and the umami of the anchovy oil (which isn't overwhelmingly fishy).

Is it "authentic"? Eh, probably not. But I found a lot of joy in deeply researching a dish and puzzle-piecing it together. The fact that it came out as well as it did was a big bonus. I took one more liberty and added a quick zest of lemon over the whole thing.

As I found out during my research, lemons were a status symbol in Ancient Rome, and wouldn't become commonplace until the 19th century. During the first century, they would have been coveted, even by the ruling class. Adding them to my stew felt like an unexpected luxury.

Here's how to make it in your own kitchen:

1. In a large stock pot, dissolve half a tin of anchovies in two tablespoons of olive oil over medium heat. Once dissolved, add the fennel, leeks, carrots and celery leaves and sauté until slightly softened.

2. Meanwhile, add the ground lamb, honey, black pepper, coriander and cumin to a large bowl and mix until fully combined.

3. Add an additional tablespoon of olive oil to the stock pot and add the lamb mixture, as well as the snails, stirring until browned.

4. Top the mixture with the wine and three cups of water and bring to boil. Reduce to a gentle simmer, then cover for an hour.

5. Add the lentils to the stew; if the cooking liquid has cooked down too much, add an additional cup of water. Cook until just softened, about 20 minutes. Add salt and pepper to taste.

6. Divide the soup into individual bowls and garnish with fennel fronds and fresh lemon zest. Serve with hearty bread.