In the midst of all this horror, we saw a singular moment in U.S. history that shows how deep we are split 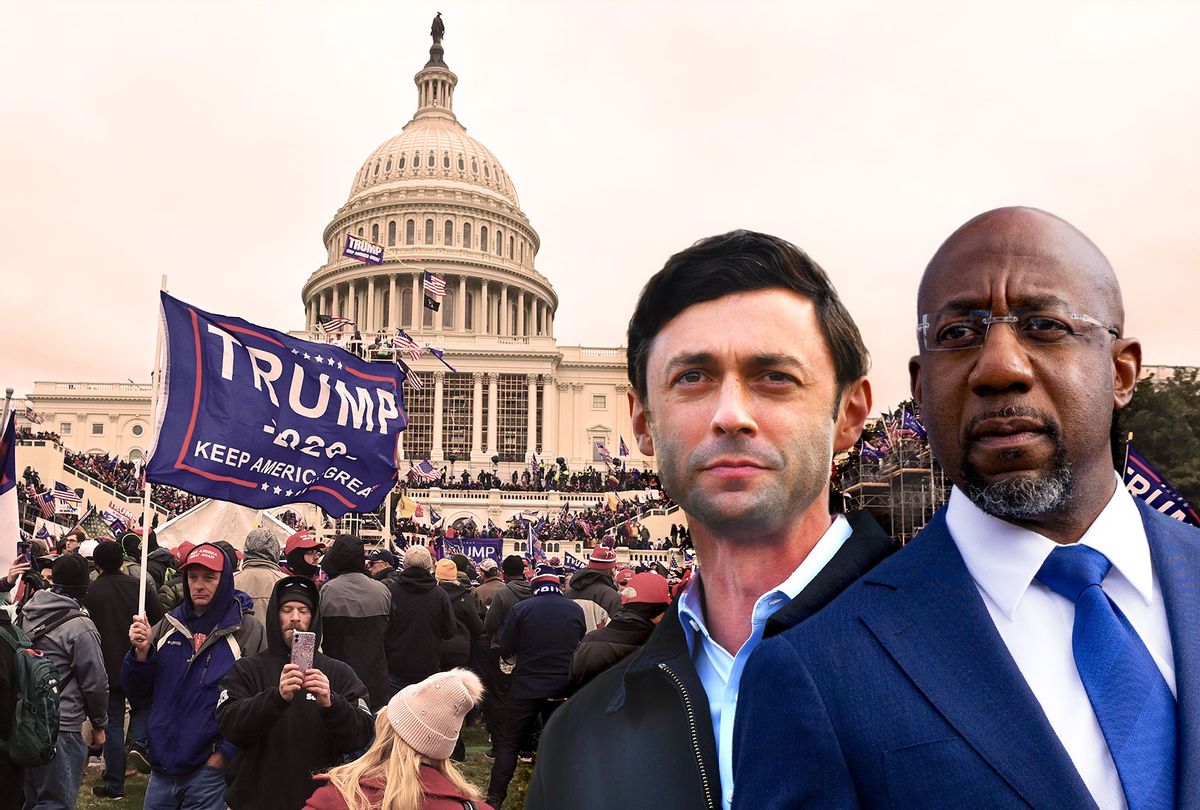 While life in America has gone on over the past five days — football games are still being played, people are having cookouts, kids are going sledding — much of the country is still in a state of shock over what happened on January 6th in Washington D.C. As more and more of the video footage from that day becomes available, it's clear that what happened was far more violent and dangerous than we knew. The pictures we saw on television and social media as it was unfolding looked bad, but what has emerged since then shows that something feral, ugly and deadly was afoot in that crowd that day:

The police officer beaten in that video by a Trump-motivated mob was not Capitol Police Officer Brian Sicknick, who died of wounds from a different incident. It was another officer from the Metropolitan Police Department. That comment by Radley Balko may sound arch, but it isn't. That is exactly what happened and it's clear that there were many in the crowd also prepared to commit violence against elected leaders, presumably in order to force the illegal installation of Donald Trump as president on Jan. 20. That is what they came for. It's what Donald Trump sent them there to do.

Some people on the right have tried to rationalize this by saying that violence that ensued after the George Floyd murder this summer sent the message that the best way to resolve political differences is through violence. This is beyond sophistry. Violent protests have been part of American history since the beginning, starting with the revolution itself. Violent civil unrest has happened in every decade since. The idea that liberals invented it last summer is completely absurd.

But that's not the point. There is a difference between protests, peaceful and otherwise, which people do all over the world, and an attempt to violently overturn an election. To do that by storming a joint session of Congress, with all the representatives present, as it ceremonially certified an election is beyond anything we've ever seen before in this country. In all the protests, riots and uprisings, no one ever took over the U.S. Capitol and marauded through it looking for leaders chanting "we're coming for you" and threatening to hang them. It was no protest, it was an attempted putsch, a violent overthrow of a democratic government on the basis of a Big Lie that the election was fraudulent.

Plenty of people saw it coming. Many of the ringleaders had planned the violence in plain sight and they were incited by the President of the United States and several of his henchmen. People had been pouring into DC for days, ready to rumble. The day before the riot, they held a rally in which The Big Lie was broadcast over and over:

Everyone knew the city was filling up with far right extremists yet for reasons that are still unexplained, the authorities were unprepared at best, complicit at worst. Perhaps they believed that this group of Real Americans from around the nation (and in the Congress) were just blowing smoke when they shared their little #1776 hashtags and plotted their "Stop the Steal" insurrection. But anyone who was paying attention knew that they were focused on the Capitol where the certification ceremony would take place. Why it was left so thinly guarded is still a mystery.

We still haven't had an official briefing from any law enforcement agency on the status of the investigations or analysis of what happened, which is unprecedented. We've had nothing from the Capitol Police, the city police, the FBI, the Department of Justice, no one. The worst violent attack on U.S. government property since the plane hit the Pentagon on 9/11 and there has been no communication from the federal government.

What we are left with are accounts from those who were reporting on the event both inside and outside the Capitol and from those who were inside, terrified that they were about to be taken hostage or worse. Perhaps the most heart-rending is this Buzzfeed account from some Black Capitol policemen who had to deal with the grotesque racism of these insurrectionists, (many of them flying "blue lives matter" flags) including being repeatedly called the n-word:

At the end of the night, after the crowds had been dispersed and Congress got back to the business of certifying president-elect Joe Biden's victory, the veteran officer was overwhelmed with emotion, and broke down in the Rotunda."I sat down with one of my buddies, another Black guy, and tears just started streaming down my face," he said. "I said, 'What the fuck, man? Is this America? What the fuck just happened? I'm so sick and tired of this shit.'"

Soon he was screaming, so that everyone in the Rotunda, including his white colleagues, could hear what he had just gone through."These are racist-ass terrorists," he yelled out.

One of the heroes to have emerged from this riot is this man:

Reading these stories from the Black officers and seeing the footage of that lone cop facing the angry mob and luring them away from the Senators who were still being evacuated made me think about the other story of last week, the one that would have been an earthquake of its own, in a good way, if this hideous violence hadn't happened. I'm speaking, of course, of the wonderful outcome in the two Senate races in Georgia. For the first time in American history, this Southern state voted for a Black man and a Jew for the U.S. Senate.

Considering its fraught racial history — including being the home of the Moore's Ford lynchings, which the New York Times noted "is considered by many to be the last mass lynching in American history," and the earlier lynching of Leo Frank, a famous case of anti-semitic violence — this was a singular moment that we didn't have time to savor and analyze. For all of its politically reactionary, racist violence and conspiracy-mongering, the country is progressing anyway. It usually does, much too slowly and backsliding often, but inexorably nonetheless. In the midst of all this horror, we shouldn't forget that.

I'm sure there will be hours of commentary and analysis of the Capitol Insurrection and rightly so. This Trump cult has gone further than any group of Americans since the civil war to assault our government institutions and the democratic process. The big question now is if anyone in power will face consequences for what they did, starting with Trump and going all the way down the line. If there is no price to be paid for this you can bet that there will be more political violence from this faction down the road. If there is one thing in the footage that is crystal clear it's that they've tasted blood --- and they liked it.