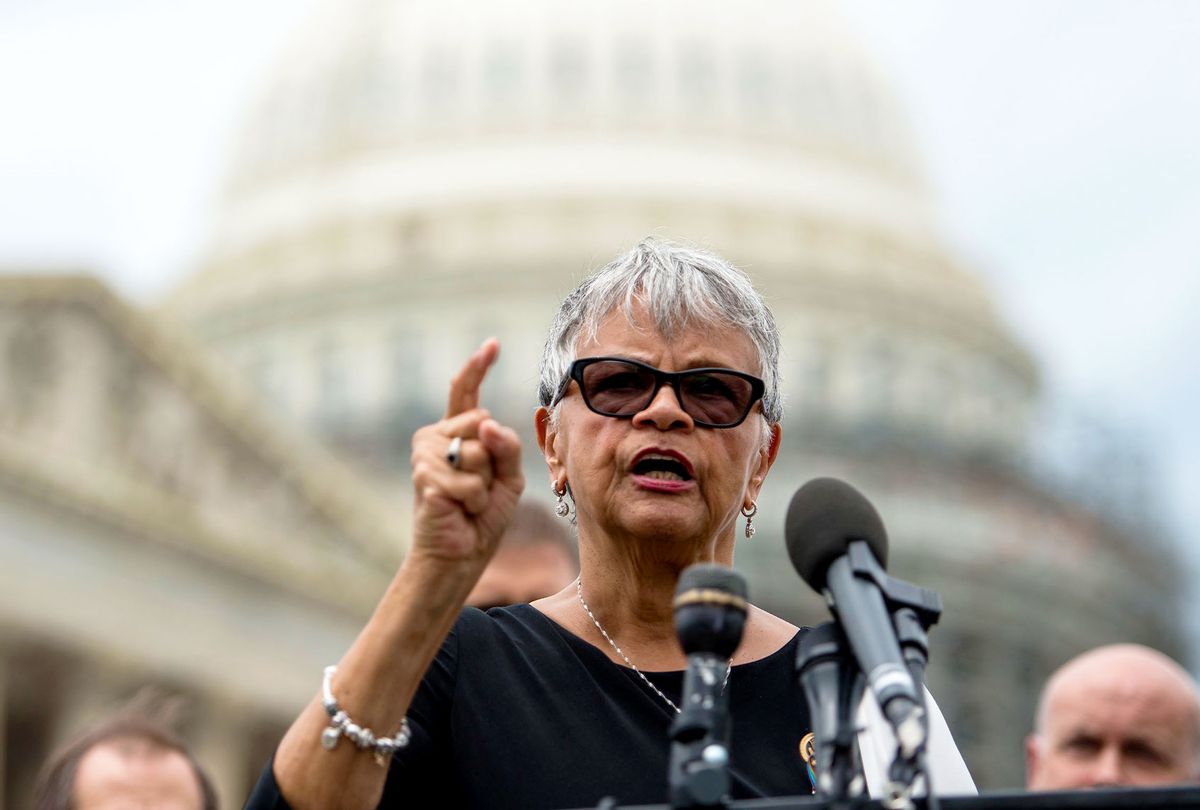 Congresswoman Bonnie Watson Coleman joins members of MoveOn.org and members of Congress at an event to demand congress renew an assault weapons ban, along with delivering more than one million signed petitions, at United States Capitol Building on July 12, 2016 in Washington, DC. (Leigh Vogel/Getty Images for MoveOn.org)
--

Rep. Bonnie Watson Coleman, D-N.J., said Monday that she tested positive for the coronavirus after "sheltering with several colleagues who refused to wear masks" during a lockdown amid the Capitol riot last week.

Coleman said in a statement that she believes she tested positive as a result of being "exposed during protective isolation" in the Capitol. Coleman's announcement comes after the Office of Attending Physician warned that House lawmakers may have been exposed to someone who has since tested positive during the lockdown.

"On Wednesday January 6, many members of the House community were in protective isolation in room located in a large committee hearing space," Brian Monahan, the attending physician to Congress, wrote in an email to lawmakers obtained by The Washington Post. "The time in this room was several hours for some and briefer for others. During this time, individuals may have been exposed to another occupant with coronavirus infection."

Rep. Donald McEachin, D-Va., said that he was praying for a "swift and painless recovery" for Watson Coleman. "Our House colleagues who refused to wear masks last week as members were forced to shelter in the Capitol put all of us at risk and should be ashamed of themselves," he tweeted.

It's unclear who tested positive or how many lawmakers were in the room. Two House aides told the Post that Monahan was referring to a room where dozens of lawmakers were seen huddled after evacuating the chamber. The lawmakers were led out in gas masks after the pro-Trump rioters attacked police officers, killing one and injuring dozens of others, and attempted to breach the House chamber while lawmakers were still inside. Four members of the mob died in the mayhem, including a woman who was shot by Capitol Police while trying to enter the House chamber through a broken window.

"It's what I would call a COVID super spreader event. About half of the people in the room are not wearing masks. Even though they've been offered surgical masks, they've refused to wear them," she said. "Some of the newer Republican members are openly flaunting that they are refusing to wear a mask."

Rep. Chuck Fleischman, R-Tenn., said he tested positive on Sunday but a spokesperson likewise told the Post that he was not in the room in question.

Public health experts have expressed concerns that the riot itself could become a super spreader event whose impact will be felt around the country.

"There's going to be chains of transmission that come out of that kind of mass gathering," Scott Gottlieb, the former head of the Food and Drug Administration, told CBS News on Sunday. "The crowd wasn't adhering to what we know are good practices in terms of mask-wearing and other things. I think they deliberately eschewed those things. So, yeah, we're going to see chains of transmission come out of that kind of a gathering, for sure."

Robert Redfield, the director of the Centers for Disease Control and Prevention, told McClatchy that it would likely be a "surge event."

"Then these individuals all are going in cars and trains and planes going home all across the country right now," he explained. "So I do think this is an event that will probably lead to a significant spreading event."