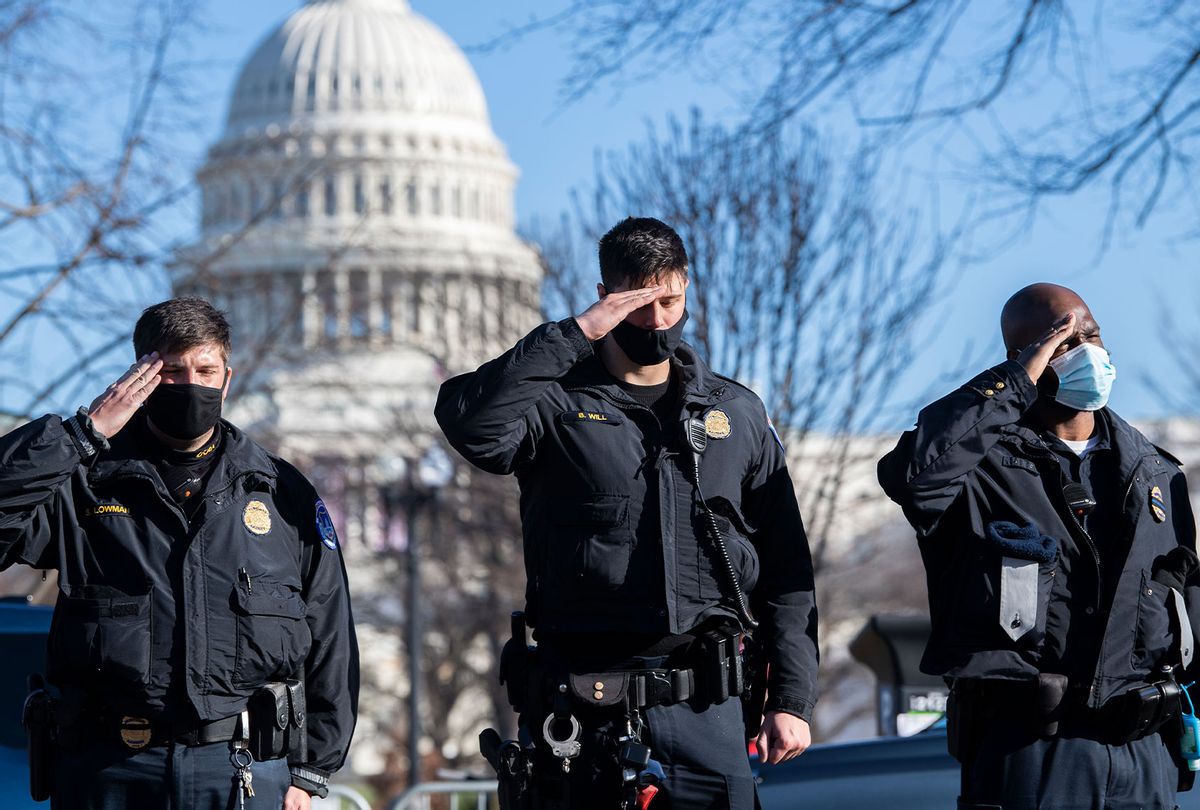 U.S. Capitol Police officers salute as a hearse carrying the body of Officer Brian D. Sicknick, who was killed by rioters Wednesday, passes members of the Capitol and Metropolitan police during a procession on Third Street on Sunday, January 10, 2021. (Tom Williams/CQ-Roll Call, Inc via Getty Images)
--

In the immediate aftermath of the storming of the U.S. Capitol by thousands of angry supporters of President Trump, there's been much speculation about how the very seat of our democracy was left so vulnerable to an attack that resulted in the murder of U.S. Capitol Police Officer Brian Sicknick, a 42-year-old New Jersey native.

"Officer Sicknick was a South River native, and proud graduate of Middlesex County Vocational Technical Schools in East Brunswick," said New Jersey Senate President Stephen Sweeney in a statement of condolence. "Before serving with distinction with the Capitol Police, Staff Sergeant Sicknick bravely served six years with the New Jersey National Guard, including twice being deployed to the Middle East."

In addition to Sicknick, an Iraq war veteran, police shot and killed Ashli Babbitt, 35, an ardent Trump supporter who served for several years in the Air Force and had also been deployed overseas.

Three other people died in medical emergencies that played out during the melee that forced the House and Senate to suspend their proceedings as members of the Congress had to be moved to secure locations. Another Capitol Police officer has died subsequently under unclear circumstances, reportedly by suicide. Fifty police officers were injured.

Capitol Police Chief Steven Sund was forced to resign, as were the top security officials in both houses of Congress. Senate Majority Leader Mitch McConnell asked for the resignation of Senate sergeant-at-arms Michael Stenger, and House Speaker Nancy Pelosi announced the departure of Paul Irving, her chamber's sergeant-at-arms.

We should be troubled by the fact that the Capitol was not apparently treated like the homicide scene that it was, and by the lengthy delay in getting the necessary law enforcement backup on the scene to restore order. Indeed, it's critical not to see the events of Jan. 6 in isolation, as a one-off. We must ask who knew what, and when, and treat it as potentially an ongoing criminal conspiracy executed by numerous individuals who may want to cover their tracks.

On Thursday, Maryland Gov. Larry Hogan told reporters that as soon as he became aware the Capitol was under assault, he "immediately offered support to the District of Columbia, which submitted a direct request for law enforcement support through the emergency management assistance compact."

Under federal law, approval for sending Maryland's National Guard troops onto a federal property like the Capitol rests with the Defense Department and the president, not the mayor of Washington.

"I was ready, willing and able to immediately deploy [National Guard] to the Capitol, however we were repeatedly denied approval to do so," Hogan told reporters.

While Hogan was waiting, he got a phone call from House Majority Leader Steny Hoyer, D-Md., who according to Hogan was hiding from the mob in an "undisclosed bunker" with Speaker Nancy Pelosi and Senate Minority Leader Chuck Schumer (who will soon trade jobs with McConnell).

Hogan said Hoyer told him "that the U.S. Capitol Police was overwhelmed, that there was no federal law enforcement presence and that the leaders of Congress were pleading with me, as the governor of Maryland, for assistance from Maryland's National Guard and state police." Ninety minutes later, according to Hogan's timeline, he finally got a call from the Pentagon authorizing the deployment. During that interval, rioters were permitted to ransack the Capitol, essentially at will.

The New York Times has previously reported that Trump did not authorize the deployment of the National Guard. Instead, it was apparently Vice President Mike Pence, who had been presiding over the Senate when he was rushed to a secure location.

In addition to the delayed backup to the assault in, multiple news outlets, including the New York Times, have reported instances where individual Capitol Police officers were videotaped opening up the barricades to the mob and even posing for selfies with the rioters.

No less an expert then retired Lt. Gen. Russel Honoré told MSNBC's Brian Williams that he was "surprised the Pentagon did not have the National Guard on standby" and that there had been a "major failure in intelligence" by the FBI.

Honoré, who was widely acclaimed for his effective leadership after the Bush administration's botched response to Hurricane Katrina in 1995, even raised the possibility that the Capitol Police Department's decision to turn down assistance leading up to the assault was evidence of "complicity" at the highest levels of the department's command structure.

The FBI is now investigating the Capitol invasion and there have already been dozens of arrests. Ironically, the very social media streams which helped give these malefactors so much traction is providing law enforcement their identities, along with an inventory of what they were able to carry away.

So how was it that a "superpower" that spends hundreds of billions of dollars a year on defense and security, including a $500 million on the Capitol Police, could not protect the home of the U.S. Congress?

To answer that you have to revisit the deliberations of the 9/11 Commission, which asked a similar question about why the World Trade Center and the Pentagon were so vulnerable on that fateful day 20 years ago.

One of the most troubling questions was why the North American Aerospace Defense Command, which is supposed to protect U.S. and Canadian air space, was so oblivious as to what was happening that day. What the 9/11 Commission learned was that NORAD was structured to look outward, as if the only threat worth tracking was external, coming from beyond our borders.

"It's important to understand that the job of NORAD at the time, on 9/11, was to look for threats from outside our countries," explained a NORAD official in an agency newsletter in 2011. "We were tasked to provide warning of attacks both missile and aircraft as it occurred, coming into the United States and Canada. And because of that mission, all of our radars were located along the periphery of the United States and Canada. We had quite a few radars, numbering over 100 radars looking outward. On 9/11, what we found out was that we needed radar coverage in the interior of the United States."

In the years after 9/11, we reorganized numerous large federal agencies into the Department of Homeland Security and then embarked on what turned out to be a global "war on terrorism," continuing until further notice. In retrospect, it actually proliferated terror, collapsed governments and helped set in motion the biggest refugee crisis since World War II.

In a 2004 letter to the editor, Brian Sicknick, who gave his life protecting democracy, warned that George W. Bush's "foreign policies are one reason the world has become as dangerous as it is. I don't know why everyone is brainwashed that only Bush can protect us."

In another letter to the editor, Sicknick wrote, "[O]ur troops are stretched very thin, and morale is dangerously low among them. I'm starting to see an increasing trend of soldiers asking, 'Why are we still here?'"

For nearly two decades, America's overseas body count grew as the civilian casualties mounted and the number of nations ablaze expanded. Yet across three presidents we have not fully withdrawn, repeatedly told that we were fighting "them over there" so we did not have to fight them here.

We were still looking for Arab terrorists, even as an angry mob of thousands of white supremacists, flying Trump banners and the Confederate Star and Bars, seized the cockpit of democracy.