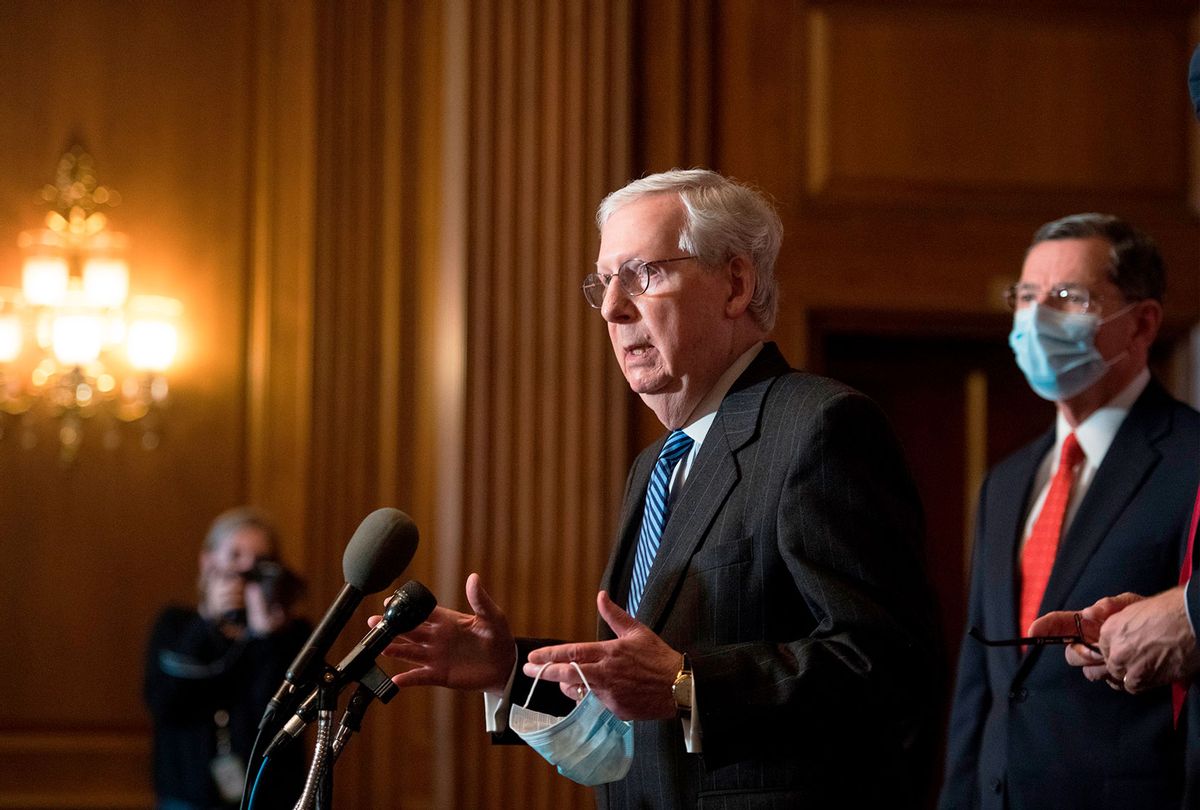 US Senate Majority Leader Mitch McConnell speaks during a news conference with other Senate Republicans at the US Capitol in Washington, DC, on December 15, 2020. (ROD LAMKEY/POOL/AFP via Getty Images)
--

The coronavirus relief and omnibus spending bill passed by Congress in December included dozens of tax-related measures, including an extension of a tax break for racehorse owners that has been a top priority for the racing industry. McConnell represents Kentucky, home to some of the biggest breeders and stables in the business.

The coronavirus relief and omnibus bill included a section regarding the "classification of certain race horses as 3-year property," (page 4,911) which extended an IRS depreciation tax break for racehorse owners through 2022 after it was set to expire on Dec. 31.

Depreciation allows people to write off their assets' reduction in value over time. The horse racing tax break allows owners to "depreciate the cost of a racehorse 2 years old or younger over three years, compared to seven years for other types of horses," Bloomberg explained when the measure was extended in 2019 after a strong push from McConnell and other Republicans.

Some Republicans objected to the measure.

"The COVID relief we've all been waiting for: a tax break for racehorse owners," Rep. Ken Buck, R-Colo., sarcastically tweeted.

Sen. Josh Hawley, R-Mo., singled out the provision to criticize the list of "corporate & government giveaways" included in the bill while larger relief checks he and Sen. Bernie Sanders, I-Vt., called for were not.

Accountable.US, a progressive watchdog group, highlighted the tax break to call on Congress to focus on struggling communities rather than wealthy interest groups when it takes up the next round of negotiations after President-elect Joe Biden takes office.

"To see real economic recovery, the new Congress must turn the page on the Trump-McConnell mismanagement of the health crisis that made the rich richer and shortchanged those truly in need," Kyle Herrig, the president of Accountable.US, said in a statement to Salon. "McConnell has no excuse to obstruct real relief for struggling communities after letting his rich, horse racing friends double down on taxpayer support."

The measure was a "top legislative priority" for the National Thoroughbred Racing Association, which spent at least $240,000 last year to lobby on, among other things, "general horse racing tax issues," according to the organization's lobbying reports. The group backed the extension, arguing that "depreciation is important because it allows racehorse owners to better align the deduction of any yearling purchase with income opportunities when the horse is racing."

The NTRA has repeatedly praised McConnell for his "continued support" of the industry after Congress extended the tax break in 2018 and singled out the "efforts of Leader McConnell" in extending the provision again last year.

McConnell has also benefited from massive donations from the family of Dick Duchossois, one of the largest shareholders of Churchill Downs, the Louisville racetrack that hosts the Kentucky Derby. His son, Craig Duchossois, has donated at least $4.966 million to McConnell's Senate Leadership Fund since 2016, according to Federal Election Commission records. Members of the Duchossois family have also donated more than $37,000 to McConnell's campaign since 2005, according to FEC data.

The equine industry has also benefited from other coronavirus relief measures, receiving millions in Paycheck Protection Program loans from the Small Business Administration even though data shows the amount of money spent on horserace betting fell just 1.3% last year despite the coronavirus pandemic.

The beneficiaries included Matties Racing Stable, which received an $80,472 PPP loan in May, according to PPP data. The stable, which is partly owned by professional gambler and horse owner Paul Matties Jr., races a horse named Stimulus Check, which won two prizes for a total of $40,100 last year. Since Stimulus Check was placed into service before this year, the stable can also take advantage of the depreciation tax break.

Matties told Salon that he and his brother sought the loan to keep the stable going after the New York Racing Association canceled races indefinitely and does not think the tax break would help his stable at all.

"It was just timely to choose that name," he said of the horse. "There was no other motivation. I was actually surprised it hadn't been taken already."

The PPP has helped thousands of businesses weather the pandemic and keep their employees on payroll, but has also been widely criticized for favoring larger businesses at the expense of smaller firms and minority-owned companies. More than half of the $522 billion in PPP funding went to just 5% of recipients, including dozens of national chains, according to an analysis by The Washington Post. Some small businesses sued banks that administered the program for favoring big existing clients at the expense of truly small businesses. Minority-owned businesses were particularly impacted by these issues and struggled to find banks that would accept their applications, according to an Associated Press analysis.

The horse racing tax break was one of nearly 80 tax-related provisions in the latest round of relief. The bill also allowed companies to deduct PPP loans from their taxes, extended the "three-martini lunch break" that allows businesses to write off dining expenses, and included additional breaks for auto racing tracks, distillers, and brewers.

Budget watchdogs have long criticized the horse racing tax break for helping the wealthy, but the provision has repeatedly been extended with McConnell's support.

"It just smacks of a giveaway to the wealthiest of Americans," Steve Ellis, the vice president of the nonpartisan Taxpayers for Common Sense, told Bloomberg, adding that the provision doesn't make "any sense from an economic perspective."