"Maybe I smoked some cigarettes, maybe I spat on a riot officer," says member of streaming group Murder the Media 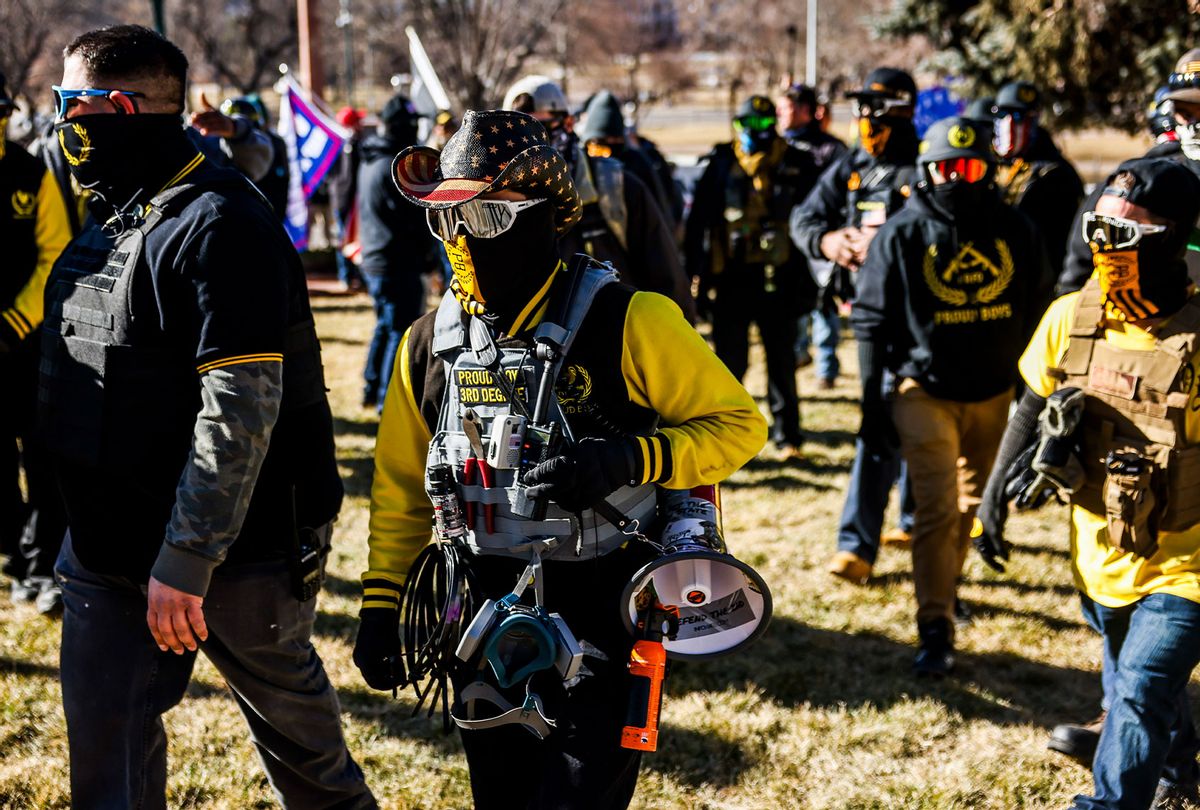 Members of the Proud Boys join Donald Trump supporters as they protest the election outside the Colorado State Capitol on January 6, 2021 in Denver, Colorado. Trump supporters gathered at state capitals across the country to protest todays ratification of Joe Bidens Electoral College victory over President Trump in the 2020 election. (Michael Ciaglo/Getty Images)
--

The night after the siege on the U.S. Capitol, alt-right personality Nick DeCarlo (aka Dick Necarlo) recounted in great detail in a live-streamed interview posted to Facebook that he had raided the home of American democracy alongside Nick Ochs, leader of the Hawaii branch of the Proud Boys, who would be arrested by Department of Homeland Security agents in Honolulu the next day. At the time of his interview, DeCarlo said that Ochs was doing "great" and "riding this high just like me," and offered a number of anecdotes from the raid that appeared to involve vandalism of federal property, promising forthcoming "hilarious" footage and a video "tour" of their raid on the Capitol.

He also said that he spat on a police officer.

Both Nicks are members of the live-streaming cohort called Murder the Media (MT Media), whose dlive.com account was suspended after the attack. They posed together at the Capitol building beside a set of double doors with "Murder the Media" intaglioed on one side. Later, a law enforcement officer would hold the opposite door open for rioters as they exited the building, creating an irresistible photo op.

DeCarlo traveled to D.C. to meet up with Ochs, and they shared a hotel room at the Fairfield Inn in Alexandria, Virginia, the night before the attack. That night, DeCarlo said that he and Ochs would meet up the next morning with Proud Boys chairman (and chief of staff for Latinos for Trump) Enrique Tarrio, who was arrested and banned from Washington that very night on weapons and vandalism charges relating to an earlier incident when he stole a Black Lives Matter banner from a church and burned it.

"Tomorrow we'll be going to [Tarrio]. We'll get a nice early, early interview with him," DeCarlo said in a video he streamed the night before the attack, adding: "We got a lot of good shit planned for tomorrow. There are so many fucking people here."

The next day, on Jan. 6, DeCarlo and Ochs stormed the Capitol together. At one point Ochs shared what would become a self-incriminating selfie of them smoking cigarettes inside the building, captioned "Hello from the Capital lol," which was submitted as evidence in the indictment filed against Ochs the following day. The FBI's supporting affidavit in support of that indictment exclusively cited Ochs' own social media posts and public statements, as well as a CNN interview he gave after the siege.

That night, DeCarlo gave an interview to another MT Media host who goes by the name "Vill Nomerly," in which DeCarlo discussed the raid and appears to confess to various legal violations.

"Me and Nick Ochs went there specifically to stop the steal. It happened," DeCarlo claims. (Since there was no "steal" and Joe Biden's electoral victory was eventually confirmed, this is dubious.) He added, "It felt great and I did a lot of shit I shouldn't have — maybe I did, maybe I didn't — in the Capitol. Maybe I smoked some cigarettes, maybe I spat on a riot officer. Maybe I didn't." He claimed that he and Ochs spent "an hour and half, two hours" in the building and "got pretty far."

"I would like to say congratulations to America and you're welcome," DeCarlo added.

In an email exchange with Salon after this story published, DeCarlo insisted that his real name was his alias, Dick NeCarlo, adding: "Everything you know about the Capitol riot is A LIE! YOU'VE ALL BEEN FOOLED, AMERICA HAS BEEN DUPED!"

For "proof" of this ridiculous claim, DeCarlo attached an image of aspiring insurrectionist Jacob Chansley inside the Capitol, in his absurd coyote-skin hat and red, white and blue face paint, the surroundings replaced with a soundstage and green screen in an intentionally poorly photoshopped troll. (Murder the Media, incidentally, had published an image of DeCarlo and Ochs posing for a selfie with Chansley on the Capitol steps.) 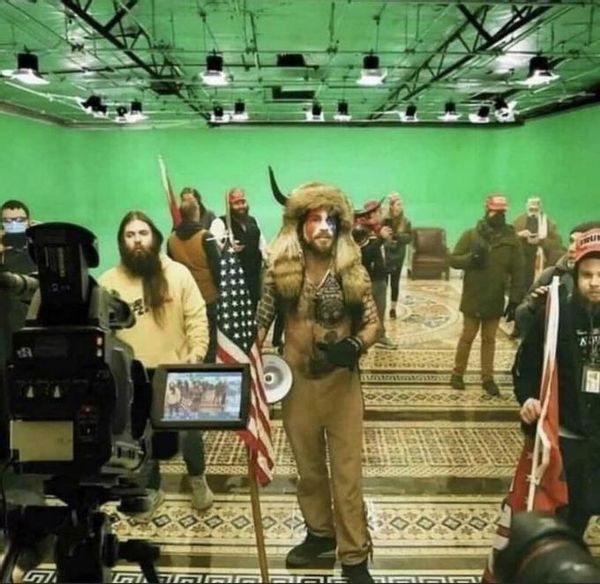 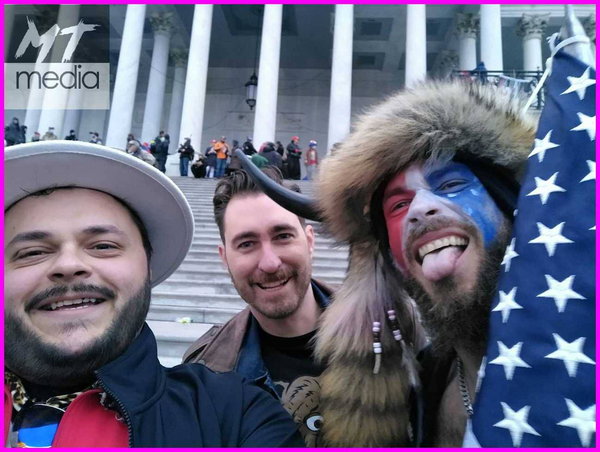 DeCarlo also beseeched Salon to "take Alt Right out of describing me you sack of shit," and offered an official statement. The conversation is ongoing and this story will be updated with further information.

Neither DeCarlo nor Ochs paid for their entire travel to the Stop the Steal event; both raised money on the fundraising site GiveSendGo.

(GiveSendGo is a Christian fundraising platform that now doubles as a safe harbor for extremists who have been banned from mainstream services. Right-wing agitator Ali Alexander, for instance — an organizer of Stop the Steal — has recently been banned from PayPal, Venmo and CashApp, but still maintains a GiveSendGo account. However, PayPal recently cut ties with GiveSendGo in an effort to distance itself from the site's clientele, part of an ongoing wave of corporate deplatforming directly stemming from the Capitol riots.)

"Ochs and DIck Lambaste are going to DC because the president asked and it said was gonna be 'wild' and that people should wear body cameras," Ochs wrote on the fundraising page. "Our sweet boys wouldn't miss it and promise to deliver the heinous, ugly truth to a heinous, ugly city."

He added that while the pair would travel "as cheaply as possible," they were still going to D.C. from Hawaii and Texas and "100% losing money on this," and felt free to "ask for a little help without getting exiled to the MEGA-GRIFT HALL OF FAME." The ploy raised $300 from six people — including someone using the handle "Big Papí" — and appears to have garnered one "prayer" click. Ochs also posted on Telegram that someone offered him a "buddy pass" to help offset the cost of his flight from Hawaii.

DeCarlo wrote on his own fundraiser that "it's up to one man with the help of Nick Ochs to expose those 'tolerant' leftists and teach them a lesson they'll NEVER forget: The MAGA TRAIN will KEEP ON A ROLLIN'!" In a livestream video broadcast from the parking lot of the Fairfield Inn, DeCarlo proffers a "big thanks" to his benefactors for "all the donations I already spent through them."

"It's fucking great," he added.

Following Ochs' arrest on Thursday, a Proud Boy member named Fred Swink set up a new GiveSendGo page to help cover the Hawaii leader's legal fees. It has so far raised more than $18,000 and collected more than 430 "prayer" clicks.

Aside from the selfie, DeCarlo's face seems to be visible in footage of the siege broadcast on Fox News. While he has been identified posing with Ochs, his name has so far not appeared in mainstream press accounts. In what is in all likelihood a joke, the Thunderdome TV/MT Media Facebook page lists its address as the Bohemian Grove in Monte Rio, California, a campsite that hosts an all-male, members-only annual summer retreat for some of the most wealthy and influential men in the world.

The Trump supporters who launched the failed insurrection last Wednesday, at the outgoing president's repeated calls, terrorized federal elected officials and caused the deaths of five people, including a police officer. There was a sixth casualty on Sunday, when a second officer reportedly took his own life in what the former Capitol Police chief characterized as a "line of duty" death no different than the other officer's murder. The rioters committed wanton vandalism and stole federal property, taking a laptop from House Speaker Nancy Pelosi's office and leaving human waste and random debris in an iconic landmark of democratic self-government.

DeCarlo is mentioned in the affidavit against Ochs as "another individual" smoking in the selfie, but has not been arrested as of this writing.