Can Raphael Warnock and Jon Ossoff reinvigorate the Black-Jewish alliance? 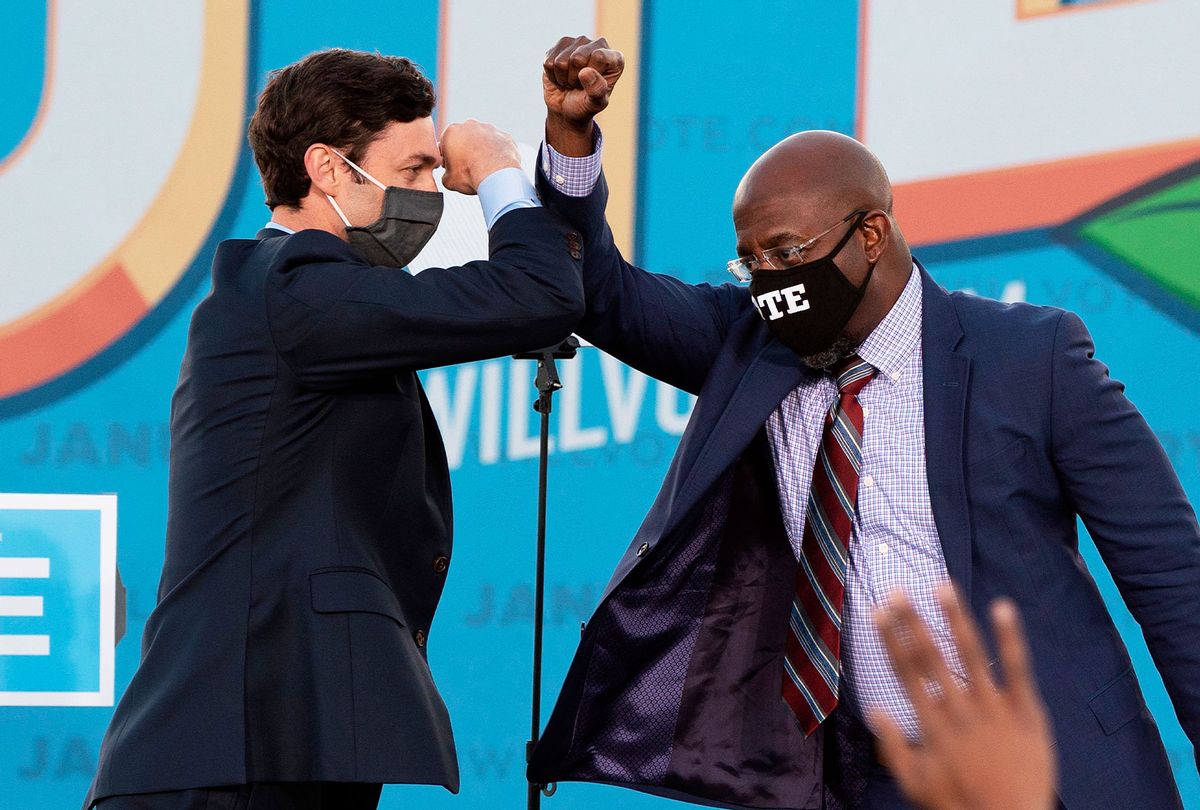 The stunning victories of the Rev. Raphael Warnock and Jon Ossoff in the Georgia Senate runoff elections on Jan. 5 provide some hope amidst the gloom of the attempted coup that occurred the next day at the U.S. Capitol. The unlikely triumph of these two men — an African-American pastor who preaches from Dr. Martin Luther King Jr.'s former pulpit and a youthful, liberal Reform Jew — evokes fond memories of the storied Black-Jewish civil rights coalition. That now-defunct "Grand Alliance" battled the same forces of white supremacy whose ideological descendants stormed the Capitol on Jan. 6. While Warnock and Ossoff's twinned political activism does display some surface similarities with the mid-century alliance, in many ways it is different. These differences suggest ways to bridge the divide that led the coalition's collapse in the late 1960s.

The Warnock/Ossoff campaigns inspire many to reminisce about the relationship between Dr. King and Rabbi Abraham Joshua Heschel. There is no image more iconic in American Judaism than their march alongside one another in Selma. Their intervention occurred a few weeks after Black protesters, including the late John Lewis, were viciously assaulted by state troopers as they tried to cross the Alabama River. The fact that campaign ads for Republican incumbents Kelly Loeffler and David Perdue in the recent Georgia races were not above racial and anti-Semitic innuendo makes the comparison more compelling. (A Loeffler ad apparently darkened Warnock's skin, while a Perdue ad lengthened the size of Ossoff's nose.) These visual slurs underscored a truism noted in the occasional Black-Jewish dialogues that took place during the Trump era: A common foe was re-emerging. That foe was a white American Christian nationalism, seemingly hellbent on affirming that Blacks and Jews were neither whites nor Americans nor worthy of Christian fellowship.

As the Black-Jewish alliance imploded in the late 1960s, many Blacks complained that Jews had lost sight of that foe. Perhaps with that we drive to the heart of what caused the crack-up of the Grand Alliance. Blacks and Jews have bickered over many issues in the past half century. They have argued over affirmative action. They have staked out opposing positions over the state of Israel. They have disagreed on the promise of liberalism (whose promise was kept to one group, but not to the other). Their contentions devolved into quack conceptions of racial inferiority peddled by Jewish neoconservatives, while Black demagogues trafficked in slanders about Jewish complicity in the slave trade. Yet perhaps no charge complexified and threatened their alliance as much as the one that Jews had become white.

The matter was particularly sensitive in the South. Unlike their Northern co-religionists, Southern Jews maintained an uneasy, albeit conspicuous, silence in the face of Jim Crow and debates about desegregation. If the Jewish community in Atlanta or New Orleans was generally taciturn on these racial justice issues, it wasn't just motivated by fear. The truth is that from the antebellum period forward Southern Jews were granted acceptance as whites by their neighbors. The admission price to whiteness being that they stay in their lanes and never support Black causes.

If we look at Warnock and Ossoff in the context of the Grand Alliance we notice some striking differences. A recurring complaint of Blacks in the Alliance era was that they felt like adjuncts to their wealthier Jewish comrades. The latter often set the movement's priorities in ways that may have been more unilateral than would be desired. From the formation of the NAACP in 1910 to their mutual participation in legal reform culminating in the Civil Rights Act, the impression in the Black community was that there was little equality in this partnership.

Yet Ossoff appears quite content to be the junior member of the duo. Younger and less politically experienced, he lets the agenda of Rev. Warnock set his course of action. Another stark difference has been the two candidates' ability to traffic between liberal and progressive ideas about racial justice. The Grand Alliance of the 1960s was felled, in part, because these poles could not be reconciled; a younger generation of Black power activists broke with Jews who clung to a liberalism whose benefits were rarely felt by African-Americans.

Warnock has expressed measured support for the state of Israel that would have been unacceptable to a more radical historical figure like Stokely Carmichael. (Many view Carmichael's anti-Israel diatribes of the 1960s as an accelerant to the crack-up of the Alliance.) Like Warnock, Ossoff embraces aspects of both progressive politics and classic civil rights approaches. He was intellectually groomed by civil rights icons such as the aforementioned John Lewis. His candidacy garnered support from the Atlanta Black leadership establishment, specifically Stacey Abrams and Rep. Hank Johnson. By the same token, the influence of the Black Lives Matter movement is also evident in his politics. Earlier Jewish leaders may have felt they had to choose between liberal civil rights approaches and more radical Black Power politics, but Ossoff seems willing and able to straddle both. In a June 7, 2020, tweet, Ossoff rhetorically demanded: "Would [David] Perdue ever utter the words Black Lives Matter?"

In recognizing the concerns of the American left, Ossoff also speaks to a massive but politically marginalized group of Jewish-American rabbis, scholars, activists, artists, intellectuals and laypersons. Most are liberal Zionists, deeply unsettled by the Palestinian policies of Israel's government under Benjamin Netanyahu and the Trump administration's ardent support for them. Ossoff's candidacy exposes the truism that, views on Israel aside, the majority of American Jews support nearly every plank of the Black Lives Matter movement.

Another difference with the Grand Alliance is that the two senators-elect focused outward, not inward. In their campaign rhetoric one sees a widening of horizons, a desire to correlate the issues confronted by Blacks and Jews with broader systemic disparities that affect the Latinx community, women, working-class people and LGBTQ persons. Warnock is pushing Black churches to become more inclusive of gays and lesbians and tackle gender inequality. Both politicians are challenging their communities to focus more on poverty and economic injustice. Warnock, whose activism dates back to the Rodney King protests while a student in Atlanta, is deeply informed by concerns raised by Black Lives Matter.

The religious dimension of their union shows continuities and ruptures with the past. Warnock is connected to King's compelling vision of the Black church and the "Beloved Community." Yet he is also influenced by the more progressive theology of the late Dr. James Cone's Black theology of liberation. (He studied under Cone at Union Theological Seminary.) Bringing together the lamb and the lion of Black theological and political life allows Warnock unprecedented access to varying constituencies in the African-American community.

While Ossoff is not a theologian as Rabbi Heschel was, he shares the latter's unabashed support for racial justice. He attributes his political convictions to the Reform Jewish tradition in which he was raised. In this way his profile meshes with the Jews of the civil rights movement, the overwhelming majority of whom — whether they were members of SNCC or Freedom Riders — would have described themselves as secular.

Visually, Ossoff and Warnock represent the Black-Jewish alliance of the 1960s. But substantively, their program is different, and perhaps far better configured to confront the challenges of repairing a post-Trump America. They embody a potent mixture of both secular and religious commitments to racial and economic justice. They toggle between liberal and progressive politics. Their union taps into the reservoir of civil rights tropes of equality and Black Power's clarion call for radical political and cultural transformation.

In the words of Dr. Lawrence Edward Carter Sr., founding dean of the Martin Luther King Jr. International Chapel at Morehouse College and mentor to Rev. Warnock, these two men intentionally sought to "revive the most successful coalition and longest running ethnic partnership in the history of the United States." Like King and Heschel, they stand on the banks of the nation's Jordan River, "praying with their feet." They come to Washington to challenge, yet again, the adversary their forebears confronted more than half a century ago.

The authors wish to thank their research assistants Alexander Lin and Ria Pradhan.

Terrence L. Johnson (@tljohn44) is a professor at Harvard Divinity School and co-author, with Jacques Berlinerblau, of "Blacks and Jews in the United States: An Invitation to Dialogue."