Would MLK have wanted "healing" after this outrage? Not without justice

In this year above all others, set aside the sanitized version of Martin Luther King Jr. and hear his real message 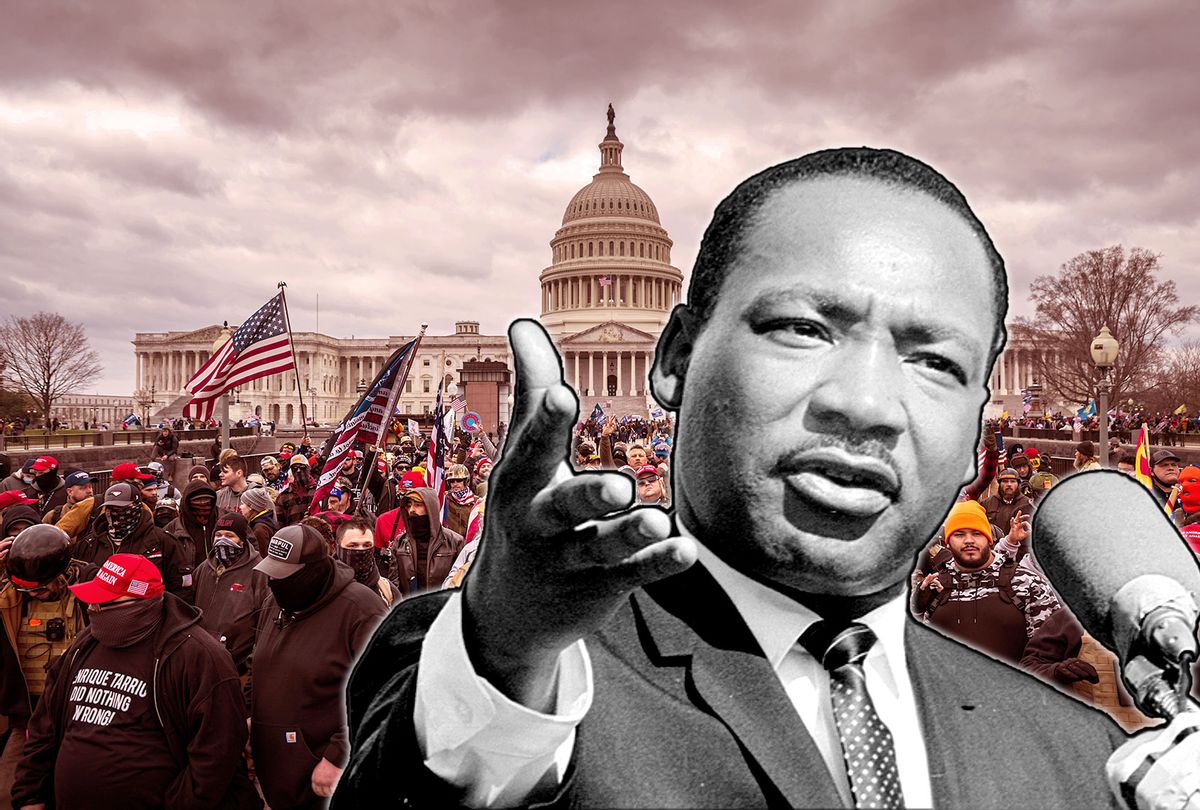 Time is broken in the Age of Trump. The ability to distort reality is one of fascism's greatest powers. World-historical events are collapsed down into a few days or weeks. Perspective is lost.

Over the course of two weeks, the American people experienced an attempted fascist coup by Donald Trump and then his subsequent impeachment for inciting insurrection. On Inauguration Day, two weeks after Trump's supporters overran the U.S. Capitol building, Joe Biden will finally become president of the United States of America.

This essay is being published on Monday, Jan. 18, Martin Luther King Jr. Day. It is now two days before Inauguration and five days after Trump's impeachment. These days feel like years.

Dr. King was martyred by a white supremacist assassin in 1968. More than 50 years later, white supremacists with their Confederate flags, Nazi tattoos and T-shirts and other symbols of hate, attacked the U.S. Capitol with lethal results. Once again, we are reminded that white supremacy and the color line are a type of changing same in America.

The forces of white supremacy and American Apartheid that Dr. King fought against those decades ago were never fully exorcised or vanquished.

Martin Luther King Jr. Day is a civic holiday in America, one when the country celebrates its own belief (which is really a comforting lie) that it transcended racism and white supremacy through the blood sacrifice of one man and the other (acceptable) heroes of the civil rights movement.

Dr. King's civic holiday has its obligatory rituals. There will be the documentaries and other films and movies about his life and the civil rights movement. Famous people will offer words of wisdom. There will be disappointment. There will be hope. There will be marches and gatherings — made even more poignant and surreal by life in a time of plague.

And on Martin Luther King Jr. Day 2021, the juxtaposition of Donald Trump's ignominy with King's moral vision and life of sacrifice will be almost impossible to ignore.

One of the obligatory public rituals on this day is the summoning of Dr. King's "I Have a Dream" Speech, which is often misrepresented and willfully distorted.

In the (white) American popular imagination, King's dream of racial equality and real democracy are understood as being something accomplished with the civil rights movement in the 1960s. In reality, he was speaking of a time in the future. More than 50 years later, America has not yet arrived at such a place.

The failure to achieve King's dream looms over the rage-filled faces of Trump's mob and its assault on the U.S. Capitol — along with everything else that horrible scene tells us about America in the Age of Trump.

For example, the Trumpists had nooses and also a huge cross. These are symbols of White Christian nationalist hatred and violence. In his landmark book "The Cross and the Lynching Tree," theologian James Cone described the power and history of such symbols and beliefs:

"In the lynching era," between 1880 to 1940, white Christians lynched nearly five thousand Black men and women in a manner with obvious echoes of the Roman crucifixion of Jesus. Yet these "Christians" did not see the irony or contradiction in their actions.

Echoing Cone, Carey Wallace writes in her new essay for Time Magazine, "White American Christianity Needs to Be Honest About Its History of White Supremacy": "You cannot cure cancer by pretending it is not there. The white American church can't pretend that the mob at the Capitol is not part of us. It is us."

Dr. King and the soldiers of the civil rights movement and Black Freedom Struggle knew well the signs, symbols, energy and people who formed the mass of Trump's white supremacist mob at the U.S. Capitol. In fact, in 1967 Dr. King observed that "many Americans would like to have a nation which is a democracy for white Americans but simultaneously a dictatorship over Black Americans."

The Trump-inspired coup assault on the U.S. Capitol was a celebration of white privilege and white supremacy in other ways as well. Capitol Police and other law enforcement forces would have shot dead a Black or brown mob that dared to overrun the U.S. Capitol. There would be no headlines about "What happened?" or "A failure to prepare" or "Was it an inside job?" which now dominate the American news media. Instead, the headlines would be about Black and brown or Muslim "terrorists" and how their attack was mercilessly defeated by "our heroes" in the military, the police and the federal government.

Moreover, the immunity of white people as a group to consequences for their bad behavior demeans the value of Black and brown people's lives. In that way, Trump's fascist mob symbolically danced on the graves of innocent Black and brown people who have been killed by the country's law enforcement agents and vigilantes.

This may seem counterintuitive to some, but in fact these celebrations of white privilege, white supremacy and white power cause harm to white people as well. Umair Haque writes at Eudaimonia:

In other words, the failed coup only marks the beginning of a new pattern of violence. What do the fascists then attack? All the institutions of civil society. They blow up courtrooms. They hold politicians hostage. They assassinate judges. They kidnap intellectuals. They invade schools. They occupy local governments. Society endures a wave of terrorism after failed coup attempts like the one America just had.

A failed coup is a kind of phase transition. It is like a glacier melting or an ocean boiling. It signals the beginning of a new phase in a society's story. … Terrorism of all kinds usually ensues, from, again, assassinations to bombings to kidnappings and so on. …

That is, I think, what is beginning to happen in America. These fascists have been normalised by white American culture for so long — seen as something like cute little pit bull attack dogs — that those very white Americans failed to see the danger they were in. The hounds of ruin and chaos were about to turn on the family which bred them, oblivious to their wild appetites. Fascists are not cute little house pets — which is what white American culture made them out to be, when, for example, the NYT profiled neo-Nazis as friendly neighbours next door, when Jake Tapper had Nazis on his show to "debate" with (hey, is exterminating my whole kind of people a matter of debate? Oh, cool!!), when Richard Spencer was portrayed as a dashing, handsome rogue, when Steve Bannon was glamorised as a cool, soi-disant genius of a worldly philosopher. White American culture made this monster. And the monster has now turned on it.

To paraphrase the civil rights leader, martyr and icon Malcolm X, the chickens are coming home to roost in America.

As has been true for centuries in America, it is Black and brown Americans who will be tasked with the responsibility of picking up the mess left behind by White America. After Trump's mob and other rabble rampaged throughout the U.S. Capitol, Black and brown janitors and maintenance workers put things back together again.

Martin Luther King Jr. was killed on April 4, 1968, fighting for the rights of sanitation workers in Memphis.

On this Martin Luther King Jr. Day in 2021, his words and legacy will be abused and distorted in grievous ways.

Republicans, Trumpists, and other members of the right-wing will claim, as always, that Dr. King would want "peace" and "unity" and "coming together" and "forgiveness" after Donald Trump's white supremacist coup attempt. Trump's apologists will also likely claim that King would demand national "healing."

These lies will be enabled by Black conservative mouthpieces and other professional racism deniers and nonwhite agents of white supremacy.

But the real Dr. King, the radical truth-telling Dr. King, the man who was one of the most unpopular people in America at the time of his martyrdom, believed in substantive justice. That type of justice does not come without hard work and sacrifice and making whole those people who were done wrong. In total, true healing is never possible without doing the hard work to make it so.

To that point, the real Dr. King believed that true justice for Black people in America necessitated reparations for slavery and generations of stolen wealth, income, labor, freedom and lives. The real Dr. King was also a democratic socialist who was committed to creating a true "We the People" democracy and humane society in America and around the world.

The real Dr. King would demand that substantive justice be done and that Donald Trump, his coup plotters, enablers and foot soldiers, and those others who participated in a lethal attack on the Capitol be held accountable. Such an outcome is not vengeance; it is justice.

Dr. King, who was a product of the Black Christian prophetic tradition of resistance and love and social justice, said this: "Forgiveness does not mean ignoring what has been done or putting a false label on an evil act. It means, rather, that the evil act no longer remains as a barrier to the relationship. Forgiveness is a catalyst creating the atmosphere necessary for a fresh start and a new beginning."

He also said, "He who passively accepts evil is as much involved in it as he who helps to perpetrate it. He who accepts evil without protesting against it is really cooperating with it."

As the crimes of the Age of Trump are investigated and punishments meted out, the American people would be wise to heed Dr. King's wisdom. We have ignored it far too long.