Another mess left by Trump: A cult of die-hard followers whose delusions run deep

The real carnage wrought by the Trump years is cognitive. It won’t be fixed by prosecution or policy alone 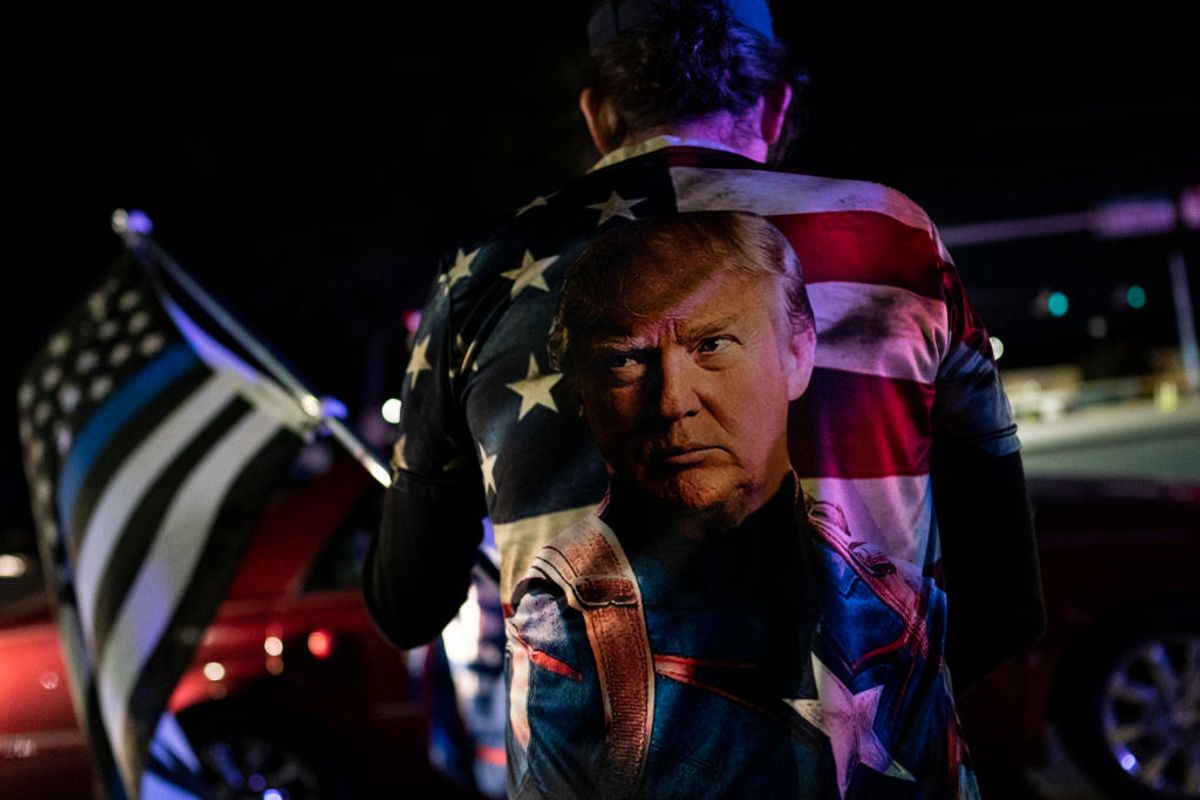 We all have them. The handful of Trump supporters who somehow still show up on our social media. The ones that we didn't block or unfriend because they seemed like the "reasonable" ones. We thought, maybe, that staying connected would be valuable, might offer a chance at dialogue, might provide insight.

One of my token Trump supporters sent me a direct message the other day. It was a meme that has a photo of the National Guard troops arriving at the Capitol building. The text reads, "If you need 10,000 armed soldiers to protect your inauguration from the people, then you probably weren't elected by the people." On The Right Can't Meme Reddit thread trashing this particular meme the comments follow a predictable pattern of pointing out the astonishingly bad logic that frames it.

How exactly do you blame Joe Biden for the presence of troops at his inauguration and infer that he is the one that wasn't elected? How exactly does harming elected officials make sense for a group that claims to honor law and order? The deep ironies that underpin these false beliefs are as stark as they are common.

As we all know, it has been tremendously exhausting to deal with the faulty logic, made up truths, and cognitive bullying that has characterized Trumpland these last years.  Well before Trump even took office, many of us were calling attention to the collective brain rot his administration was sure to cause.  We documented the lies, the BS, the tortured reasoning, the gaslighting and the outright absurdity of many Trumpist claims. And we worried that having such a disinformation machine occupy the White House would pose a grave threat for the future of our democracy.

On January 6, when the U.S. Capitol was stormed by a mob of insurrectionists hellbent on disrupting the electoral process, we got a chilling glimpse of what many of us had predicted. It is not just that 70 percent of Trump supporters don't think the election was free and fair. It is that a significant subset of them thought that the appropriate response was to enter the Capitol by force and violently stop the certification of Joe Biden as the next president of the United States.

These people believed that the best way to defend our democracy was to destroy it. That literally made sense to them.

What this means is that the problem we face is far deeper than a community trapped in its own delusional reality. The problem is not just the culture of lies and deception and bluster and bragging; the problem is the cult itself.

This vocal subset of Trump supporters didn't just swallow falsehoods; they were brainwashed. Moreover, they weren't just confused about the facts. The core concern is not just disinformation; it is the violent response to it. So, if we are going to recover from the Trump years we will have to recognize that we need to do more than stop the lies. We also have to stop the actions and behaviors that have been justified by these lies. His diehard supporters will require collective deprogramming.

The Cult of Trump

Over the last four years various commentators have flagged Trumpism as a cult. Former White House director of communications Anthony Scaramucci, of all people, called attention to the idea that his supporters were part of a cult. In June 2018, Senate Foreign Relations Chairman Bob Corker (R-TN) suggested that Republicans were in a "cult-like situation" with Trump because most refused to even consider disagreeing with him.

To make matters even more disturbing, when Donald Trump Jr. was asked on Fox & Friends about Corker's claims, he replied "You know what? If it's a cult, it's because they like what my father's doing."

The reason why it matters to think about Trumpism as a cult is because it allows us to consider that the problem is not simply a consequence of falsehoods consumed via right-wing media. Yes, the culture of disinformation was severe, but those listening to the falsehoods did much more than fall for a bunch of BS. They blindly adored their leader, refusing to question any of his actions, and then they were prepared to use violence to protect him, even if, in the case of the Capitol marauders, it meant risking their own lives.

Yet, as Benjamin E. Zeller points out, describing Trumpism as a cult misses a few critical distinctions and may not be an effective strategy to counteract the negative effects of Trumpian ideology. There are a few reasons for this, he argues, including the fact that Trump supporters are not a fringe minority as most cult members tend to be. In fact, they come close to representing half of the voting electorate. But, perhaps, most importantly, Zeller argues that focusing too much on brainwashing absolves those holding false beliefs from being responsible for themselves. Brainwashing conjures up victimhood and turns the brainwashed into innocents.

Will a cult pushed to the extreme fracture?

That's what leads to the silver lining of the terrifying and disturbing attacks of January 6 on the Capitol. The good news is that they were so bad.

Certain rioters planned and schemed and deliberately and coldly sought to overthrow the government. They were not just caught up in a frenzied swoon caused by Trump's incendiary speech that day. They were not innocent victims of brainwashing, though they were clearly delusional.  They were openly and unabashedly attempting to perpetrate an insurrection. The images of them attacking a Capitol police office with a U.S. flag, for example, are too disturbing for most Trump supporters to justify. The awful truth of it, it turns out, could prompt an encouraging step forward.

Sure, the rioter who was shot and killed by Capitol Police is now being martyred as an innocent victim. Sure, there are rumors circulating that the attackers were actually Antifa. Sure, there are those who try to insist that Trump wasn't to blame. But as the truth comes out, thanks to the fact that most of the rioters had a compulsive need to document their every move on social media, it becomes harder and harder for those Trump supporters who are not part of the fringe extreme to ignore the horror of the attacks.

The chilling reports that the rioters may have been given tours of the building in advance by Republican representatives, that they had guns and bombs, that they intended to abduct and harm Vice President Mike Pence and members of Congress, and that they spent weeks preparing to storm the Capitol combine to offer such a grotesque picture of the insurrection that few can stomach it. The promising news is that the type of "patriotism" on display in the attack was so obscene that it is serving as a wake-up call for many of those aligned with Trump ideology.

Consider it this way: Trump's call for carnage was so grotesque that it may well have broken his spell.

In fact, a recent PBS New Hour/Marist poll shows that 80 percent of Republicans oppose or strongly oppose the actions of the Trump supporters who broke into the U.S. Capitol to disrupt the process of certifying the presidential election. While a disturbing 18 percent of Trump supporters still back the rioters, it is the 80 percent in opposition that offers a glimmer of hope, because it shows a stark division among the mass of Trump supporters, a crack in the cult, that offers the possibility that Trump's ideological grasp on his "base" may no longer be complete.

We have seen defections from the Republican elite in the form of Mitch McConnell's condemnation of Trump and the fact that ten Republican members of the House voted to impeach. But if we look at the general public, we see that the percentage of the population that voted for Trump, yet condemns the attacks, is far higher than what we are witnessing in Congress.

On one of the few lawns that has a Trump sign in my neighborhood, the name "Pence" has been cut out. When I first saw it, I wondered why someone would deface the sign that way only to quickly realize that the Trump household itself had cut out "Pence" from their very own sign. It struck me to see an act that was so openly childish and silly and also so deeply anti-democratic and aggressive. The worse it is, the better it gets.

And it made me hopeful to think that it may well be exactly through these sorts of absurd, cult-like actions that others might start to question their allegiance to Trumpism. What if the excessively delusional dogma of Trumpism might actually be its own undoing?