It's unclear what connections these National Guard members had, but officials say there was no plot against Biden 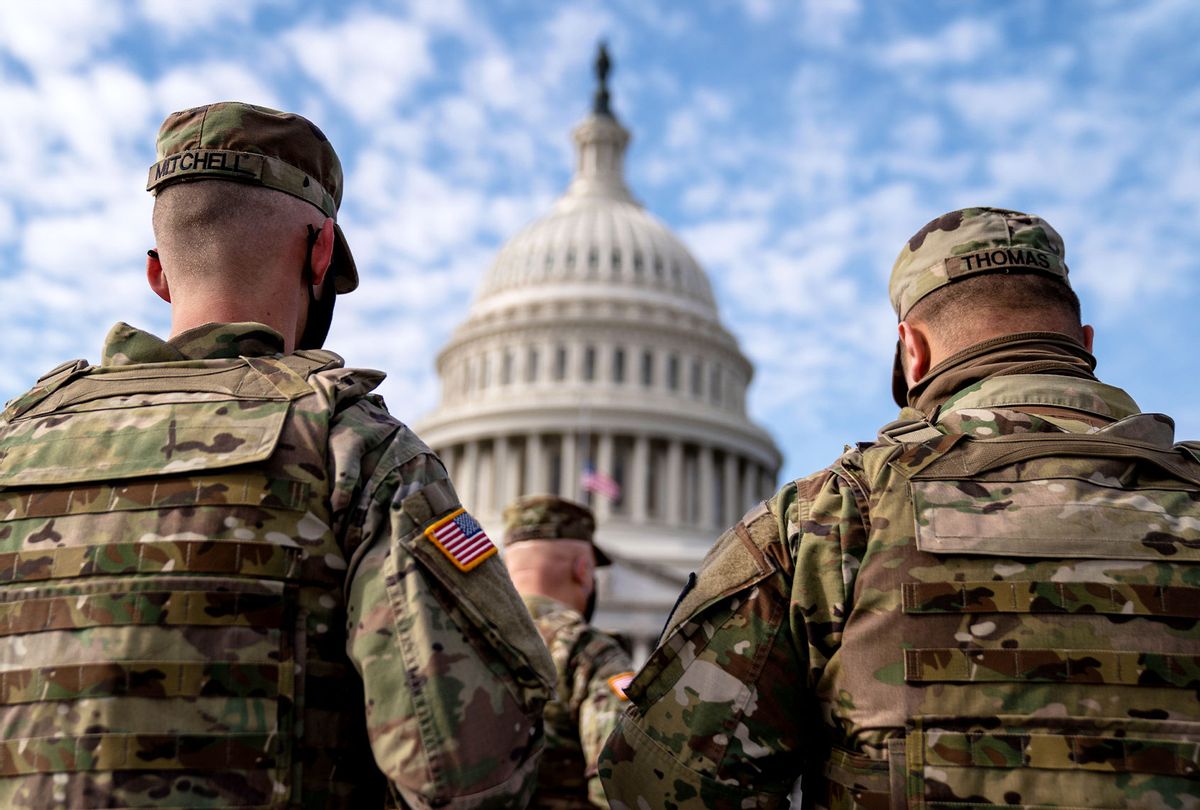 Two members of the National Guard were removed from the mission to provide security for President-elect Joe Biden's inauguration after they were discovered to have ties to "fringe right" militias, according to the Associated Press.

An Army official and a U.S. intelligence official told the AP they did not find a plot against Biden himself but that as a precaution, the two members were removed from the massive security force preparing for Wednesday's ceremony. They did not say what group they belonged to. The National Guard and Secret Service did not comment on the report.

The report came after the AP reported on Sunday that the FBI was vetting all 25,000 National Guard members deployed to Washington ahead of the swearing-in over fears of an "insider attack."

"We're continually going through the process, and taking second, third looks at every one of the individuals assigned to this operation," Army Secretary Ryan McCarthy told the outlet, adding that as of Sunday officials had not flagged any major issues.

A day later, acting Defense Secretary Christopher Miller said in a statement that there is "no intelligence indicating an insider threat."

Some Republicans had bristled at the background checks. Texas Gov. Greg Abbott said it was the "most offensive thing he'd ever heard."

"No one should ever question the loyalty or professionalism" of National Guard members, he said on Twitter, adding that he would "never" send his troops to the nation's capital again "if they are disrespected like this."

The two National Guard members were removed amid growing scrutiny that militias or far-right extremists could try to attack the inauguration after the deadly Jan. 6 siege on the Capitol. Federal prosecutors on Tuesday unsealed documents revealing that Edward Caldwell, the suspected leader of the far-right Oath Keepers militia, has been charged with conspiracy and other charges stemming from his alleged role in the riot.

The FBI said in an unsealed affidavit that members with Oath Keeper gear were seen in videos from the riot moving in an "organized and practiced fashion and forc[ing] their way to the front of the crowd gathered around a door to the U.S. Capitol." The FBI said Caldwell later boasted about "storming the castle" in Facebook messages and urged others to storm state capitols.

The FBI also privately warned law enforcement agencies on Monday that "lone wolves" and QAnon followers have discussed posing as National Guard members in Washington to potentially "disrupt" Biden's inauguration, according to an intelligence report obtained by The Washington Post. The FBI also said some people had shared maps of sensitive locations in the nation's capital, though it did not specify any plots against the swearing-in ceremony.

"QAnon members have discussed posing as National Guard soldiers, believing that it would be easy for them to infiltrate secure areas," the report said.

The FBI report noted that some QAnon adherents may have access to military uniforms through prior military service or surplus stores. Numerous current and former military members have been charged in the wake of the Jan. 6 riot. The FBI also noted that some National Guardsmen have noticed an uptick in surveillance of security preparations ahead of the event.

An AP review found that at least 22 current or former members of the military or law enforcement agencies have been identified as being at or near the riot, while more than a dozen others are still under investigation.

Ashli Babbitt, the woman killed by Capitol Police when she tried to breach the House chamber, spent 14 years in the Air Force. A man seen carrying zip-tie handcuffs on the Senate floor during the riot was identified as retired Air Force Lt. Col. Larry Brock Jr., who prosecutors said planned to "take hostages" and "kidnap" members of Congress. Timothy Hale-Cusanelli, an Army reservist and naval contractor accused of being a white supremacist and Nazi sympathizer. was also charged with federal offenses related to his alleged role in the riot. Prosecutors said he had "secret" security clearance that gave him access to a "variety of munitions."

A senior defense official told CNN that extremist groups have long focused on recruiting current and former military members and seeking to infiltrate their own members into the armed forces.

"We know that some groups attempt to actively recruit our personnel into their cause, or actually encourage their members to join the military for purposes of acquiring skills and experience," the official said. "We recognize those skills are prized by some of these groups not only for the capability it offers them, but it also brings legitimacy to them in their mind for their cause."

McCarthy told the AP that the FBI has been vetting Guard troops deploying to D.C. since last week as thousands more have continued to flow in from states across the country.

"The question is, is that all of them? Are there others?" he said. "We need to be conscious of it and we need to put all of the mechanisms in place to thoroughly vet these men and women who would support any operations like this."