"The very people assigned to protect the city ... could present a threat to the incoming president" 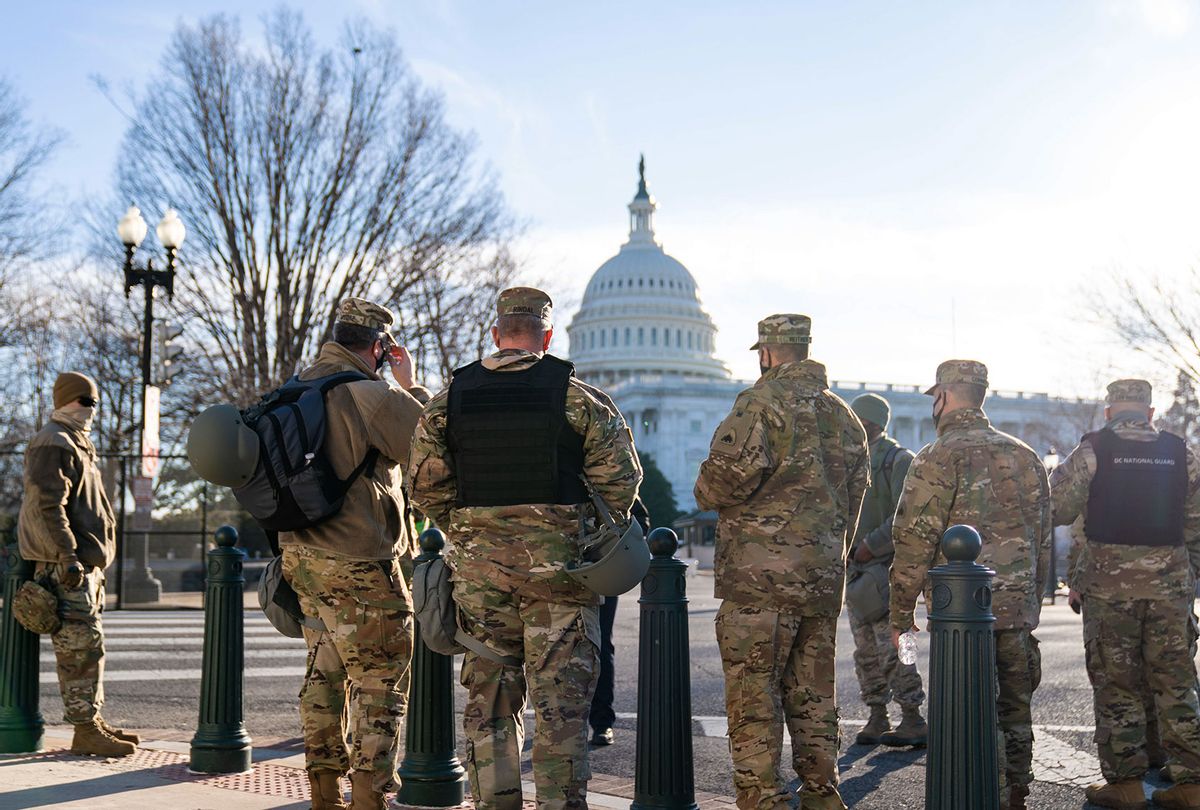 Members of the National Guard stand across the street near the Senate office buildings with the U.S. Captiol in the background as heightened security measures are put in place around the U.S. Capitol Building a day after a pro-Trump mob broke into the nations capitol while Congress voted to certify the 2020 Election Results on Thursday, Jan. 7, 2021 in Washington, DC. (Kent Nishimura / Los Angeles Times via Getty Images)
--

Federal authorities are heavily vetting the tens of thousands of National Guard troops that are heading to Washington from around the nation to help secure President-elect Joe Biden's inauguration ceremony. This additional screening has reportedly been prompted by fears of a possible "insider attack" on the event by right-wing extremists among the soldiers' ranks.

The Associated Press reported Sunday that all 25,000 National Guard members deployed to D.C. are undergoing FBI vetting that involves "running peoples' names through databases and watchlists maintained by the bureau to see if anything alarming comes up." The FBI screening, which has reportedly not yet turned up evidence of a plot, is being conducted on top of routine vetting carried out by the U.S. military.

"The massive undertaking reflects the extraordinary security concerns that have gripped Washington following the deadly Jan. 6 insurrection at the U.S. Capitol by pro-Trump rioters," AP noted. "And it underscores fears that some of the very people assigned to protect the city over the next several days could present a threat to the incoming president and other VIPs in attendance."

Concerns of an attack by National Guard members come in addition to growing fears of violence by outside right-wing extremist groups emboldened by President Trump's incessant lies about the 2020 election and the Jan. 6 assault on the U.S. Capitol Building, which left five people dead. Trump — who, along with Republican lawmakers, incited the attack — has said he will not attend Biden's inauguration and reportedly plans to leave Washington for Florida on the morning of the event.

The presence of white nationalists and other right-wing extremists within the ranks of the U.S. armed forces has long alarmed observers. As HuffPost's Christopher Mathias tweeted in response to the FBI's heightened security vetting, "In 2019, I wrote a series of stories exposing a dozen U.S. servicemen as members of the white nationalist group Identity Evropa."

"Among them were two National Guardsmen ... both of whom, after being exposed as fascists, were allowed to stay in the National Guard," Mathias wrote.

Citing Army Secretary Ryan McCarthy, the AP reported Sunday that "service members from across the military" attended the Jan. 6 pro-Trump rally near the White House that precipitated the deadly invasion of the Capitol building.

"It's not clear how many were there or who may have participated in the breach at the Capitol," AP reported. "So far only a couple of current active-duty or National Guard members have been arrested in connection with the Capitol assault."