Who is Victoria Nuland? A really bad idea as a key player in Biden's foreign policy team

A Cold War true believer who sabotaged Obama's foreign policy, Nuland is a huge risk at the State Department 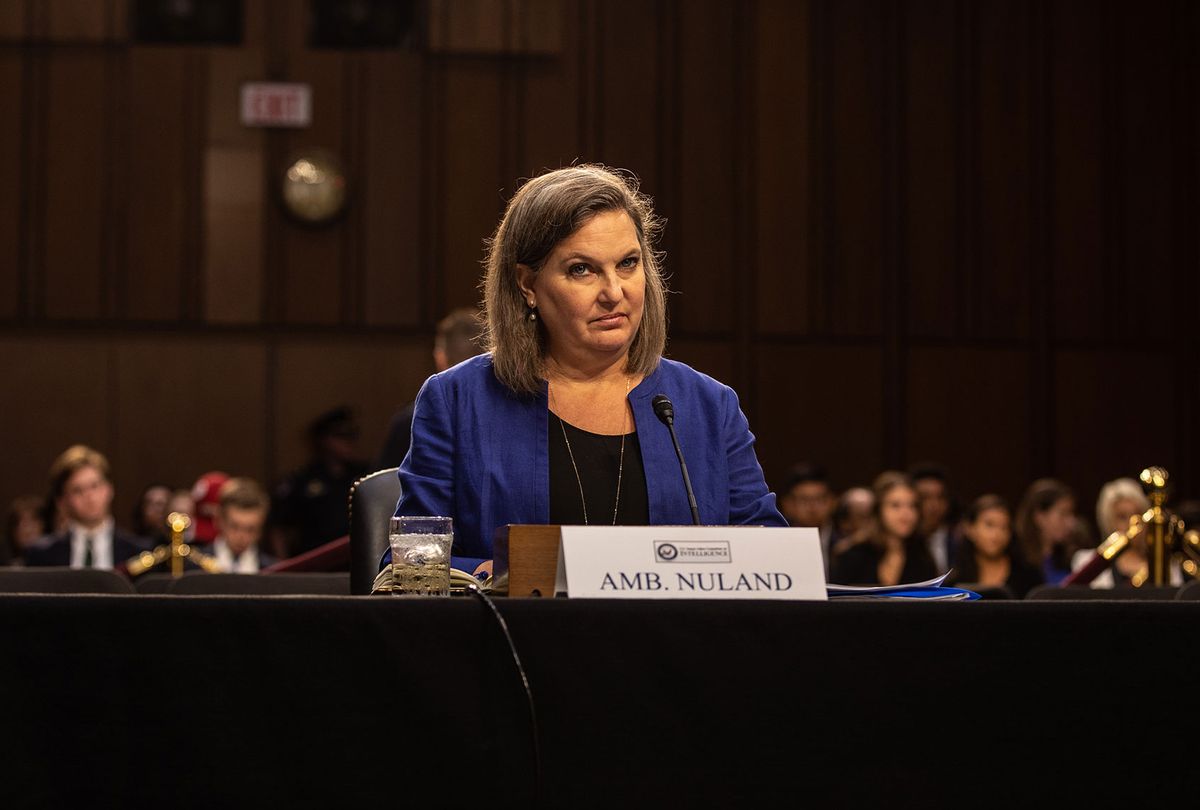 Former US Assistant Secretary of State for European and Eurasian Affairs Victoria Nuland testifies during a hearing on Policy Response to Russian Interference in the 2016 US Elections before the Senate Intelligence Committee at Capitol Hill in Washington, USA on June 20, 2018. (Yasin Ozturk/Anadolu Agency/Getty Images)
--

Who is Victoria Nuland? Most Americans have never heard of her, because the U.S. corporate media's foreign policy coverage is a wasteland. Most Americans have no idea that President-elect Biden's pick for deputy secretary of state for political affairs is stuck in the quicksand of 1950s U.S.-Russia Cold War politics and dreams of continued NATO expansion, an arms race on steroids and further encirclement of Russia.

Nor do they know that from 2003 to 2005, during the hostile U.S. military occupation of Iraq, Nuland was a foreign policy advisor to Dick Cheney, the Darth Vader of the Bush administration.

You can bet, however, that the people of Ukraine have heard of neocon Nuland. Many have even heard the leaked four-minute audio of her saying "Fuck the EU" during a February 2014 phone call with the U.S. ambassador to Ukraine, Geoffrey Pyatt.

During the infamous call on which Nuland and Pyatt appeared to be plotting to replace or undermine elected Ukrainian President Victor Yanukovych, Nuland expressed her not-so-diplomatic disgust with the European Union for favoring former heavyweight boxer and austerity champ Vitali Klitschko to take over as prime minister, instead of the U.S. first choice, Artseniy Yatsenyuk, who indeed took power after Yanukovych was ousted about three weeks later.

The "Fuck the EU" call went viral, as an embarrassed State Department, never denying the call's authenticity, blamed the Russians for tapping the phone, much as the NSA has tapped the phones of European allies.

Despite outrage from German Chancellor Angela Merkel, no one fired Nuland, but her potty mouth upstaged the more serious story: the U.S. plot to overthrow Ukraine's elected government — and America's responsibility for a civil war that has killed at least 13,000 people and left Ukraine the poorest country in Europe.

In the process, Nuland, her husband Robert Kagan — co-founder of The Project for a New American Century — and their neocon cronies succeeded in sending U.S.-Russian relations into a dangerous downward spiral from which they have yet to recover.

Nuland accomplished this from a relatively junior position as assistant secretary of state for European and Eurasian affairs. How much more trouble could she stir up as the No. 3 official at Biden's State Department? We'll find out soon enough, if the Senate confirms her nomination.

Joe Biden should have learned from Barack Obama's mistakes that appointments like this matter. In his first term, Obama allowed his hawkish Secretary of State Hillary Clinton, Republican Secretary of Defense Robert Gates, and military and CIA leaders held over from the Bush administration to ensure that endless war trumped his message of hope and change.

Obama, the Nobel Peace Prize winner, ended up presiding over indefinite detentions without charges or trials at Guantánamo Bay, an escalation of drone strikes that killed innocent civilians, a deepening of the U.S. occupation of Afghanistan, a self-reinforcing cycle of terrorism and counterterrorism, and disastrous new wars in Libya and Syria.

With Clinton out and new personnel in top spots in his second term, Obama began to take charge of his own foreign policy. He started working directly with Russia's President Vladimir Putin to resolve crises in Syria and other hotspots. Putin helped avert an escalation of the war in Syria in September 2013 by negotiating the removal and destruction of Syria's chemical weapons stockpiles, and helped Obama negotiate an interim agreement with Iran that led to the JCPOA nuclear deal.

But the neocons were apoplectic that they failed to convince Obama to order a massive bombing campaign and escalate his covert proxy war in Syria and at the receding prospect of a war with Iran. Fearing their control of U.S. foreign policy was slipping, the neocons launched a campaign to brand Obama as "weak" on foreign policy and remind him of their power.

With editorial help from Nuland, Kagan penned a 2014 New Republic article entitled "Superpowers Don't Get to Retire," proclaiming that "there is no democratic superpower waiting in the wings to save the world if this democratic superpower falters." Kagan called for an even more aggressive foreign policy to exorcise American fears of a multipolar world it can no longer dominate.

Obama invited Kagan to a private lunch at the White House, and the neocons' muscle-flexing pressured him to scale back his diplomacy with Russia, even as he quietly pushed ahead on Iran.

When Ukrainian President Yanukovych spurned a U.S.-backed trade agreement with the European Union in favor of a $15 billion bailout from Russia, the State Department threw a tantrum.

The EU trade agreement was to open Ukraine's economy to European imports, but without a reciprocal opening of EU markets to Ukraine, it was a lopsided deal Yanukovich could not accept. The deal was approved by the post-coup government, and has only added to Ukraine's economic woes.

The muscle for Nuland's $5 billion coup was Oleh Tyahnybok's neo-Nazi Svoboda Party and the shadowy new Right Sector militia. During her leaked phone call, Nuland referred to Tyahnybok as one of the "big three" opposition leaders on the outside who could help the U.S.-backed Prime Minister Yatsenyuk on the inside. This is the same Tyanhnybok who once delivered a speech applauding Ukrainians for fighting Jews and "other scum" during World War II.

After protests in Kyiv's Maidan Square turned into battles with police in February 2014, Yanukovych and the Western-backed opposition signed an agreement brokered by France, Germany and Poland to form a national unity government and hold new elections by the end of the year.

But that was not good enough for the neo-Nazis and extreme right-wing forces the U.S. had helped to unleash. A violent mob led by the Right Sector militia marched on and invaded the parliament building, a scene no longer difficult for Americans to imagine. Yanukovych and his members of parliament fled for their lives.

Facing the loss of its most vital strategic naval base at Sevastopol in Crimea, Russia accepted the overwhelming result (a 97% majority, with an 83% turnout) of a referendum in which Crimea voted to leave Ukraine and rejoin Russia, of which it had been a part from 1783 to 1954.

The majority Russian-speaking provinces of Donetsk and Luhansk in eastern Ukraine unilaterally declared independence from Ukraine, triggering a bloody civil war between U.S.-backed and Russian-backed forces that still rages in 2021.

U.S.-Russian relations have never recovered, even as the two nations' nuclear arsenals still pose the greatest single threat to our existence. Whatever Americans believe about the civil war in Ukraine and allegations of Russian interference in the 2016 U.S. presidential election, we must not allow the neocons and the military-industrial complex they serve to deter Biden from conducting vital diplomacy with Russia to steer us off a suicidal path toward nuclear war.

Nuland and the neocons, however, remain committed to an ever-more debilitating and dangerous Cold War with Russia and China to justify a militarist foreign policy and record Pentagon budgets. In a July 2020 Foreign Affairs article entitled "Pinning Down Putin," Nuland absurdly claimed that Russia presents a greater threat to "the liberal world" than the Soviet Union posed during the old Cold War.

Nuland's narrative rests on an utterly mythical and ahistorical narrative of Russian aggression and U.S. good intentions. She pretends that Russia's military budget, which is one-tenth of America's, is evidence of "Russian confrontation and militarization" and calls on the U.S. and its allies to counter Russia by "maintaining robust defense budgets, continuing to modernize U.S. and allied nuclear weapons systems, and deploying new conventional missiles and missile defenses to protect against Russia's new weapons systems."

Nuland also wants to confront Russia with an aggressive NATO. Since her days as U.S. ambassador to NATO during President George W. Bush's second term, she has been a supporter of NATO's expansion all the way up to Russia's border. She calls for "permanent bases along NATO's eastern border." We have pored over a map of Europe, but we can't find a country called NATO with any borders at all. Nuland sees Russia's commitment to defending itself after successive 20th-century Western invasions as an intolerable obstacle to NATO's expansionist ambitions.

Nuland's militaristic worldview represents exactly the folly the U.S. has been pursuing since the 1990s under the influence of the neocons and "liberal interventionists," which has resulted in a systematic underinvestment in the American people while escalating tensions with Russia, China, Iran and other countries.

As Obama learned too late, the wrong person in the wrong place at the wrong time can, with a shove in the wrong direction, unleash years of intractable violence, chaos and international discord. Victoria Nuland would be a ticking time-bomb in Biden's State Department, waiting to sabotage his better angels much as she undermined Obama's second-term diplomacy.