A beloved Syrian dessert and the inheritance of loss

How serendipity, food memory and family brought a forgotten recipe to life 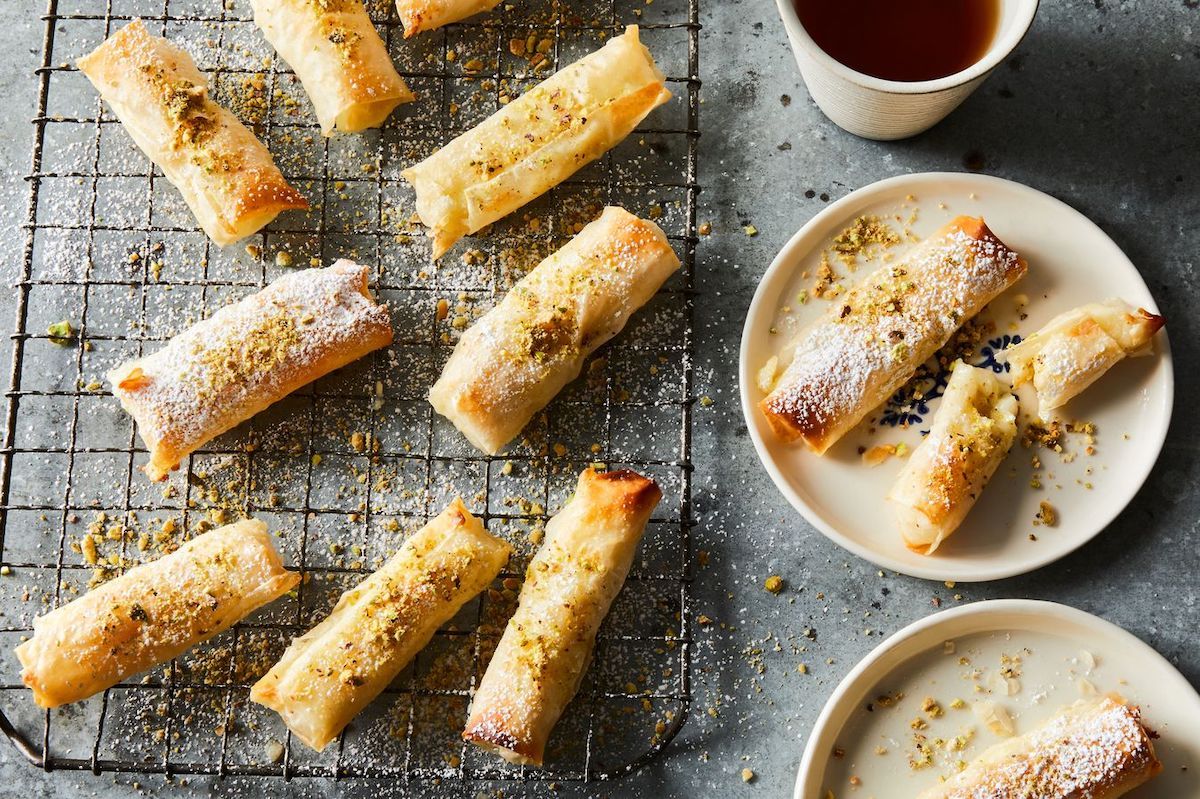 Back in early February, before the world as we knew it changed, I hosted 20 people at my home in Chicago. Crowding around a dining table packed to the edges with my favorite Syrian Jewish dishes, we ate and talked about the Syrian war. It was a benefit luncheon I was hosting to raise money for displaced people of the nearly 10-year old conflict that has, for most of its duration, been a blip on the map of global crises.

Aided by the mezze spread of my dreams — musabaha, muhammara, marinated feta and olives, and cheese sambousak — my friends circles merged and mingled together. When the conversation finally turned to Syria, we were deep into lunch. Over mujaddara and spinach fatayer, we began to peel away at the layers of the conflict, using stories of courage and resilience to access an alternative history. As I shuffled lunch plates from the dining room back to the kitchen, I felt a sense of pride. Guests were rapt with attention and asking thoughtful questions, and there were murmurings of satisfaction around the room: everyone was enjoying the food. I slid the baking sheets into the oven and began washing and drying salad plates. It was time for dessert.

A couple of weeks before the luncheon, I was still searching for the perfect dessert idea. Kanafeh, my first choice, and a childhood favorite of mine, felt too fussy, and wasn't the finger-friendly finish I was looking for. So, I called my mom and brought up my interest in making qatayef, a well-loved Arab pastry. It would be a showstopper of a dessert, but I was looking for her vote of confidence. As I listed out the logistical hurdles I would have to overcome to serve these cream-filled deep-fried pancakes for 20 people, I could see I wasn't going to get the validation I was seeking. What I hadn't realized was that I'd trigger another decades-old food memory.

There has to be a word that describes when a long-dormant memory, buried in the dark recesses of one's brain, comes rushing to the front, but this is exactly what happened with my mother. Though her recollection was immediate and matter-of-fact, there was something serendipitous about it. In my mom's deep mental catalogue of everything she had ever cooked, it felt as if she had been waiting for the moment to find this treasure in the corner.

Phyllo with sutlaj had last been made, my mom explained, some 20 years ago by my grandmother on Shavuot, a Jewish holiday on which it is traditional to eat foods with dairy. As she reminisced, I tried to recall my 13-year-old self eating this dessert, a creamy, floral-scented custard enveloped in buttery phyllo dough, but had little memory of it. My mom urged me to make it, and I was quite taken with the idea — an old recipe rediscovered, an impressive end to the luncheon, and an opportunity to pay homage to my grandma, who passed in 2011.

The only snag? She didn't have the recipe.

As I dwelled on whether the recipe would live again, I began thinking about the patterns of loss and reemergence in recipe preservation. Several years before my grandmother died, she had stopped cooking, but well before that, the women in my family — aunts and cousins alike — began learning to cook and bake as she did. After all, she was getting on in years and the family was ever-expanding, so they pitched in to put together elaborate Shabbat and holiday dinners. It was a casual inheritance that developed over a few years. No one was prepared for her to completely leave the kitchen — but one day, she turned the light switch off one last time.

My grandmother was gone by the time I loved food and cooking enough to pursue it professionally. People often ask me about the inspiration for my catering business and the Syrian dishes that I cook. I invariably talk about the influence my grandma had on me, and the legacy she built in the kitchen. But here's the thing: legacy is tricky, and almost always seen through the eyes of the beholder. Did my grandmother love cooking? I do not know, and I do my best not to conflate the unbelievable command she had in the kitchen with a love for the time she spent there. One of her quips in her final years was: "I've seen the world over!" Usually this was her feisty response to someone pushing her too hard to take on some new experience. It only dawned on me after she was gone what this had really meant. She was tired.

I was young when my mom started telling me about my grandma's life growing up. Though her family's Aleppian lineage runs long, my grandmother was born in 1922 in what is now Istanbul. Right after she was born, her father's jewelry business took the family to Paris. At the age of 17, the year France surrendered to the German army, she was compelled to leave her parents behind and hide on a farm until the country was liberated from Nazi occupation in 1944. When she returned to Paris, it was a completely changed city, country, and life. Her family's house had been ransacked and was empty. She had lost her father, mother, and twin brother to concentration camps.

It was not until I was much older that I learned why my grandma survived. When the Germans came to her family's home one night and took her twin brother, her parents set in motion a plan to send their daughters away from Paris, paying thousands of dollars to secure their escape, forging papers to hide their Jewish family name (Chalom), and arranging safe passage to the small town of Villeneuve in Southeastern France.

Adele, or Auntie Adele as we call her, was only 12 when she fled with my grandma and her other sisters. Though my grandma never actually mentioned this, the experience of war and violence left an indelible mark on her relationship with Auntie Adele. After all, she helped raise her. While her other sisters stayed in Europe to make new lives, Auntie Adele moved to New York soon after the war was over. My grandmother would follow her several years later, settling there with my grandfather in 1951.

It was because of grandma's closeness to Auntie Adele, both in physical proximity and relationally, that I saw her so often growing up. She was a fixture at childhood summer beach outings and was often around on holidays. After my grandmother died, it was Auntie Adele we called to decipher recipes and recall the Syrian dishes that grandma left in our memories but not on index cards. As it turns out, Auntie Adele could not remember the last time she had made phyllo with sutlaj, but she gave my mom her recipe and asked, jokingly, to save her some.

When I started my own catering business three years ago, I began making a concerted effort to document and become more skilled in making many of my favorite Syrian dishes. It was not only to begin sharing this wonderful food more widely with clients, but also in realization that my forebears would not be around forever.

Since moving to Chicago in 2010, I have traveled back to New Jersey to visit family every summer. The past three visits, I have suggested the idea of having an intergenerational family cooking class with Auntie Adele to learn more about Syrian dishes we have never made but the idea has never come to fruition. At the end of my last trip, I asked my mom why she has been so reluctant to let this happen. Her response was that she thought it would be an imposition. But imposition is how recipes and culinary tradition live on for another generation, I wondered to myself—like money, we cannot take them to our grave and be the better for it.

When I brought the phyllo with sutlaj out to the table this past February, I could not help but think of my grandma and Auntie Adele. In so many ways, their experiences with loss, trauma, and hope touch up against the feelings Syrians are cycling through today. When Auntie Adele — the last living sibling of my grandma — is no longer with us, will memories, recipes and stories continue to reveal themselves? They have left so much behind and yet, selfishly, I still want more.

As people settled into dessert and smiles hit their face, I let out a sigh of relief. I looked around the table and realized that, 800 miles from any of my own family, I was surrounded by my chosen family who supported my idea, my food, and an amazing organization. We had raised over $2,000 to support Syrians still striving for peace and justice. With the themes of loss and emergence floating around all of us, a dessert had finally returned home.