Dear Mr. President: You inspired us — but "unity" with Republicans and Trumpists is a trap

Joe Biden's inaugural address was soaring, Lincoln-esque oratory — but his vision of national unity is dangerous 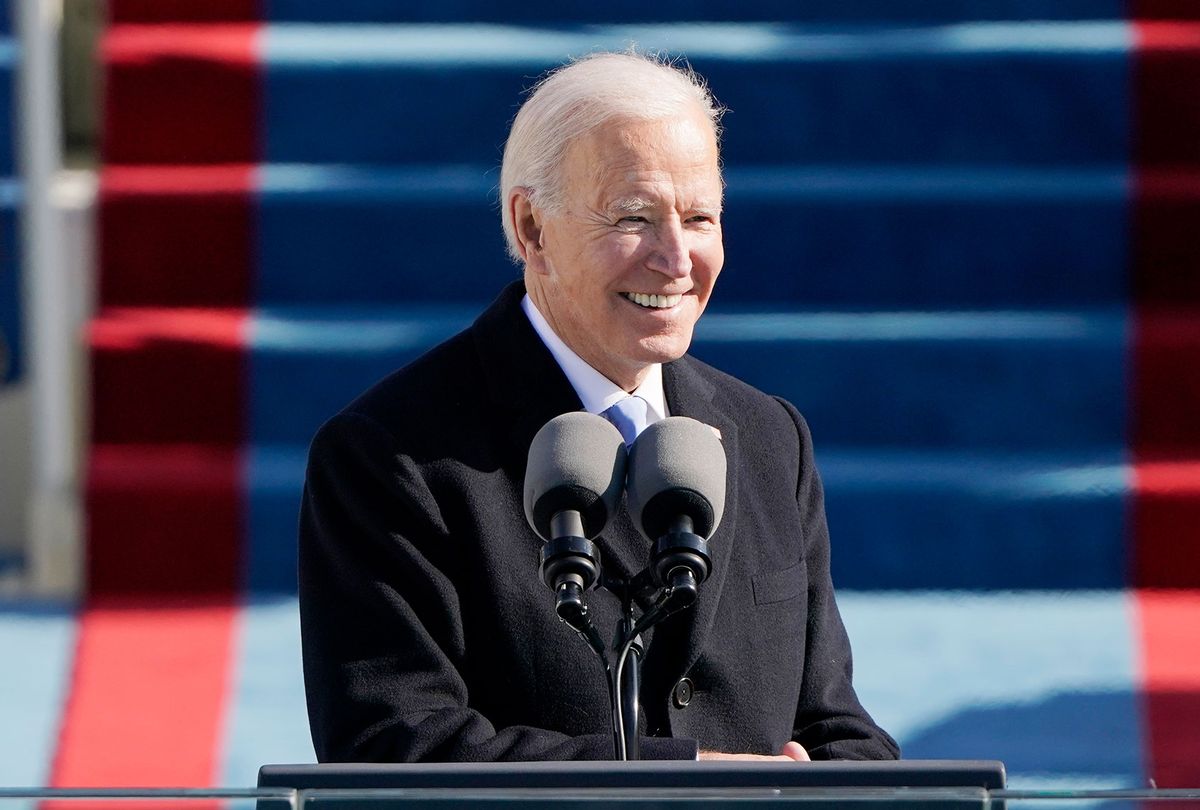 Donald Trump — now the former president of the United States — was and is many things. An authoritarian and fascist and a demagogue. An abusive parent or spouse, on a societal scale, who delights in tormenting the American people. A destroyer. A person who encourages the worst of human behavior. Pathological. An apparent sociopath or psychopath. Evil, corrupt and enraptured with violence. A white supremacist. The worst president in American history. A traitor.

The American people held their breath in fear and anticipation of the horrible things that would — and did — come to pass in the final days of Trump's regime. When Joe Biden became president of the United States at 12 noon on Wednesday, they could finally let out a sigh of relief.

While many in the news media have celebrated Joe Biden's election, and now presidency, as averting or reversing catastrophe, that is not in fact true. Donald Trump inflicted numerous catastrophes on the United States: ramped-up authoritarianism, fascism and overt white supremacy; a coup attempt; a lethal plague; collective post-traumatic disorder; economic ruin.

Here's a more apt description of what Biden's presidency means for the country: If Donald Trump had won a second term, American democracy would have suffered an extinction-level event. Such is the enormous challenge facing the new administration.

Biden's inauguration speech showed that he may in fact be more than a transitional president whose job is to tend a broken democracy, government and country by doing the bare minimum, and leaving it all somewhat better than he found it.

Considering the challenges the United States faces from its many self-inflicted wounds, a "return to normal" may actually be an accomplishment in itself.

Biden's inauguration speech was Lincoln-esque. It was a kind of sermon reflecting on American democracy in the aftermath of the coup attempt by Trump's supporters — a democracy that needs to be healed, renewed and energized. Biden deftly took Trump's "Make America Great Again" and rejected the ugly energy and intent of that language while reworking it into something aspirational, inspirational and inclusive. Jazz is one of America's gifts to the world. In that moment and others during his inauguration speech, Joe Biden was improvising, playing around the melody.

Biden's notes were the challenges and opportunities of American history and life; a country with the capacity to regain its greatness but now lost and uncertain; a political community that is broken, but whose people have more in common than what divides them; the urge to create a new and better country while escaping the pull of those anchors from the worst parts of its past, weights that now threaten to drown us all.

On Twitter, political consultant and author David Rothkopf (whom I interviewed in November) offered an excellent summation of Biden's inaugural address as "the delicate balancing act of elevating, inspiring, calling for unity, & saying the era of Donald Trump is over. For every high ideal, there was a counterpoint to Trump. It was a beautifully balanced, positive speech, full of truth, well-delivered."

Whatever one may think of Biden as a politician, he has shown himself to be a decent and honorable man. As the successor to a president who had no such qualities, Biden's humanity is one of his greatest strengths. This is especially true for a country and a people who are mired in death and loss, not just literally in the form of lives lost and ruined, but also in that Trumpism has rendered the United States almost into an undead country, unsure and lost, whose stories and myths about its own greatness and inherent goodness have been exposed as lies.

But Biden's humanity and fundamental decency and generosity of spirit could also prove to be his greatest weakness.

The central theme of the president's inaugural address was unity: He wants to reunite the tens of millions of Trump's political cult members with the rest of normal society.

To accomplish this goal, Biden is asking good Americans — those who believe in democracy — to reach out to Trump's followers and other Republicans, a group of people who have repeatedly shown that they reject multiracial democracy and embrace authoritarianism and fascism.

In essence, Biden is asking his voters and other supporters to do the emotional, moral and physical labor of reaching out to the worst elements of America, those who have exiled themselves into the alternate reality of TrumpWorld and the broader right-wing echo chamber. Biden's approach rewards bad behavior and does not force a new maturity or wisdom onto Trumpists, Republicans and other unrepentant elements of the right. Ultimately, such an approach all but ensures that the White Right will become even more radical and dangerous.

In a new essay for the Daily Beast, Rothkopf put that threat in its historical context:

But there is a much bigger issue at play here. This is not just about Trump's upcoming Senate [impeachment] trial. Unless leaders from both parties work to make defending democracy a joint priority then we soon again will be at risk. Indeed, if we falter, history suggests we will be following in the footsteps of other democracies that dismissed or minimized threats and soon succumbed to dictators. Not adequately responding to the threats of would-be authoritarians because those behind them seem unworthy, disorganized, or ignorant — or because it is politically hard or uncomfortable — is a dangerous error. Hitler's Beer Hall putsch of 1923 was a failure too. It was mocked. Ten years later Hitler took power, and the result was the worst calamity in the history of the world.

Moreover, public opinion polls and other research show that a majority of Republicans do not believe that Biden legitimately won the 2020 election. Almost 50 percent of registered Republicans supported the Trump-inspired attack on the Capitol. Many Republicans also believe that Donald Trump is innocent, despite the obvious evidence that he incited insurrection and violence. Other research shows that Trump's followers, Republicans, and other members of the right are more likely to be authoritarians who reject basic democratic norms. Trump voters are especially hostile to multiracial democracy and prefer to live in an authoritarian society if that will ensure that white people are the dominant and most powerful group.

Experts on terrorism have warned us that Donald Trump's coup attack, like his entire presidency, will inspire more right-wing extremism and political violence, specifically targeting the Biden administration and the Democrats.

In a recent article for Yahoo News, retired Gen. Stanley McChrystal, one of the world's leading experts on counter-insurgency warfare and the former commander of U.S. forces in Iraq and Afghanistan, issued this warning:

So even if Trump exits the scene, the radical movement he helped create has its own momentum and cohesion now, and they may find they don't need Trump anymore. They can just wait for another charismatic leader to appear. So the fabric of something very dangerous has been woven, and it's further along than most Americans care to admit.

In Anne Applebaum's new essay for The Atlantic, "Coexistence Is the Only Option," she offers a similar warning about a post-Trump America:

We could also see more violence. Since the election, the Bridging Divides Initiative, a group that tracks and counters political violence in the U.S., has observed a singularly ominous metric: a sharp uptick in the number of protests outside the homes of politicians and public figures, including city- and county-level officials, many featuring "armed and unlawful paramilitary actors." In Idaho, aggressive protesters shut down a public-health meeting; in Northern California, numerous public-health officials have resigned in the face of threats from anti-maskers. Death threats are already shaping U.S. politics at a higher level too. We may never know how many more Republicans in Congress might have voted for Trump's impeachment last week had it not been for the ominous messages they were receiving online.

Applebaum continues: "Outside politics, outside the law, outside the norms — the seditionists have in fact declared their independence from the rest of us. January 6 was indeed their 1776: They declared that they want to live in a different America from the one the rest of us inhabit, ruled over by a different president chosen according to a different rule book. And yet they cannot be wished away, or sent away, or somehow locked up. They will not leave of their own accord, and Americans who accept Biden's lawful victory won't either. We have no choice except to coexist."

President Biden has extended the hand of friendship and unity to Trump's followers and other Republicans, and is asking his supporters and other Americans of conscience to do the same thing. Predictably, those overtures are being rejected. A new Pew Research poll shows that Republican voters want their leaders to obstruct the Democratic Party's policies.

Almost on cue, the Republican National Committee sent out this email on Inauguration Day:

Today begins a new chapter in our Country.

While the Left promises to implement their Big Government Socialist Agenda, the Republican Party will need to come together and work even harder if we're going to continue putting America FIRST.

The Democrats have control of the White House, the Senate, and the House, and our Party will be relying on you now more than ever. YOU are going to play a vital role in our efforts to preserve all of our historic accomplishments over the last four years, and it's critical that we have your support.

We need your help to send a STRONG message to the Left that Patriots, like YOU, stand with the Republican Party 100%.

Donald Trump's name may not have been on that email, but its message — and its overtures to stochastic terrorism — were couched in his terms: Republicans are "real Americans" and true "patriots"; Democrats are the Other, an enemy to be vanquished.

Joe Biden has declared himself a president for all Americans. In practice, however, that may be impossible. Instead, Biden needs to realize, sooner rather than later, that he must be the best president possible while refusing to surrender to the demands of a Republican Party and right-wing public that views him (and his voters) as illegitimate and un-American. To compromise with such people is not a path to national healing. It is a path to the betrayal of American democracy that will only serve to undermine our new president's ability to lead the country back to reality, sanity, health and perhaps even greatness.