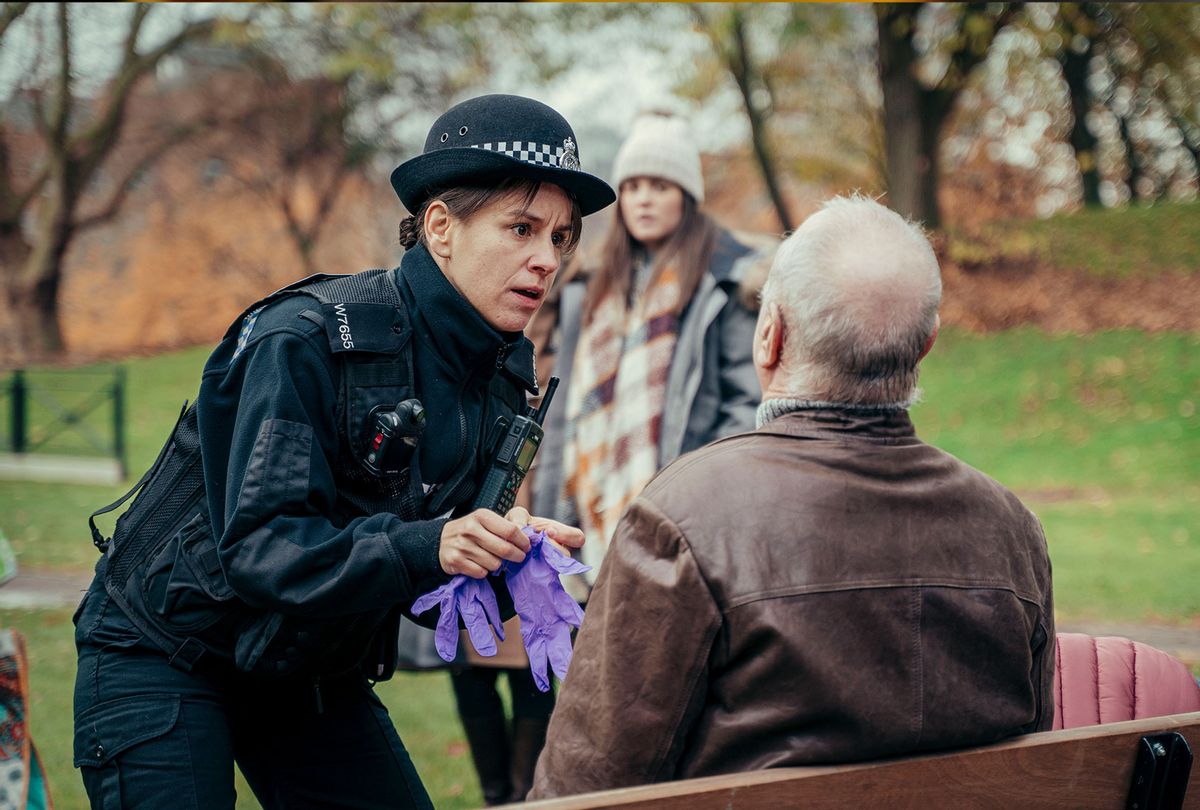 "The Salisbury Poisonings" scene in which Charlie Rowley presents his partner Dawn Sturgess with a bottle of perfume is devastatingly tender. Johnny Harris and MyAnna Buring, the actors playing the couple, emphasize the ordinary sweetness of this romantic exchange between two people who by this point in the AMC series we know to be troubled. He's a recovering drug addict, and she has own issues with irresponsibility and past alcohol abuse that are straining her relationship with her parents.

Harris and Buring channel the exhaustion draining Charlie and Dawn through their bodies, making the audience feel the weight of their struggle.  But in this moment all that we see is Dawn constructing a brave front starting with smoothing a bright color across her lips.

Charlie watches with the look of a man aware he's the reason Dawn's family shuns her, and in a gesture filled with love and apology he offers her this small token, a surprise gift.

She accepts it with a smile, sprays the liquid on her wrists and remarks how strange it is that it doesn't seem to smell like anything. He bows toward her extended forearm and inhales deeply, not realizing that he has poisoned himself and the woman he loves.

Presumably those watching "The Salisbury Poisonings" know what happened to the real Sturgess and Rowley. In 2018 they became two of the most prominent examples of the collateral damage that rippled outward from strange case of former Russian intelligence officer Sergei Skripal and his daughter Yulia, who were found collapsed and convulsing on a park bench.

The Skripals' story drew sustained international attention once Sergei's status as a double agent working for British intelligence became public along with the cause of their sudden illness – traces of a highly potent nerve agent known as Novichok. Their poisoning proved how bold Vladimir Putin's regime had become, proving it had zero compunction about striking out at its enemies even in foreign countries.

But in "The Salisbury Poisonings" the Skripals are small players in this crisis that writers Adam Patterson and Declan Lawn design to highlight the toll such events play on the people typically overlooked by international news coverage.

This also makes the four-part series a thoughtful examination of vulnerability and the heroism of so-called ordinary citizens stepping up when the unthinkable lands at their threshold, personified by Tracy Daszkiewicz, played in the series by Anne-Marie Duff. When Novichok turned up in Salisbury, Daszkiewicz was the head of Wiltshire Council Public Health at the time and mainly responsible for monitoring hygiene at restaurants and school kitchens.

Local law enforcement turn to her when the Skripals' poisoning initially looks like a matter of public health, and it is due to her quick and thorough reaction to the nerve agent's discovery that the poisoning's effects weren't more widespread. Once officials figure out the agent was placed on the Skripals' doorknob and absorbed through the skin they anxiously race to retrace the steps of where they might have gone and which other places they may have touched on during their daytime walk through town.

The answer is frightening, leading to much of the city being shut down for an extended period of time, causing an uproar among locals upset to be losing business. But what could they do? The enemy is invisible and unthinkably lethal. Half a teaspoon of the stuff has the potential to kill tens of thousands. Trace contact is all it takes to fell a grown man, as we see through the eyes of DS Nick Bailey (Rafe Spall), the investigating officer who visits the Skripals' home and begins exhibiting symptoms of poisoning shortly thereafter.

When watching "The Salisbury Poisonings," directed by Saul Dibb, it may be tempting on the part of some viewers to search for parallels to other fact-based disaster series such as 2019's "Chernobyl," HBO's multiple award-winning limited series look at the 1986 nuclear accident in the Soviet Union and the disastrous response and cover-up that followed.

This is understandable considering the shared threads of a Russia connection and crisis. From there each story's purpose and tone sharply diverge, in that "Chernobyl" is a story about a corrupt government's hubris and effort to cover up its mistakes and the price paid by its citizens and the people tasked with containing the radioactive fallout.

Dibb and the writers craft "The Salisbury Poisonings" as a tighter human drama, I think, in that it takes us inside of the lives of the people most impacted by the event, those of Tracy, Nick, Dawn and Charlie. As public servants directly involved in the case Duff's and Spall's characters receive more extensive screen time and expansion in the first two episodes while Dawn and Charlie's plot flits around the edges.

They also live in Amesbury – a town outside of Salisbury, just far enough away from the event for it to be a story happening to someone else. Because of this, people who don't know this story or the role this struggling couple eventually play in it may wonder why so much time is being invested in their story – until we get the answer, which is that they don't deserve what eventually happens to them.

The Salisbury incident was handled swiftly and is one of the rare cases of a national government allowing capable local agency personnel to do the jobs they were already capably executing. With this as the story's driving thesis, "The Salisbury Poisonings" becomes much more of a showcase of how one supposedly targeted act of terror can grind down an entire community's patience and a person's trust in themselves.

The gnawing stress that Duff exudes in her performance combines passion with a wearying concern as Tracy wrestles with the real life cost of what can happen if she fails in any part of her job. Her teen son and husband cannot comprehend the pressure she's under and gripe at her absence in their lives.

Then again, they're part of a larger mob of locals who can't conceive of how close they came to being sickened or killed by foreign assassins attempting to snuff out two people without any consideration for anyone else. The enemy cannot be seen and hasn't affected many people, certainly not anyone they know.

Viewers have gotten to know these people intimately, and even before this we witness how easily this invisible death can proliferate when Nick returns home after work and the camera focuses on what he touches as he enters his home: light switches, the refrigerator door, the faucet handle for the kitchen sink, the kettle.

Everyone does these thing during our daily lives without thinking about it, actions we take for granted even our new era of carefully washing our hands and sanitizing surfaces.

By the end of the series we may not be thinking about ourselves and whether this can happen to us as much as we may be grateful for dedicated servants like Daszkiewicz, one of the many real people featured in a sequence at the end of the series, and perhaps mourn for the family of Dawn Burgess, shown in happier times in mobile phone video. They are dancing, happy and unaware that a foreign power would reach out upend their lives. Why would they fear such a thing? They're just normal people living in a small town.