Fueled by tips from family and friends, FBI ramps up arrests of Capitol rioters 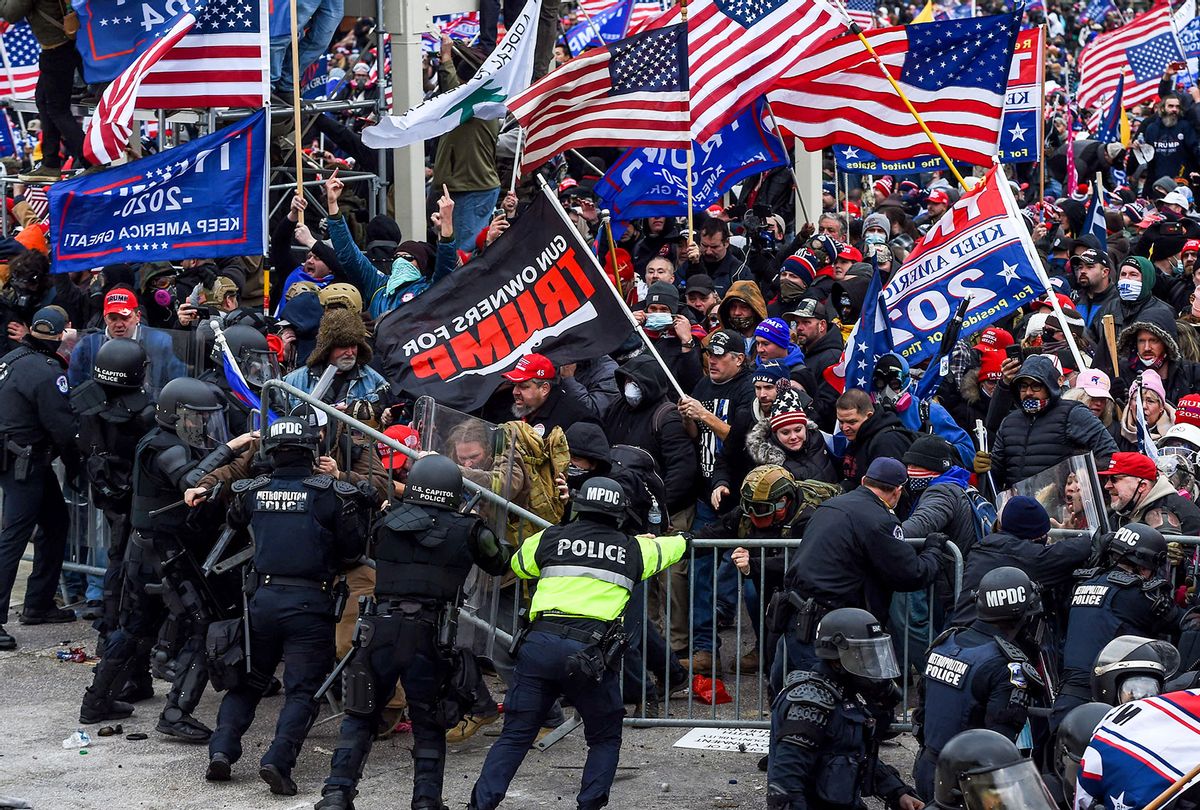 The FBI is showing no signs of slowing down in its pursuit of those involved in the Capitol riot earlier this month. From lawmakers to militia members to right-wing activists, those recently arrested run the gamut, but many have ties to both law enforcement and the military.

Last week, the FBI reported that it has received over 200,000 digital tips from the public, many of which have been provided by friends, family, relatives, and coworkers of those involved. More than 200 cases have been opened and over 100 people have been apprehended in connection with the riot.

"The American people have demonstrated that they will not allow mob violence to go unanswered," said Acting Attorney General Jeffrey A. Rosen in a statement.

On Monday, Brandon Straka, a right-wing activist who spoke at the "Stop the Steal" rally was arrested in Nebraska for impeding a police officer and disorderly conduct. He made national headlines last June after refusing to wear a mask on an American Airlines flight, citing an unspecified medical condition, after which he was permanently banned from the airline. Straka is the founder of the "#WalkAway" campaign which encouraged those on the left to "walk away" from the "divisive tenets endorsed...by the Democratic Party." CNN's David A. Love called the campaign "a psychological operation" that was "connected to Kremlin-linked Russian bots" attempting to overstate the popularity of the moment.

Two Virginia police officers Thomas Robertson and Jacob Fracker were also identified as rioters who breached the U.S. Capitol. After Robertson and Fracker told The Roanoke Times that they were ushered in by Capitol police and that their involvement was purely "a joke," the FBI later found that Robertson and Fracker evaded the police and had intent to harm members of Congress. According to an affidavit, Robertson told a friend that seeing Senators "cowering on the floor with genuine fear on their faces is the most American thing I've ever seen in my life." Fracker reportedly bragged to friends on social media that he had urinated on Nancy Pelosi's desk. Both officers are currently on unpaid leave.

In Texas, Jackson Reffitt, 18, the son of Capital rioter Guy Reffitt, revealed his own father's involvement in the unrest to the FBI. According to Jackson, his father threatened him well in advance of the insurrection. "If you turn me in, you're a traitor," Guy told his son, "And you know what happens to traitors. Traitors get shot." Jackson nonetheless turned his father in, outing Guy as a member of the Three Percenters, a far-right militia group with a history of violence. In 2017, a Three Percenter was unsuccessfully attempted to detonate a car bomb in Oklahoma City. According to Jackson's affidavit, Guy brought a pistol with him to D.C.

A small-town Ohio bar owner and veteran, Jessica Watkins, was accused of conspiring in the Capitol insurrection, along with her co-conspirators Donovan Crowl, a former Marine, and Thomas Caldwell, who served in the Navy. According to Watkins' boyfriend with whom she owns the Jolly Roger bar in Woodstock, Watkins was "not a violent person...She can be very spirited, but she is a very good person at heart and she just really wants to try to help people." Watkins is a member of the Oathkeepers, a far-right anti-government militia group that threatened to declare "civil war" if former Secretary of State Hillary Clinton was elected in 2016. Following the riot, Jessica Watkins told the Ohio Capital Journal, "To me, it was the most beautiful thing I ever saw until we started hearing glass smash. That's when we knew things had gotten really bad."

Former marine Michael Foy, who was caught on tape striking an officer ten times with a hockey stick, was arrested on January 21st. Foy received an honorable discharge from the military in 2019 and was given a "good conduct medal" after securing the rank of corporal. Foy's public defender Colleen Fitzharris argued that her client is suicidal and is struggling with mental health issues. "He didn't go to D.C. to cause violence," said Fitzharris, who alleges that Foy got caught up in "mob mentality." Foy was charged with four felonies and faces twenty years in prison, and was denied bond behind ahead of his hearing.

On January 8th, federal prosecutors arrested a Trump supporter by the name of John Lolos, who was repeatedly yelling "Trump 2020" on a Delta flight that turned around due to the disturbance. After being kicked off the flight, Lolos was identified by a Metropolitan Washington Airports Authority police officer. The officer had miraculously recognized Lolo after scrolling through his Instagram feed and seeing Lolo in the Capitol riot. "During the video Lolos can be seen exiting the U.S. Capitol doorway, wearing the same shirt he was wearing (at) the airport," said the airport police officer. He "was waving a red 'Trump 2020 Keep American Great' flag hooked together with the United States flag, yelling 'we did it, yeah!'"

The FBI also apprehended the man who tweeted "Assassinate AOC" just before joining in on the violent storming of the Capitol. Garret Miller, 34, who posted the tweet in response to AOC's call for Trump's impeachment, explained over Facebook that "[he] just wanted to impeach himself a little bit lol. Garrett Miller later received five criminal charges following the insurrection after local law enforcement tipped off the FBI, making Miller's wish come true.