The Dyatlov Pass incident, one of the most famous missing hiker mysteries, may have just been solved

In 1959, nine Russian hikers unexpectedly went missing. Scientists finally have a compelling theory as to why 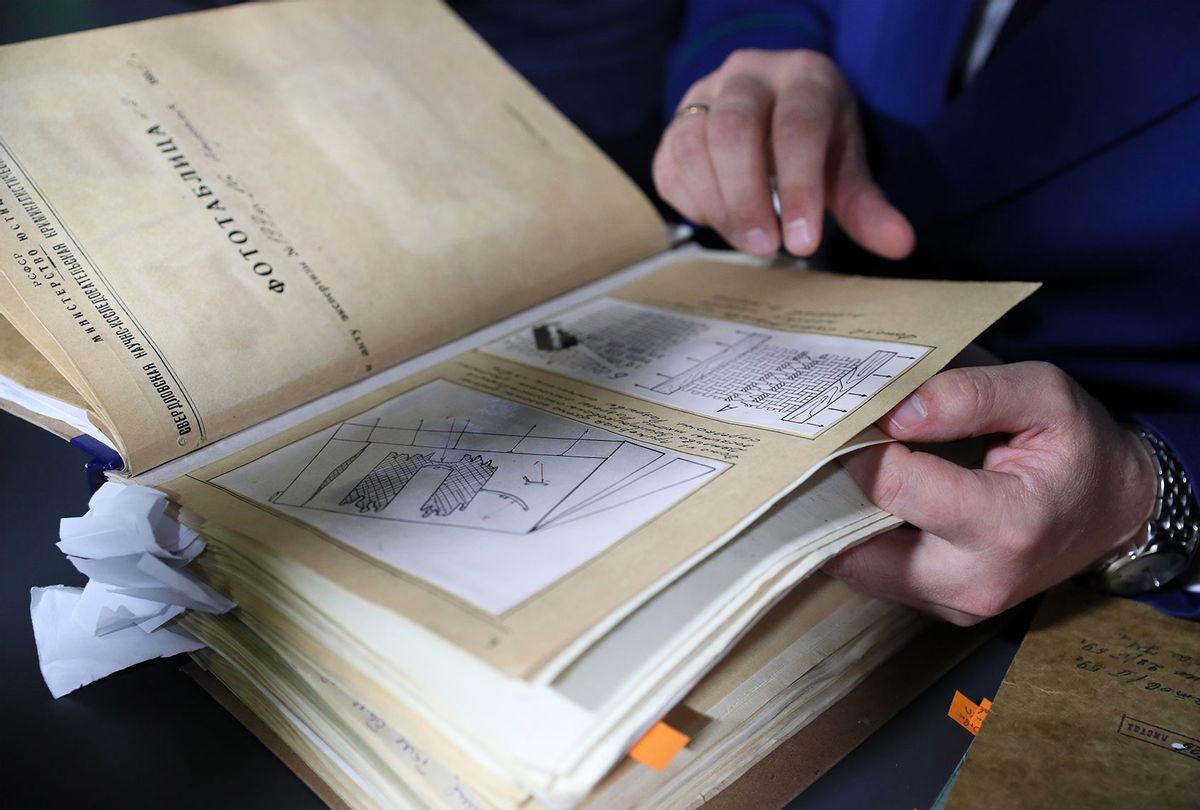 Files seen during a press conference on the investigation of the Dyatlov Pass Incident case that has recently been reopened. Between February 1 and 2, 1959, a group of nine skiers led by Igor Dyatlov died under unclear circumstances in the Northern Urals. (Donat Sorokin\TASS via Getty Images)
--

The Dyatlov Pass incident is one of the great unsolved mysteries of the twentieth century, so inexplicable that it has provided fodder for conspiracy theorists over the past fifty years. The story goes like this: Nine Russian hikers, all students from the prestigious Ural State Technical University, went missing in the northern Ural Mountains between Feb. 1 and Feb. 2, 1959. For unknown reasons, the group cut their way out of their tent in the middle of the night and fled into the wilderness, despite not being properly dressed for the subzero temperatures. Some of their bodies had bizarre injuries: four had severe skull or thorax injuries, two had eyes missing, and one was missing its tongue. When investigators arrived, they determined that most had died from either hypothermia or physical trauma. Yet no one could figure out the chain of events that caused them to flee their campsite or (in some cases) die such grisly deaths.

It sounds like the set up to a horror movie. (Indeed, acclaimed director Renny Harlin made a famous one in 2013, and conspiracy theorists have touted UFOs or even yetis as a possible explanation.) Because the hikers were experienced yet remained in various states of dangerous undress, and because of the odd nature of their injuries, numerous theories emerged, some more out-there than others.

Now, in a new paper published in the journal Communications Earth and Environment, a group of scientists believe they have a theory more viable than any other posed in the past. Despite the seemingly fantastical possibilities behind this horrifying event, the real-life explanation may have been physical, not metaphysical, and involved a highly unusual type of avalanche.

Specifically, the nine students set up camp in an area that they thought was safe from an avalanche, because its slope was less than 30 degrees. 30 degrees is usually considered the threshold for avalanche risk, although flatter slopes can still occasionally experience avalanches. In the case of these nine hikers, the slope was steeper than the hikers must have thought (it was 28 degrees even though it probably appeared to be 23 degrees) and there was a weak layer of underlying snow that made the area susceptible to an avalanche. Although there was no snow fall that night, there were strong winds, which could have moved the snow to the slope above their tent. Because the hikers had set up their sleeping areas on top of their skis, the snow would have hit their tent while they were in an unusually rigid position, thereby explaining their gruesome wounds.

"In the Dyatlov case, the victims were trapped between the falling slab and the tent floor, which was placed on compacted snow reinforced by skis," scientists Johan Gaume and Alexander M. Puzrin write. This would explain the unusual injuries because avalanche victims usually are not pressed against "stiff obstacles" during the incidents in question.

The researchers reached their conclusion by creating avalanche simulation models based on what is known about the conditions surrounding the hikers' deaths.

They are not the first scholars to determine that the hikers died because of an avalanche: The Investigative Committee of the Russian Federation (ICRF) concluded that an avalanche was the culprit in 2019, and their findings were reinforced by the office of the Prosecutor General of the Russian Federation in 2020. This new study has addressed criticisms of that theory, including that there were no obvious signs of an avalanche at the time, the steepness of the tent location, the fact that the avalanche would have occurred after the hikers cut into the slope and the atypical injuries.

As Gaume and Puzrin point out, avalanches have been known to occur in slopes as low as 20 degrees, albeit rarely. A number of factors would have led to the release of a small snow slab directly above the tent rather than a large avalanche, explaining the lack of obvious avalanche signs and the amount of time it took for the event to occur.

The scientists emphasized that this does not mean every facet of the matter has been resolved.

"We do not explain nor address other controversial elements surrounding the investigation such as traces of radioactivity found on the victims' garments, the behavior of the hikers after leaving the tent, locations and states of bodies, etc," the scholars write.