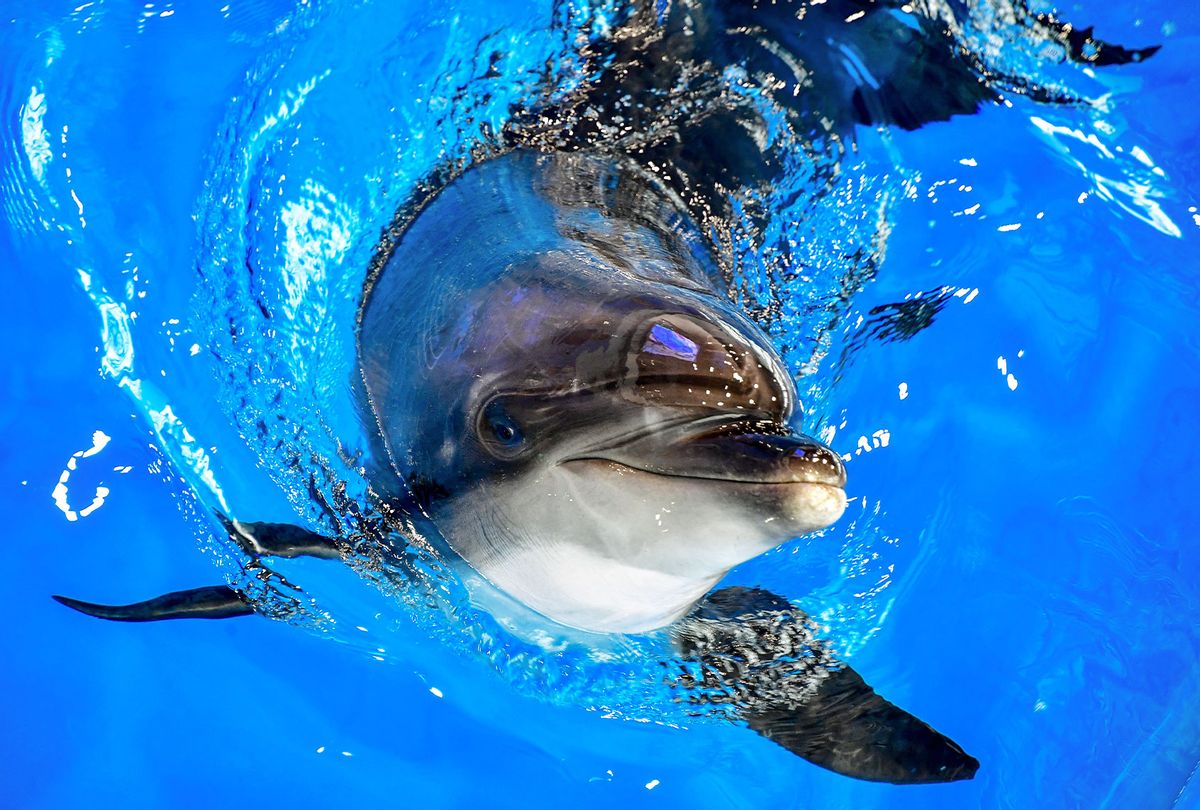 A Black Sea common bottlenose dolphin is seen during an open training session in the dolphinarium at the Okean medical centre. The Okean medical centre has a wide range of health resort facilities, including mud baths, a physiotherapy department, a hydrotherapy department, a seawater pool, a gym, healthy meals, and hotel accommodation. At the beginning of 2021, the dolphinarium started to offer a new service, dolphin therapy, that includes a programme of correction and rehabilitation. (Yuri Smityuk\TASS via Getty Images)
--

It sounds like something out of a Hallmark movie: A child with autism frolics with a dolphin, and suddenly they open up to the world. Cue the inspiring music and roll credits.

It seems like a great premise for a cheesy but uplifting film, but dolphin therapy is very much a real thing, having been touted for years by proponents as a way of treating autism, depression, ADHD, Down Syndrome and a wide range of other psychological or neurological disorders. Yet the evidence overwhelmingly suggests that Dolphin-Assisted Therapy (DAT), as it is known, is bad for the dolphins and useless for the humans. The practice involves the patient interacting with the dolphin by either swimming with it or being pulled around by it or simply by quietly observing it from the side of a pool, touching it or feeding it — and neither party benefits, at least not in the long-term.

Lori Marino of the Whale Sanctuary Project and the Kimmela Center for Animal Advocacy, who co-authored the paper with the late Scott Lilienfeld in the Journal of Clinical Psychology, expounded upon the issues with dolphin-assisted therapy over email. "In many places outside the U.S. the dolphins are captured and taken from their families in the wild," Marino said. "This is a traumatic highly stressful process and dolphins who undergo these captures have a six-fold chance of dying within a few weeks of the capture."

Marino added that the dolphins held in captivity, whether born there or because they were captured from the wild, suffer from having to live in concrete tanks and being forced to perform.

"For DAT in particular, they are forced to allow humans to touch them and, often, ride on them or be towed through the water by them," Marino explained. "This is a coercive practice that infringes on the dolphin's choices and must be reinforced with food in order for the dolphin to even participate. And there is always a risk of disease transmission from dolphin to human but, also, human to dolphin."

As the paper points out, DAT originated with research conducted by Florida International University anthropologist Betsy Smith in 1971, although Smith later disavowed DAT. DAT has also been explicitly denounced by the International Association of Human-Animal Interaction Organizations (IAHAIO). On three occasions over the past 22 years, Marino and Lilienfeld examined research that claimed DAT was successful: First in 1998, then in 2007 and again in their most recent article. As the researchers explained in their paper, part of their motivation was that there were "relatively few peer‐reviewed scientific articles" that studied whether the therapy worked as a treatment for anything.

By 1998 there were enough peer-review papers on dolphin-assisted therapy that they could analyze the methodologies used by several of the ones that claimed DAT could be effective. Then, they found that these studies had a "plethora of serious threats to various types of validity and flawed data analytic methods."

After more studies were published in the ensuing years, they returned to the topic in 2007, and then again reviewed the literature this year.

"Our studies – three in a series – show that there is no scientific evidence supporting the notion that interacting with dolphins has real therapeutic effects for any disorder," Marino told Salon. "Despite the claims and the testimonials, the studies of DAT are too methodologically flawed to support its validity as therapy."

Marino explained that the studies have a number of "serious weaknesses" including "the question of whether dolphins are necessary in the whole practice or whether just any novel enjoyable experience, e.g., being in the water, traveling, attention from other people, is going to produce the very temporary positive mood one sometimes sees in these situations." Marino observed that children benefit from having fun experiences "but that doesn't make it therapy and it doesn't justify charging desperate parents a lot of money under the guise of therapy."

Marino also told Salon that DAT reinforces incorrect assumptions about autism, a condition that is widely misunderstood. (Note: This reporter is on the autism spectrum.)

"DAT can contribute to misconceptions about autism because it suggests, falsely, that the profound problems associated with autism are curable or treatable with a very nonspecific temporary 'feel good' practice," Marino explained. "This vastly underplays the seriousness of autism."

Marino described her late colleague, Scott Lilienfeld, as the epitome of "something that most of us only strive for — an openness to ideas combined with a capacity for critical thinking that gave his work an authenticity and sharpness few have achieved." She noted that he was passionate about debunking pseudoscience, making sure people were not hurt by bad scientific claims and protecting dolphins from mistreatment.