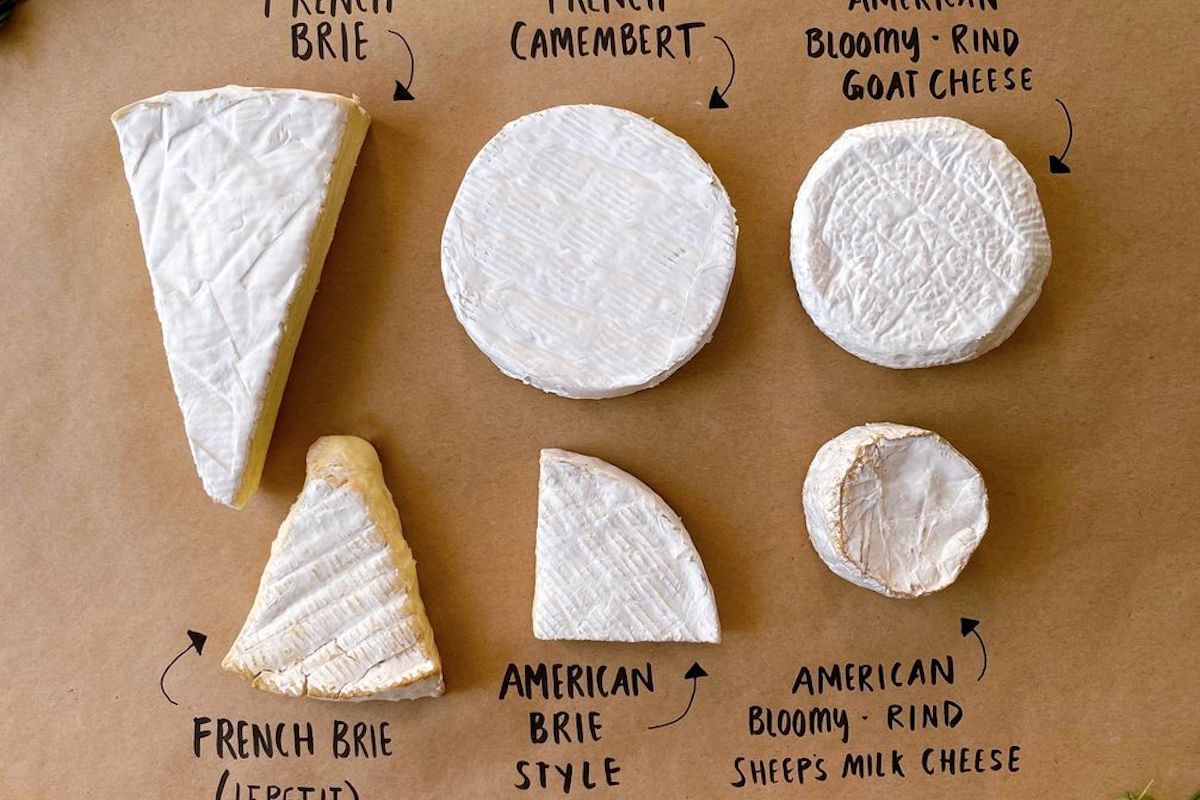 That Cheese Plate is a column by Marissa Mullen — cookbook author, photographer, and Food52's resident cheese plater. With Marissa's expertise all things cheddar, comté, and crudité — plus tips for how to make it all look extra special, using stuff you probably have on hand — we'll be crafting our own cheesy masterpieces without a hitch.

I've been on a bloomy-rind cheese kick this month. First with my a cheese plate in honor of my favorite sandwich, followed by this little number with balsamic-roasted grapes, I can't get enough of these French cow's milk beauties. So naturally, I wanted to take a deep-dive into the origin story behind these plush, fragrant cheeses.

There are two types of Brie that are protected under AOC guidelines in France: Brie de Meaux and Brie de Melun. AOC stands for "Appellation d'Origine Côntrolée," or "controlled label of origin." A cheese can't be called "Brie de Meaux" and "Brie de Melun" if they're not made in these designated regions, following the specific methods from pasture to cow to cheesemaker to affineur (a professional cheese ager).

Same goes for Camembert de Normandie, a small bloomy-rind cow's milk round from the Camembert region of Normandy. Similar to Brie, Camembert has a bloomy rind yet develops a much stronger, earthy flavor. These AOC guidelines ensure that these cheeses are made authenticity, protecting the historical origin of the product.

Here's the catch: The real-deal versions of Brie and Camembert are actually illegal in America because they're made with raw unpasteurized cow's milk. In 1987, the FDA passed a law requiring pasteurization of all milk products, with the requirement of raw-milk cheese to be aged for a minimum of 60 days and clearly marked "unpasteurized." Brie and Camembert are typically only aged for 4 to 5 weeks. As a result, the singular terms "brie" and "camembert" are not protected, causing some confusion in labeling.

After this law was enacted, French cheesemakers began to produce and import pasteurized brie and camembert in different styles from the AOC protected varieties. Some may argue that these cheeses are not considered authentic, but others contest that these imports are as close to accessing the "real thing."

On the domestic front, American cheesemakers have been crafting their own styles of bloomy-rind and brie-style cheeses, yielding a new variety of tasting notes and textures based on their herd and terroir. Cheesemakers have been experimenting with goat milk and sheep's milk, as well as adding additional cream in the cheesemaking process to craft decadent double and triple crème cheeses.

Can these domestic cheeses still be considered "brie"? I asked my friend Christine Clark to weigh in, a Certified Cheese Professional by the American Cheese Society and notable cheese writer.

Marissa Mullen: Why, in American supermarkets, do producers label cheeses "brie" when in fact they are not traditional bries? For example, I've seen "goat brie" and smaller camembert-like rounds labeled "brie" at the store.

Christine Clark: Oh, it's 100% marketing — many people understand what a brie is (or at least think they do), and they're probably more likely to buy that than a wheel of something with a name they've never heard of. It's kind of a bummer because this can confuse consumers, but I understand why producers do it. Part of the problem is that brie has gotten so iconic that it's kind of outgrown its original identity as a 6ish pound wheel of raw milk cheese from Northern France. According to most cheese people, it's not a brie if it's not made in France. But, the lines are blurry. The name "brie" has a ton of history behind it, but it's technically not name-protected on its own. So, something like "goat brie" may not count as a brie for some people, but there's no law saying it's not a brie.

Cheesemongers get upset when consumers call a great American brie-style cheese like Four Fat Fowl "St. Stephen," Sweet Grass "Green Hill," or Cowgirl Creamery "Mt. Tam" a "brie," but it's just because we love those cheeses and think they're special. We don't love them because they're an imitation of something else, we love them in their own right!

Do you foresee a world in which America will have cheeses protected by some AOC style guidelines? Do they already?

Maybe one day we'll have something like that. Right now, we have something called "standards of identity" in the Code of Federal Regulations. But, whereas AOC guidelines are meant to preserve a culinary tradition, the CFR requirements are pretty bare-bones and mostly meant to keep people safe.

AOC guidelines for cheeses stipulate things like where the milk must come from, the breed of cow you have to use (usually, the one that's lived in that area for centuries), what you can and can't feed your animals, how quickly you must use the milk for cheesemaking, and so on. Our guidelines have really none of that. The CFR for cheddar, for instance, stipulates that you can use hydrogen peroxide in your cheesemaking as long as you use something called catalase to eliminate the hydrogen peroxide afterward. Just not even the same universe.

If not brie, what's the proper way for consumers to refer to these cheeses on a cheese plate?

I was taught to call them "bloomy rinds." I like that term, because it invites some education — when the cheese ripens, the cultures sprout like little fuzzy blossoms atop it, and the affineur pats that down into what becomes the rind.

But, I think "brie-style" works just as well, and maybe even better if you don't have the time to explain what a bloomy rind is. The term is simple, accurate, and easy to remember.

After chatting with Christine, I decided to go on an adventure to the market for some brie-style bloomy-rinded cheese taste-testing myself. Although these cheeses may all look similar, they vary greatly in taste and texture. 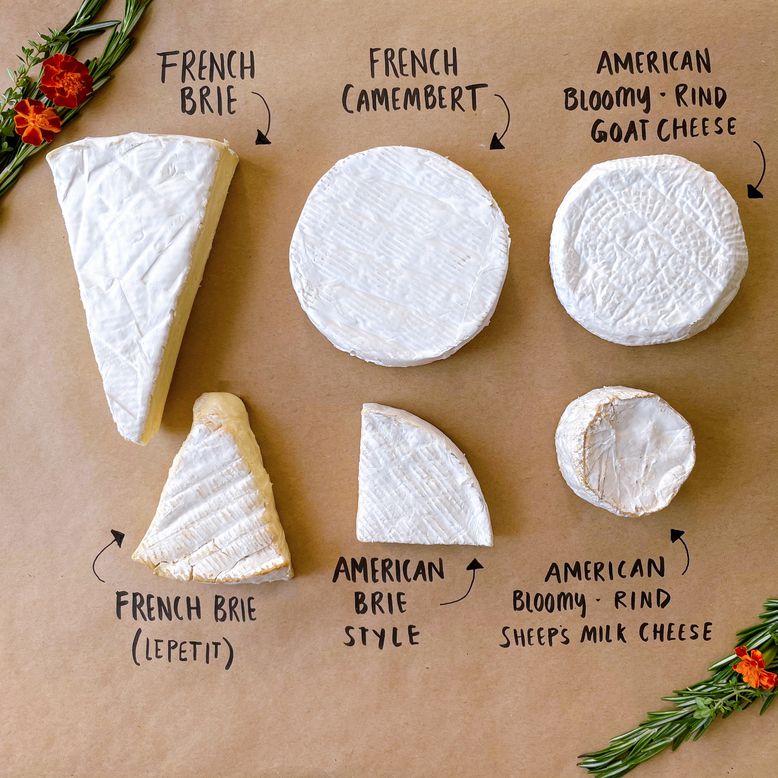 This is the most common Brie sold at American grocery stores. The cheese is imported from French producers and labeled "brie," but is a pasteurized version specifically for American guidelines. Still considered a brie, but not the traditional raw cow's milk type. French brie is typically made in large rounds, between 9 and 14 inches across. The texture is creamy with a mild and buttery flavor.

Imported from French producers with pasteurized milk, camembert is notably made in 5-inch rounds with a more earthy funk encompassing notes of mushrooms and creme fraiche.

The cheese I tried is called "Merry Goat Round" from Firefly Farms in Maryland. A cheese like this could be mistaken for brie at first glance, but it's vastly different in flavor because of the goat milk. This cheese is smooth and slightly tangy when young, developing a complex and earthy flavor with age.

This cheese is called "Simply Sheep Mini" from Nettle Meadow Artisan Cheese in New York. This mini bloomy-rind cheese is made with sheep's milk, resulting in deep flavors of mushrooms, grass and earth.

Here, I tried a cheese called "Moses Sleeper" from Jasper Hill Creamery in Vermont. Although the cheese may be a "brie-style" the cheesemaking technique and terroir of the region gives this cheese it's own original flavor of cauliflower, crème fraîche, and toasted nuts.

Another brie-style imported from France, made from pasteurized milk using traditional methods. This specific cheese is made in a smaller format than the French brie wedge picture above. Bries made of pasteurized milk are generally milder in flavor than Brie de Meaux and Brie de Melun, and this one is no different.

Next time you're at the grocery store, try to experiment with all types of bloomy rind cheeses! If we can't even access the real French Brie in America, try out some domestic artisanal creations and support your local cheesemakers!