Chris Wray would like to claim the FBI has gotten past internal racism. But the problem is subtler than that 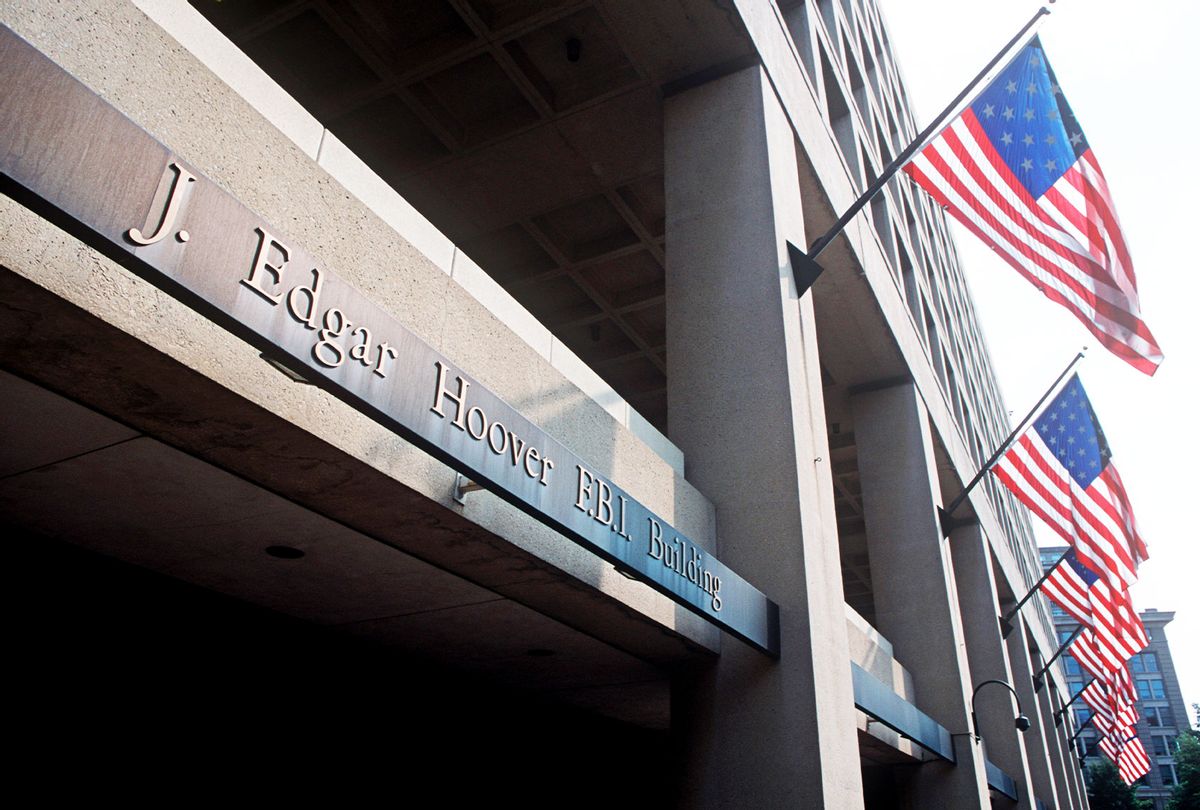 Improving racial diversity at the FBI is not just a question of optics (how the bureau looks) or doing the "right thing" for the sake of inclusivity. There is a clear functional argument in the sense that racial diversity makes the FBI smarter. But that's not something that the FBI has yet admitted publicly. It is time to push them to say it.

So far, the institution has taken the "unique" and "unique perspectives" approach, which is a claim that people of color are recognized for their differences, not an admission that people of color actually make the FBI better and smarter. "Not better, different" is a politically correct construction that can comfortably apply to some situations, but the nuance here is telling.

Diversity is more than just a tedious thing that an organization has to do. There is untapped potential in the way that racial and gender diversity can make the FBI intellectually stronger, on the whole, and not just by including people who are "special" or "different."

The Mirror Project is a group of Black former FBI special agents, and I got in touch with them recently. Last year, they went public with criticism of the FBI's culture, which is far from appreciative and open to professionals of color. Members of he Mirror Project appeared on CBS last year, to make the point that the outward image the FBI is trying to project does not correspond to reality. The photos of racially diverse, happy people, former Black special agents claim, is far from what professionals of color experience on the inside. The group sent a letter to FBI Director Christopher Wray several months ago, urging the bureau's top leadership to take action to improve racial diversity.

With deputy director David Bowdich stepping down soon due to an early retirement, his place will be taken by Paul Abbate, the associate deputy director, who until now was the top guy in charge of HR and personnel. Racial diversity efforts fall under his portfolio. FBI's racial diversity efforts cannot be limited to having black Latino criminals such as Proud Boys leader Enrique Tarrio as an informant on the side. The change in top leadership is an opportunity to put racial diversity front and center.

Racial diversity is a question of recruitment and retention. Good applicants of color could be screened out even at the pre-selection stage — if not due to official policy, then due to subconscious bias. Some of the Mirror Project's former special agents made that point.

Retention is also difficult because agents of color don't feel appreciated or seen by white male colleagues and managers. One former Black special agent said that as a woman of color she felt "invisible" at the FBI. Whether it was a matter of casually ignoring her or downright underestimating her, this treatment was among the reasons why this special agent quit.

Black agents can't be the people used as FBI's public front for "Black issues," or the ones sent to bad neighborhoods. They could as easily be the ones cracking links to terrorism cells in Central Asia or dealing with white-collar fraud and schemes on Wall Street. Similarly, the approach can't be that female agents are needed for "the women stuff."

The fact that racial diversity is lacking at the FBI could also be turned around — for example, criminals wouldn't expect a friendly young black woman to be an undercover FBI agent. There is an element of surprise there, which can be used to the bureau's advantage.

But there is also a much deeper argument for racial diversity that goes to the heart of addressing the intellectual downfalls of "privilege naiveté." That's a term I coined recently to describe the unrealistic notion that the world will give you the same preferential treatment that your own social bubble or parts of society have granted you so far. It's the unrealistic expectation that those who do not belong to your own age, racial, gender or social group will necessarily want to follow you, recognize your needs before their own, and will reorient their agenda according to the privilege you are accustomed to. It's a self-held belief that is bound to break in the real world.

Law enforcement is one of the areas where there is no place for privilege naiveté. Criminals do not care to please you so that you can have things your own way, as entitled law enforcement professionals learn very quickly.

Racial diversity can help rescue the FBI from the many pitfalls of privilege naiveté by offering a check to white groupthink.

If an agent got into an Ivy League school on the hereditary track, there is a decent chance they may develop, consciously or subconsciously, the idea that society owes them success — that a case has to follow you and not the other way around. A person of color who had to beat the odds to make it as an FBI special agent, on the other hand, knows that you have to pedal hard to dynamically master your environment and avoid pitfalls. which the field of resolving crimes is full of. Nothing is easily handed to you, let alone allowing you to rule it, dominate it and bend it. That is the more productive and constructive attitude for someone cracking crimes at the top level.

A person of color or a woman knows that intellect follows a random distribution found across various groups. A law enforcement agent suffering from privilege naiveté assumes that those that do not belong to his group have to know and act as if he is the smarter and more competent, irrespective of the facts on the ground. An agent of color will not make the assumption that a white, middle-aged man owes her that, for example.

One of the side effects of white privilege naiveté is that white male agents could well be unaware of the laws of nature. White male groupthink privilege naiveté prevent groups of FBI agents from seeing clearly the laws that apply in real life, such as "you reap what you sow" or "there is no free lunch." "I set the rules" is how privilege naiveté thinks, which then runs head-on into the tough reality of how law enforcement works.

Privilege naiveté among white, male middle-aged FBI special agents can destroy and ruin a case when an agent tends to think that the narrative has to follow him rather than the other way around: A good agent analyzes and figures out the narrative, instead of fiddling with the narrative however he wants. A false sense of control can create a catastrophe where a case completely falls through.

An agent driven by privilege naiveté may hold the belief that an agent should be able to control those under investigation, and for that matter victims or witnesses. All of them are supposed to recognize him as the lead and the most capable. Anyone who is not male, not white and not middle-aged naturally has to follow him and recognize him as more competent and more knowledgeable. But this is not how real life works. This false sense of importance leads to agents thinking they have a say on major decisions in a survivor's life — occupation, family, children, how  survivor should be portrayed in society and other big decisions. When life doesn't work out that way, the case falls through.

Privilege naiveté – which agents of color are much less likely to suffer from – makes an agent believe that it is not necessaryto master the events and the actors in the case. Instead, the events, actors and circumstances have to please him, centering outcomes according to his preferences, placing his needs and wants ahead of the actual participants' goals — just as society has treated him throughout his life. FBI agents suffering from this false belief think they can cancel, diminish or discredit qualifications and successes by people who do not belong to their social group.

White privilege is counterproductive and completely unrealistic as a lens for the FBI in the 21st century. More agents of color and women could break the harmful psychological group dynamic at play, because they are less likely to hold the idea that others are there to serve them, rather than pursuing their own unrelated goals and agendas. Participants in real life cases, especially criminals, do not care what the FBI wants. White privilege naiveté breeds a false sense of importance that is crushed by real-life practice.

An FBI agent of color who had to earn everything in life, against, the odds tends to appreciate opportunities and knows that nothing can be taken for granted. A person of color would be more appreciative of hard-earned valuable evidence, while an agent suffering from privilege naiveté could be dismissive and disrespectful of evidence channels, confident that it will always keep coming anyway.

Thinking you should have the upper hand, when you don't, is a sign of privilege naiveté. FBI agents of color would not automatically assume that white people are there to serve them, for example. (Whereas the opposite assumption remains far too common.)

Privilege naiveté, on the other hand, is blind to realistic odds, assuming that any case can be bent and recreated in whatever direction the FBI pleases. This kind of thinking has distorted the bureau, and other areas of law enforcement, for far too long.

Simply put, greater racial and gender diversity can improve the FBI's collective brain and make the organization intellectually smarter and better in terms of predictions, case management and outcomes. Faced with a new president and a new era in American politics, FBI leaders like Chris Wray and Paul Abbate must now demonstrate that they get that.