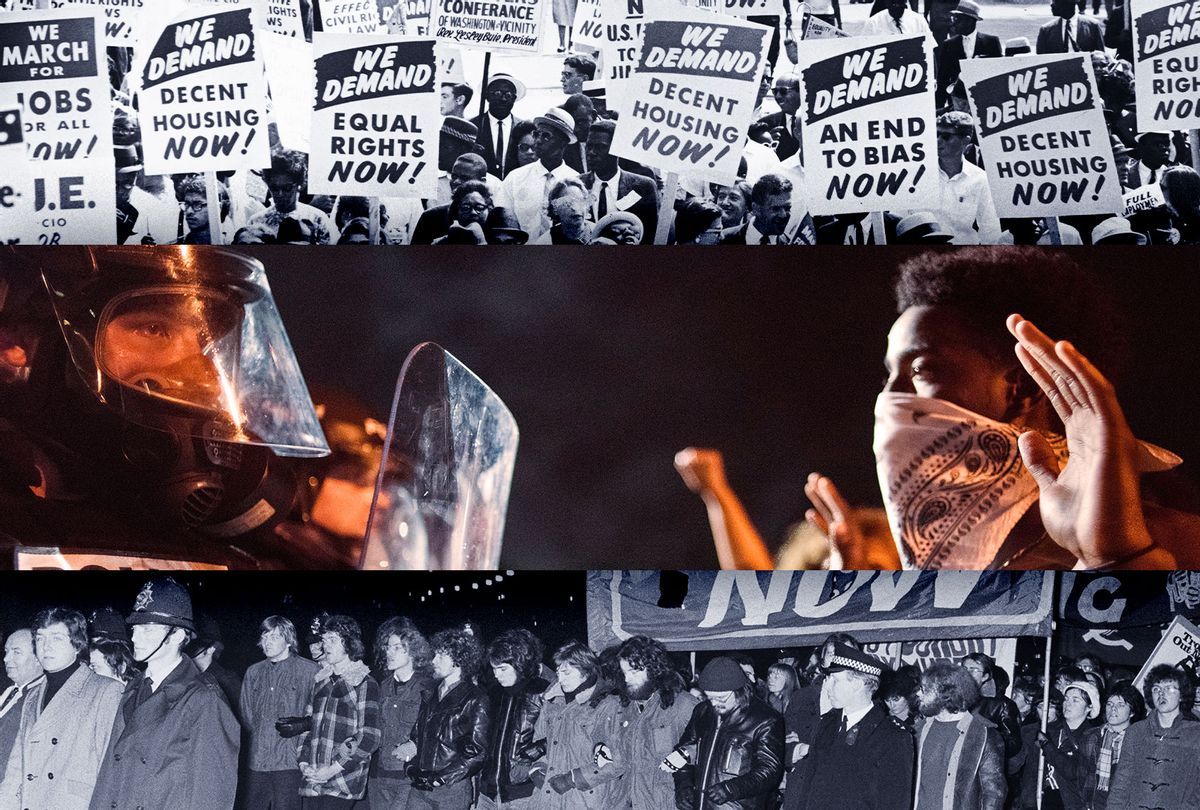 But we don't need a press release to recognize Trump directed white supremacist followers to attack a branch of our national government on Jan. 6. The treasonous assault on Congress capped years of also undermining the judiciary and the executive branch's intelligence, law enforcement and health agencies.

Trump apologists will quarrel with the word directed. Yes, Trump spoke, as he often does, out of four sides of his mouth when he said he would march with the throng to our Capitol. Recordings show people shouting they were invited by the president, and doing his will. It is the message the mob understood that matters as well as video during the siege where Trump expressed love for the insurrectionists.

That Trump will not attend the inauguration of Joe Biden should make you shudder. Without him on the outdoor platform, rebels hellbent on overthrowing our government could assassinate Biden and incoming Vice President Kamala Harris with no risk to messianic and delusional Trump.

This is why police and National Guard will flood that zone on Jan. 20. And it explains why Biden and Harris insist on being sworn in outdoors to signal fear has no place in the land of the free and home of the brave.

And it's not just government buildings that require extra protection from disloyal and self-righteous Americans who love Trump more than our Constitutional liberties. Mosques, synagogues and some churches, especially Black churches, will be vulnerable to attack by those who want to make America white again. Many claim to be Christians but are in fact the embodiment of evil.

Trump's mob will not win this war. No matter what buildings they attack, what leaders they assassinate, they cannot win because there are not enough of them to destroy the United States of America in favor of a dictatorship under Trump, his children or anyone else.

Eager and willing as Trump's army is to assassinate for perceived betrayal outgoing Vice President Mike Pence, as well as Speaker of the House Nancy Pelosi (D-Calif.), Michigan Gov. Gretchen Whitmer, Biden and Harris, our freedom and continuity of our government does not hinge on any individual.

Our nation endures so long as we sustain a broad and deep commitment to the five noble objectives of the Constitution articulated in our Preamble. Each objective is designed to perfect our union over time.

If you don't know the Preamble please click here and read the 52 words again and again until you memorize them. Take note that riches neither are mentioned nor implied. Liberty, the general welfare and justice are, along with their byproducts, peace and tranquility.

Even though the outcome of Trump's Civil War is certain, Trump's band of domestic terrorists can and already have imposed enormous and lasting damage.

These true believers in Trumpian rule can dissuade many from peaceful and joyful mingling in houses of worship, government buildings, sports arenas and political venues. While Biden and Harris are brave, millions will hold back because of their rational fear of violent attack. Doubt that? How eager are you to visit on vacation or ride a bus in Jerusalem? Kabul? Baghdad?

Our nation's capital is an armed camp today. So are the downtowns of many of our state capitals. Law enforcement and the intelligence community sift through plots organized on the Internet in the hope of disrupting attacks before they occur. The police and soldiers are backups for the inevitable failures to prevent attacks.

We also need to recognize we face danger beyond the lawless Trump mob.

We now know the insurgents attacking our Capitol included rogue active-duty military and police officers. Dozens of people on FBI terrorist watch lists were among the attackers, evidently not being watched at all closely. There are disturbing indications some members of Congress, Republicans all, may have helped the attackers reconnoiter the Capitol, pointing out hidden offices of Democratic Party leaders.

One Republican lawmaker openly encouraged rebellion. Rep. Mo Brooks of Alabama, outfitted in camo, riled up the Trumpian mob before its attack. Another, Republican Lauren Boebert of Colorado, tweeted out the location of Pelosi who was then being hunted by the mob. A Boebert text described a plan to put a bullet in Pelosi's head on TV. Think about what America would be like today had the insurgents assassinated leaders by firing squad or hanging them from the gallows they set up outside the Capitol.

Brooks and Boebert must be expelled from the House. Failure to do this will only give succor to others tempted by traitorous opportunity.

Democratic lawmakers who reported seeing, pre-siege,  extremist Republicans giving guided tours to insurgency leaders are worried the riot had even further traitorous inside help. Coming investigations will tell us the facts, especially if prosecutors are smart about leveraging cooperation in return for less severe sentences.

That we may have a Fifth Column in Congress immediately alarmed unwitting collaborators from the dominant economic force in America, big corporations. From American Express and AT&T to Tyson Foods and United Parcel Service, many big companies stopped, at least for now, aiding and abetting with money these faithless enemies of America.

We live in strange times when we need help from soulless corporations to defend our liberties. To be sure, they acted out of self-interest. Under a dictatorship, corporate directors and executives would be forced to bend to the will of an unelected and unaccountable autocrat who could eviscerate their privileges and plunder their wealth.

Disloyalty and oath-breaking by officials also marked the 1860s, when some representatives, senators and federal judges used their power to wage war on the United States. Until they were stopped. Texas lawyer Barbara Radnofsky tells some of this compellingly in her concise book A Citizen's Guide to Impeachment.

The costs of Trump's Army waging war on our government will drain resources from improving America, from perfecting our union.

To secure our safety, National Guard troops sleep on the cold marble floors of America's Capitol. Fences and walls are becoming ubiquitous, a twisted outgrowth of Trump's lie that he would build a wall. Other barriers, metal detectors and other protections against domestic terrorists are abounding.

Trump's Civil War did not begin with the murderous attack on our Capitol. It dates to at least August 2017 when his violent thugs marched in Charlottesville, Va., shouting Nazi slogans. "Jews will not replace us" and "blood and soil," they chanted while marching past a synagogue. The next day one of them drove his car into a crowd, killing Heather Heyer, the first fatality in Trump's Civil War.

What these rebels heard the next day, what instilled them with bravado, was not Trump's confusing comparison of anti-Semitic racists and the counter-demonstrators, but this line about themselves: "very fine people."

Don't make the mistake of thinking there is no Second Civil War just because all is peaceful where you are. Six days before rebels bombarded Fort Sumter on April 12, 1861, The New York Times reported that an attack was imminent. But once the fighting began, there was no battle of Grand Rapids, no skirmish in Rochester, no siege in Cincinnati. In some states, such as Oregon, all regular Army were withdrawn and volunteers maintained military outposts and kept watch on Confederacy sympathizers.

That is how wars take place. People may be sipping espresso in sidewalk cafes or picnicking beside a stream while soldiers fire on one another within earshot.

As we prosecute this war on Trump's militias and half-organized renegade insurgents, we must give no quarter in terms of criminal prosecution, especially for seditious conspiracy and murder. Where they fire their arms, we must respond with lethal force as the laws of war allow. But we must be better than the attackers.

We must take care not to give Trump's army a perverse victory by destroying the soul of America, by losing sight of our nation's great purpose. We must not descend into a militarized safety zone.

Instead, we must build up the institutions we have damaged with decades of malign neglect—schools, colleges, public health and more. We need law enforcement to act as guardians instead of warriors. Even restoration is needed of public furniture to parks and bridges, making life pleasant and commerce efficient.

We must make our union more perfect through caring for our citizens, providing the tools for stable and prosperous lives and vigorous debate about the way we want to order our liberty.

We must keep in our hearts and our politics the fundamental purpose of our government—to ennoble the human spirit with liberty and fraternity so that our people can attain the best that our nature makes possible.