Impeachment trial 2, day 1: Now the Republicans are the party of terrorism

Trump is officially gone, but his specter hangs over Washington — and Republicans are still shackled to him 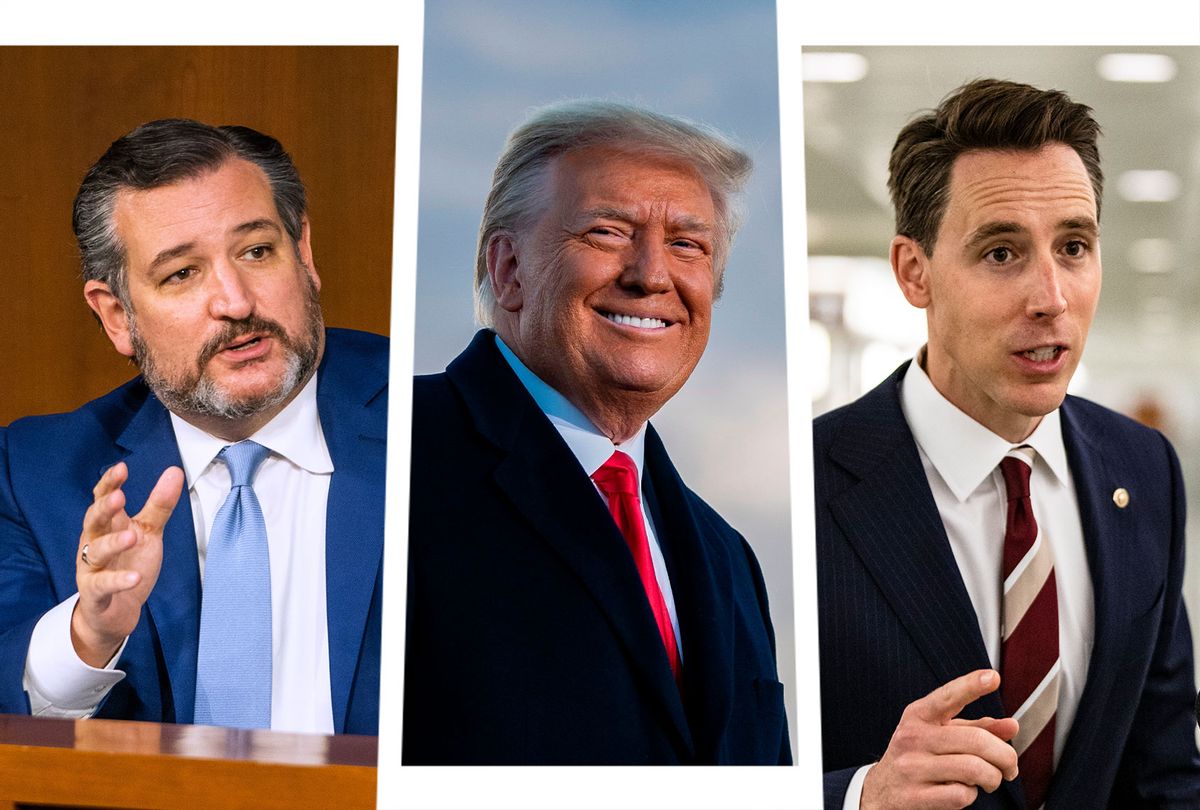 Tuesday was the first day of Donald Trump's impeachment trial for inciting insurrection and a lethal attack on the Capitol as part of a larger coup attempt.

The public evidence of Trump's guilt is overwhelming and conclusive. His conviction by the Senate should be a fait accompli.

The Democratic House managers' presentation of the case against Donald Trump was devastating. His attorneys were rendered impotent in response — yet they tried as hard as they could to create an alternate universe.

Trump's lawyers presented a reality-denying, dangerous, craven and absurd defense, in which they claimed that to follow the Constitution and the rule of law by convicting the former president for insurrection would lead to a second civil war. On Twitter, the bestselling writer Don Winslow aptly summarized the underlying logic of Trump's defense: "We should not prosecute murderers because to do so might upset their family."

Senate Republicans have already signaled that they will not vote to convict Donald Trump for his crimes against the country. It is highly unlikely that there is any amount of evidence which could convince them otherwise.

Why? At this point, they have pledged their allegiance to Donald Trump. The Republican Party is now his. Trump's voters view him as a demigod and shadow president who was "betrayed" by the deep state and other forces who unjustly stole the 2020 election from him (and them).

Trumpism, like today's version of conservatism more generally, is a type of religious politics. As such, the Trumpists will punish any Republican officials who dare to criticize Trump in any way. Most importantly, the Republicans in Congress overwhelmingly agree with Donald Trump's neofascist, anti-democratic politics. Ted Cruz and Josh Hawley appeared to cheer on the Capitol attackers. Some Republicans may even have assisted Trump's mob in their assault on Congress by providing information on the layout of the Capitol complex and the locations of Mike Pence, Nancy Pelosi, Chuck Schumer, Alexandria Ocasio-Cortez and other congresspeople who were in danger of kidnapping, assault and likely execution.

Trump may no longer be president but his hold over the Republican Party and its voters remains largely intact.

In voting to acquit Donald Trump for encouraging political violence and insurrection, with the evident goal of nullifying the 2020 presidential election and overthrowing democracy, Republicans in Congress are formally announcing their endorsement of right-wing terrorism as a legitimate means of gaining and securing political power.

The central fact of American politics today is that one of the country's two major political parties is broken. Not merely wrong, but broken in a fundamental way, hostile to democracy and incapable of serving as a good-faith partner in governing.

Trump repeatedly attempted to overturn a legitimate election, an effort that culminated in inciting a mob that threatened the lives of members of Congress. Yet Republicans in that body cannot bring themselves to inflict the appropriate constitutional punishment for this kind of offense even after he has left office and is no longer needed to get judges confirmed and tax cuts passed.

Democracies require accountability to function. Political elites must be held responsible for grievous errors and punished accordingly. The GOP's decay has destroyed this possibility — but the Senate trial is a necessary step toward fighting back.

Past is prologue. As with Hitler and Mussolini in the late 1920s and early '30s, many coup attempts fail in their first attempts. If Trump is not impeached and convicted for the crime of insurrection, another coup attempt by Republicans and other right-wing extremists is all but guaranteed. To help deter such an outcome, Trump's co-conspirators (including those in Congress) should also be investigated, put on trial and convicted for criminal and civil crimes as well.

The Republican Party's final embrace and endorsement of right-wing political violence and terrorism is not a surprise. For decades, such tactics have been increasingly encouraged and normalized by right-wing opinion leaders. Trump's second impeachment trial offers one more moment when they are showing the American people and the world exactly who and what they are.

On this, William Rivers Pitt warns at Truthout:

The Republican Party today is about one thing: Using democracy to destroy democracy, and all in the name of their thwarted autocratic leader. They don't want to make deals. They want to take, and take, and that is all.

You don't make deals with that if you are the Democrats. You defeat it, using the majorities millions of voters and grassroots activists labored to provide you. You pass legislation by hook or by crook that improves people's lives whether they want it or not. FDR's Tennessee Valley Authority program is instructive: You win, make things better for people, and wait for the light bulb moment to arrive.

Today's GOP is a beast. You don't negotiate with rabid dogs. You're a damn fool if you try. …

There is an old saying: If there are 11 people seated at a dinner table with a fascist, and none of them are denouncing the fascist, there are 12 fascists at that table.

That is the Republican Party in a nutshell. There is no cooperating with this mayhem. There is no trying to get along, no making concessions, no searching for bipartisan compromise.

During his 2016 campaign, Trump loved to recite a poem that concluded with the line, "You knew damn well I was a snake before you took me in." Whatever he thought he meant, it was revelatory. Believe him. He knows himself, his followers and the right-wing media very well.

The Democrats and President Biden must understand that "unity" and "compromise" and attempts at bipartisanship with today's Republican Party are to be avoided. Any such efforts do the work of betraying democracy, the common good, the rule of law and the Constitution.

Democrats have the presidency and control both chambers of Congress — but only by tenuous margins. They have a public mandate for their agenda, and Biden's efforts so far have been embraced by a large majority of Americans. After the horrors of the Age of Trump, the Democrats must use their power for the common good. More important still, they must accept that today's Republicans view politics as a life-and-death struggle where winning is everything, not a give-and-take governed by shared values.

As they will show by acquitting Donald Trump and continuing their full-on embrace of American fascism and white supremacy, today's Republican Party considers the Democrats and their voters as existential enemies. It is long past time for the Democrats to respond in kind.