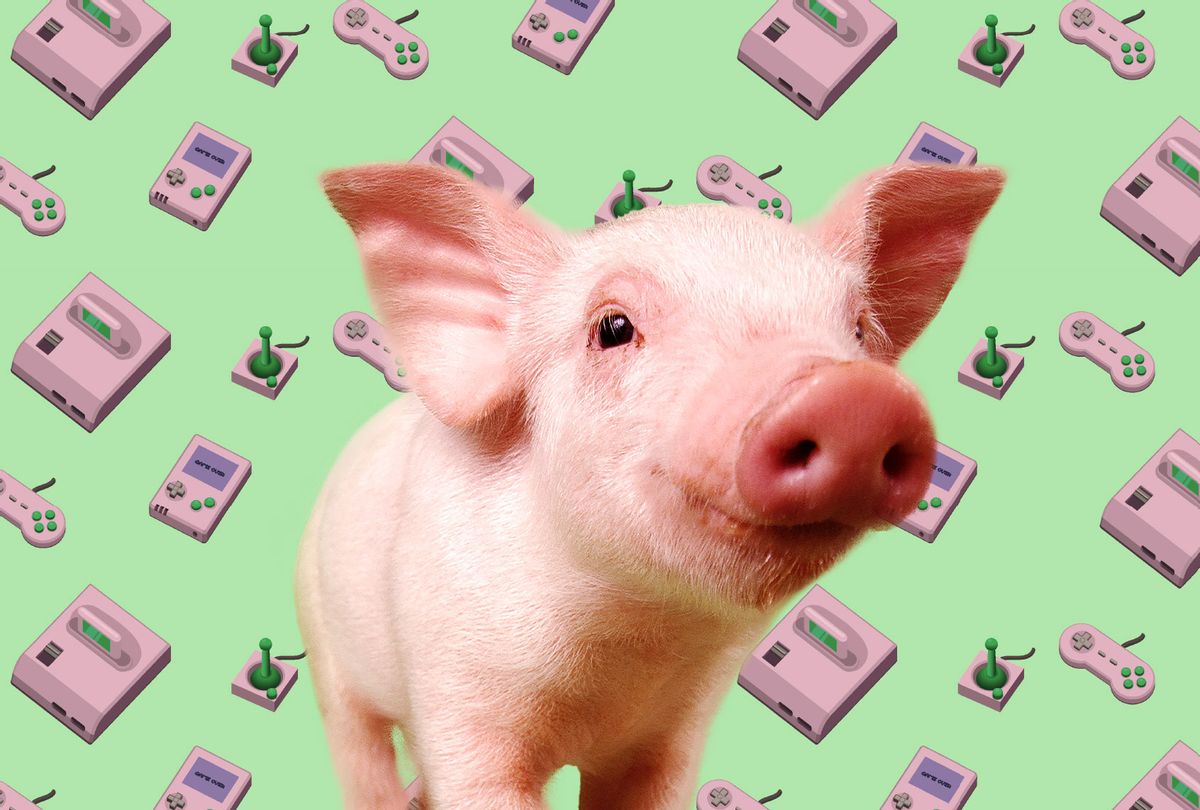 No, pigs haven't learned to fly — but they have learned to play video games. In fact, they may even have fun while they're gaming.

A quartet of pigs — Panepinto micro pigs Ebony and Ivory, and Yorkshire pigs Hamlet and Omelette — learned how to play a video game by using their snouts to move an arcade-style joystick that would steer a cursor into various walls on a computer screen, as described in a research paper published in the journal Frontiers in Psychology. In the process, they provided scientists with a new insight into the depth of pig intelligence and revealed that pigs, like human beings, may be able to both have fun playing video games and bond with other living creatures as they indulge in the sheer joy of gaming.

"The pigs were allowed to work at their own pace always and could end sessions at will," Dr. Candace Croney, lead author of the paper and professor of comparative pathobiology and animal science at Purdue University's Center for Animal Welfare Science, told Salon by email. "When we were cleaning and allowing them time to freely interact with toys and trainers who were present, it was common for them to walk up the ramp and try to initiate a computer session even if it wasn't scheduled." They continued gaming even when the food dispenser broke; that dispenser had been used to provide them with tasty rewards as an incentive for playing.

"On some occasions, they probably kept playing even if the food dispenser jammed because they were hoping treats might start dropping again," Croney explained. "At other times, they did seem to enjoy the experience and would keep going just with verbal praise and petting, which based on their behavior, they clearly enjoyed as they solicited that often. So it may have been a combination of something they enjoyed about doing the task itself, but also the positive social interactions they got while working, even though they routinely got those outside of their computer sessions."

Dr. Sarah T. Boysen of the Comparative Cognition Project, a co-author of the paper, echoed Croney's observations, writing to Salon that "while we can't know what the pigs were thinking, I think they did, in fact, enjoy working on the video task. They are, no surprise, highly food-motivated, so that also likely played a part."

Croney explained to Salon that scientists already knew that pigs were quite intelligent, so the remarkable find here is not that our four-legged porcine friends are a brainy bunch. It's that they were able to display a highly specialized type of intelligence and learning ability that "nothing in the natural behavior or evolutionary history of the pig" would have previously indicated they were capable of doing.

"What's different here from any other sort of learning previously demonstrated, where a pig simply performs a learned behavior and gets a reward, is that the pigs had to grasp the very difficult concept that the thing they were manipulating (the joystick) was having its effect on a 2-dimensional computer-generated image (the cursor) that they could not touch, smell or interact with directly," Croney told Salon. "That sort of conceptual learning is a huge mental leap for any animal as this would never happen in the real world."

The study tells us much about how sophisticated and intelligent pigs are. And the pigs themselves had a happy ending: they did not get addicted to video gaming as humans do, and had good lives after they were no longer involved in the study.

"At the end of their time on our study, all pigs (except one who developed a serious health problem that required us to make the difficult decision to have a veterinarian euthanize him to avoid suffering) were rehomed to farm sanctuaries," Croney wrote to Salon. "The micro pigs lived out their lives interacting with other animals and people at children's zoos. We've had several people inquire and, in retrospect, I wish we'd thought to add this information to the scientific paper."