Why Biden must shut down U.S. support to the brutal el-Sissi regime in Egypt

Egypt's dictator is trying to repair his image — and preserve billions in U.S. aid — with Trump out of office 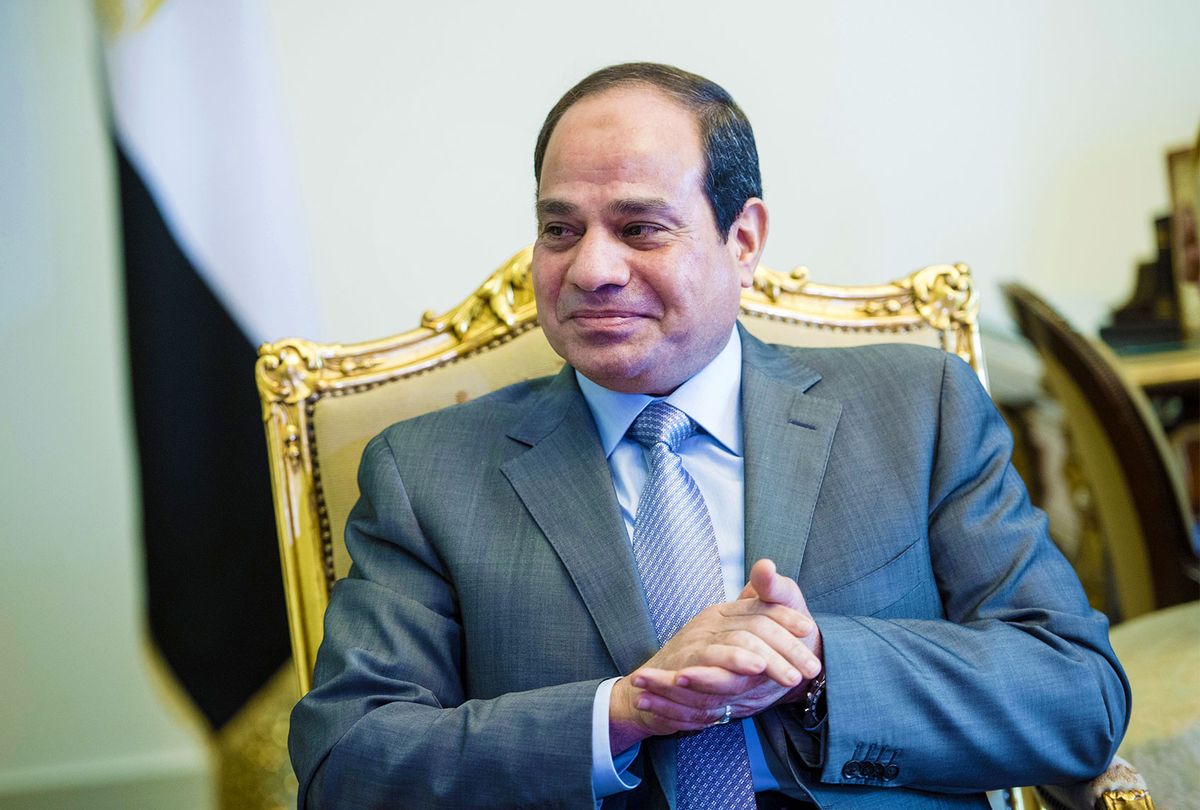 Egyptian President Abdel Fattah al-Sisi waits for a meeting with US Secretary of State John Kerry at the presidential palace in Cairo September 13, 2014. Kerry arrived in Cairo on the latest leg of a regional tour to forge a coalition against Islamic State jihadists in Iraq and Syria. (BRENDAN SMIALOWSKI/AFP via Getty Images)
--

Under Donald Trump's presidency, Egypt, as well as Saudi Arabia, Israel, the United Arab Emirates and other repressive regimes had virtually free rein to commit unchecked human rights abuses without worry that they might be chastised or lose U.S. diplomatic and financial support. But when Joe Biden won the 2020 election, President Abdel-Fattah el-Sissi of Egypt started to worry. That's when he contracted lobbying powerhouse Brownstein Hyatt Farber Schreck for $65,000 a month.

The pro-Cairo lobby team includes a number of former politicians, including former Republican congressman Ed Royce, who chaired the influential House Foreign Affairs Committee from 2013 to 2018. The most shocking PR agent for the Egyptian regime, however, is Nadeam Elshami, former chief of staff for House Speaker Nancy Pelosi. "It's inconceivable that a man who spent his younger years in Egypt, comes from a Muslim family that supported the 2011 Arab Spring and was a key Democratic staffer in the U.S. Congress would end up lobbying for a regime that jails, tortures and murders tens of thousands of Egyptians," says Mohamed Ismail of  Egyptians Abroad for Democracy Worldwide.

Brownstein boasts many accomplishments, including pushing Congress to obtain compensation on behalf of the hostages held in Iran in 1979, recovering artifacts plundered during the Armenian genocide, securing compensation for housing developers who had to mitigate asbestos from former U.S. military sites, and securing increased funding for cancer research. Representing Egypt under el-Sissi is unlikely to be something Browstein Hyatt Schreck will brag about.

In July 2013, el-Sissi seized control of Egypt in a military coup that removed Mohammed Morsi, the country's first democratically elected leader. The following month, on Aug. 14, his military massacred approximately 1,000 civilians engaging in peaceful protest at Rabaa al-Adawiya Square. Human Rights Watch Executive Director Kenneth Roth called the Rabaa massacre "one of the worst killing of demonstrators in a single day in recent history," pointing out that the violence was "intentionally planned at the highest levels of Egyptian society." Between July 2013 and May 2014, Egyptian authorities detained, charged, or sentenced more than 40,000 people. Many of the detainees — demonstrators, dissenters and journalists — were held without trial. Others were tried without due process and sentenced to death.

In 2015, el-Sissi governed without an elected parliament, giving himself almost total impunity for the attacks he carried out against civil and political rights. Effectively, all the human rights gains that had been achieved during the 2011 Arab Spring that ousted longtime Egyptian ruler Hosni Mubarak were lost when el-Sissi took over. His reign of power has continued in this fashion, with Egyptians experiencing surging human rights abuses and a large-scale breakdown of civil society.

In April 2019, el-Sissi's government passed constitutional amendments allowing the leader to remain in power until 2030. In the fall of 2019, Egyptian authorities launched their biggest crackdown since el-Sissi seized power in 2013. According to Amnesty International, over 2,300 people, including more than 111 children, were taken into custody in sweeping and targeted arrests of peaceful protesters, journalists, human rights attorneys, politicians and political activists. On Jan. 13, 2020, Egyptian-born U.S. citizen Mustafa Kassem died following more than six years of incarceration in Egypt. Kassem had been arrested in August 2013 in Cairo on claims that he had participated in protests against el-Sissi's military regime. He suffered from beatings and was held in pretrial detention for over five years before finally, without due process, receiving a sentence of 15 years.

The COVID-19 pandemic has exacerbated the already abysmal prison conditions in Egypt and el-Sissi's government has used the crisis as a pretext to further silence its critics and make use of pretrial detention without judicial review.

Egypt's North Sinai, a sparsely populated area bordering Israel and the Gaza Strip, is a particularly egregious example of the country's human rights abuses. Attacks by armed groups, including ISIS affiliates, on Egyptian government installations began to rise after the 2011 Arab Spring uprising but increased dramatically following el-Sissi's 2013 coup. Instead of protecting Sinai residents in their fight against militants, the Egyptian military has "shown utter contempt for residents' lives, turning their daily life into a nonstop nightmare of abuses," said Michael Page, Human Rights Watch's deputy director for the Middle East and North Africa.

The Egyptian military in the Sinai has been engaging in torture, disappearances (including of children as young as 12), mass arbitrary arrests, extrajudicial killings, home demolitions, severe curfews resulting in food shortages, and air and ground attacks against civilians. According to Human Rights Watch, these actions amount to war crimes and, according to a 2020 report by the U.S. Department of State, Egypt has repeatedly refused U.S. requests to observe how its military equipment is being used in the Sinai.

The history of U.S. financial support for Egypt dates back to the 1978 Camp David Accords and the subsequent 1979 Egypt-Israel peace treaty, when the U.S. began to provide Egypt with aid at two-thirds the rate of U.S. aid to Israel. According to the U.S. Department of State, since 1978, Egypt has received more than $50 billion in military aid and $30 billion in economic assistance. Currently, the U.S. gives Egypt $1.3 billion per year in military aid — more than $3.5 million every single day — making Egypt the second largest recipient of U.S. military assistance after Israel.

This largesse flowed during the reign of Mubarak and continues today, despite el-Sissi's record of massive human rights abuses. Following the horrific 2014 Rabaa Square massacre, President Obama halted the delivery of U.S. tanks, missiles, fighter jets and attack helicopters to Egypt. By 2015, he relented and lifted the arms hold, however, citing the need "to address the shared challenges to U.S. and Egyptian interests in an unstable region." Trump famously referred to el-Sissi as his "favorite dictator," and praised the Egyptian leader for doing a  "fantastic job." In August of 2017 the Trump administration did cut $96 million and delayed $195 million in military assistance to Egypt over the country's failure to reduce its human rights abuses, a new law el-Sissi approved to restrict the activities of nongovernmental organizations, and Egypt's relationship with North Korea. But these actions were not as tough on Egypt as they appeared to be. According to The New York Times, "by pausing the provision of $195 million in military funding, the Trump administration saved the money from expiring entirely on Sept. 30. This way, Egypt could eventually get the money if its record on human rights improves." Indeed, the funding was later released without any change in Egypt's policies.

Some members of Congress have tried to take action. In October 2020, 56 representatives — 55 Democrats and one independent — released a letter urging el-Sissi to release prisoners "unjustly detained for exercising their fundamental human rights." The call was echoed by more than 220 European lawmakers. In 2014, Congress began implementing the "Leahy laws" on a portion of aid money to Egypt. These laws prevent U.S. security assistance to a foreign security force unit when there is credible information that the unit has committed a gross violation of human rights.

In December 2020, Congress made $75 million (a small portion of the total $1.3 billion) conditional on human rights improvements, without the U.S. State Department being able to waive the conditions by citing U.S. national security interests.

Unlike Trump, Joe Biden has been quite critical of el-Sissi. Commenting on the release of an Egyptian-American medical student, then-candidate Biden wrote on Twitter: "Mohamed Amasha is finally at home, after 486 days in an Egyptian prison, for raising a protest banner. The arrest, torture, and exile of activists like Sarah Hegazy and Mohamed Soltan or threatening their families is unacceptable. No more blank cheques for Trump's favorite dictator."

Shortly after it became apparent that Biden had won the 2020 U.S. election, Egypt began releasing some political prisoners, including three directors of the well-respected Egyptian Initiative for Personal Rights — Gasser Abdel-Razek, Kareem Ennarah and Mohamed Basheer. On Feb. 6, the regime released Al Jazeera journalist Mahmoud Hussein, who had been in prison since December 2016 for  "publishing false information and belonging to a banned group." After Hussein was arrested, el-Sissi banned Al Jazeera and other news outlets critical of his rule. Reporters Without Borders has called Egypt one of the world's biggest and worst jailers of journalists.

Certainly President el-Sissi is afraid that his days of free rein to commit human rights abuses are over now that Trump is out of office. That's why he is so desperate for the help of Brownstein Hyatt Farber Schreck to whitewash his image and keep U.S. military assistance flowing. But the Biden administration and Congress must not be swayed by Egypt's release of a few select prisoners or the lobbying efforts of well-compensated Brownstein employees like Nadeam Elshami. They should put a "stop payment" on the U.S. taxpayer-funded check that has enabled el-Sissi to operate with impunity.