A recent study suggests women are more likely to take COVID seriously. But in many countries, they’re going unheard 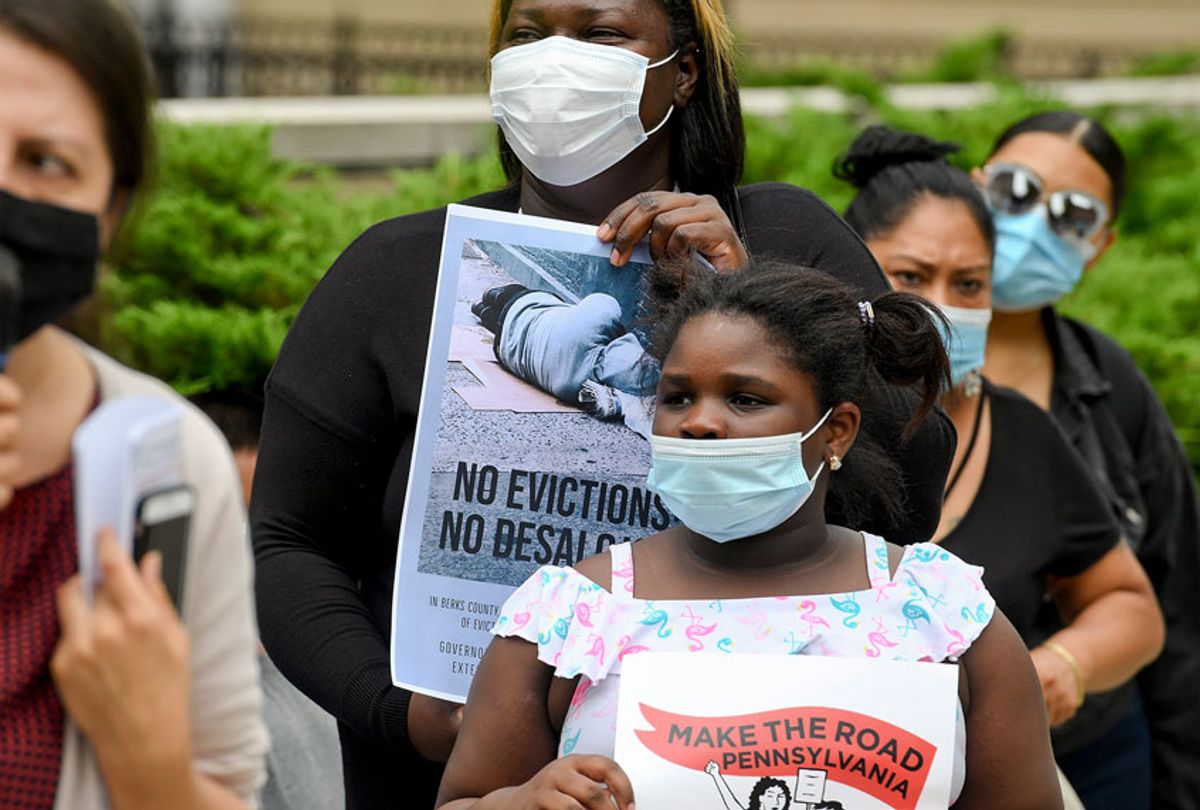 During a protest organized by Make the Road Pennsylvania outside the Berks County Services Building in Reading, PA Tuesday afternoon September 1, 2020 to call for Gov. Wolf and the State Legislature to extend the eviction moratorium in Pennsylvania indefinitely. The group is concerned about the risk of eviction to people affected by the economic downturn resulting from the ongoing COVID-19 / Coronavirus pandemic. (Ben Hasty/MediaNews Group/Reading Eagle via Getty Images)
--

In March of 2020, Uddhav Thackeray, the chief minister of the state of Maharashtra in India, spoke directly to his male constituents about the emerging Covid-19 crisis. "I am at home listening to Mrs. [Chief Minister]," he said, referring to his wife, Rashmi. "You listen to your home minister."

It was a significant message in a patriarchal society where women's voices have traditionally been muted in the political, economic, and public discourse. Leading by example, Thackeray was acknowledging that women would have a key role to play in encouraging the adoption of public health precautions. And he seemed to anticipate that they might be more conscientious than men in responding to the new viral threat.

A year on, as the Covid-19 pandemic continues to rage across the globe, research suggests that Thackeray may have been onto something. A recent study published in the Proceedings of the National Academy of Sciences concluded that women are more likely to take Covid-19 seriously — and more likely to comply with public health recommendations like mask wearing and social distancing. The researchers surveyed more than 21,000 individuals across eight different countries last March and found that 59 percent of female respondents considered Covid-19 to be a very serious health problem, compared with just 49 percent of men. Women were also 6 percentage points more likely to agree with proposed social distancing measures.

It's worth noting that the study considered gender only in binary terms, rather than along a spectrum, and that the authors were not able to single out an underlying mechanism. In an email, two of the study's authors, Vincenzo Galasso and Paola Profeta of Bocconi University in Milan, stressed the need for further research. Nevertheless, the trend held across all eight countries, and a follow up survey in April yielded similar results. The authors also say their results are consistent with another much-discussed observation: Women-led countries have been among the most effective in responding to the pandemic.

This makes it all the more discouraging that, at virtually every level of society, women have been inadequately represented in policy and decision-making surrounding Covid-19.

A survey of 30 countries conducted by the social justice organization CARE International found that, on average, only 24 percent of Covid-19 task force members were women. In conflict-affected countries, the number fell to 18 percent, according to U.N. Women, the United Nations group dedicated to gender equality. Unfortunately, this is nothing new. As U.N. Women also notes, women's social ties and skills often go underutilized in times of crisis and in peace-building measures.

Women-led countries like Germany, New Zealand, Taiwan, and Iceland have been exemplary in their response to the Covid-19 pandemic. "In recovering better — we must not lose sight of this leadership that women can provide alongside men," U.N. Deputy Secretary-General Amina Mohammed said in May. Yet, despite the warning, the world seems to have done exactly that.

There is no shortage of ways to include gender in our pandemic response, amplify the voices of women, and capitalize on their influence in households and communities. For one, we can embrace gender-based public health policies and communication, as Profeta and Galasso advocate. This might mean including gender-related questions in analyses of Covid-19 impacts, ensuring that data collection plans allow for gender disaggregation, and considering the different needs of women and men in vulnerable populations.

We must recognize that the pandemic has affected women in unique ways. With social distancing measures in place, many women found themselves trapped with abusive partners, increasing their risk of intimate partner violence. Sexual and reproductive health services were disrupted in many places. Around the world, women faced increased risks of early and forced marriage, and of being victimized by sex trafficking. Inadequate representation at all levels of decision-making meant that many of these gender-based impacts of the pandemic went unrecognized longer than they should have, and that the response was slower than it could have been.

Women — who tend to serve as primary caregivers to children and the elderly, and who often hold considerable influence in their homes and communities — could also play a key role in promoting compliance with Covid-19 protocols. Even simple behavioral changes could have untold impact. Mask-wearing mandates alone reduced the number of new Covid-19 infections by around 45 percent, one German study found.

As governments around the world continue to order lockdowns and quarantines — and as many countries move into a new, vaccine-rollout phase of the pandemic — it will be important to engage women, especially marginalized women, in our public health interventions. A more inclusive Covid-19 response will not only help us address a myriad of gender-based issues, it just might help us all navigate a quicker path to a new normal.

Disha Shetty is an independent science journalist based in Pune, India. She writes on health, environment, and gender, among other subjects.