"Bridgerton": in defense of "inaccurate" costumes in period dramas

Today's period dramas use creativity to dress characters, as did the 19th century novels they're based on 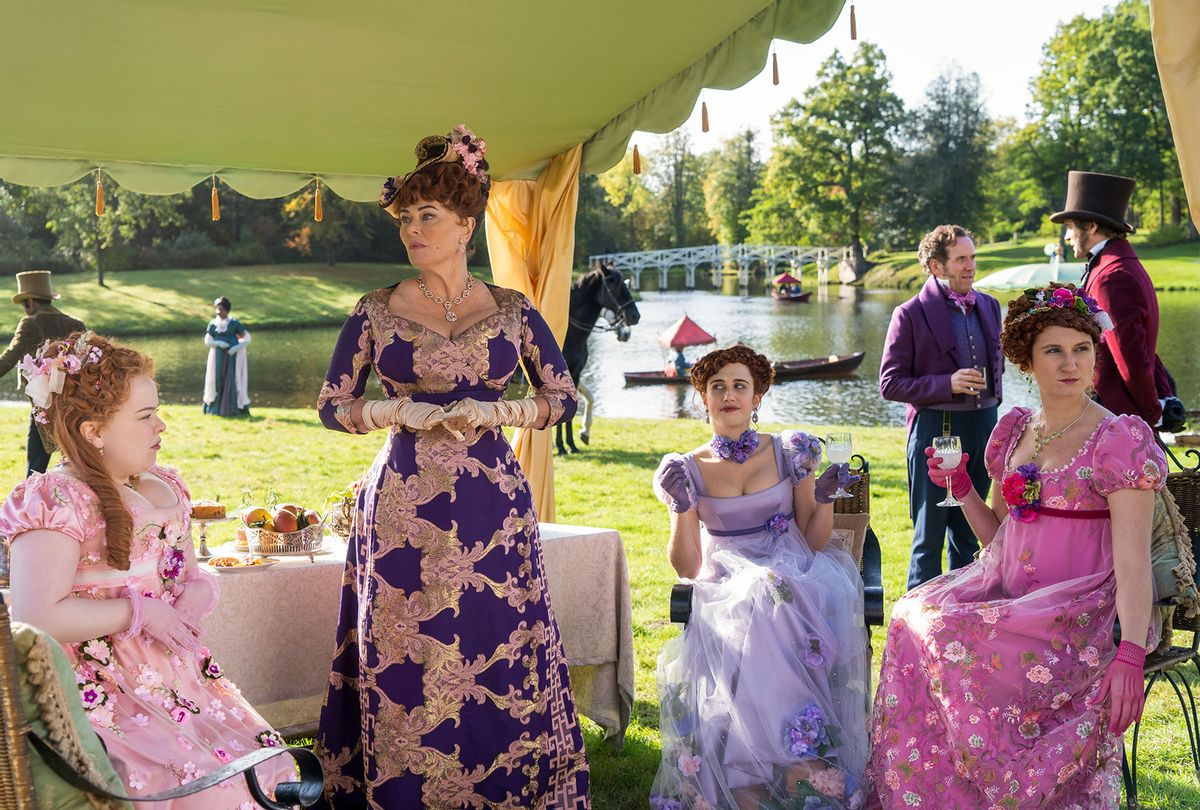 The Featherington clan in "Bridgerton" (Netflix)
--

Netflix recently announced that its new series, "Bridgerton," is the company's most popular show to date. Adapted from Julia Quinn's historical novels, "Bridgerton" depicts a set of upper class families at the beginning of the London "season" in 1813. The show has captured audiences and critics alike, but not all the attention has been positive. Its creative and, at times, inaccurate representation of fashion in the period has come under some criticism.

It is not the only period piece to have attracted such criticism. Netflix's "Enola Holmes" (2020) and Greta Gerwig's critically acclaimed adaptation of Louisa May Alcott's novel "Little Women" (2019), have also had the veracity of their historical costumes questioned.

For some commentators, "inaccurate" costume choices can understandably detract from viewing pleasure. However, the artistic license that these shows take might actually be in keeping with 19th-century novels, which occasionally adapted and idealized fictional fashions too.

While "Bridgerton" gets a lot right in its portrayal of the Regency era, its bold costume choices have been the subject of increasing debate. Created by American costume designer Ellen Mirojnick, the costumes, of which there were 7,500 pieces, unapologetically play with notions of historical accuracy.

Although they largely adopt the long, flowing silhouette reminiscent of the 1810s, the brash colours, almost absurdly high waistlines, and other apparent inconsistencies in the gowns worn by the female characters have raised questions amongst viewers about the legitimacy of these fashions. One article also aptly notes the fashion faux pas that "Bridgerton" makes in its inaccurate use of corsets. In one scene, for instance, Daphne Bridgerton's back is cut and bruised from her too-tight corset, but Regency women would have worn a chemise — a linen undergarment — against their skin to prevent this from happening.

Although "Little Women"'s costume designer Jacqueline Durran won an Oscar for Best Costume Design, critics have argued that the award was "undeserved". The film effectively uses temporal shifts to heighten emotional moments and render the familiar story new. Yet viewers have noted that the use of inaccurate silhouettes complicated such movements in time. There is no notable difference, for example, between the wide skirts the March sisters wear in childhood and the gowns they wear as adults — by which point the shape of the skirt would have changed significantly.

Similarly, the costumes used in "Enola Holmes," set in 1884 and based on Nancy Springer's young adult fiction, are a mix-match of styles from different eras, sparking confusion over the timeline of the tale.

In one scene, two artificial cage crinolines hang in a shop window. Made of a series of steel hoops to expand a skirt, this type of crinoline appeared in June 1856 and had fallen out of fashion by the 1880s, in which the film is set. By then, shops would have been selling bustles — a padded undergarment at the back of women's dress used to add fullness.

But the anachronistic costuming of such productions has historical precedent. Some 19th-century writers adapted fictional fashions to suit their own and their readers' tastes.

One of the most obvious examples is William Makepeace Thackeray's novel "Vanity Fair," which was first published serially between 1847 and 1848. Like "Bridgerton," "Vanity Fair" meditates upon upper-class society, gossip, and issues of propriety in the first decades of the 19th century.

Writing in the mid-19th-century, Thackeray departs from the historical fashions of the Regency era, however, in favour of the fashions of his own time. In an early edition of the novel, a footnote directly addressing the reader declares:

It was the author's intention, faithful to history, to depict all the characters of this tale in their proper costumes, as they wore them at the commencement of the century. But when I remember the appearance of people in those days … I have not the heart to disfigure my heroes and heroines by costumes so hideous; and have, on the contrary, engaged a model of rank dressed according to the present fashion. 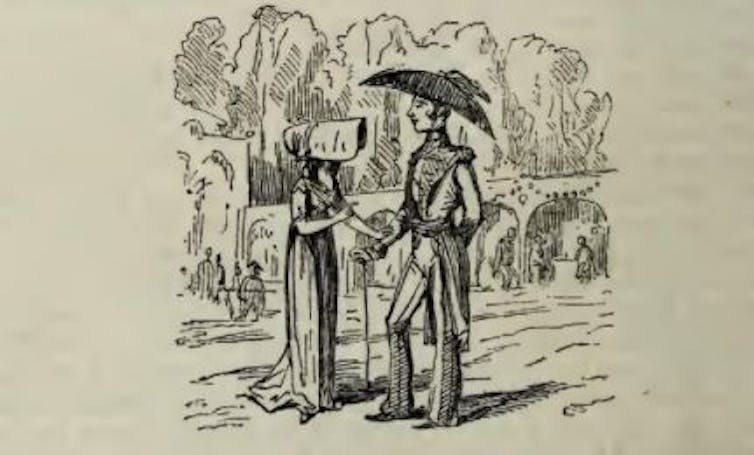 In the above illustration, Thackeray caricatures the fashions of the early 1800s. The angular lines of the man's hat and trousers, and the woman's elongated bonnet, which mirrors the straight line of her dress, are supposed to exemplify "hideous" Regency fashions. 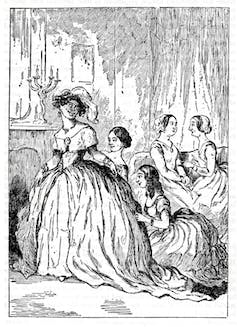 In contrast, other illustrations in "Vanity Fair" show Thackeray's characters in dress typical of the mid-century. The image to the right shows the heiress Miss Swartz adorned in an 1840s ball gown, which is cut low off the shoulders and features a pointed bodice and full skirts.

In addition, historian Anne Hollander notes that Charlotte Brontë's "Jane Eyre" (1847) — the second edition of which was dedicated to Thackeray — likewise plays with the presentation of historical fashion. Though not as overt as Thackeray, "Jane Eyre," which is supposedly set at the beginning of the century, also "evokes those same Romantic clothes contemporary with its authorship".

In this sense, just as costume dramas do today, some 19th-century novels adapted, idealised, and even sexed-up fictional fashions to suit public taste.