The science behind aphrodisiacs 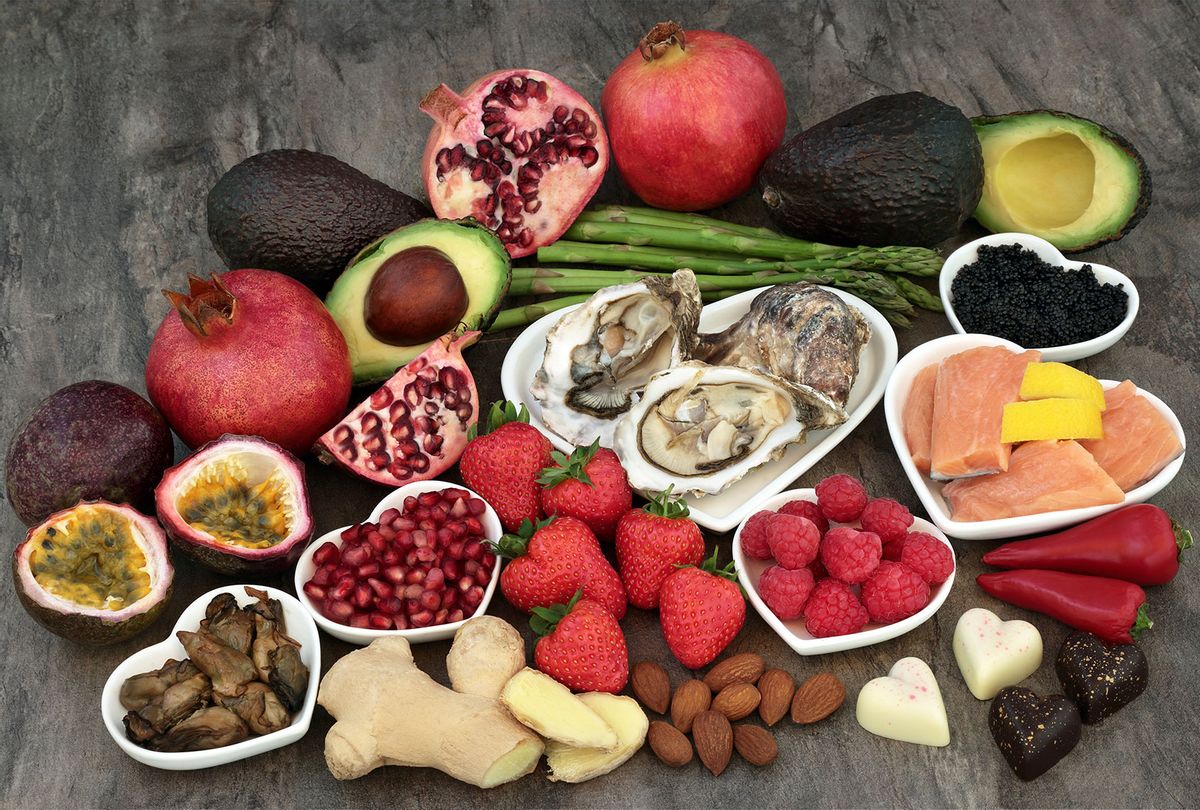 It's Valentine's Day, when couples all over the world plan special dinners and desserts to "get in the mood," as it were. Indeed, in the Western World, our sole holiday celebrating love and romance has its own concomitant food culture: chocolates, strawberries, oysters, caviar and red wine are all intrinsic to Valentine's Day menus because of their reputation for being aphrodisiacs — meaning food that can, supposedly, make one feel more amorous.

The idea that some food or drink are aphrodisiacs dates back millennia: The ancient Greeks believed in the sensual power of pomegranates, truffles and garlic; the ancient Roman poet Ovid recommended everything from eggs to "honey from Mount Hymettus" (a range in the Athens area) to get into the mood; and the medieval philosopher St. Thomas Aquinas argued that meat and red wine could produce the "vital spirit." And Americans seem to believe that certain foods enhance the mood: after all, Americans on average buy roughly 58 million pounds of chocolate in the week leading up to Valentine's Day. And though the idea of aphrodisiac food is widespread, is there any science to it? Do certain foods really make us feel more horny, or romantic?

As it turns out, they do. Nutrition experts say that aphrodisiacs do have some science to them, although that doesn't mean that there are foods which automatically heighten sexual desire.

"Food can act as an aphrodisiac in several ways," Dr. Lauri Wright, spokesperson for the Academy of Nutrition and Dietetics and associate professor at the University of North Florida, told Salon by email. "Some foods relax blood vessels and improve blood flow to the genitals, similar to Viagra. Foods that increase blood flow include red wine, dark chocolate, strawberries, beef, walnuts and avocado. Individuals that don't have compromised circulation won't see any changes from consuming these foods."

She added that, in the case of foods like chocolate, caviar and oysters, which pop culture has accepted as aphrodisiacs, "there is no scientific evidence to support" the belief that they are, and "in fact, no evidence has shown that there is any food that heightens sexual desire." She said that "one 'food' that has been shown to increase sexual arousal is alcohol, by decreasing inhibitions. The downside however is alcohol can decrease sexual performance."

Likewise, there is a psychological component to certain foods acting as aphrodisiacs that is complimented by the way our bodies naturally respond to them.

"Typically things that become associated with sex or as aphrodisiacs are either foods that are very sensual — so that the sight, touch, smell and taste are enticing. I would probably put strawberries kind of in that category," Dr. Nan Wise, a sex therapist and behavioral neuroscientist, told Salon. "They stimulate the senses which can stimulate desire, but I would not call them scientifically anything that is actually an aphrodisiac." Wise also noted that foods can mentally have an aphrodisiac effect, regardless of their actual chemical properties, because they look like things that reminds us of sex — in other words, acting as subtle psychological hints.

"Things like oysters look a little bit like a vulva, so anything that looks like a genital has been associated historically with sex," Wise explained. "Things that look like penises or in some way like female genitalia that have been associated with sex by looking like that. People make the connection with that, but that's not aphrodisiacs." She said that in history sometimes have people taken this more literally, such as when cultures have eaten animal testicles because they are related to reproduction.

"The idea of something being reproduction-related is sensual or exotic," Wise told Salon, adding that "caviar fits both of those categories."

There are some studies which claim to have discovered aphrodisiac qualities in certain herbs. A 2013 study in Pharmacognosy Reviews found that ambrein, a major ingredient in the Arab aphrodisiac Ambra grisea, "contains a tricyclic triterpene alcohol which increases the concentration of several anterior pituitary hormones and serum testosterone." The same study found that Panax ginseng, which is used as an aphrodisiac in traditional Chinese medicine, "works as an antioxidant by enhancing nitric oxide synthesis" in erectile tissue in the genitals.

A 2018 study in the Journal of Chemical and Pharmaceutical Research also identified Panax ginseng as a useful herb in helping sexual dysfunction, noting that the same is true of "Cannabis sativa L." and a number of other herbs.

Martha Hopkins, co-author of "Intercourses: An Aphrodisiac Cookbook," told Salon that there is another psychological way in which food can heighten arousal: The mere fact that you put the thought into preparing someone a meal that you believe they will enjoy and find to be romantic.

When cooking an "aphrodisiac" meal, it is "truly the thought that counts," Hopkins told Salon. She said that most partners feel flattered and turned on by seeing their partners do an elaborate task for them, like cooking, regardless of outcome of the food or ingredients.

Still, the scientific jury is out on whether so-called aphrodisiacs have more than a minimal effect. A 2011 scientific review that analyzed multiple studies into aphrodisiacs concluded that "although most studies showed positive effects of aphrodisiacs on sexual enhancement, more studies are needed to understand their mechanism of action. . . . The need for clinical trials using larger populations is also evident to prove the effectiveness of aphrodisiacs for human use."

Clinical trials aside, the human mind is complex, and humans can be turned on by all sorts of things unrelated to physiological stimuli. If a food seems to put you and your partner in the mood and doesn't hurt anyone, have fun with it.

"I think it really speaks to human beings having a desire to have a desire for sex and mixing up a whole lot of stories... [we] invest in certain substances with the power to turn this on — giving the substances the power of the belief," Wise told Salon.