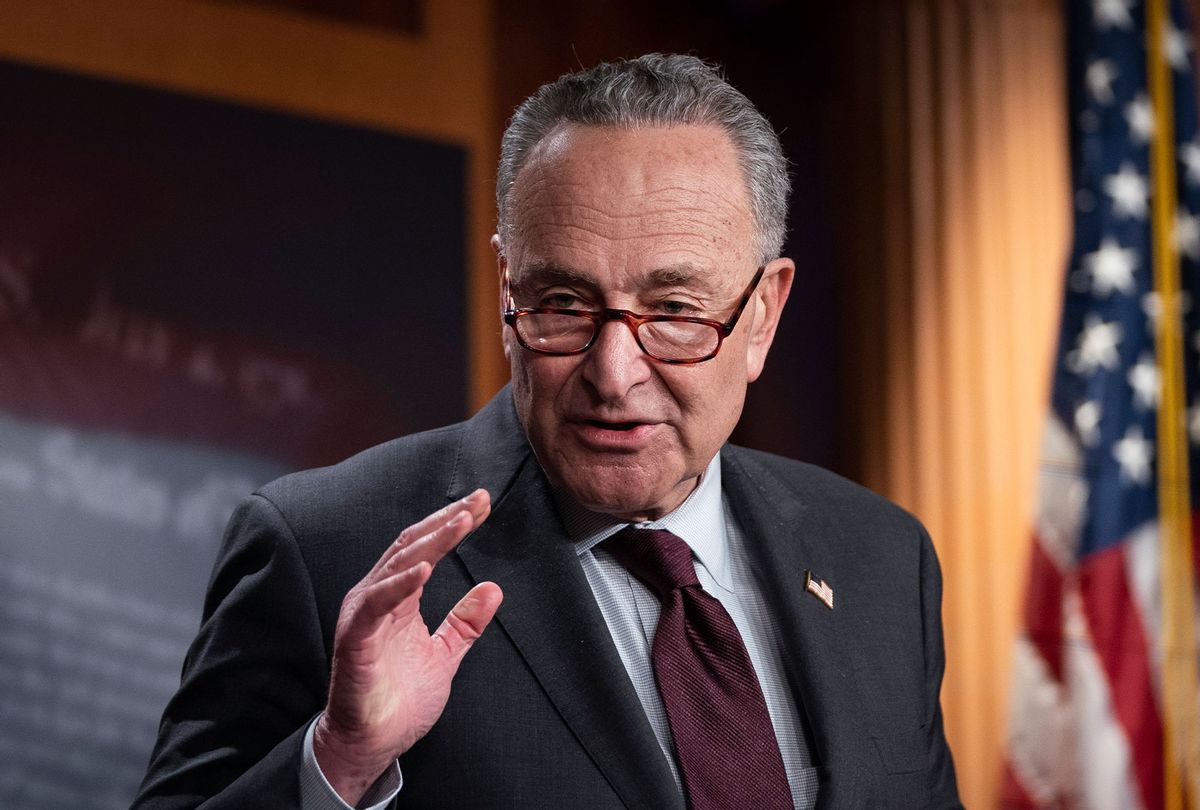 Democrats' failure to convince even just 10 of their Senate Republican counterparts to vote to convict Donald Trump for inciting a deadly insurrection was viewed by progressive lawmakers and activists as a case in point for why the majority party must eliminate the legislative filibuster if it hopes to implement its agenda on climate, immigration, voting rights, and other key issues.

Just seven Republicans on Saturday joined every member of the Democratic caucus in casting "guilty" votes against the former president, leaving the Senate well short of the two-thirds majority — 67 votes — required for conviction.

If Democrats could not persuade 10 of their GOP colleagues to vote to hold the former president accountable for provoking a coup attempt that left five people dead, progressives asked, why would they expect to convince 10 Republicans to join them in breaking the archaic 60-vote Senate filibuster that is standing in the way of crucial legislative priorities?

"The fact that we could not get even 60 senators to vote for the most obvious proposition of convicting Trump is a clarion call for eliminating the filibuster!" Rep. Ro Khanna, D-Calif., tweeted, a sentiment that others echoed in the hours following the Senate's second acquittal of the twice-impeached former president.

"Dear centrist Democrats, you couldn't even get 10 GOP votes to convict the guy who sent a mob to kill you all. You think you can get them to vote on issues like immigration/climate? Come on," immigrant rights activist Erika Andiola said Saturday. "You have to end the filibuster and use every tool at your disposal to get things done."

Senate Democrats are currently attempting to use the filibuster-proof reconciliation process to pass a coronavirus relief package over the objections of intransigent Republicans, but that procedural tool is severely limited by rules requiring all legislative provisions to have a direct budgetary impact.

That means Democrats will likely have to work through "regular order" to advance priorities that don't qualify under reconciliation. If Senate Democrats refuse to eliminate the filibuster — a move that would require the support of all 50 members of the Democratic caucus plus a tie-breaking vote from Vice President Kamala Harris — they will effectively need 60 votes to pass legislation.

In a column Saturday after 43 Senate Republicans voted to acquit the former president, the Washington Post's Greg Sargent wrote that "Democrats must accept the full implications of the GOP's ongoing and intensifying radicalization. And they must be prepared to act upon them."

Now that the vast majority of Senate Republicans voted to acquit former president Donald Trump of inciting violent insurrection, as we all knew they would, Democrats should immediately respond as follows:

2. Be prepared to nuke the legislative filibuster if and when Republicans obstruct it in the Senate.

3. Get the package into law as quickly as possible.

Those are the House and Senate bills that would expand voting rights, make voting easier in numerous ways and place limits on counter-majoritarian tactics such as voter suppression and gerrymandering, which Republicans are cheerfully escalating in numerous states.

Ari Berman of Mother Jones similarly noted Saturday that while Democrats "didn't have the votes to convict Trump ... they do have the votes to stop the next attack on democracy by passing the John Lewis Voting Rights Act and the For the People Act if they abolish the filibuster."

During President Joe Biden's first month in office, Republican senators have already repeatedly shown that they will not hesitate to use the filibuster to obstruct Democrats and try to get their way.

Just days into Biden's presidency, Senate Minority Leader Mitch McConnell threatened to filibuster a must-pass organizing resolution in an attempt to force Democrats to commit to leaving the 60-vote threshold intact. While McConnell didn't get exactly what he wanted, his obstruction did lead Democratic Sens. Joe Manchin of West Virginia and Kyrsten Sinema of Arizona to forcefully reiterate their opposition to eliminating the filibuster.

On Saturday, hours before the Senate voted to acquit Trump, Republicans reportedly threatened to wield the filibuster against Biden's cabinet nominees and legislative agenda if Democrats followed through with calling witnesses in the impeachment trial. As Common Dreams reported, House impeachment managers ultimately backed off under pressure from top Senate Democrats.

"Guess what: they're going to block all this shit anyhow!" Brian Beutler, editor-in-chief of Crooked Media, said in response to Senate Republicans' reported threat. "That's an argument for getting rid of the filibuster, not for agreeing to call witnesses and then immediately caving."