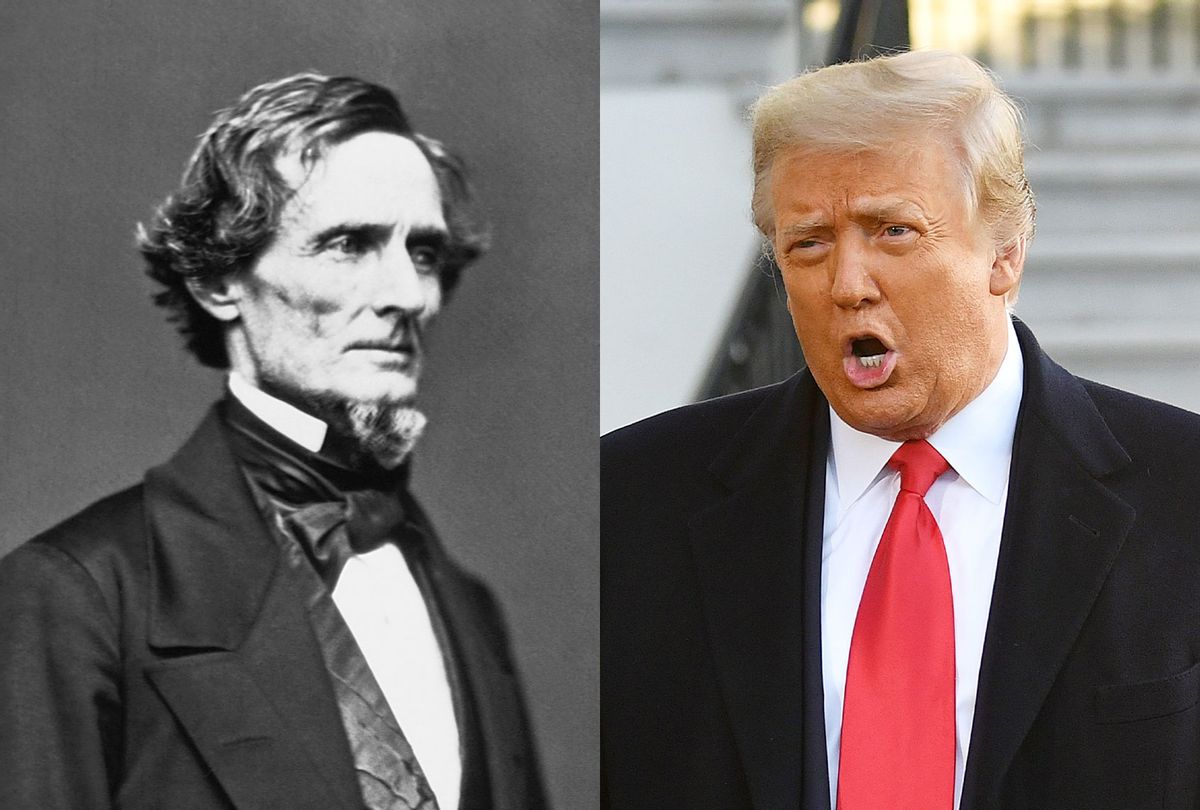 Presidents Day originated in 1885 to honor the birthday of George Washington, who as our nation's first president established the pattern and practice of a peaceful transition of power. That endured up until Donald Trump and his Jan, 6 insurrection that left five people dead, including Capitol Police officer Brian Sicknick.

Forty-three Republican U.S. senators voted on Saturday to acquit former President Donald J. Trump of inciting the insurrection that was witnessed in real time by the entire world on live TV. Last month, 197 House Republicans voted against impeaching Trump for the second time.

It's important to contextualize their abdication with the reality that our nation is in the throes of a mass death event likely to kill a half-million Americans and infect 30 million with a life-threatening killer virus by the end of the month, all while food and shelter insecurity spreads across the land.

Unlike their Senate colleagues Richard Burr of North Carolina, Bill Cassidy of Louisiana, Susan Collins of Maine, Lisa Murkowski of Alaska, Mitt Romney of Utah, Ben Sasse of Nebraska and Pat Toomey of Pennsylvania, the Republican senators who voted to acquit Trump, keeping his political aspirations alive, did not want to jump into the breach that had already proved fatal to Officer Sicknick.

That dozens of people of such privilege and rank, like the congressional Republicans who opposed holding Trump accountable, opted to instead protect their own partisan political position, has ample precedence in our history.

Luckily, for us, the original framers were more visionary in spirit and put the potential of our democracy, not yet fully conceived, above their own personal fortunes, with the awareness that if they did not "hang together" they would surely "all hang separately."

Incredibly, the Republican leader in the Senate concluded that holding Trump accountable should be left to the country's civil and criminal justice system. This provided a procedural fig leaf for the GOP caucus' 'Don't be a snitch' culture, which actually works to undermine the Constitution that serves as the foundation of our criminal and civil law.

By choosing to avoid holding accountable the bully and his mob they fear, Republicans memorialized their subjugation.

"When the holding and keeping of power is the organizing principle then everything else becomes a means to that end," observed biographer and historian Jon Meacham on MSNBC this past weekend. "It may be politically rational, but it is constitutionally derelict."

After the acquittal vote, Minority Leader Mitch McConnell admitted that Trump's actions that resulted in the storming of the Capitol for several hours were "disgraceful" and "a dereliction of duty."

"Fellow Americans beat and bloodied our own police. They stormed the Senate floor," McConnell said. "They tried to hunt down the Speaker of the House. They built a gallows and chanted about murdering the vice president."

The Kentucky Republican observed that Trump's "unconscionable behavior did not end when the violence began," adding that "whatever our ex-president claims he thought might happen that day … whatever reaction he says he meant to produce … by that afternoon, he was watching the same live television as the rest of the world."

McConnell continued. "A mob was assaulting the Capitol in his name. These criminals were carrying his banners, hanging his flags and screaming their loyalty to him. Instead, according to public reports, he watched television happily as the chaos unfolded. He kept pressing his scheme to overturn the election!"

In the minority leader's own words, Trump then had crossed that "Rubicon" line from being the inciter of the riot to an actual participant-by-proxy, with his own vice president now on the run.

"Even after it was clear to any reasonable observer that Vice President Pence was in danger … even as the mob carrying Trump banners was beating cops and breaching perimeters… the president sent a further tweet attacking his vice president," McConnell said.

What was established in the U.S. Senate trial, and supported by a 57-43 bipartisan vote to convict, is a fact pattern far more treacherous and lethal than a bid to delay the certification of the Electoral College. Rather it was a near-successful bid to murder the two elected officials in the direct line of succession after the president.

Add into this crucible the recent disclosure that when the Trump-activated rioters breached the Capitol and sent Pence scrambling for safety, his entourage, which that was sent into rapid retreat, included an Air Force officer who carried the "nuclear football" — a suitcase that contains the nuclear weapon launch codes.

As the House managers' prosecution of the case against ,Trump demonstrated, facts can move minds which accounts for the decision by seven Republicans to go against their party's partisan interests to vote with their Democratic colleagues.

What was clear was that for a number of those senators, it was what Trump did not do after the Capitol riot got underway that helped convince them of his guilt.

What we need now is for the Secret Service to be compelled to disclose publicly what its agents knew, when they knew it, how they sorted it out in real time and whether they saw this coming.

For a few hours there, we had one executive security detail protecting Pence while another was protecting Trump — who, even after he learned Pence was on the run, used his tweet artillery to further incite the mob that was pursuing him.

In terms its trajectory the Jan. 6 insurrection bears a striking similarity to the strategic arc of the assassination of Abraham Lincoln by John Wilkes Booth on April 15, 1865. That plot also targeted Vice President Andrew Johnson, Gen. Ulysses S. Grant and Secretary of State William Seward, who survived a gruesome knife attack.

When Johnson took office after Lincoln's death, he ordered that the several suspects in the conspiracy be tried not by an Article III court, but by a military tribunal.

Four people were hanged for their participation in the conspiracy. (Booth refused to be captured alive and was shot dead by Union soldiers. Meanwhile, Jefferson Davis, a former senator from Mississippi, who became the so-called president of the so-called Confederacy, was arrested and charged with treason in May of 1865. He was never tried.

Two years later, Davis was released on bail raised mostly by prominent Northern abolitionists, including Horace Greeley, publisher of the New York Tribune, who all "advocated for a speedy trial or release of Davis in order to heal the country."

Ultimately, federal prosecutors blinked and never pursued the treason case against Davis for fear that he "would either prove to a jury that secession was legally permitted under the U.S. Constitution or he would be transformed into a martyr if convicted and executed."

Davis remained resolute that his course of action was correct, telling the Mississippi Legislature in 1884, "It has been said that I should apply to the United States for a pardon. But repentance must precede the right of pardon, and I have not repented. … If it were all to do over again, I would again do just as I did in 1861."

In the final analysis it was the North that blinked: In 1978, President Jimmy Carter signed legislation passed by Congress that restored Davis' U.S. citizenship.

In substance we know that from Andrew Johnson onward, the federal government would betray the nation's enslaved African Americans and their descendants by letting the South, driven by its racist paranoia and passion, dismantle the ephemeral gains of Reconstruction.

"One of the great mistakes we have made in the country historically is that in the aftermath of the Civil War we did not hold insurrectionists — rebels — accountable for what they did," observed Meacham on MSNBC.

That's precisely the thought I had when I saw an FBI flyer depicting the Trump insurrectionist who carried the Confederate flag inside the U.S. Capitol, something that had never happened before Jan. 6.

We have no bandwidth to make that mistake again.