Why America's power grids will keep failing us

"They're not adaptive or flexible, and that is really causing a lot of the problems," one expert said 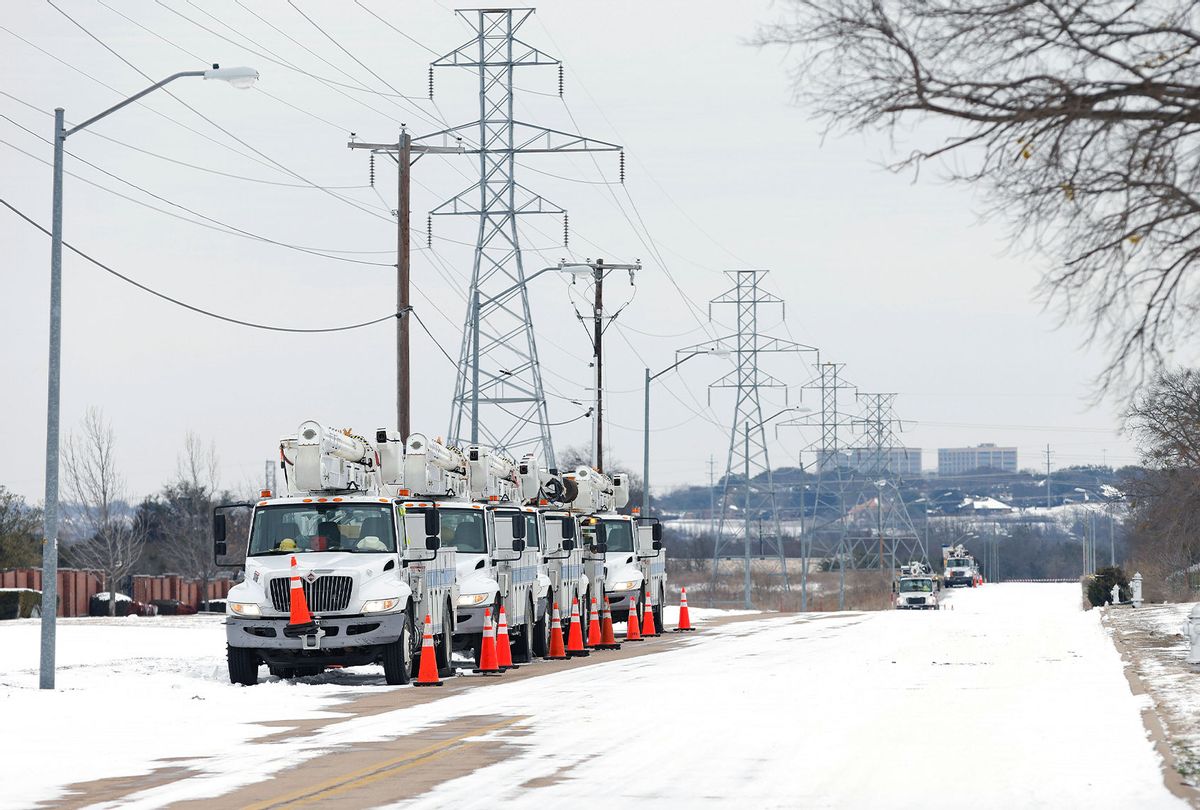 Pike Electric service trucks line up after a snow storm on February 16, 2021 in Fort Worth, Texas. Winter storm Uri has brought historic cold weather and power outages to Texas as storms have swept across 26 states with a mix of freezing temperatures and precipitation. (Ron Jenkins/Getty Images)
--

Wednesday marked the third day millions of Texans found themselves without power following a rare winter storm and frigid temperatures dipping into the low 20s. While power is being restored in some areas, rotating outages are expected to start on Wednesday in Texas.

The situation is dire for many Texans. According to The New York Times, at least 23 people have died as of Wednesday morning. Emergency rooms saw a wave of people with carbon monoxide poisoning, the aftermath of attempts to keep warm. Likewise, clean water access is a growing issue as pipes freeze in the Lone Star State.

And Texas isn't alone: As the remnants of the winter storm make its way across the Midwest, and a second winter storm looms in the Northeast, rolling power outages are popping up in parts of Missouri, Louisiana, Ohio, West Virginia, Kentucky, and Oregon. The situation is eerily similar to what happened in California last summer, when rolling blackouts were sparked by a demand-driven energy shortage; then, a massive heat wave increased air conditioner use and forced rolling power outages. Those blackouts were the first of their kind since 2001 when California faced an electricity crisis.

All these recent incidents are raising concerns over the fragility of the country's fragmented power grid, and how vulnerable these systems are to extreme weather events compounded by climate change.

So what went wrong in Texas?

"Many of the problems we're seeing, both in California now in Texas, are due to the fact that the grid we have in both places is dumb and old, as opposed to being smart, new and flexible," said Daniel Kammen, a professor of energy at the University of California, Berkeley. "Fossil fuel grids" like the one in Texas, and like what California used to have until they transitioned away from them, are "really dumb systems — they're not adaptive or flexible, and that is really causing a lot of the problems you're seeing in Texas today," Kammen added.

Indeed, fossil fuel power plants are generally built to be far away from population centers, which means that the power has to be shipped long distances. This alone, Kammen said, creates a very "inflexible" system. In Texas, the power shortage happened after natural gas plants couldn't supply the 30 gigawatts of power they were expected to supply. To put this in perspective, 30 gigawatts is more than the average demand in California, Kammen said.

"The idea that so much gas would go offline, because of these freezing events, really speaks to a system that's not adaptable," Kammen said. "It''s not able to reroute power because we have smart interchanges on the transmission network; it's a system that is fundamentally not up to speed . . . they don't have enough sensors on the power lines, on the power plants, so they can predict this."

In a smart grid, which would enable a two-way flow of electricity and data enabled by technology, there would be backup generators, and energy storage systems in place that would have the ability to send power if, say, the turbines went down. While ice forced some turbines in Texas to shut down, energy experts agree — despite Texas Republican Governor Greg Abbott casting blame at frozen wind turbines — that frozen turbines are not the root of the cause of the power outages in Texas.

Kammen described the situation in Texas as "policy and technology" failing— especially for low-income communities.

"We know that when these events happen, the power losses are earliest and generally longest in the lowest income communities," Kammen said. "So there's a real environmental justice damage that comes from not having a smarter,  more renewable energy–enabled grid."

Kammen added that California, New Jersey and New York — which have become leaders in implementing solar panels — are examples of how states can implement a renewable energy plan.

"In an ice and snow storm like this, what you would have needed to have people do is literally go and shovel the snow off the roof," Kammen said. "I'm hoping that this will push Texas to recognize the large economic benefit of moving to enabling distributed rooftop solar, and more wind farms distributed across the state can be a real benefit here." Modern wind turbines, Kammen noted, have built-in heating systems.

But the problems with the grid in Texas were also the result of a perfect storm of poor planning, decrepit infrastructure, and blind worship of the free market by policymakers.

Vijay Modi, a professor of mechanical engineering at Columbia University, told Salon what he believes is happening in Texas is the agglomeration of five separate shifts that have happened in America over the last few decades. First, we've built more housing. Second, our civilization has become more reliant on gas. Third, electric heat pumps have become more popular, especially in the South. Fourth, there's been a momentum in some parts of the country to embrace a free market power utility system — especially in Texas. And finally, many of our gas pipelines and power systems — like the one in Texas — aren't weatherized. Indeed, power grids across the country weren't built with climate change in mind.

"All these factors combined with a weather event unusual for Texas added up to an inadequate supply for this rare event," Modi said. "Unfortunately, we are likely to see more rare events in the future because we have so much more housing and people to support with an aging infrastructure and unusual weather systems."

Modi added that now is the time to "rethink how we engineer our systems for resiliency and for reliability."

Both experts had different opinions on whether this situation — more frequent power outages, rolling blackouts to ease the demand on power grids during extreme weather — would constitute the new normal.

"The short answer is that the new normal is not just because of climate and weather, but it's because of our expectations too," Modi said. "I work in countries where many don't have electricity access at all, for them, the new normal is to get at least enough for lighting and communication. Our new normal will go towards, 'I want to be able to run my electric heat, charge my electric vehicle, run my appliances and my WiFi all at the same time maybe and do so reliably.'"

Modi added that America "can and should deploy smarter engineering solutions that don't require a new $20,000 per customer infrastructure investment to get this reliability."

Meanwhile, Kammen deemed the situation in Texas "the new abnormal."

"It's the new abnormal, if anything — because only after the fact can analysts figure [whether] the Texas storm was driven by the abnormal climate change we're seeing."