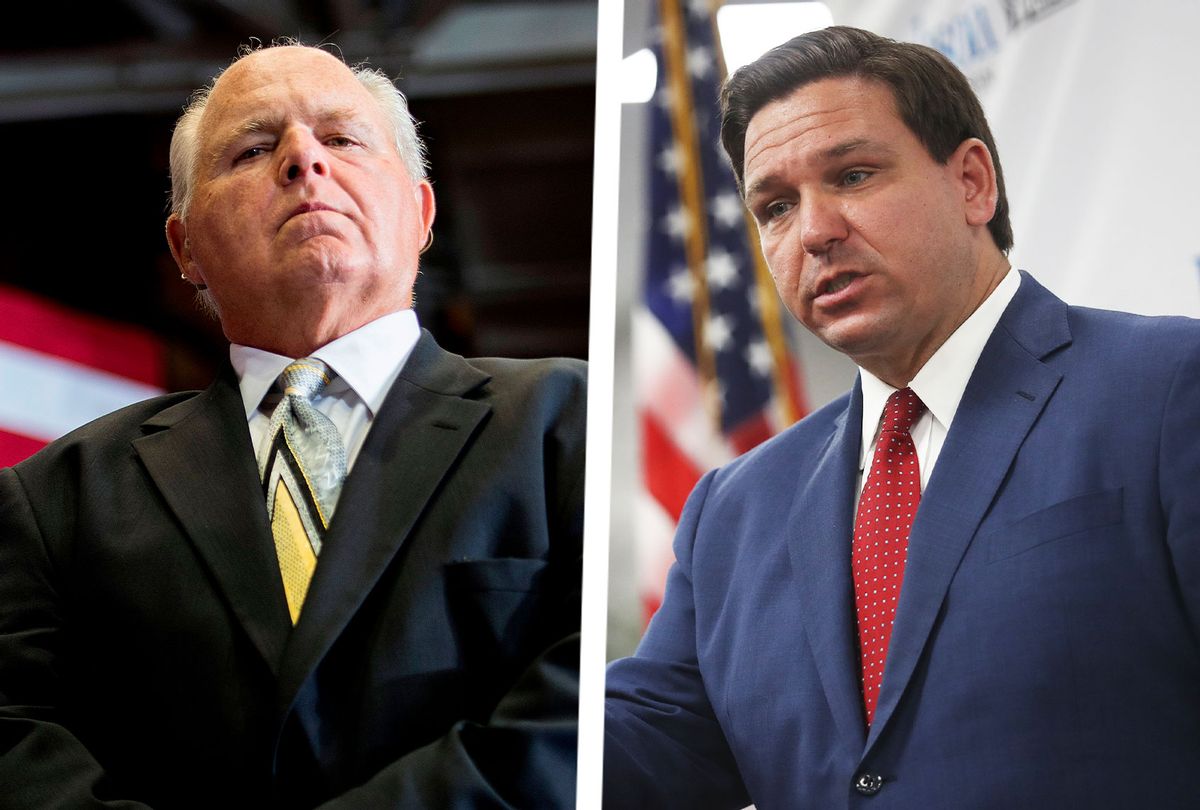 Florida Gov. Ron DeSantis announced on Friday at the Hilton Airport Palm Beach in West Palm Beach that he plans to lower flags at half-mast in honor of the now-deceased conservative radio titan Rush Limbaugh.

According to ABC's WTXL Tallahassee, flags across Florida have been ordered to be lowered when Limbaugh's funeral, the date of which has yet to publicly announced, occurs. Limbaugh, who died of lung cancer at age 70, left behind a $50 million estate in Palm Beach Florida and taped his show just one mile away.

"What we do when there's things of this magnitude," DeSantis said, lamenting Limbaugh's death, "once the date of internment for Rush is announced, we're going to be lowering the flags to half-staff." The pronouncement was met with applause from a mostly maskless audience.

DeSantis recounted on "Fox & Friends" on Thursday how Limbaugh had once asked him to appear on the show during a tough gubernatorial race. "I was getting the tar kicked out of me every day and he had me on the week before the election in 2018," DeSantis said, "He didn't have a lot of guests. I was honored to be on his show a couple of times."

The governor gushed, "He would have been great in radio even without the conservative thing. He's just that talented. Obviously, he was a conservative icon up there with Scalia, Reagan, and Buckley."

DeSantis also announced that he intends to strengthen Florida's electoral system by instituting a series of state-level policy changes, despite praising the fairness of 2020's election. "There's no state where your vote matters more than the state of Florida," DeSantis said. "There's no state with more voting transparency than the state of Florida."

For a remedy, DeSantis intends to put an end to ballot harvesting –– the practice of allowing third parties to collect voters' ballots and turn them into polling stations en masse. Critics have feared that the practice allows political operatives to tamper with votes, but proponents have said that it expands voting access to the elderly and disabled.

DeSantis also wants to ensure the mail-in-ballots are sent only by request. "We're not going to do mass mailing of ballots," DeSantis said. "It doesn't work. I think it creates a lot of hazards, a lot of problems."

In addition, the Florida governor hopes to increase the monitoring of ballot drop boxes, as well as improve real-time reporting at voting precincts. He also addressed the COVID-19 crisis, criticizing the supposed stringency of other state's lockdown measures. "This country needs to move forward," he said. "Florida has shown these lockdowns don't work."