Beyond Fox News or Trump, the GOP has a bone-deep antipathy to any collective attempt to extend a helping hand 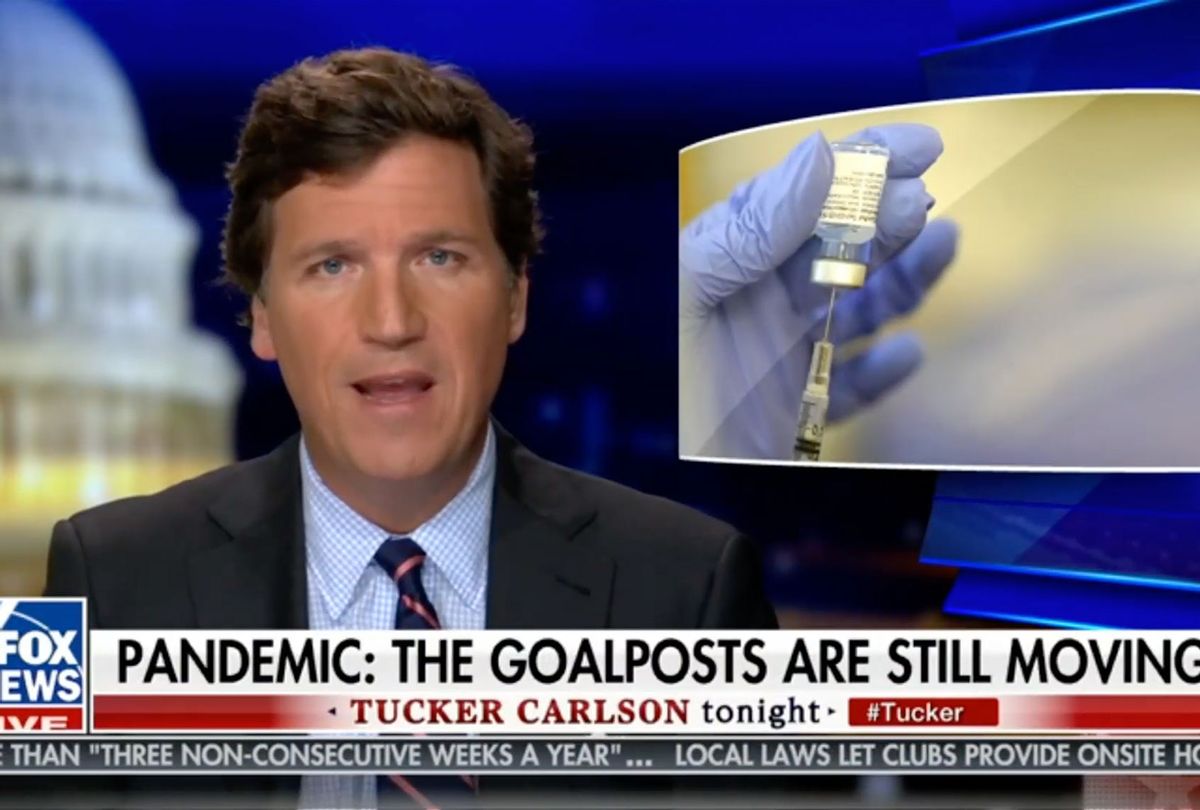 Tucker Carlson leaned into ant-vaxx rhetoric on his Fox News Tuesday night, saying that powerful people are “for certain” trying to deceive you about the COVID-19 vaccine. (FOX News)
--

One of the great challenges for public health officials during the COVID pandemic has been establishing trust among the public, particularly racial minorities who have a long history of both exploitation and neglect by the medical establishment and the government. In recent months there has been a lot of discussion about how to get past vaccine hesitancy in this population with efforts at outreach and communication aimed directly at these communities. And thank goodness, after all, Black and brown Americans have been hit the hardest of all demographic groups aside from elderly residents of nursing homes. There has been an unconscionable number of deaths and serious illnesses in these communities so it's vital to get them the latest information, delivered by trusted messengers, as well as easy access to the vaccines.

The good news is that the vaccination program is quickly picking up steam, with Black and Hispanic vaccine skepticism specifically falling substantially over the past few months. There, of course, must be continuing efforts to get the word out and get vaccines in some of the hard-to-reach areas to encourage even more participation, but it now appears that a new group has arisen as the real barrier to achieving herd immunity: white Republicans.

A study by the Kaiser Family Foundation found similar numbers.

From a Republican respondent asked "If there is one message or piece of information you could hear that would make you more likely to get vaccinated for COVID-19, what would it be?"

'Not sure there is anything that could be said. If it is proven effective and no side effects after a year or 2 of use I would no longer have concerns.'

Republicans who want to "wait and see" are less likely than others to say they will turn to the CDC or state and local health departments for information when making decisions about whether to get vaccinated for COVID-19.

The partisan gap among white people on vaccinations is simply astonishing. But then again we shouldn't be too surprised.

Some of this is simply reflexive loyalty to Donald Trump, who constantly "downplayed" the virus and consequently allowed it to run out of control on a level unmatched by any other developed country. But it isn't all Trump. Right-wing media must shoulder much of the responsibility for the growing anti-vaxxer attitude on the right.

This week we passed the grim milestone of 500,000 COVID deaths. A year ago, when the virus was first declared a global pandemic, such a number would have been unthinkable. Trump said at the time that he had it completely under control. Obviously, he didn't. It's one of the main reasons he lost the election and it was left to his successor to memorialize the dead on Monday.

Luckily, this is something that President Joe Biden is very good at. He held a somber ceremony at the White House which was carried live on the mainstream news networks and observed with appropriate gravity by nearly all who commented —except Fox News.

The hosts of Fox News followed up their coverage of the memorial with their same COVID disinformation they've fed their viewers from the beginning. And they did this even after issuing a statement the same day insisting that they have always given accurate scientific information during the crisis. As Media Matters reported, on the night that America observed the horror of half a million COVID deaths, Laura Ingraham was insulting the head scientist at the National Institute of Health, Dr. Francis Collins, as an "ancient medical bureaucrat with a fancy title spewing lies or unprovable accusations." Ingraham took issue with Collins calling masks a "life-saving medical device." She later featured former Trump adviser Dr. Scott Atlas, a man with no expertise in epidemiology, who agreed with her about the uselessness of masks.

Likewise, fellow Fox News primetime host Tucker Carlson snidely asserted that Americans are "not allowed" to ask questions about the vaccines and insisted that social distancing measures have resulted only in "traumatized citizens and destroyed lives." Sean Hannity spent the evening flogging the useless treatment pushed by Trump, Hydroxychloroquine, again. When Hannity tossed the show to Ingraham she declared, "when you look at the full, full picture on COVID there are going to be a lot of villains when the history is actually written on this." Hannity agreed, saying, "a lot of people were dead wrong and it hurt a lot of us."

I don't think it's going to go quite the way they think it will.

Watching Fox News, it's easy to see how so many Republicans are skeptical of the virus and the vaccines. If they've been listening to their leaders and conservative media, they have been hearing lies and propaganda. But the sad truth is that this is actually an old story that predates Trump and Fox News. There is something about health care to which the right-wing seems to be inherently hostile.

As this piece in the Economist lays out, going back to Ronald Reagan in the 1960s when he railed against Medicare and called any expansion of the program "socialized medicine" to his refusal to acknowledge the AIDS crisis as president, conservatives have consistently put up roadblocks to creating a decent health care system in the U.S. In the 1990s, former House speaker Newt Gingrich deep-sixed any hope of passing a health care plan under President Clinton but was actually in favor of a program similar to the one that was later adopted by Senator Mitt Romney, R-Ut, when he was governor of Massachusetts. That plan formed the basic template for what became Obamacare and we all know how the Republicans reacted to that, Newt Gingrich included.

It isn't just ideological resistance or a belief that it's economically unsound. It's not even simple partisanship. There's just a bone-deep antipathy to any collective attempt to extend a helping hand. I'm reminded of this awful scene from the town hall protests against Obamacare in 2010, which may illustrate what this is really all about:

That lack of empathy there says everything.

When the pandemic hit and state governments and public health officials tried to marshall the people to work together to prevent the spread of the disease, once again the right-wing inexplicably rose up in protest, some even storming their statehouses, carrying guns, demanding they be "freed" from any requirement to follow measures designed to save lives. Today, they make up the largest group of vaccine resisters which, like rejecting Obamacare, will end up hurting themselves the most.

Certainly, the economic hardship of the past year has taken a toll on many people and the frustration of business owners and workers is understandable. But refusing to wear a mask or take the vaccine has nothing to do with that. No, this attitude toward health issues in our culture is something that runs much deeper in the American right-wing. It's not ideology, it's pathology.