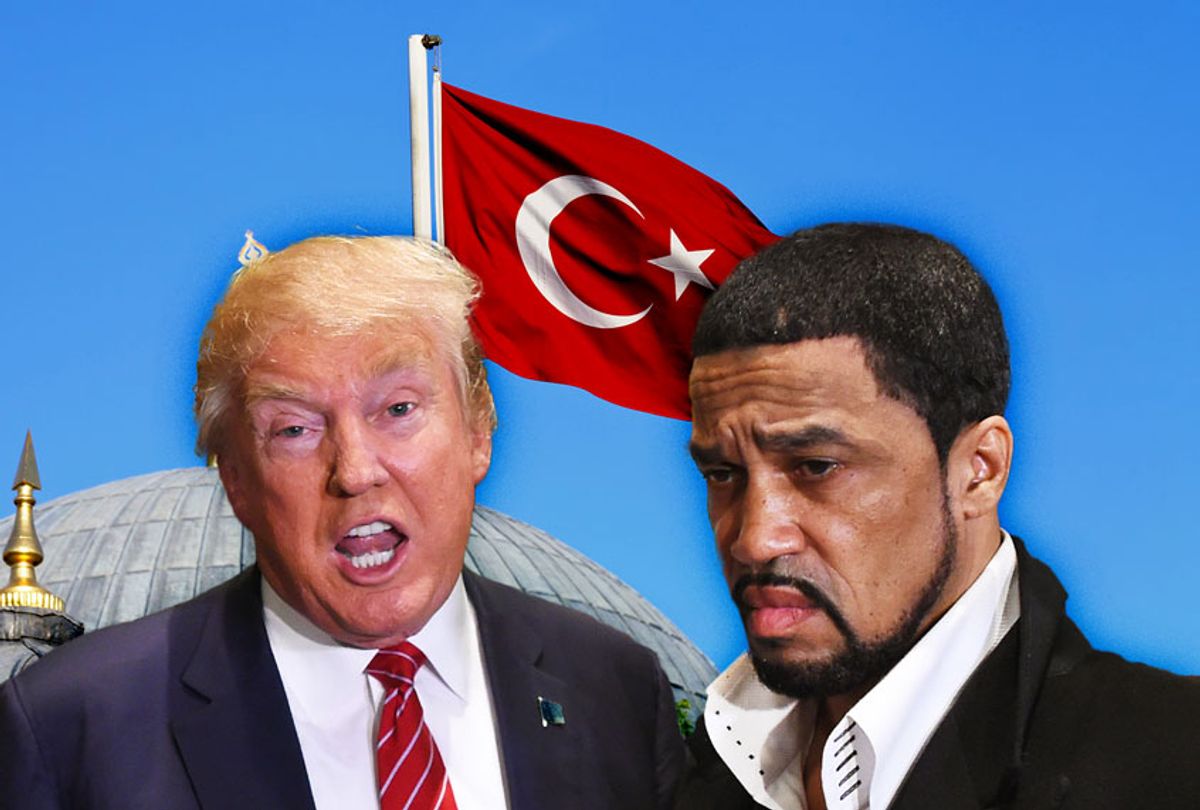 The FBI has opened an investigation into the activities of a pro-Trump group that appears to have engaged in an off-the-books foreign influence campaign and violated IRS rules regulating the political activity of nonprofit organizations, Salon has learned.

The probe's scope includes two officials affiliated with the Urban Revitalization Coalition, a now-defunct organization which made headlines last year with suspicious cash giveaways to Black voters and subsequently lost its tax-exempt charity status, a person familiar with the investigation told Salon. The two men — Kareem Lanier and Darrell Scott, a Cleveland-area pastor and former Trump campaign official — also used the URC as a vehicle to "solicit donations" from foreign nationals, including influential Turkish businessmen, while they worked with Trump administration officials to attract new investment in "Opportunity Zones," economically disadvantaged areas targeted for new incentives under the former president's 2017 tax bill.

Some of the solicitations were floated by former MAGA-world star Rabia Kazan, a Turkish author whom Scott and Lanier brought into the URC to facilitate such connections, according to Kazan and people with knowledge of the arrangement. Multiple people told Salon that the group had also approached Americans for donations in exchange for access to the Trump White House. Former Trump officials told Salon that such deals included tickets to a White House Easter Egg Roll, and that Scott was suspected of using his Cleveland church to funnel untraceable large-dollar contributions to Trump's inauguration.

The URC made headlines last February when it held campaign-adjacent events with cash giveaways for Black voters in underprivileged communities, including a $25,000 raffle — which the organization had promised the IRS it would not do. Politico described the raffles as part of a national strategy to hold events "in Black communities where they lavish praise on the president while handing out thousands of dollars in giveaways."

Government watchdog Citizens for Responsibility and Ethics in Washington raised concerns that the URC was in breach of IRS rules governing the group's capacity to participate in political activities. But because the URC never filed a tax return, neither the public nor the IRS have learned much about the group's fundraising and spending.

Scott, who advised Trump's 2016 and 2020 campaigns, presents himself as a Christian minister reformed from a life of drugs. During the 2020 election he co-chaired Black Voices for Trump, an official campaign arm formerly led by the late Herman Cain, and frequently identifies himself as "Dr. Scott," thanks to an honorary degree he received from the unaccredited St. Thomas Christian College in 2004. He founded the nondenominational New Spirit Revival Center, headquartered in a former Cleveland Heights synagogue. It has its own radio station.

Scott was often seen at the Trump White House, but told Salon he prided his independence from unenumerated encumbrances that would have accompanied an official administration title. He traveled on Air Force One with Trump a number of times, and watched the 2018 midterm returns with the former commander in chief at the White House. The surrogate is also close with former White House adviser Jared Kushner: Scott calls him "J-Rock," and the two worked closely to promote Opportunity Zones, a program that created capital gains tax incentives to spur investment in poor and minority communities, which eventually fizzled out.

The URC's efforts to make inroads with foreign investors dovetailed with the Trump administration's foreign policy goals of establishing a new overarching trade deal with Turkey. They also overlapped with Turkey's release of Andrew Brunson, an American pastor and political prisoner held by the government of President Recep Tayyip Erdogan. Texts from an Erdogan aide, obtained by Salon, describe the release as part of a "mutual" exchange connected to the 2018 midterm elections.

Legal experts told Salon that some of the above activities appear to violate rules governing U.S. tax and lobbying laws.

Kazan previously told Salon that Scott had a particular fascination with Turkey, and that she had connected him with multiple Turkish figures, including billionaire industrialist Mehmet Nazif Günal and Kazan's own sister, who had married into the Godiva chocolate business empire. Kazan said Scott and Günal had discussed millions of dollars in assets that Günal could no longer access in Saudi Arabia, and that Günal hoped that Scott could help convince Trump to lean on the Saudi king.

A group led by Scott tweeted in 2017 about Saudi Arabia's King Salman presenting Trump with the kingdom's highest honor.

Kazan also connected the URC officials with Turkish business representative Ali Akat, who made at least two visits to the U.S. in 2018, in April and November. Akat met with multiple congressmen and GOP operatives, and in April was escorted by Scott to the headquarters of the Republican National Committee and the Eisenhower Executive Office Building, home to offices of White House aides and staff, where they held a meeting, according to photos posted to social media.

In a phone interview, Scott did not deny or express surprise at the existence of a federal investigation into his group. ("FBI, CIA, KGB. They can all look into it, I don't care. Nothing there.") He also said that aside from Akat, he never met with any foreign investors. A passage from his book, "Nothing to Lose," published last summer, claims that the two men conceived of the URC specifically as a way to attract investors from overseas.

"As Kareem and I talked and strategized we concluded that since the money would come from foreign investors, we had to ensure before securing funding that the business would be done right," Scott wrote.

Though Scott denied meeting other foreign investors, and told Salon that he met "like 500 people a day" in Washington and could not be expected to remember everyone, when reminded of Günal, he immediately recalled a meeting over dinner in May 2018, during which he said the billionaire "was drunk." A few minutes prior to the phone conversation, Scott had sent Salon an email that read, in full: "I never had any dealings with Turks. It was a lie." Of his time with Akat, Scott said: "Nothing came of it. It turned out that he was just a con man."

Expatriate Turkish journalist and newspaper editor Abdulhamit Bilici previously told Salon in a call that "it's not possible Erdogan could not know" about Akat's interactions with the URC.

"Even the smallest details of these things wouldn't happen without his knowledge," Bilici said. "All businesses in the country, if allowed to operate, pay their dues to him, so to speak."

In addition to the meetings with Akat and Günal, Scott was apparently close with Turkish journalist Yavuz Atalay, chief White House correspondent for Aksam Gazette, a newspaper that supports Erdogan's government. Indeed, Atalay's most recent tweet, as of this writing, is a thank-you note to Scott for a signed copy of his book and "all other gifts."

Scott boasted multiple times on Twitter about meeting Akat. On April 25, 2018, he tweeted, "With some of my Business Homies, Ali and the guys, in DC at the Trump discussing bringing businesses to America! Great things are on the horizon! #urbanRevitalizationCoalition." Later that evening he tweeted, "With my guy Ali to discuss bring HUNDREDS of BUSINESSES to Urban America. Great things are on the horizon __#UtbanRevitalizationCoalition" [sic], and included a picture of himself with Akat at the Trump International Hotel in Washington.

The next day, Scott tweeted: "Finalizing plans to bring 30 billion dollars in investment along with 25,000 well paying manufacturing jobs to Urban America. Great things are on the horizon!!!!! #UrbanRevitalizationCoalition". He tagged all the tweets with the name of his nonprofit, whose mission, according to its website, was to "Revitalize America's Urban Communities!"

Two weeks later, and one day after a since-deleted article in the Turkish press quoted Akat about the visit — Scott tweeted, "Myself and @realkareemdream have been negotiating with foreign investors about potentially pouring billions of dollars into Opportunity Zones in Urban Communities all across the country. Great things are on the horizon! ##UrbanRevitalizationCoalition."

Scott engaged with a reply to that tweet reading: "Talk with the Saudis. They like us now!"

"They're on our radar screen!" Scott wrote.

That same day, Lanier quoted Scott's "foreign investors" tweet, commenting: "Huge Announcement(s) Coming Soon Urban America! @realDonaldTrump & @PastorDScott and many others are fighting everyday for all in our great country!!! @CNN and @MSNBC will be forced to eat their words and report "Real News" for a change. Hahaha!!!#BillionsontopofBillions"

Scott has also deleted his end of a Twitter conversation in which he debated the value of foreign investments.

The "huge announcement," however, appears not to have come to pass. The Trump administration never struck a large-scale trade deal with Turkey, and intergovernmental communications quickly fell apart that summer in the spat over Brunson's release.

In a taped phone conversation in Turkish, which Salon obtained and had independently translated three times, Akat acknowledges that Scott and Lanier had asked him for financial "donations." Akat says that when he declined, the men "pressured" him to remove the photos of their meetings published on his social media accounts and in Turkish media. Kazan told Salon that Scott and Lanier also asked that she delete her own social media photos documenting the visit.

Scott told Salon that their request to have photos deleted was not out of the ordinary.

"If I introduce you to a Black dude, and you take a picture with him, and then you find out he's a drug dealer, wouldn't you want to tell him to take that picture down?" he asked. Scott himself used to sell drugs. Akat is the president of the Turkish American Business Association and the Turkish-American Chamber of Commerce.

Following the meetings with Akat, Scott and Lanier brought Kazan on board to the URC. Kazan says that the men were using her entirely for her connections to Turkey.

Experts tell Salon that, by all appearances, the URC was engaged in lobbying efforts on behalf of foreign interests — which would legally require it to register with the U.S. government as a foreign agent.

It is unclear whether the URC maintained communications with Akat and Günal. Scott denied having spoken again with the men, but said he could not remember if they had exchanged emails or text messages.

In an interview with the Daily Sabah — a pro-government Turkish newspaper — given a month before his first U.S. visit, Akat said that he planned to meet with U.S. government officials in hopes of establishing a "Turkish organized industrial zone" in a number of American states. In a later interview with the outlet, following Akat's November trip to Washington, during which he stayed at the Trump Hotel and received gifts from the White House, he boasted of a major trade deal ahead. The businessman pointed to Godiva Chocolatier, a largely Turkish-owned company, as particularly promising, since Americans were unlikely to perceive Godiva as a foreign brand.

The goal, according to Akat, was to round up Turkish companies who would promise a $1 million up-front investment. These companies would then get first crack at manufacturing opportunities in certain American markets. It is unclear whether Akat met with Scott and Lanier on that second trip, and unclear why trade talks later fell through.

In a since-deleted Facebook post during Akat's April 2018 trip, Republican strategist and XStrategies CEO Alexander Bruesewitz said he and Akat discussed Godiva at the then-president's hotel, mentioning Turkey's "desire to invest $12B in the US" and create 25,000 jobs.

Despite Scott's tweets, however, he says he lost interest in Akat within days.

"A lot of people like to talk a lot of shit, but when it comes time to put up or shut up, more often than not they shut up," he said.