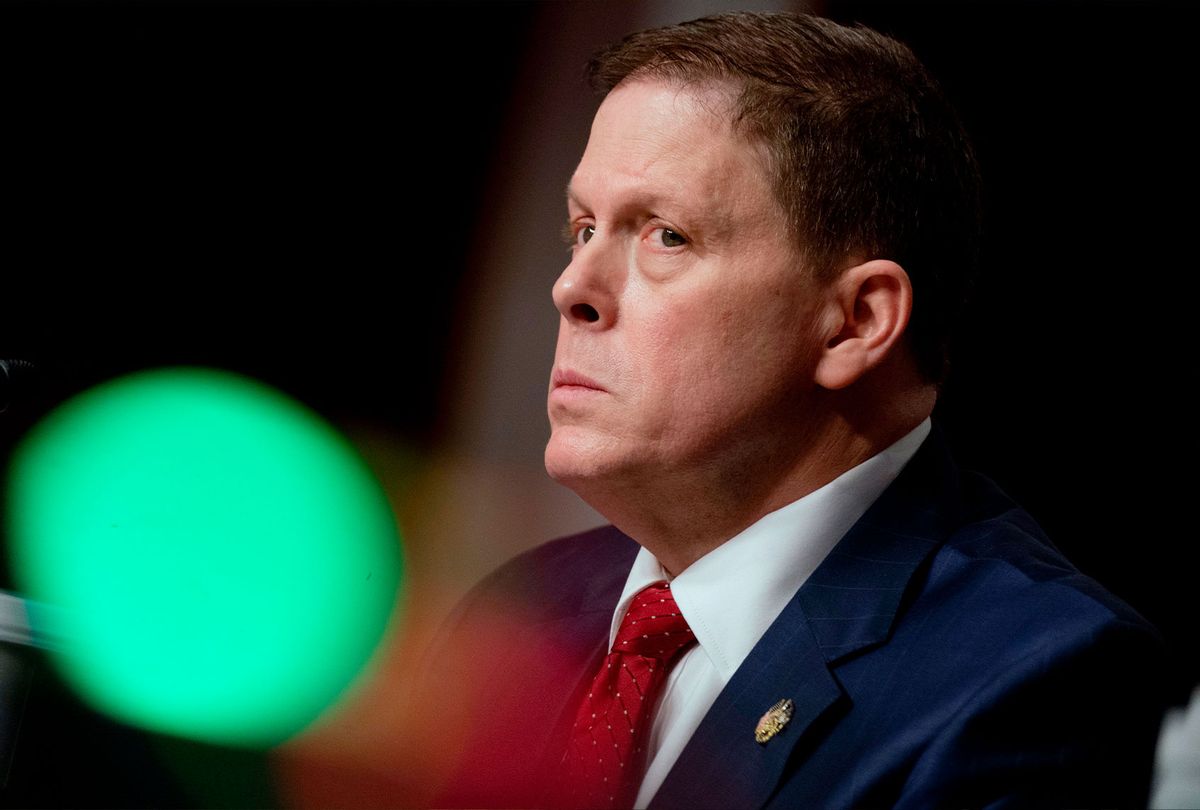 Former top U.S. Capitol security officials blamed intelligence failures and each other for the deadly Jan. 6 riot in a Senate hearing on Tuesday.

Former Capitol Police Chief Steven Sund, who resigned after the riot, testified at a joint committee hearing that intelligence the department received from federal law enforcement and Washington, D.C., police suggested that the threat of violence on Jan. 6 was "remote" or "improbable."

"Without the intelligence to properly prepare, the USCP was significantly outnumbered and left to defend the Capitol against an extremely violent mob," he said.

But the FBI had indeed warned of potential violence the day before the attack in a memo that Sund said he had not seen until this week.

"This is a report that I am just learning about within the last [24 hours], they informed me yesterday of the report," he said.

The FBI field office in Norfolk, Virginia, issued a threat report to the Capitol Police and D.C. Metropolitan Police on Jan. 5, warning that extremists heading to the city were prepared for "war."

Former Senate Sergeant at Arms Michael Stenger and former House Sergeant at Arms Paul Irving, both of whom also resigned after the attack, said they were unaware of the warning ahead of the riot. Acting D.C. Police Chief Robert Contee told the senators that he never saw the memo, which had not been "fully vetted," before the attack.

"What the FBI sent, ma'am, on Jan. 5 was in the form of an email," Contee said. "I would certainly think that something as violent as an insurrection at the Capitol would warrant a phone call or something."

Sund agreed that intelligence suggesting a "coordinated attack" would have been "extremely helpful."

"That type of information could have given us sufficient, advance warning to prep, plan for an attack such as what we saw," he said.

The memo, which was obtained last month by The Washington Post, showed that extremists planned to meet in states like Kentucky, Pennsylvania, and South Carolina before heading to Washington.

"An online thread discussed specific calls for violence to include stating 'Be ready to fight. Congress needs to hear glass breaking, doors being kicked in, and blood from their BLM and Pantifa slave soldiers being spilled. Get violent. Stop calling this a march, or rally, or a protest. Go there ready for war. We get our President or we die. NOTHING else will achieve this goal," the document said.

Steven D'Antuono, the head of the FBI Washington field office, told reporters after the attack that the memo was shared with all law enforcement partners, including Capitol Police and D.C. police, but Sund testified on Tuesday that the warning never made its way up the chain of command. D'Antuono said last month that the intelligence was not actionable and that the FBI did not believe there would be anything more than a lawful demonstration.

Numerous news outlets have noted for weeks, however, that rioters openly planned the attack in public view on social networks. Some Capitol Hill staffers were warned not to come in to work on Jan. 6 because of the threat posed by the planned protest, according to the Post.

The Jan. 5 memo came just two days after an internal Capitol Police intelligence report obtained by the Post last month warned of potential violence that could target "Congress itself."

"Unlike previous post-election protests, the targets of the pro-Trump supporters are not necessarily the counter-protesters as they were previously, but rather Congress itself is the target on the 6th," the report said, noting that some organizers were urging Trump supporters to arm themselves with weapons and combat gear and that the rally was "promoted by President Trump himself."

"The Stop the Steal protest in particular does not have a permit, but several high profile speakers, including Members of Congress are expected to speak at the event," the document said. "This combined with Stop the Steal's propensity to attract white supremacists, militia members and others who actively promote violence, may lead to a significantly dangerous situation for law enforcement and the general public alike."

Sund previously told reporters that he had asked Irving and Stenger for permission to put the National Guard on standby but said they refused, fearing the "optics" of having troops around the Capitol, and suggested he informally ask the National Guard to be on alert. But on Tuesday all three men maintained that intelligence did not suggest that the Jan. 6 protest would be markedly different from previous pro-Trump or left-wing protests in the city.

"There were clearly intelligence issues with information that was out there that didn't get to the right people, actions that weren't taken," Senate Rules Committee Chairwoman Amy Klobuchar, D-Minn., told reporters on Tuesday.

"The federal government must start taking these online threats seriously to ensure they don't cross into real-world violence," he said.

The officials who testified Tuesday also discussed the delay in the National Guard's response, though they contradicted each others' timelines.

Sund testified that he called Irving at 1:09 p.m. to request National Guard assistance. Irving denied Sund's claim and said he had no recollection or record of a call from Sund until after 2 p.m., at which point he and Stenger requested National Guard help. The Pentagon has said that it received at least three phone calls between 1:26 p.m. and 2:26 p.m. from Capitol Police, D.C. police and Washington Mayor Muriel Bowser requesting National Guard assistance, but the decision to send in the National Guard did not come until 3 p.m. Troops did not actually arrive until 5:40 p.m., by which time police had already quelled the chaos.

Contee said that he was on a call with Sund and Pentagon leaders at 2:22 p.m. and was "stunned at the response from Department of the Army, which was reluctant to send the D.C. National Guard to the Capitol."

"While I certainly understand the importance of both planning and public perception — the factors cited by the staff on the call — these issues become secondary when you are watching your employees, vastly outnumbered by a mob, being physically assaulted," he said. "I was able to quickly deploy MPD and issue directives to them while they were in the field, and I was honestly shocked that the National Guard could not — or would not — do the same."

Sund said that Army Lt. Gen. Walter Piatt pushed back on the request because he didn't like  "the visual of the National Guard standing a line with the Capitol in the background" and troops ultimately did not arrive until "4.5 hours after I first requested them and 3.5 hours after my request was approved by the Capitol Police Board."

Sund blamed Irving and Stenger for slowing the response.

"Irving stated that he was concerned about the 'optics' of having National Guard present and didn't feel that the intelligence supported it," he said, adding that Stenger also did not approve the request for National Guard assistance ahead of the riot and instead "suggested I ask them how quickly we could get support if needed and to 'lean forward' in case we had to request assistance."

"I notified the two sergeants-at-arms by 1:09 p.m. that I urgently needed support and asked them to declare a state of emergency and authorize the National Guard," Sund said. "I was advised by Mr. Irving that he needed to run it up the chain of command. I continued to follow up with Mr. Irving, who was with Mr. Stenger at the time, and he advised that he was waiting to hear back from congressional leadership but expected authorization at any moment."

Irving denied that the conversation had ever happened, and also that he waited for authorization from congressional leaders or was particularly concerned about "optics."

"That is categorically false," Irving said. "'Optics,' as portrayed in the media, did not determine our security posture. Safety was always paramount when evaluating security for Jan. 6. We did discuss whether the intelligence warranted having troops at the Capitol, and our collective judgment at that time was no, the intelligence did not warrant that."

The former security officials also took issue with the assessment from retired Army Lt. Gen. Russel Honoré, who was tapped by House Speaker Nancy Pelosi, D-Calif., to review the security failure at the Capitol. Honoré said that Capitol officers "were doing their job" during the mayhem but suggested that Capitol Police leaders may have been "complicit" in the attack.

"I've just never seen so much incompetence, so they're either that stupid, or ignorant or complicit," Honoré said last week.

The Tuesday hearing did not focus at all on recent reports that six Capitol officers have been suspended and 29 others are under investigation for their actions related to the Jan. 6 riot.

"Even our best efforts were not enough to stop this unprecedented assault on the Capitol," Sund testified. "However, casting blame solely on the United States Capitol Police leadership is not only misplaced, but it also minimizes what truly occurred that day. The focus going forward needs to be on the efforts to improve intelligence and the coordination of security measures between all involved agencies."

The officials also pushed back on claims by Republicans and conservative media hosts like Fox News' Tucker Carlson, who falsely argued on Monday that "there is no evidence that white supremacists were responsible for what happened on January 6. That's a lie."

All four officials who testified on Tuesday said that white supremacists and extremist groups were involved in the attack.

Capitol Police Captain Carneysha Mendoza noted to the committees before the officials' testimony that "multiple white supremacist groups, including the Proud Boys and others" had come to Washington for previous rallies after the election. Members of the Proud Boys and Oath Keepers, some of whom now face conspiracy charges, can clearly be seen in numerous videos leading the assault on the Capitol.

Mendoza said that the Jan. 6 riot was "by far the worst of the worst" that she had seen in her 19-year career and argued that even if there were 10 times as many officers "this battle would have been just as devastating."

"At some point, my right arm got wedged between the rioters and railing along the wall. A CDU sergeant pulled my arm free and had he not, I'm certain it would have been broken," said Mendoza, an Army veteran. "I proceeded to the Rotunda, where I noticed a heavy smoke-like residue and smelled what I believed to be military-grade CS gas — a familiar smell. It was mixed with fire extinguisher spray deployed by the rioters. The rioters continued to deploy CS inside the rotunda. I received chemical burns to my face that still have not healed to this day."