Why didn't Capitol Police leaders take the threat seriously? The answer is obvious, but media won't say so 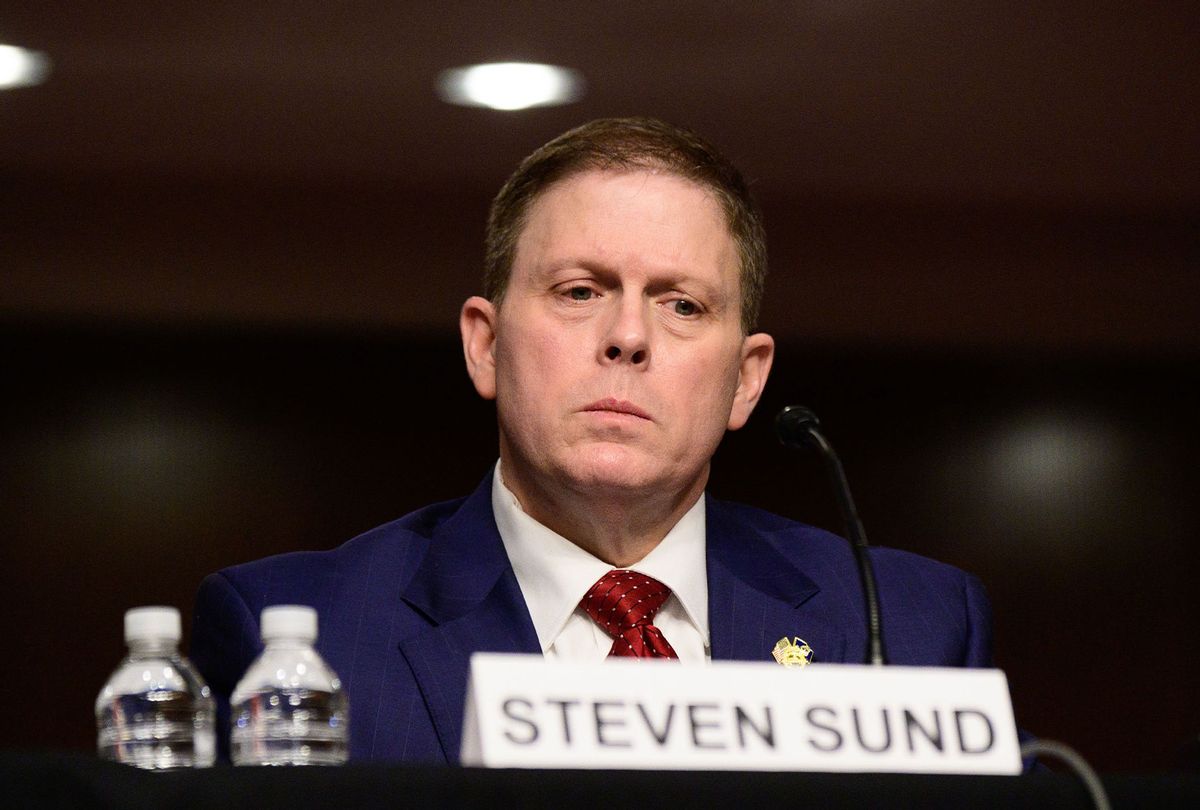 Steven Sund, the disgraced former chief of the U.S. Capitol Police Department, was explicitly warned in a Jan. 3 memo from his own intelligence unit that thousands of desperate, violence-prone Trump supporters were planning to target Congress on Jan. 6, encouraged by the president himself.

The memo didn't really say much more than was already obvious to anyone paying attention, but it was authoritative, detailed and, of course, prescient.

Sund waved it off. He didn't bother to share it with the rank and file. He didn't equip his frontline officers with tear gas, or other non-lethal crowd-control weapons, or riot gear. Instead, he sent them out in street uniforms to man barricades made of bike racks, and get the shit beaten out of them. One officer died, and many others were injured. He let the Capitol fall to a mob.

But in his first public comments on Tuesday, Sund had the breathtaking gall to blame the breach of the Capitol not on his own poor decision-making, but on a "clear lack of accurate and complete intelligence across several federal agencies."

And the pathetic, credulous, ill-informed senators to whom he was testifying lapped it up.

They focused relentlessly on one minor data point — a Jan. 5 report from the FBI's Norfolk field office, which described a single thread from a message board that called for war and included a map of the Capitol's tunnels.

The report's existence was disclosed by the Washington Post on Jan. 12, and the story made a huge splash because it was the first public evidence that the Capitol Police had in fact been forewarned.

But three days later, the Post published the real bombshell: a story about that Jan. 3 memo.

The Jan. 5 FBI report was shared with the Capitol Police intelligence unit. Sund said he didn't get it, however, and under leading questioning from Sen. Jeff Merkley, D-Ore., blamed the unit's director, John Donahue, for that failure.

This one incident, arguably of no real significance, led senator after senator to express grave concern about what Sen. Gary Peters, D-Mich., called "colossal breakdowns" in intelligence gathering and intelligence sharing.

Sund's story is that because of flawed intelligence, he judged the danger posed by the Jan. 6 protests as similar in scale to that posed by previous pro-Trump rallies nearby, none of which amounted to much.

But take a few moments to read this one "redacted" excerpt from the internal Jan. 3 memo that the Post made public. Sund's excuses fall apart. (The public really needs to see the full, unredacted memo, by the way.)

Due to the tense political environment following the 2020 election, the threat of disruptive actions or violence cannot be ruled out. Supporters of the current president see January 6, 2021, as the last opportunity to overturn the results of the presidential election. This sense of desperation and disappointment may lead to more of an incentive to become violent. Unlike previous post-election protests, the targets of the pro-Trump supporters are not necessarily the counter-protesters as they were previously, but rather Congress itself is the target on the 6th. As outlined above, there has been a worrisome call for protesters to come to these events armed and there is the possibility that protesters may be inclined to become violent. Further, unlike the events on November 14, 2020, and December 12, 2020, there are several more protests scheduled on January 6, 2021, and the majority of them will be on Capitol grounds. The two protests expected to [be] the largest of the day — the Women for American First protest on the Ellipse and the Stop the Steal protest in Areas 8 and 9 — may draw thousands of participants and both have been promoted by President Trump himself. The Stop the Steal protest in particular does not have a permit, but several high profile speakers, including Members of Congress are expected to speak at the event. This combined with Stop the Steal's propensity to attract white supremacists, militia members, and others who actively promote violence, may lead to significantly dangerous situations for law enforcement and the general public alike.

Imagine reading that memo and failing to put your own officers on red alert; failing to prepare them to repel what seemed like an inevitable onslaught.

The closest any senator came to asking about that was Sen. Patrick Leahy, D-Vt. "It's not that we had inadequate resources, but a failure to deploy the people that we were supposed to," he told Sund. He noted that Sund had in a previous letter acknowledged knowing that white supremacist groups and other extremist groups were expected on Jan. 6 and might become violent.

"I really wonder why we didn't take them seriously enough to be prepared for them," Leahy said. "You said there wasn't enough intelligence," he said. "How much more intelligence do you need than that?"

The point is that something else was clearly going on in Sund's head to reduce his sense of alarm. And if you think about it for just an instant, you know exactly what it was.

As newly-elected Rep. Cori Bush, D-Mo. — a veteran of many Black Lives Matter protests — put it on MSNBC the very evening of the insurrection: "Had it been people who look like me, had it been the same amount of people, but had they been Black and brown, we wouldn't have made it up those steps. … We would have been shot, we would have been tear-gassed."

The reporting on this element of the story — why Sund and the House and Senate sergeants at arms, also older white men, weren't particularly alarmed by the MAGA horde — has been terrible. Nearly nonexistent.

The one exception has been an article by Joaquin Sapien and Joshua Kaplan for ProPublica, based on interviews with 19 current and former U.S. Capitol Police officers. They reported:

The interviews …  revealed officers' concerns about disparities in the way the force prepared for Black Lives Matter demonstrations versus the pro-Trump protests on Jan. 6. Officers said the Capitol Police force usually plans intensively for protests, even if they are deemed unlikely to grow violent. Officers said they spent weeks working 12- or 16-hour days, poised to fight off a riot, after George Floyd was killed by Minneapolis police — even though intelligence suggested there was not much danger from protesters.

"We had intel that nothing was going to happen — literally nothing," said one former official with direct knowledge of planning for the Black Lives Matter demonstrations. "The response was, 'We don't trust the intel.'"

By contrast, for much of the force, Jan. 6 began like any other day.

"We normally have pretty good information regarding where these people are and how far they are from the Capitol," said Keith McFaden, a former Capitol Police officer and union leader who retired from the force following the riot. "We heard nothing that day."

But nobody at the Senate hearing even mentioned the issue of race. Not once.

Indeed, the only mention of possible complicity came when right-wing Sen. Josh Hawley, R-Mo., lashed out at House Speaker Nancy Pelosi's choice of retired Lt. General Russel Honoré to lead a review of Capitol security. A day after the ransacking of the Capitol, Honoré told a TV station what a lot of people were thinking: "We knew they were coming; everybody knew they were coming," he said. "I've just never seen so much incompetence, so they're either that stupid, or ignorant or complicit. I think they were complicit".

Reporters from alternative media expressed some skepticism about the hearing and the senator's questions. Daily Beast reporter Spencer Ackerman noted:

But the mainstream media was typically disappointing.

The lack of intelligent, appropriately skeptical reporting on the Capitol Police's failure of preparedness has been absolutely shocking. It was shocking to me on Jan. 15. It's still shocking six weeks later.

And now, reporters, like the senators, have focused on that one FBI report, and on Sund's excuse that he didn't have specific intelligence of a coordinated attack.

NBC reporter Ken Dilanian likened it to the 9/11 intelligence failures:

Faulty intelligence was to blame for the outmanned Capitol defenders' failure to anticipate the violent mob that invaded the iconic building and halted certification of the presidential election on Jan. 6, the officials who were in charge of security declared Tuesday in their first public testimony on the insurrection.

An FBI warning of potential violence reached the U.S. Capitol Police on the eve of the Jan. 6 attack, but top leaders testified during a Senate hearing Tuesday that they did not see it.

But everyone paying attention at the time realized the Capitol was going to be the target on Jan. 6. And while in retrospect it all seems inevitable now, this momentous event in our history could very likely have been nipped in the bud by better preparation. Tear gas is very effective.

Similarly, while some of the insurrectionists were clearly coordinated, there is still no evidence that this wasn't at heart, at least for some of them, a crime of opportunity: The hordes arrived at the Capitol, screaming mad, and — amazingly enough — were able to get in. While some appeared to be looking for victims, some of them simply wandered around taking selfies. Could they really have expected the Capitol to fall so easily?

The Washington press corps has finally found the courage to call out some lies: That the election was stolen; that the Jan. 6 insurrection was staged by antifa. Clearly, their bosses have given them the OK to call those out.

But when it comes to the regular business of Washington — particularly if there's a whiff of racism behind the lies — it's back to stenography.

At the very end of the hearing, Senate Rules Committee Chair Amy Klobuchar — did someone on her staff read my tweets? — finally mentioned that Jan. 3 report. She said it "contained ... some pretty foreboding details that I would have thought would have resulted in planning and more preparation."