“Unconscionable”: Texas energy companies spark new round of outrage by price-gouging in an emergency 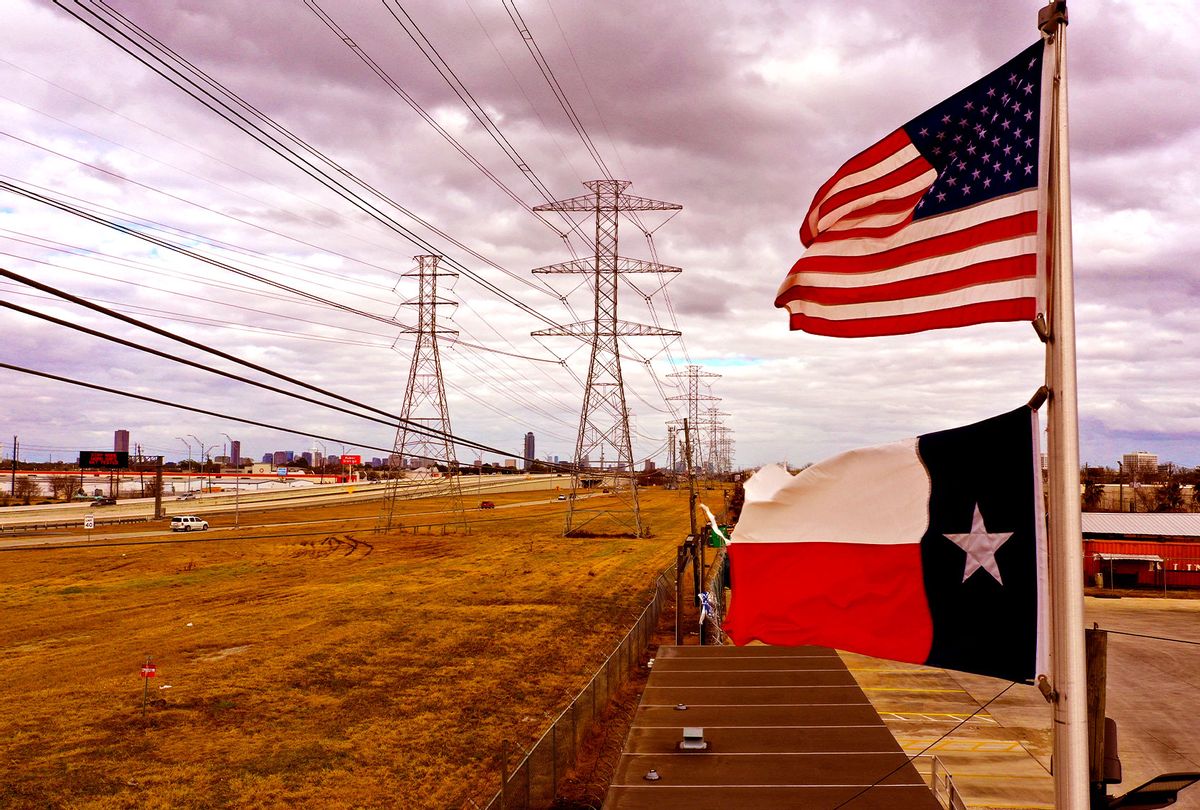 The U.S. and Texas flags fly in front of high voltage transmission towers on February 21, 2021 in Houston, Texas. Millions of Texans lost power when winter storm Uri hit the state and knocked out coal, natural gas and nuclear plants that were unprepared for the freezing temperatures brought on by the storm. Wind turbines that provide an estimated 24 percent of energy to the state became inoperable when they froze. (Justin Sullivan/Getty Images)
--

As the winter storm in Texas still leaves thousands without power, Texans are reporting that the cost of their utility bills has skyrocketed, with some bills in the thousands for just one week of power.

"The average price for electricity in Texas in the winter is about 12 cents per kilowatt-hour, according to the U.S. Energy Information Administration," NPR reported. "Texas utility regulators allowed that price to rise to $9 per kilowatt-hour."

Those most affected by the price hikes are on "variable-rate power plans," which gives energy companies the discretion to change the price depending on consumer demand. Generally, when demand increases, the price does too. Variable-rate plans are particularly desirable during periods of low energy usage (i.e. normal weather conditions) because customers get to pay at a discounted rate. However, when the devastating winter storm hit Texas, leaving millions without water and heat, those discounted rates went out the window.

Many utility companies have already begun the process of damage control. Last week, CPS Energy ("the nation's largest municipally-owned gas and electric utility") told customers that, while it is "unacceptable to have customers bears the costs on their monthly bill," it was "working diligently to find ways to spread those costs to 10 years or longer to make it more affordable."

Wholesale electricity retailer Griddy –– now being sued by a Chambers County resident for $1 billion –– remarkably insisted that its customers switch electricity providers before they might be affected by the price spikes. However, switching providers can take days, making it too late for customers to skirt around the bills.

Scott Willoughby, a 63-year-old veteran on Social Security told The New York Times that Griddy had charged him $16,752 for the month of February. "There's nothing I can do about it," Willoughby said, "But it's broken me."

Griddy wrote in a blog post last Thursday, "We intend to fight this for, and alongside, our customers for equity and accountability – to reveal why such price increases were allowed to happen as millions of Texans went without power,"

On Sunday, the Texas Public Utility Commission implemented two orders: to halt power disconnections due to non-payments and discontinue sending monthly estimates to customers. However, it should be noted that the commission gave the Electric Reliability Council of Texas (ERCOT) –– which oversees the majority of Texas' power grid –– the go-ahead to increase prices due to a bottleneck in supply.

Texas Gov. Greg Abbot –– who erroneously attributed green energy to the sweeping outages –– has called for an investigation into ERCOT, five of whose board members announced they would resign on Wednesday. "We have a responsibility to protect Texans from spikes in their energy bills that are a result of the severe winter weather and power outages," Abbot said on Saturday during an emergency meeting. Texans, however, are demanding that concrete action be taken.

"The state government is gonna have to step in and basically hold people harmless—in other words, make sure that those exorbitant costs are not passed onto the customer here," said Rep. Joaquin Castro, D-Texas. "And I think they're gonna see that there's gonna be a movement throughout Texas of people who are liberal and conservative and across the political spectrum who are refusing to pay $2,000 when for two days they didn't even get power, and they're not even responsible for the poor planning that went on by state leaders."

Other officials echoed Castro's concerns, emphasizing that customers should not bear the brunt of the financial cost when so many of them are already in vulnerable positions during the storm.

San Antonio Mayor Ron Nirenberg told CNN on Sunday that "it would be unconscionable for bills to go up and for bills to be put on the backs of residents of the state that have been suffering and freezing their homes for the last week, through no fault of their own."

Although it's clear that Texas' energy crisis was primarily brought on by a wildly unregulated energy market, Republicans have nevertheless continued to blame green energy solutions. "Where is the story about the $2B "green" bio plant the City of Austin funded — that didn't produce 5 minutes of energy while Austin residents were without power for days?" tweeted Rep. Jared Patterson, R-Tex. "Doesn't much of the staff for @TexasTribune live in Austin? That's a layup."