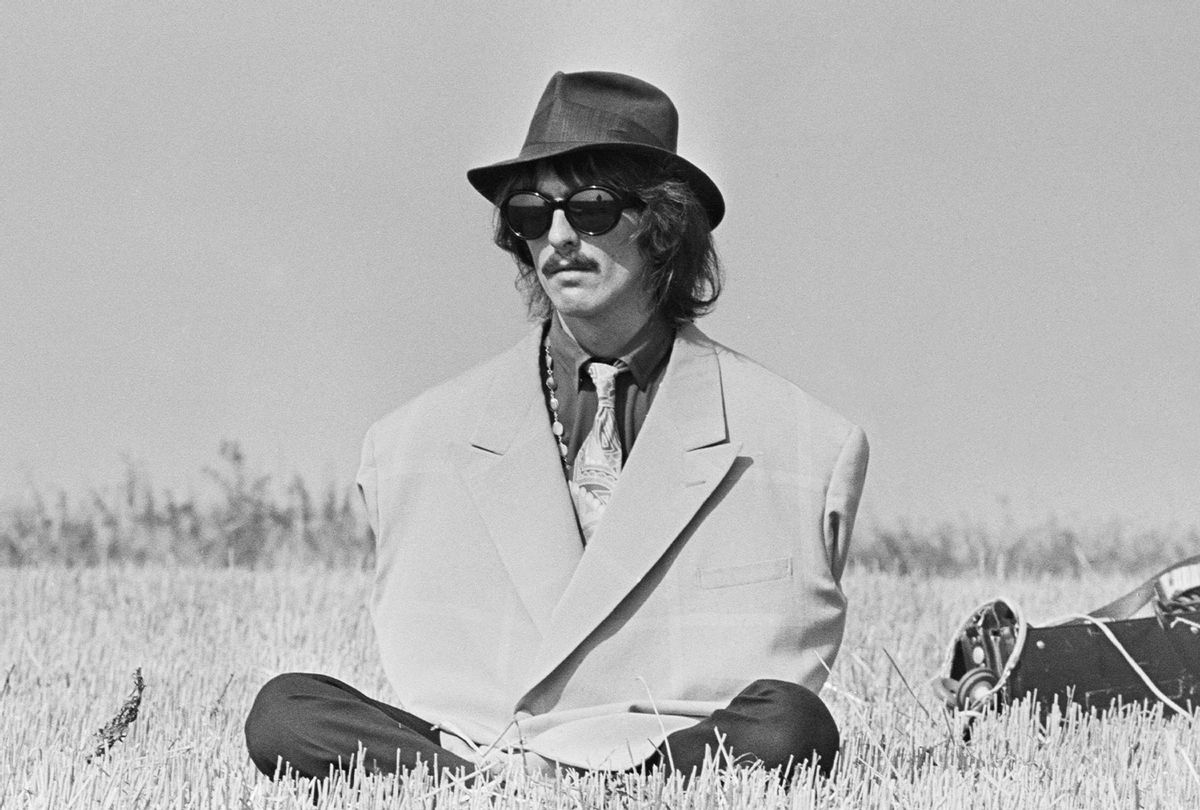 George Harrison (1943-2001), guitarist with the Beatles, pictured wearing an oversized jacket and a trilby hat during filming of 'Magical Mystery Tour' in a field near Newquay in Cornwall on 14th September 1967. (Chapman/Daily Express/Hulton Archive/Getty Images)
--

Today, we celebrate what would have been George Harrison's 78th birthday. When it comes to such milestones, the mind easily wanders in the direction of other, less sanguine anniversaries. Incredibly, it has already been more than four decades, for instance, since December 8, 1980, the last day that all four Beatles walked the earth. And when it comes to George in particular, nearly two decades have elapsed since his untimely death in November 2001 at age 58.

In sharp contrast with Lennon's shocking murder in 1980, Harrison's passing could be considered less wrenching. In the late 1990s, he had undergone radiotherapy during a bout with throat cancer. While he had seemed to have beaten the disease at the time, reports began to circulate in the summer of 2001 that his recent medical condition was not merely serious, but dire, as a struggle with lung cancer had spread to his brain.

In short, the prevailing conditions allowed us to mourn Harrison's loss in a much different fashion than Lennon's, which had been sudden and devastating. In the years since Harrison's death, attention has been showered on the musician's lifelong journey towards spiritual enlightenment. It was a progress that had begun even before young George had fallen hopelessly in love with music.

As Harrison later recalled during the Beatles' "Anthology" project, his earliest memories were about spiritual matters. Even as a preteen, he had developed a fascination with the strange intermingling of commerce and religion—and, ultimately, vice—that he observed in the neighborhood around his family's Liverpool home. Growing up in the city's Speke district, George remembered that "priests used to come round to all the houses in the neighborhood collecting money." What really troubled young George was that his father's hard-earned money went towards the construction of yet another cathedral ("The Beatles Anthology," p. 26).

"Before that," George reflected, "there was a temporary church in a big wooden hut. It had the stations of the cross around it, and that's my earliest remembrance of wondering, 'What is all this about?' Okay, I could see Christ dragging his cross down the street with everybody spitting on him, and I got the gist of that; but it didn't seem to make any sense. I felt then that there was some hypocrisy going on, even though I was only about 11-years-old" ("The Beatles Anthology," p. 26).

Even at that tender age, George recognized that "it seemed to be the same on every housing estate in English cities: on one corner they'd have a church and on the other corner a pub. Everybody's out there getting pissed and then just goes in the church, says three 'Hail Marys' and one 'Our Father' and sticks a fiver in the plate. It felt so alien to me. Not the stained-glass window or the pictures of Christ; I liked that a lot, and the smell of the incense and the candles. I just didn't like the bullshit. After Communion, I was supposed to have Confirmation, but I thought, 'I'm not going to bother with that, I'll just confirm it later myself'" ("The Beatles Anthology," p. 26).

And for nearly the balance of the rest of his life, George did exactly that. Indeed, his spiritual quest would become a key factor in the Beatles' creative inspiration and musical direction. As with so many of his later moments of intellectual recognition, George didn't look back after his epiphany regarding the hypocritical relationship that existed between churchgoing and drinking. "From then on," he recalled, "I avoided the church, but every Thursday a kid would come round to herald the arrival of the priest. They'd go round all the streets, knock on the door and shout, 'The priest's coming!' And we'd all go, 'Oh, shit,' and run like hell up the stairs and hide. My mother would have to open the door, and he'd say, 'Ah, hello, Mrs. Harrison, it's nice to see you again, so it is. Eh, be Jesus.' She'd stuff two half-crowns in his sweaty little hand and off he'd go to build another church or pub" ("The Beatles Anthology," p. 26).

It was in 1965, while working on the set of the Beatles' "Help!" feature film, that Harrison first came into the orbit of the sitar. After listening to the work of Ravi Shankar, the renowned Bengali-Indian virtuoso, George was hooked: "I had bought a very cheap sitar in a shop called India Craft in London, and it fitted on to the song ['Norwegian Wood'] and it gave it that little extra thing. Even though the sound of the sitar was bad, they were still quite happy with it. At the same time as I played the sitar, very badly, on the Beatles' record, I began to hear Ravi Shankar's name. The third time, I thought, 'This is an odd coincidence.' I went out and bought some of Ravi's records, put them on, listened to them and it hit a certain spot in me that I can't explain, but it seemed familiar to me. The only way that I can describe it was my intellect didn't know what was going on and yet this other part of me identified with it. It just called on me'" (Keith Badman, "The Beatles Off the Record," p. 190).

For George, meeting Shankar would ignite one of the most important associations of his lifetime. In many ways, Shankar acted as the Beatle's "spirit guide," in the words of Graeme Thomson. George's budding interest in Eastern music and religion occasioned a reconsideration of spirituality and religion. By 1966, George had found himself in the throes of "confirming things for himself" as he had predicted all those years ago: "Nobody I know in the Christian religions seems to have a deep enough understanding of the science of God to be able to translate it into human terms. Church leaders are purveying a kind of nonsense because they don't really understand it themselves. So they blind you with ignorance, like a government does, as if the power of the Church has become reason enough for you not to question anything it says. It's like, 'You don't know anything about Christ and God because we're the ones who own the franchise'" (Thomson, "George Harrison," p. 11).

Through Shankar, George began to steep himself in the literature of Eastern religion and philosophy. These readings had, in short, changed his way of seeing the world and notions of spiritual transcendence. "I had read enough from the Vivekenandas and Yoganandas," George later recalled, "to comprehend how to see God: by using the Yogic system of transcending through the relative states of consciousness (waking, sleeping, dreaming) to get to the most subtle level of pure consciousness. It is in that level that the individual experiences pure awareness, pure consciousness, the source of all being. Everything in creation is the effect of that pure state of being, the transcendent or the God. God is the cause. And the effect is all three worlds: the causal, the astral and the physical. I believe absolutely in the power of prayer, but it's like love: people say 'I love you,' but it's a question of 'how deep is your love?'" ("The Beatles Anthology," p. 263).

Harrison's spirituality proved to be all-consuming. When he died in Los Angeles in 2001, his wife Olivia and son Dhani were at this bedside, as were Shankar and his wife Sukanya and daughter Anoushka. They were joined by Hare Krishna devotees Shyamsundar Das and Mukunda Goswami, who chanted from verses of the Bhagavad Gita. In a final statement, Harrison entreated citizens of the world to begin their search for enlightenment, saying that "everything else can wait, but the search for God cannot wait, and love one another." In keeping with the Hindu tradition, Harrison's ashes were later scattered in India along the Ganges and Yamuna rivers.

For Harrison, a boyhood sense of religious skepticism would translate into the search of a lifetime for spiritual enlightenment. And in the end, he left the world with vast reservoirs of love—both in his music and his steadfast devotion to finding pure consciousness and religious transcendence.