What planet is NATO living on? Because it's no longer useful on this one

U.S.-ruled alliance founded to fight communism has long outlived its usefulness, and is now a dangerous war machine 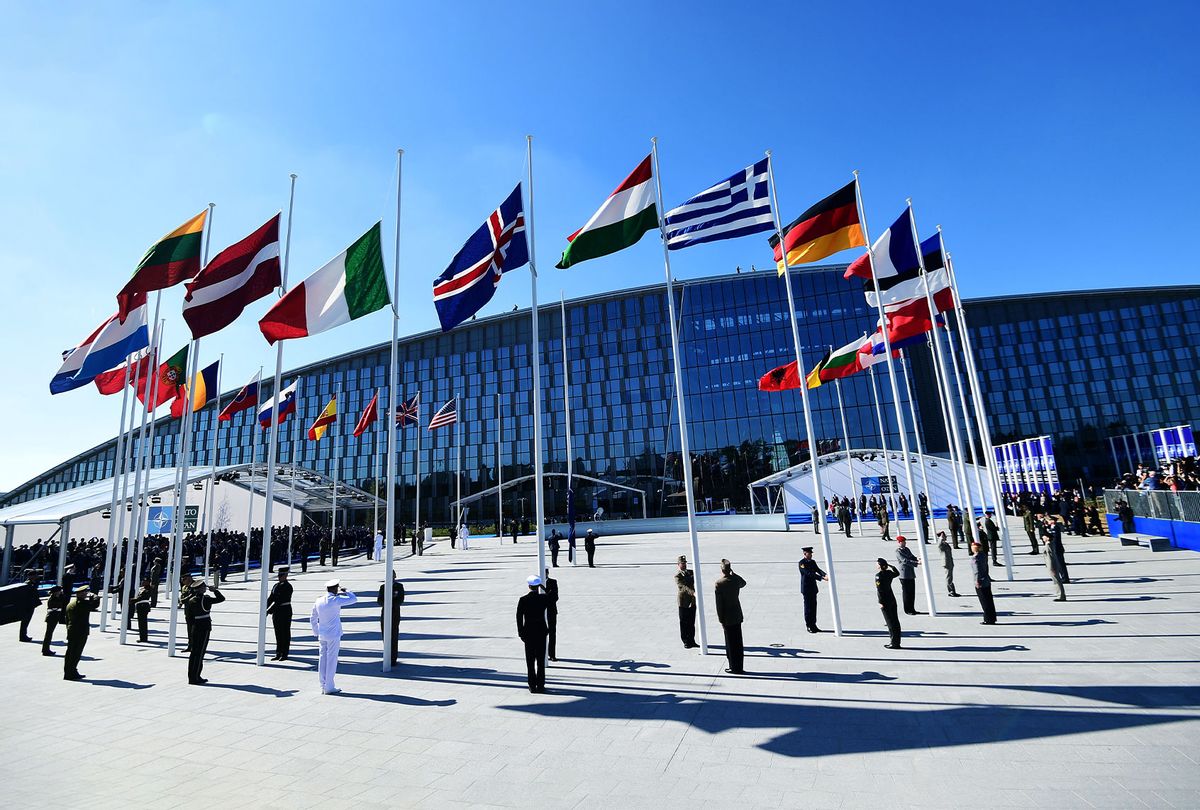 Officials and military personnel stand beneath flags as they attend the NATO (North Atlantic Treaty Organization) summit ceremony at the NATO headquarters, in Brussels (EMMANUEL DUNAND/AFP via Getty Images)
--

This theme was emphasized by U.S. Secretary of Defense Lloyd Austin in a Washington Post op-ed in advance of the NATO meeting, insisting that "aggressive and coercive behaviors from emboldened strategic competitors such as China and Russia reinforce our belief in collective security."

Using Russia and China to justify more Western military buildup is a key element in the alliance's new "Strategic Concept," called "NATO 2030: United For a New Era," which is intended to define its role in the world for the next 10 years.

NATO was founded in 1949 by the United States and 11 other Western nations to confront the Soviet Union and the rise of communism in Europe. Since the end of the Cold War, it has grown to 30 countries, expanding to incorporate most of Eastern Europe, and it now has a long and persistent history of illegal war-making, bombing civilians and other war crimes.

In 1999, NATO launched a war without UN approval to separate Kosovo from Serbia. Its illegal airstrikes during the Kosovo war killed hundreds of civilians, and its close ally, Kosovo President Hashim Thaci, is now on trial for war crimes committed under cover of the NATO bombing campaign.

Far from the North Atlantic, NATO has fought alongside the United States in Afghanistan since 2001, and attacked Libya in 2011, leaving behind a failed state and triggering a massive refugee crisis.

The first phase of NATO's new Strategic Concept review is called the NATO 2030 Reflection Group report. That sounds encouraging, since NATO obviously and urgently needs to reflect on its bloody history. Why does an organization nominally dedicated to deterring war and preserving peace keep starting wars, killing thousands of people and leaving countries around the world mired in violence, chaos and poverty?

Unfortunately, this kind of introspection is not what NATO means by "reflection." The Reflection Group instead applauds NATO as "history's most successful military alliance," and seems to have taken a leaf from the Obama playbook by only "looking forward," as it charges into a new decade of military confrontation with its blinders firmly in place.

NATO's role in the "new" Cold War is really a reversion to its old role in the original Cold War. This is instructive, as it unearths the ugly reasons why the United States decided to create NATO in the first place, and exposes them for a new generation of Americans and Europeans to examine in the context of today's world.

Any U.S. war with the Soviet Union or Russia was always going to put Europeans directly on the front lines as both combatants and mass-casualty victims. The primary function of NATO is to ensure that the people of Europe continue to play these assigned roles in America's war plans.

As Michael Klare explains in a NATO Watch report on NATO 2030, every step the U.S. is taking with NATO is "intended to integrate it into U.S. plans to fight and defeat China and Russia in all-out warfare."

The U.S. Army's plan for an invasion of Russia, which is euphemistically called "The U.S. Army in Multi-Domain Operations," begins with missile and artillery bombardments of Russian command centers and defensive forces, followed by an invasion by armored forces to occupy key areas and sites until Russia surrenders.

Unsurprisingly, Russia's defense strategy in the face of such an existential threat would not be to surrender, but to retaliate against the United States and its allies with nuclear weapons.

U.S. war plans for an assault on China are similar, involving missiles fired from ships and bases in the Pacific. China has not been as public about its defense plans, but if its existence and independence were threatened, it too would probably use nuclear weapons, as indeed the United States would if the positions were reversed. But they're not — since no other country has the offensive war machine it would need to invade the United States.

Michael Klare concludes that NATO 2030 "commits all alliance members to a costly, all-consuming military competition with Russia and China that will expose them to an ever-increasing risk of nuclear war."

So how do the European people feel about their role in America's war plans? The European Council on Foreign Relations recently conducted an in-depth poll of 15,000 people in 10 NATO countries and Sweden, and published the results in a report titled "The Crisis of American Power: How Europeans See Biden's America."

The report reveals that a large majority of Europeans want no part in a U.S. war with Russia or China and want to remain neutral. Only 22% would support taking the U.S. side in a war with China, 23% in a war with Russia. So European public opinion is squarely at odds with NATO's role in America's war plans.

On trans-Atlantic relations in general, majorities in most European countries see the U.S. political system as broken and their own countries' politics as in healthier shape. Fifty-nine percent of Europeans believe that China will be more powerful than the United States within a decade, and most see Germany as a more important partner and international leader than the U.S.

Only 17% of Europeans want closer economic ties with the U.S., while even fewer, 10% of French and Germans, think their countries need America's help with their national defense.

Biden's election has not changed Europeans' views very much from a previous survey in 2019, because they see Trumpism as a symptom of deeply rooted and long-standing problems in American society. As the writers conclude, "A majority of Europeans doubt that Biden can put Humpty Dumpty back together again."

There is also pushback among Europeans to NATO's demand that members should spend 2 percent of their gross domestic products on defense, an arbitrary goal that only 10 of the 30 members have met. Ironically, some states will reach the NATO target without raising their military spending because COVID has shrunk their GDPs, but NATO members struggling economically are unlikely to prioritize military spending.

The schism between NATO's hostility and Europe's economic interests runs deeper than just military spending. While the United States and NATO see Russia and China primarily as threats, European businesses view them as key partners. In 2020, China supplanted the U.S. as the EU's No. 1 trading partner and at the close of 2020 the EU concluded a comprehensive investment agreement with China, despite U.S. concerns.

European countries also have their own economic relations with Russia. Germany remains committed to the Nord Stream 2 pipeline, a 746-mile natural gas artery that runs from northern Russia to Germany, even as the Biden administration calls it a "bad deal" and claims it will make Europe vulnerable to Russian "treachery."

NATO seems oblivious to the changing dynamics of today's world, as if it were living on a different planet. Its one-sided Reflection Group report cites Russia's violation of international law in Crimea as a principal cause of deteriorating relations with the West, and insists that Russia must "return to full compliance with international law." But it ignores the U.S. and NATO's far more numerous violations of international law and leading role in the tensions fueling the renewed Cold War:

NATO's failure to seriously examine its own role in what it euphemistically calls "uncertain times" should be more alarming to Americans and Europeans than its one-sided criticisms of Russia and China, whose contributions to the uncertainty of our times pale by comparison.

The short-sighted preservation and expansion of NATO for a whole generation after the dissolution of the Soviet Union and the end of the Cold War has tragically set the stage for the renewal of those hostilities — or has perhaps made their revival inevitable.

NATO's Reflection Group justifies and promotes the U.S. and NATO's renewed cold war by filling its report with dangerously one-sided threat analysis. A more honest and balanced review of the dangers facing the world and NATO's role in them would lead to a much simpler plan for NATO's future: It should be dissolved and dismantled as quickly as possible.