The power of self-publishing in food media

Food writers and recipe developers go rogue with newsletters, videos and more — but have we seen this story before? 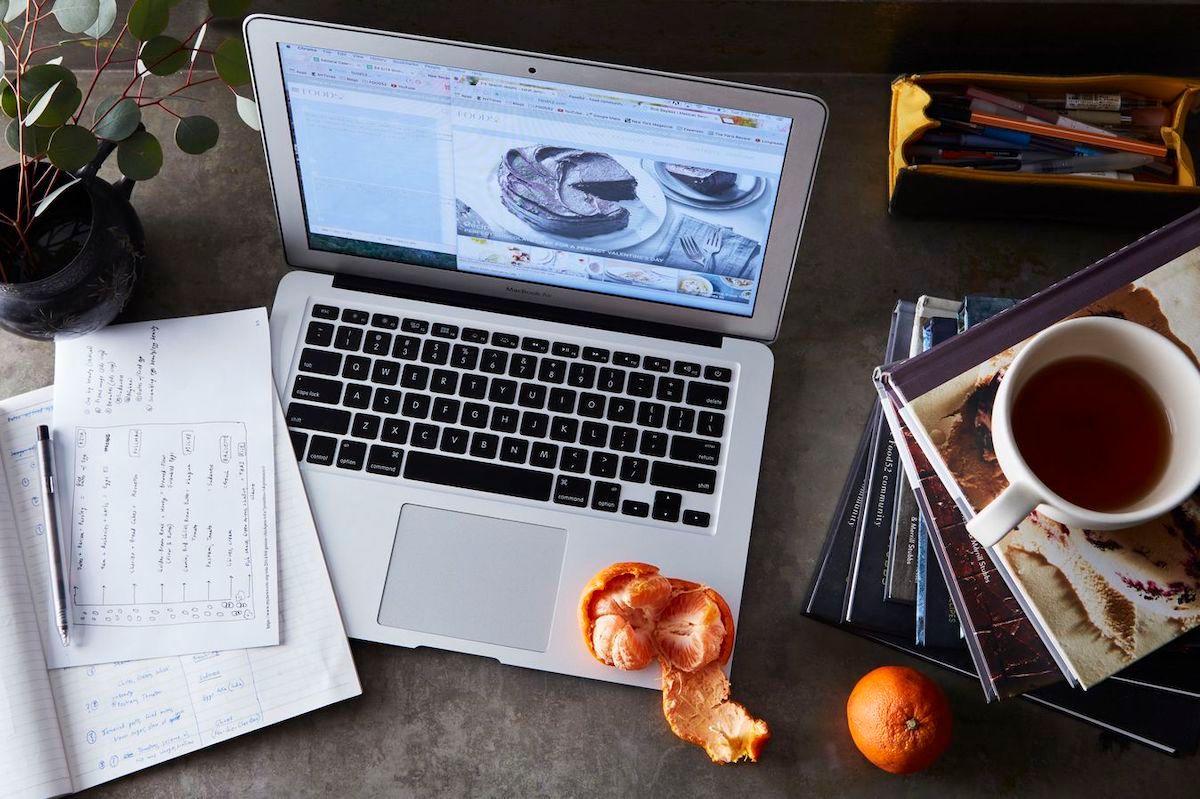 At the beginning of 2020, Alicia Kennedy saw her freelance income evaporate almost overnight: An anchoring contributing editor job was discontinued, and her wages at a contributing writer position were reduced. She had been toying with the idea of starting a newsletter—one that might offer readers something more substantial than an abandoned TinyLetter newsletter she enjoyed years back. So she began writing From the Desk of Alicia Kennedy, her weekly dispatch on food, politics, media, and other musings, and less than one year later, the newsletter is second-most popular in the food category on the publishing platform Substack. With around 1,700 paid subscribers (and another 13,000 who opt for the free version), it has become Kennedy's main source of income.

As more food writers and recipe developers become fed up with traditional outlets, both food media "celebrities" (those with highly bankable followings in the hundreds of thousands) and freelancers like Kennedy, who felt there were too few opportunities for her work, are finding success in publishing content in newsletters and through other independent channels. Kennedy, whose newsletter often covers climate change and labor practices, was finding many outlets felt this work "complicated" or politicized the conversation around food: "I felt like I couldn't say anything of any significance in them," she said in a phone interview recently.

The boom in newsletters as an alternative to established media has been well documented, with Substack emerging as a key player. A couple decades ago, a similar disregard for legacy publications propelled a burst of creative energy resulting in the "blogosphere" of the 2000s. In fact, in 2010 I sat on a panel alongside then-year-old blog Food52's founders, Amanda Hesser and Merrill Stubbs; Ed Levine, of Serious Eats (also then a relatively young blog); and Julie Powell (of "Julie & Julia" fame) that explored how self-publishing platforms freed writers from the demands of industry gatekeepers, and how it was seen as disrupting the system. While some media veterans found blogs a meaningful avenue for expression and income, they were more associated with making the careers of food personalities who rose from obscurity, like Ree Drummond of The Pioneer Woman, Molly Yeh of My Name is Yeh, and Deb Perelman of Smitten Kitchen, who parlayed their writing and recipes into lucrative careers within those original mainstream media channels, like cookbooks, columns, and TV shows. Personal blogs not only challenged a sleepy traditional media that felt behind the times, but they democratized it — after all, anyone could start a blog.

By contrast, today's self-publishing trend is filled with writers who've left or were let go from high-profile positions — like former New York Times columnist and cookbook author Alison Roman, whose newsletter (which has a free and paid subscription option, with all profits donated) currently holds the number one spot among food and drink newsletters on Substack. Molly Baz and Carla Lalli Music, both of whom recently left staff jobs and lucrative video contracts at Bon Appétit and Condé Nast Entertainment, offer a paid content subscription through another platform, Patreon, that includes a newsletter plus recipes and videos. (Baz also sells merch via her website.) In other words, self-publishing has become a haven for escapees of traditional media.

At least, that's how it looks for now.

"It just feels pure. I don't feel like there's an algorithm that's skewing [newsletters] yet, like with social media," says Nichelle Stephens, a social media consultant who co-founded the food blogging conference TECHmunch. Stephens says that platforms like Instagram now occupy a similar hyper-polished, often sponsor-driven space as many food blogs, effectively leaving a vacuum for more unfiltered content in its wake.

Lukas Volger, a cookbook author and co-founder of the biannual independent food magazine Jarry, agrees that newsletters feel more "pure" compared to social media. "Instagram is a visual medium, and then they have this algorithm that dictates who gets to see your work," he says. "The newsletter eliminates that uncertainty." He has written a free newsletter for two years — well before the current craze — in addition to his other freelance work. Subscription is free; he uses it as a way to keep in touch with readers.

Having an authentic interaction with readers is also partly what drew cookbook author Cathy Barrow to start her newsletter, Cook Garden Knit Repeat, this January after a decade of writing a food column for The Washington Post. The newsletter allows her to broaden her scope from just churning out recipes for The Post, incorporating her interests in gardening and knitting — as she puts it, "all of her" — and it's a familiar style of writing; like Drummond, Yeh, and Perelman, Barrow credits her (now-defunct) blog, Mrs. Wheelbarrow's Kitchen, with helping launch her cookbook career. "I keep saying to people, isn't it a blog?" Barrow says, of the newsletter trend.

In spite of varying reasons for launching newsletters and other direct-to-consumer food content, the fact that today's zeitgeist is flush with veteran creators on their umpteenth medium (video! podcasts!) may belie their significance. A newsletter or YouTube channel are not typically the only platform used — Kennedy is working on her first book, as are Baz and Illyanna Maisonet, another exciting name in the newsletter space (she used to write a cooking column for The San Francisco Chronicle). Claire Saffitz (also of Bon Appétit fame) published her first book just before launching her YouTube channel. Roman (who also just relaunched a YouTube channel), Lalli Music, Volger, and Barrow are all working on books as well. Any following garnered from these independent projects will surely benefit their book sales, or so the traditional logic goes.

Other veteran food writers are creating spaces for the kind of content they want to work on by launching independent print magazines. Cookbook author Klancy Miller just published the first issue of For the Culture, a quarterly focused on Black women in food, funded through an Indiegogo campaign. Whetstone Magazine, co-founded in 2017 by food writer Stephen Satterfield and former chef Melissa Shi, has expanded into a multimedia company that produces an online journal and podcast in addition to a print magazine; Peddler Journal, a print biannual magazine with an accompanying podcast, launched the same year, the brainchild of cookbook author Hetty McKinnon. What unites these projects — as well as Jarry, which has explored the intersections of food and queer culture since 2015 — is their dedication to seeing food through more diverse perspectives. "When the gatekeepers are diverse, so too are the stories," reads Whetstone's website.

These print projects, paid newsletters, and platforms like Patreon return to subscriptions-based revenue rather than advertising. Sponsored content has also become a major monetization method in social media and independent food blogs, as well as at legacy food publications, which are producing more and more sponsored content to stay afloat. In favoring a more transparent transaction between creator and consumer via subscription, many creators of print magazines and direct-to-consumer digital food media continue to challenge the status quo.

Hoping to take advantage of the trend, legacy media publications are looking to increase their presence in newsletters and the like.

Daniela Galarza, a food editor and writer, was hired by The Washington Post last year to create a food newsletter, which launched this month. She says it's part of a big push for newsletters throughout the paper's sections.

"I think the main difference is that it'll be more edited, maybe not as off the cuff as some newsletters," says Galarza of the upcoming newsletter, which will go out to subscribers four times a week — significantly more often than independent ventures — and include a recipe. While Galarza says she is free to choose the food topics it will cover, she learned early on that any mention of political preference is taboo. This is standard ethics for newspapers, but the revelation was somewhat jarring to her all the same: What she loves about newsletters is that they feel like a genuine personal letter.

"I remember spending a lot of time crafting emails to my really good friends and people who lived far away," says Galarza. "I think it's a craft that I want to see come back, and this is a form of it coming back."

Still, the "off the cuff" feel of many newsletters belies the amount of work that actually goes into them. While Kennedy never imagined a weekly newsletter would become her main source of income while she worked on her book, now that it has, she dedicates two full days a week to the project. It's still better, she says, than the freelancer-publisher dance of pitching, writing, editing, and, of course, waiting for payment.

"I'm working less and working harder in a way that's more enjoyable, writing about whatever it is I want," says Kennedy.

Whether it's here to stay — and stay "pure" — or not, today's zeal for independent food content, especially newsletters, proves that heartfelt writing, from unfiltered voices working outside of a highly manipulated media system, are perhaps more necessary to keeping food media alive than ever before.

And, maybe, they're just fun. Max Falkowitz, another veteran food writer and food editor, now freelance, recently began a Substack newsletter to share his adventures in tending to his bonsai tree garden. He says it's helped him write regularly through the pandemic.

Explaining the new project to his followers on Twitter recently, he wrote: "I want to drum up 2007 blog energy for it."